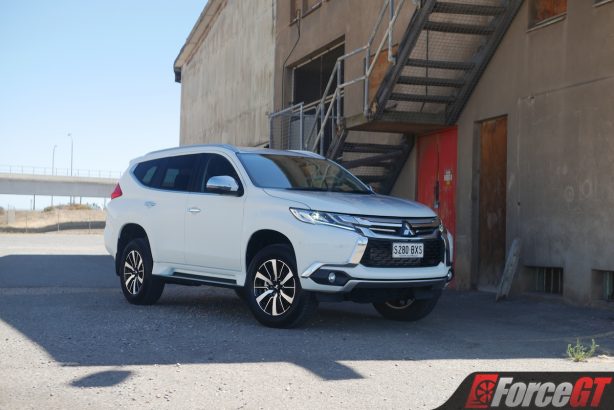 The Mitsubishi Pajero Sport is the Japanese marque’s entry-level off-roader, sitting below the ageing flagship Pajero and above the on-road-focused Outlander in the company’s lineup.

First launched in 2016 as a replacement for the Challenger, the Pajero Sport is based on the underpinnings of the Triton ute, and shares its 2.4-litre diesel engine with the Triton, too. It also set the tone for Mitsubishi’s new design language which has since evolved slightly into what’s seen on the front of the Eclipse Cross and facelifted Triton.

The Pajero Sport range encompasses three trim levels – GLX, GLS, and Exceed – with the former two available as five-seaters, while the GLS is also available with seven seats. The flagship Exceed tested here is available as a seven-seater only. 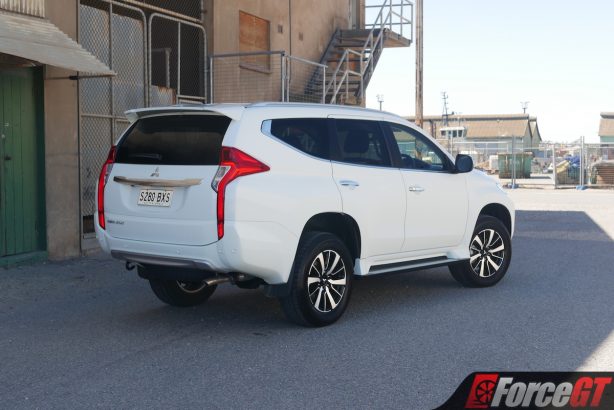 The Pajero Sport was most recently updated for the 2018 model year, with a few minor tweaks across the range to keep it feeling fresh. Most notably, forward collision mitigation and adaptive cruise control have been made standard across the range, bolstering the model’s safety credentials.

Looks-wise, our Exceed tester has gained a new rear lip spoiler to help set it apart from the rest of the range, while entry-level GLX variants now sport 18-inch wheels as standard. 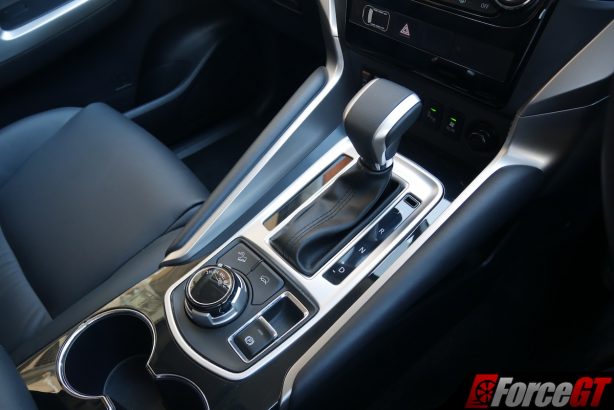 Also worth noting is that a limited-run Black Edition variant of the middling GLS seven-seater is currently available for 2019, with only visual changes that include a nudge bar and blacked-out trim and wheels. 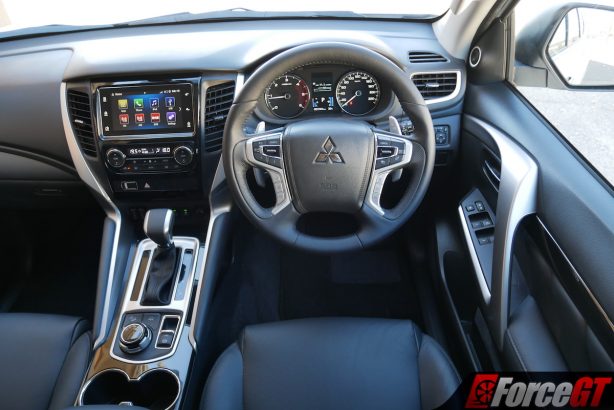 What stays the same?

Other than these few minor changes, few of which are particularly visible, all remains largely the same as the Pajero Sport enters 2019. In the styling department, at least, it isn’t such a bad thing, as the Pajero Sport’s forward-thinking and once-unique looks now help it blend in with the wider Mitsubishi range as more models adopt the same front-end styling.

On the inside, however, it does show a few signs of its age, as it lacks items such as an integrated satellite navigation system or a digital speedometer, although it does at least offer Apple CarPlay and Android Auto on its seven-inch infotainment screen to make up for it. 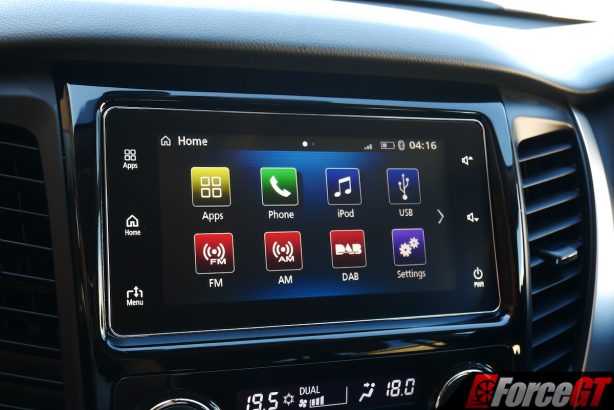 The steering wheel has a bit of a cluttered look to it as well, with far too complex an array of buttons. The set of column-mounted paddle shifters behind it are a nice touch though.

Cabin comfort is a strong point though, particularly for front-seat occupants. The ruched leather seats up front are incredibly supportive, with particularly commendable shoulder bolstering – something that definitely stands out. They offer two-stage heating as well, and were they to offer adjustable lumbar support, I’d be giving them full marks.

That said, the cabin can feel a little cramped up front for those who are longer in the leg, although the new soft padding on the side of the surprisingly high centre console does account for it. 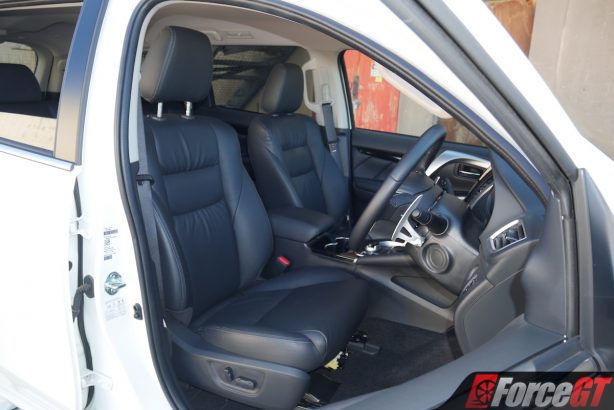 One nice touch are the softly-padded and leather-wrapped armrests and door card trim on both the front and rear doors. Speaking of the rear, there’s good space for second-row occupants, as is to be expected. As for the third-row seats, it’s worth noting that the operation of them is somewhat fiddly, with the back needing to be raised before the base can be flipped down, which is a bit of a reach to do. An all-in-one solution like most rivals offer there would be a good improvement.

While there’s some good hidden storage in the boot floor, it should also be noted that it could do with some more in-cabin storage, as a second glovebox and a tray for your phone below the centre stack would certainly be worthwhile additions. 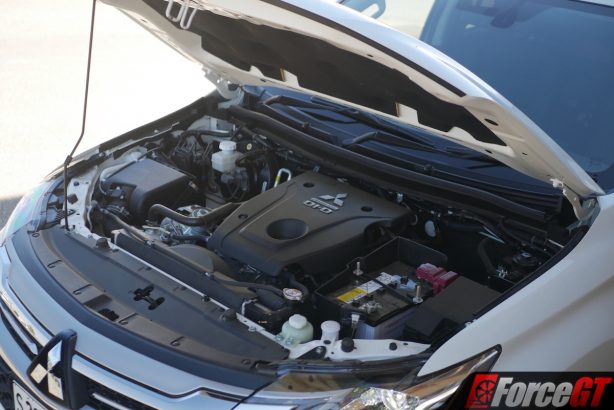 Under the bonnet of all Pajero Sport variants is a 2.4-litre four-cylinder turbo diesel, with outputs of 133kW and 430Nm, which puts it right on par with rivals like the Isuzu MU-X. The only transmission available is an eight-speed torque converter automatic with a set of column-mounted paddle shifters that stands out in the segment.

Fuel consumption for the seven-seat Exceed is claimed at 8.0L/100km, and we saw an indicated return of 10.4L/100km over the course of nearly 500km of evenly-mixed city, country, off-road, and spirited driving – a fair bit over Mitsubishi’s claims.

All models sport Mitsubishi’s Super Select II 4WD system, that offers both on-road and off-road four-wheel drive modes selected via a dial on the centre console, that works in tandem with the Off-Road Terrain Control System to aid with driving on a variety of challenging surfaces. A locking centre differential is standard, while GLS and Exceed models also receive a rear diff lock. 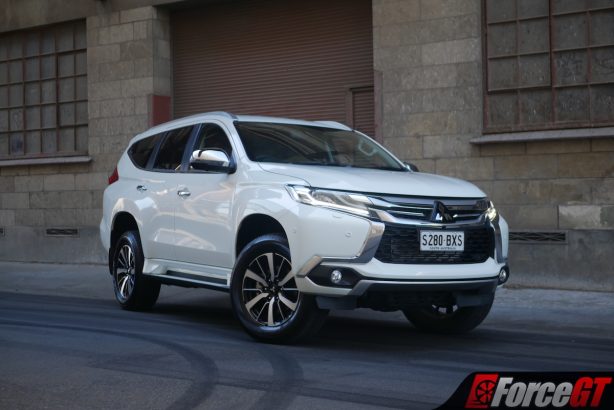 Quite surprising is how well the Pajero Sport drives, as it stands out as one of the best handling models in the class. Despite only working with the same suspension setup as most rivals – independent double wishbone front, coil-sprung live-axle rear – it manages to remain a lot flatter through the bends than many other body-on-frame 4x4s.

That’s not to say that there isn’t any body roll, as some is to be expected in a car tipping the scales at 2.1 tonnes, but what there is it manages well. Naturally, the steering isn’t quite as quick as you’d find in something smaller, but its far from unresponsive, and the handling package as a whole works.

Where it does suffer slightly is in its ride quality, as imperfections on sealed roads are felt far more prominently than in some rivals like the Isuzu MU-X. It’s far from uncomfortable, but it could manage big hits over potholes better than it does. Thankfully, it rides a lot better on unsealed surfaces, but we’ll touch on that in a moment…

The refinement of the Pajero Sport’s drivetrain is commendable, however. While the 2.4-litre oiler may sound gruff at low revs, it remains fairly muted on the cruise, and it, along with the slick eight-speed auto ‘box, work together incredibly smoothly. It could, perhaps, do with a little more power at times, but performance isn’t a particular focus of a car like this, obviously.

It offering both rear-wheel drive and four-wheel drive modes for use on sealed surfaces is a big positive as well, as throwing it into 4H on wet roads makes a big difference when it comes to grip and putting the power down effectively. 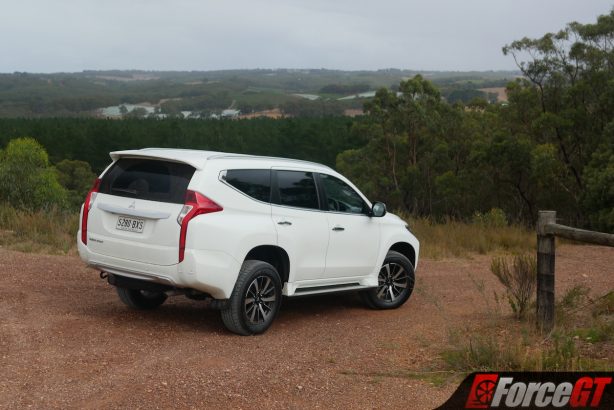 Thanks to its sophisticated four-wheel drive system with dual-range and other gizmos such as terrain selection and a locking rear differential, the Pajero Sport is plenty capable off-road, with it handling everything we threw it at well.

The ride on unsealed surfaces is particularly noteworthy, as it feels far smoother over gravel than it does on the tarmac. It absorbs larger bumps quite well, too, with it not beating you up over harsher terrain. 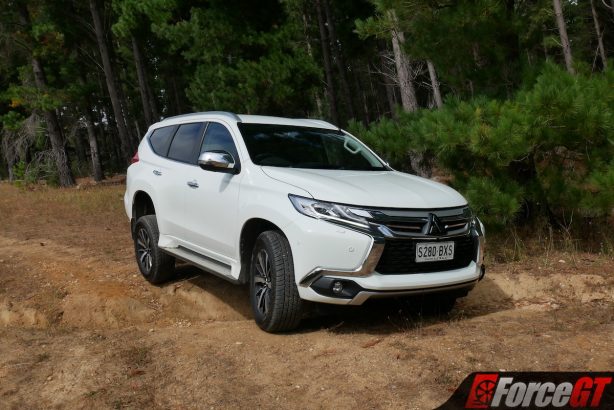 Its 218mm of ground clearance is enough to get the job done for most, although the hardcore off-roaders out there may want to consider raising the suspension height as we did clip the front tow-hook on one large bump when heading downhill, although the front bumper was certainly safe.

There’s a good amount of articulation from the coil-sprung rear axle, too, with it managing to keep all four wheels on the ground most of the time, although you’ll definitely experience some lift-off on more challenging terrain. It never seemed to struggle for traction at any point either, with it feeling confident in putting down the power in both high- and low-range. 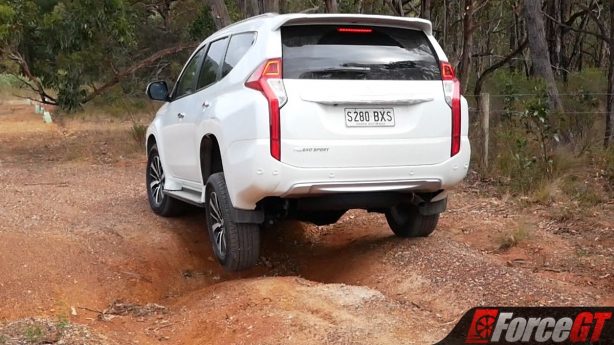 The Pajero Sport might not have changed much since we last tested it, but a few minor additions and improvements here and there have helped it keep up with the competition.

We like the nicer finishes and additional padding on the centre console, along with the handy USB ports in the rear and domestic plug in the centre console. However, we still think there’s some room for improvement, as integrated sat nav and a digital speedo are both items we’d like to see introduced.

The way the Pajero Sport drives continues to impress us, too, as does its off-road capability. Ultimately, it’s a lot of car for the money, even if it isn’t perfect, and it deserves a place on the shortlist of those in the market for a budget-friendly family hauler that can go just about anywhere.