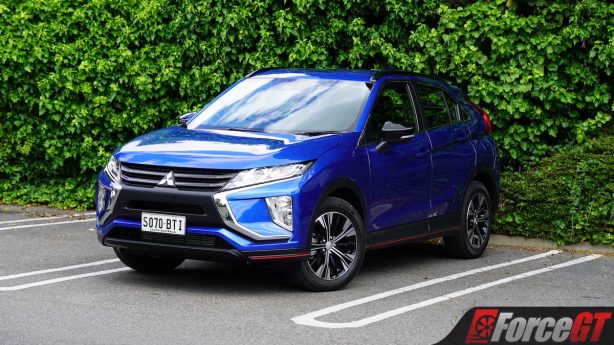 It’s only been a year since the Mitsubishi Eclipse Cross first landed, but the range has already been given a re-jig for 2019, with the notable addition of an all-new model grade – the ES, now positioned below the LS as the new tip-in point to the range.

To help shift a few units, there’s also a new limited-production Sport Edition model based on the new ES grade to grab people’s interest. Limited to 1,000 units – making it, rather strangely, more exclusive than a Ford GT – and priced at $1,000 more than the standard ES, it adds a few extra sporty visual touches, although enhanced performance isn’t part of the package.

We grabbed the keys to one of the thousand Sport Edition models in existence to see if the new base model loses too many niceties for our liking, and if this limited-run version feels special enough to justify the extra spend. 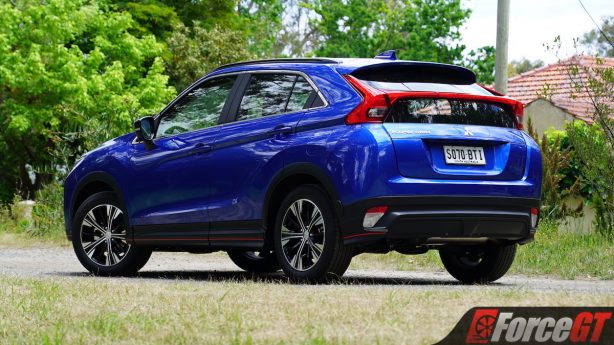 What does the ES lose?

To bring the cost of the new base-spec Eclipse Cross down to under $30k – that’d be $29,990 specifically – a few of the costlier convenience items of the LS model are done-away with.

Most notably, because it’s rather hard to miss, there’s now a manual handbrake sticking up out of the centre console which is rather awkwardly placed considering it was never originally intended to be stuck there. Keyless entry and push-button start are also gone – you’ll instead have to stick your key into the ignition barrel and turn it like in the good old days. It’s not a flippy key either, by the way, so the pointy end of it can become annoying as it sits in your pocket.

Radar-guided cruise control is another feature that has gone AWOL, as is the head-up display, meaning there’s no digital speedo and you’re stuck with just a mechanical dial, although it is nice and legible to make up for it, thankfully.

It also sports textured cloth seat upholstery in place of leather, although key contact points like the steering wheel and armrests are still leather-wrapped with contrasting stitching.

Thankfully, the seven-inch infotainment system with both a touchscreen and a Lexus-style touchpad controller – which is admittedly a bit irritating to use – still remains. Integrated satellite navigation is something unavailable on the ES, or indeed any model in the Eclipse Cross range. It does however, offer Apple CarPlay and Android Auto connectivity to compensate for it. Curiously, despite the lack of sat nav, the infotainment system will tell you what your precise GPS coordinates are, which will be useful to around one per cent of buyers, in my estimation.

Externally, the standard ES loses the glossy chrome exterior details of the LS and Exceed variants, utilising matte-finished plastic in its place. Otherwise, all remains the same, with the same 18-inch wheels still fitted, which do the best job of helping it look the part.

What does the Sport Edition bring to the party?

Admittedly, not a great deal is added for the extra $1,000 over the standard ES. All the minor enhancements it offers are all on the exterior – most notably, there’s a faux-carbon fibre ground effects kit added with some subtle red pinstriping.

Aside from that, the upper and lower sections of the grille and the wing mirror caps come finished in gloss black, but I’m afraid that’s where the list of upgrades ends. 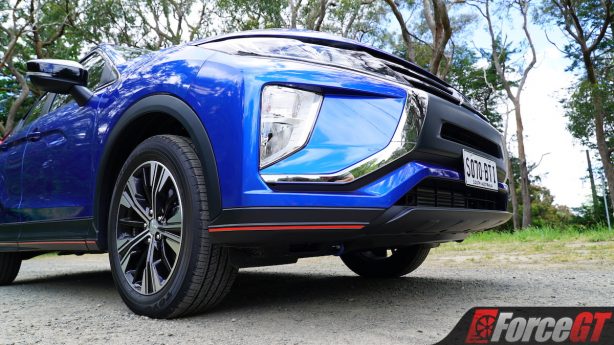 Unfortunately, there’s no badging on the exterior or any numbered plaques in the interior to let you or anyone else know you’re driving around in anything other than a normal Eclipse Cross, which is something that really should have been added to help justify the price premium.

Any extra performance is also absent from the Sport Edition, with it still sporting the same engine as the rest of the range. The suspension and steering setup remains identical, too.

Does it feel sporty enough or special enough to bear the name it does? No, not really, but we do at least like the look of it with these minor changes.

The ES and Sport Edition models run the same 1.5-litre turbocharged four-cylinder engine with both direct and port fuel injection that you’ll find in any other model in the range. Its outputs of 110kW and 250Nm, while not class leading, don’t leave it feeling underpowered either.

Backing this engine is a CVT with a simulated eight-speed manual mode controlled by a fantastic set of column-mounted paddle shifters lifted straight from the sadly departed Evo X – a car we still miss very dearly.

All ES, ES Sport Edition, and LS models are front-wheel drive exclusively, while the range-topping Exceed can still be had with all-wheel drive as an option. 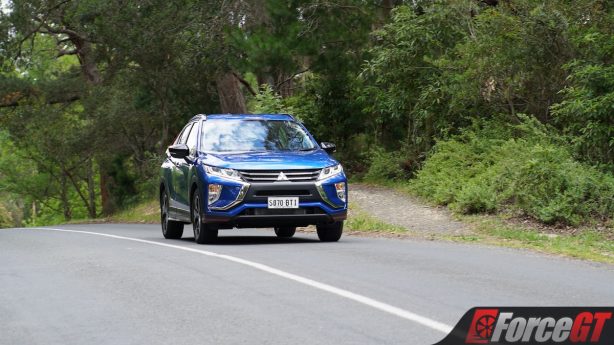 We’ve already shared our thoughts on the range-topping Exceed in both front-wheel drive and all-wheel drive form, and the ES Sport Edition feels no different to the former in the way it drives, due to offering the same power outputs and suspension setup.

The greatest highlight of the Eclipse Cross for us would have to be its punchy turbocharged engine, which always feels punchy and pretty eager to get going throughout the rev range. While a more conventional transmission backing it would really bring the best out of it, the CVT it’s paired to does feel well-calibrated when left to its own devices. When using the paddle shifters to manually switch between its eight simulated stepped ratios, it does slur upshifts a bit too much.

The greatest let down in regards to the way the Eclipse Cross drives is in its handling which leaves a little to be desired. The softly-sprung crossover suffers from a bad case of body roll through tighter bends which leads into understeer, although it does hold its line more confidently through longer sweeping bends. There’s also a certain vagueness to the steering on initial turn-in, although it does begin to feel more direct the further you turn. 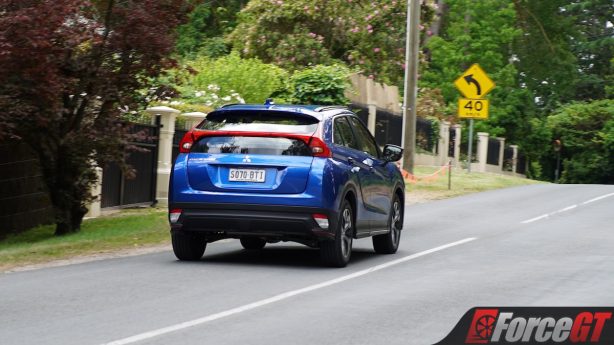 With all ES and ES Sport Edition models being front-wheel drive only, there is a noticeable amount of torque steer when you attack the throttle on the exit from a corner, further hampering its handling abilities.

However, its softened feeling does bode well around town, where its light steering and soft ride really come into play. It’s easy to manoeuvre and park, and it rides comfortably over most surfaces including speed bumps and corrugated surfaces, although it can be a bit too sharp over particularly bad potholes and the like. 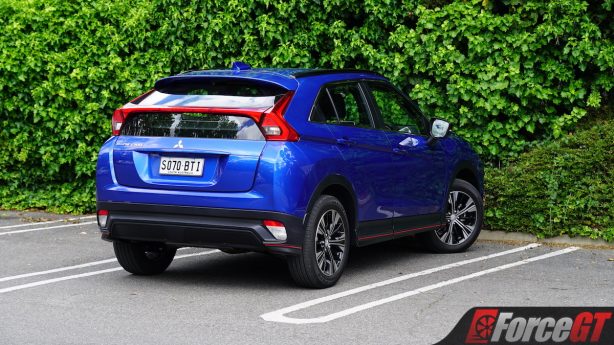 Will it be expensive to run?

Mitsubishi offers a competitive five-year warranty on all its vehicles sold in Australia including the Eclipse Cross, although it should be noted that it does have a 100,000km distance cap on it, unlike the unlimited mileage coverage offered by some rivals. Furthermore, complimentary roadside assistance coverage is only included for the first 12 months, not for the full duration of the warranty period.

The entire Mitsubishi range is offered with capped price servicing for the first three years or 45,000km, with the Eclipse Cross’ first three services costing $300, $400, and $400 respectively, with identical pricing for both front-wheel drive and all-wheel drive versions.

As for fuel consumption, front-wheel drive models like the ES are rated at 7.3L/100km, and we saw an indicated return of a respectable 8.6L/100km after 650km of mixed driving. It’s worth noting that you’ll get further on a tank in front-drive models as the lack of a rear differential allows for a larger 63 litre tank to be fitted, as opposed to a 60 litre tank in the range-topping all-wheel drive variant. 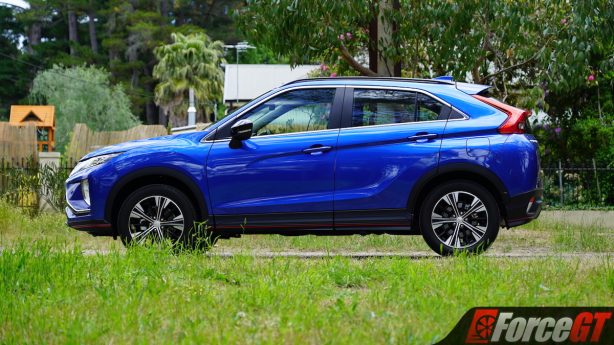 While the Eclipse Cross ES Sport Edition might look the part with its visual enhancements, the $1,000 premium it commands is a bit hard to justify for us, especially with it being merely a glorified base model.

However, the new standard ES version does present a compelling case for the Eclipse Cross to buyers who aren’t fussed by the lack of some minor convenience items like an electronic handbrake and push-button start, as it comes across as unpretentious and like a good value buy, especially as key features like its infotainment system and smart looks are still retained.

The $29,990 asking price for the standard ES casts this new variant in a pretty good light then, although we’d still suggest haggling for an even better drive-away deal if you can.