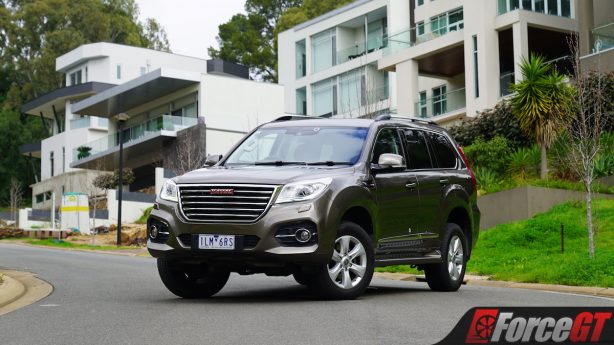 If you have no idea what you’re looking at right now, let me break it all down for you – this is the Haval H9, the flagship model from the world’s most powerful SUV manufacturer which shifted nearly 938,000 units globally last financial year alone.

The Chinese marque, which is a subsidiary of the more widely-known Great Wall, first landed Down Under in 2015 with a range of four SUVs – the baby H2, the more stylish H6, the larger H8, and this, the seven-seat H9, which looks a bit like the love child of a Toyota Prado and a Mercedes GL.

Despite the H9 being positioned by Haval itself as a rival to the ever-popular Prado, it’s priced more closely to entry level off-roaders like the Isuzu MU-X and Mitsubishi Pajero Sport while coming with more kit than the lot of them. 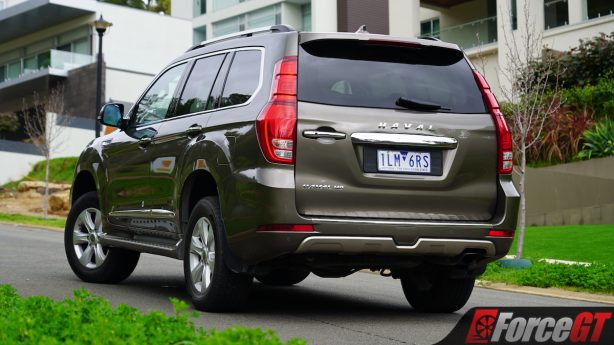 While many in Australia are still unfamiliar with Haval – which becomes rather clear when you look at the Aussie sales figures of just over 700 units in 2017 – I became familiar with the brand when I tested out the first incarnation of the H9 to hit our shores back in 2016 for a previous assignment.

However, since then, Haval has given the big bus a bit of a refresh for 2018, with tweaked front-end styling, sharpened pricing, and increased levels of standard equipment, particularly for the entry level model, so I thought it was worth revisiting to see if the improvements have made it a more worthy contender.

When the base model is badged as the Lux, you know that it must be well equipped and that’s certainly the case here, with a sunroof, a 10-speaker audio system, a new TFT screen in the gauge cluster, and safety kit that should have been in from the get go – blind-spot monitoring, rear cross traffic alert, and lane departure warning – all now standard fit. 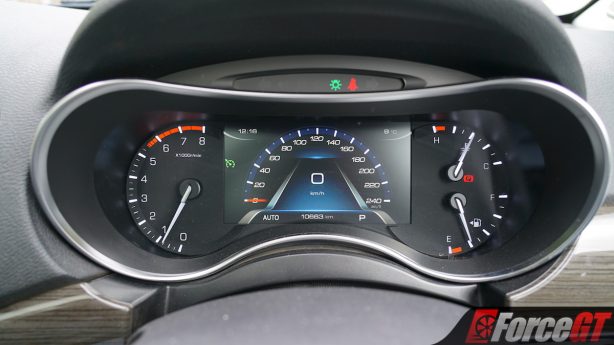 But it’s the range-topping Ultra that we’re taking a look at here, which is truly brimming with niceties. Leather-upholstered heated and ventilated seats in the front with two-stage massaging, heated seats for the second row, a heated steering wheel, panoramic sunroof, a bangin’ Infinity stereo, and power-folding third row seats all improve on what the base model already offers for just another four grand.

Consider just how many features it has and the $44,990 starting price for the H9 Ultra seems almost too good to be true – even more so with the current $45,990 drive-away offer. However, that might be because it’s not all quite what it’s cracked up to be.

While there’s no doubt that it’s far from lacking in the tech department, there’s not quite the air of quality you’d hope for on the inside. While the materials are all okay, they aren’t especially plush, and there is a lot of harder black plastic and an overabundance of nasty faux wood to contend with. 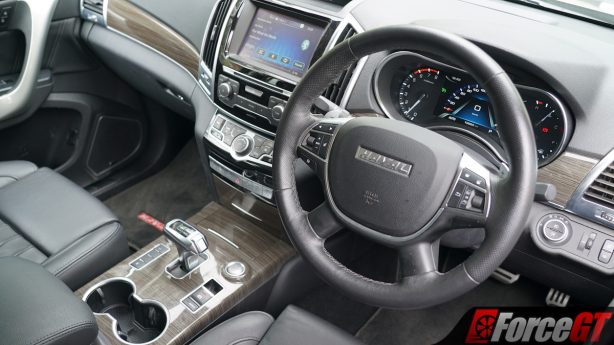 There were also a few rattles from the headlining in the rear – perhaps the cover for the panoramic sunroof – and from behind the dashboard as well. Peculiarly, however, no rattle was louder than that of the bonnet which shook around rather disconcertingly as you drove along. One of the fake vents tacked onto it didn’t sit quite flush either, and also shook around a tad.

The quality of the infotainment screen is very so-so as well as it, unfortunately, hasn’t been updated and still features two strange voices – one for the already infuriating sat nav system, which is a robotised male voice that sounds utterly depressed, and a female voice that sounds akin to a failing Margaret Thatcher impersonation asking you to “please select the parking mode” every single time you shift into reverse. It’s truly maddening.

The switchgear is also a bit of a mixed bag, with some pieces feeling a bit cheap and others feeling to be of a higher quality, and all of the labelling on them seems to be written in completely different fonts.

The same goes for the screens and dials too, which use some fonts that look quite modern and sleek, while others look dated and low res.

It’s far from the worst interior in the world, but it’s also far from the best. I think my main criticism would be that it doesn’t feel up to scratch for a $45K car and, personally, I would happily trade the massaging seats for some nicer materials and better build quality. 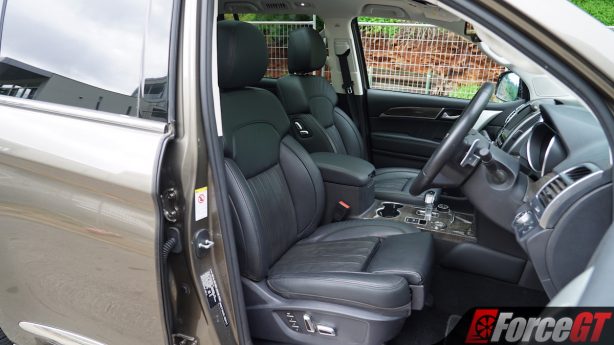 There is rather a clear answer as to why the interior doesn’t quite feel up to par, however, and that’s because the majority of your money is going on brand-name off-roading kit.

The automatic transmission is now an eight-speed unit from ZF, the transfer case is from BorgWarner, the locking rear differential is supplied by Eaton, and the electrics are provided by Bosch. There’s also an optional lift kit co-developed with Ironman 4×4, too.

It’s a good thing then that all of those bits work pretty well for the most part, and they all do their very best to make the H9 a nicer thing to drive. What really lets it all down, however, is the main piece that Haval itself has contributed to the puzzle – the engine.

If you were expecting a turbo diesel lump under the rattly bonnet, think again. As the Chinese market continues to resist diesel, what sits under there instead is a tiny little 2.0-litre turbocharged four-pot petrol that produces 180kW and 350Nm – up from 165kW and 324Nm. 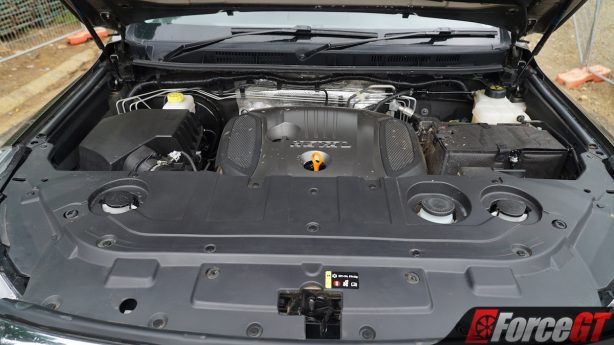 While decent outputs for an engine of this size, they simply aren’t enough to make progress easy in a vehicle tipping the scales at over 2.2 tonnes. Even with the power bump, the engine feels as though it’s straining constantly as it attempts to propel this big bus along.

It sounded a bit sickly too, with an odd whirring noise that was rev-dependent that could be heard clearly in the cabin.

At least the ZF eight-speed it’s paired to does a great job of swapping cogs, with gear changes all seamlessly smooth. 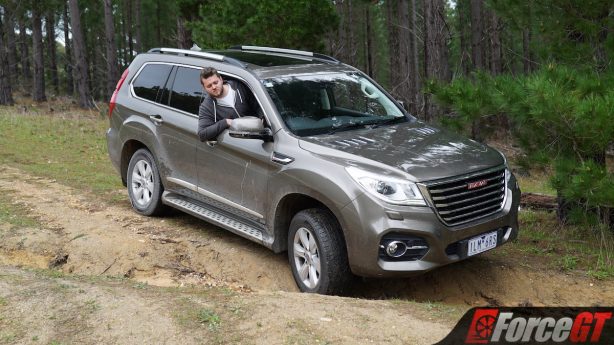 Off-road, the H9 really does shine. The lack of torque isn’t an issue for low-speed applications as what there is does come on low down in the rev range, and all the pricey brand-name stuff, as mentioned, really does the trick.

The diff lock is quick to activate and proves to be a big help at times, the full-time four-wheel drive system constantly sends the power to the right place, and the gear ratios of the auto box are all spot on.

What impressed us most, however, was the suspension, which ironed out a lot of the undulation on some of the rough tracks we took it on. It also had an impressive amount of travel. Take a look for yourself – on the shot below, the rear near-side wheel was only mere millimetres off the ground. 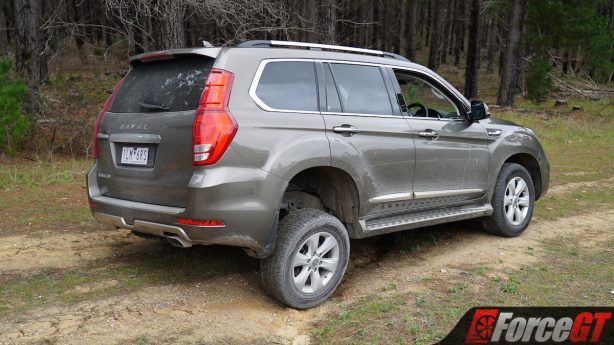 The new Kumho rubber – which is a million times better than the Cooper tyres of the old one – also fared pretty well, with only a little slip detected through water and particularly thick mud.

I wouldn’t worry too much about taking it through water though as it’s not really the H9’s best friend. Despite a claimed 700mm wading depth, we noticed electrical gremlins rearing their head after just a quick splash. 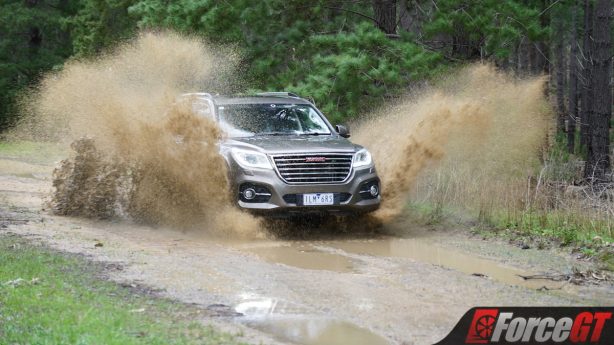 After taking the shot above – which, as you might have guessed, is always an incredibly fun one to do – we noticed the transmission missing the upshift from second to third under heavy load. After an hour or so, the issue ceased – presumably once the electrics had all dried out – but it’s not a good sign. From further investigation and reading others’ reviews of the H9, it sounds like our electrical issues were far from rare.

Otherwise, the H9 is a solid off-roader and certainly very capable, and it feels to be in its element most when roughing it.

On the road, however, it’s still lacking, even if there are improvements since the last iteration. While it handles alright on roads with longer sweeping bends, I’d avoid taking it to any tracks that are led to by tight, twisting roads as the body roll due to the H9’s heavy mass is immense. Thankfully the hydraulic power steering, while far from especially responsive, is at least less vague than in some other big off-roaders we’ve sampled recently. 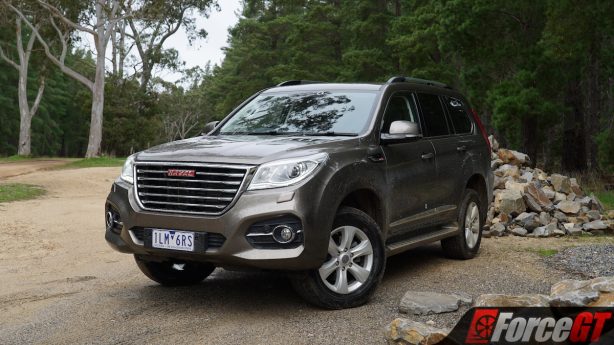 We also noticed a lot of hesitation off the line, and it wasn’t until the engine spun up to around 2,500rpm in first gear that it would actually start to set off with any determination. Trying to make a quick turn out into traffic is a bit of a risky exercise.

While there’s a bit more power to make proceedings easier, it’s still far from thrilling in a straight line. It’s thirsty too – we saw a tested 13.3L/100km consistently throughout our week with the H9 – as the four-pot is working mighty hard to shift this thing around, and I don’t doubt that with a larger, torquier engine, such as a V6 or a turbo diesel unit, you’d see equal if not better fuel economy.

It’s also hard to ignore the H9 still sports only a four-star ANCAP safety rating. However, since that rating was produced, Haval has added more active safety tech and strengthened the firewall, and a re-test is scheduled for later in the year once they’ve added AEB into the mix.

If you’re after gadgetry and niceties but don’t want to spend twice the average income on a car, the Haval H9 is worth a look in as there’s no doubt it offers an awful lot for the money.

However, you’ll end up paying the price for that in other areas, as the strained petrol engine, lacklustre build quality, and electrical gremlins leave it feeling behind the eight ball.

And while it is a decent performer off-road with the right stuff to get the job done, its on-road manners are still lacking somewhat.

However, it is still a definite improvement over the pre-facelift version, so Haval may well be one to watch if they can get the build quality up to par.