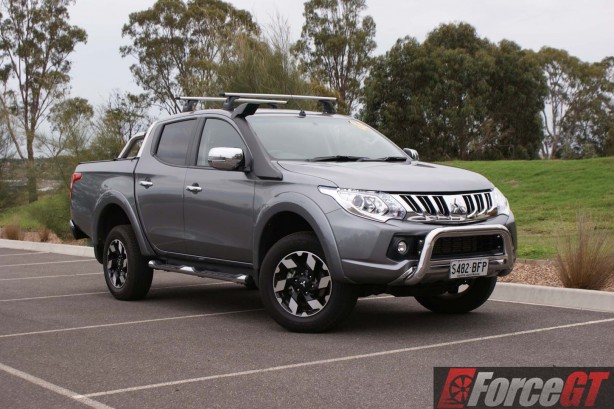 The next generation of Mitsubishi Triton has landed, sporting a sleek new look and revised powertrain designed to meet the needs of the tradesman’s work ute while also being a very capable family vehicle.

The Triton is quite possibly the most factory configurable vehicle on the market, the sheer number of genuine body style and factory extras offered make it adaptable to any job or environment.

For testing purposes we were given a 2016 Mitsubishi Triton GLS dual cab pickup. The vehicle starts at $40,990 plus on-roads, which is a fair bargain considering the equivalent Toyota HiLux comes in at $53,990. Out of the dual cab pickups available, the GLS comes as their mid range offering with the GLX being the base and the Exceed topping the range.

Showcasing the Triton’s factory configurability, Mitsubishi outfit our vehicle with an extensive list of extras including 17″ diamond alloy wheels, tow kit, tie down kit, snorkel and more. The vehicle is so configurable, that if for whatever reason you wanted to, it would be almost possible to option the GLS and make it almost indistinguishable from the Exceed variant. 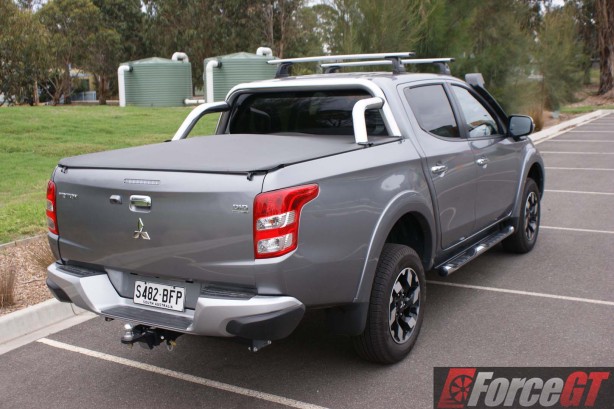 Even without all the extras, the base GLS comes pretty well decked out. Included as standard are bi-xenon headlights, LED daytime running lights, 17″ wheels, fog lights, sports bar, reversing camera, side steps and a 6.1-inch touchscreen infotainment system.

The side steps were definitely engineered well on the Triton. After testing many pickups, most of their sidesteps would deform heavily when stepped on leading us to believe they would struggle following regular abuse. Kudos to Mitsubishi engineers for getting it right, even under the weight of some heavier set gentlemen they remained solid with minimal deformation under load.

The bi-xenon headlights do wonders for visibility at night, the Triton is one of the few on the market offering it standard technology, however, we were surprised to find that there was no auto headlight functionality; a feature present on almost every new vehicle coming to market. 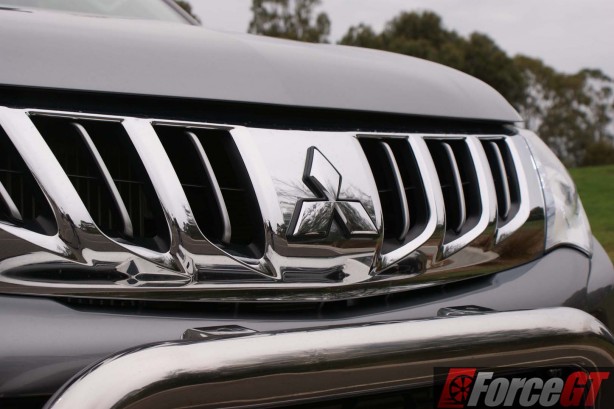 Up front the Triton gets a new wide chrome nose grille, some prefer the older design, however, I prefer the new grille as it’s more in-keeping with the models contemporary, modern look.

While the standard GLS does come with 17″ wheels, the diamond pattern 17″ wheels as fitted on our test model are actually an optional extra worth $1549.18. The very same wheels come standard on the Exceed variant. 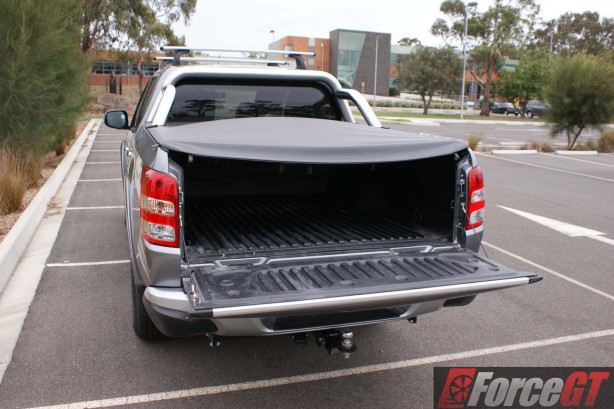 Our tester also had a soft tonneau cover and hard tub-liner installed for an extra $561.00 and $453.00 respectively. The tub-liner is incredibly durable and easy to clean. The soft cover is flawed; while it does keep most of the elements out, water pools around the Velcro straps and eventually leaks into the tub.

On sealed roads the Triton keeps its composure well. The refined suspension dampens most of the larger bumps and it’s generally pretty quiet inside. However, some wind noise is evident when traveling over 100km/h. Unladen, the vehicle can be bumpy, especially on rough unsealed roads around construction sites. Carrying cargo and placing the suspension under load would solve most of these minor issues.

The steering is quite effortless and feels very direct at most speeds, maneuvers such as 3-point turns or parking are very easy. The ute can also turn on a tight 11.8m radius which when compared to others in its class, comes out on top. 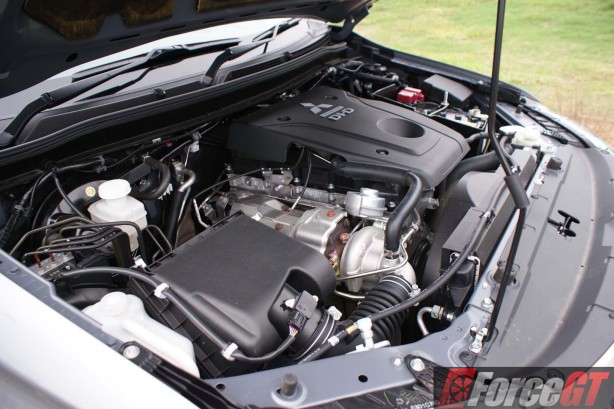 The GLS runs a 2.4-litre turbo-diesel MIVEC engine. While quieter than earlier generations, it is still one of the roughest engines on the market sending unwanted vibrations through the cabin while accelerating.

Typical with many turbo-diesel engines, it suffers from lack of low end torque making quick traffic maneuvers a slight gamble. 2,500rpm is the point where the lag drops off and peak torque of 430Nm is achieved.

The brakes lack feel at the top end, it almost felt like there was a certain amount of dead-zone before they actually began to bite. The brake system combines a front disk brake with a rear drum assembly. 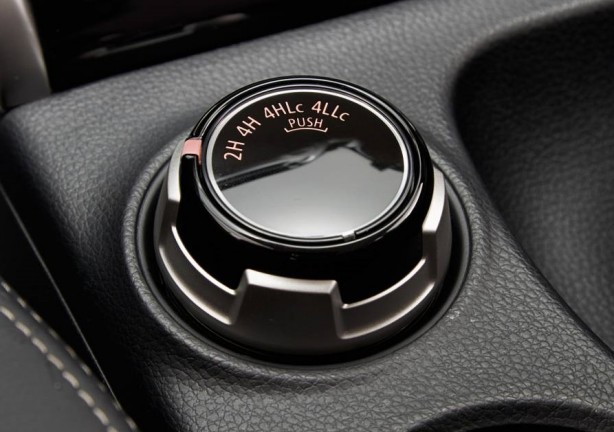 Unlike the engine, the gearbox is smooth and quick shifting and can be manually controlled via sequential shift.

The GLS and Exceed models also come with the brilliant Super Select 4WD system which is an improvement over the simpler easy select system provided on base GLX models. The new 4WD system allows easy switching between 2wd and 4wd while moving and lower gearing in the sub-transmission to improve its all-terrain performance in 4L mode. A 4th driving mode combines low gearing with a locked 4wd mode.

The pickup can tow up to a maximum of 3.1 tonne braked which is less than the 3.5-tonne benchmark. However, the tray is one of the best on the market, capable of carrying a payload of 750kg while also wide and long enough to fit most pallets. This is a major pitfall for most manufacturers who end up having wheel arches protrude into the tray which in turn restrict the usable space. 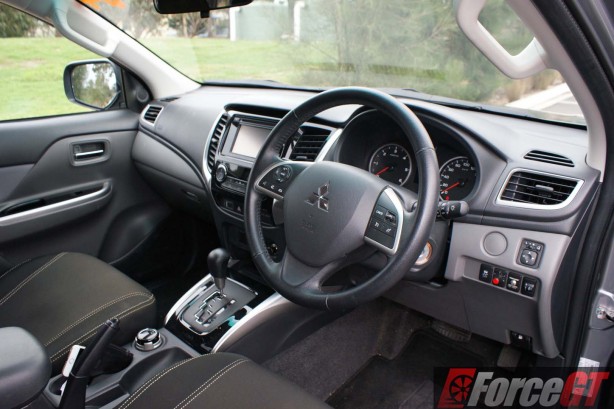 The interior has undergone a bit of a face-lift, it feels fresher than the outgoing generation despite the mix of hard dark grey plastics. The GLS and Exceed come a bit more upmarket than the GLX and below, with fabric inserts in the doors and small piano black plastics accenting the interior. The steering wheel and gear knob are both leather wrapped.

The seats were more comfortable than expected and paired with the telescopic adjustable steering, we could achieve the most comfortable seating position for regular long drives. Mitsubishi had also optioned neoprene seat covers. We found them to be rather irritating to sit on.

The backseat, while more accommodating than the Hilux, which suffered from a cramped rear, still lacks the necessary leg and headroom. Crewmen would find it difficult to sit for extended periods of time. 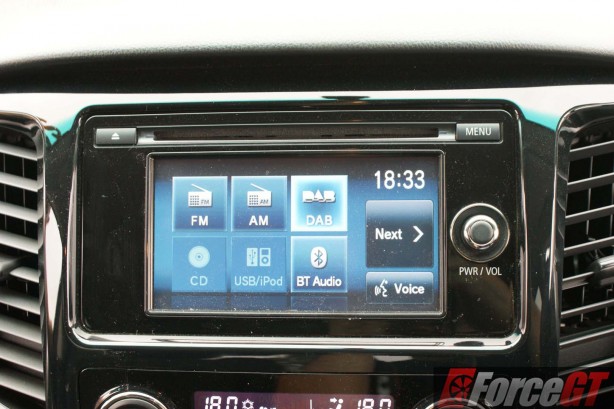 Standard on the GLS is the inclusion of a 6.1″ touchscreen multimedia system. While the unit is simple to use, it lacks one of the most important features for any work vehicle – GPS. We can understand its exclusion if it were a base spec Triton but the mid-range as a minimum should include it. It is worth noting however that the Exceed variant does include gps and the display has been upgraded to a 7″ unit. As an upside, the radio does support DAB+ and Bluetooth phone and audio streaming works flawlessly. 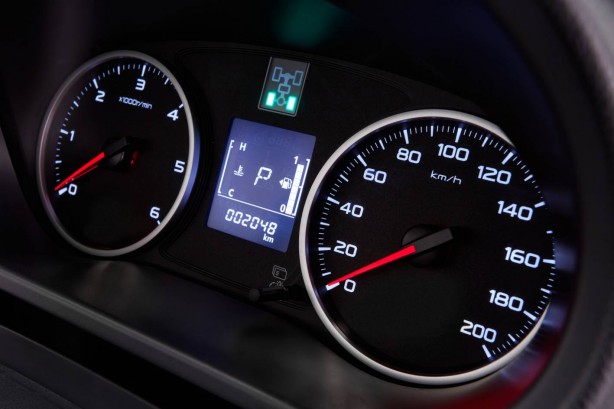 One of the biggest annoyances on the Triton was the green 4×4 indicator placed dead centre of the cluster. At night, this indicator is so bright that it becomes a distraction while driving. To further aggravate the situation, the indicator won’t dim when cluster lights are dimmed, so you get this extremely bright green light pointing at you at all times.

The new Triton features 7-airbags and a standard set of safety features such as traction control, ABS and a reversing camera. The new generation is also 5-star ANCAP rated.

The new Mitsubishi Triton is a sleek, refined pickup which has been built to a level of quality similar to that of passenger vehicles. While out of the gate it may be basic, the sheer number of factory extras allow it to fit any application. If you’re looking for a great all round vehicle for work or pleasure while not blowing the budget, it’s hard to look past the Mitsubishi Triton.