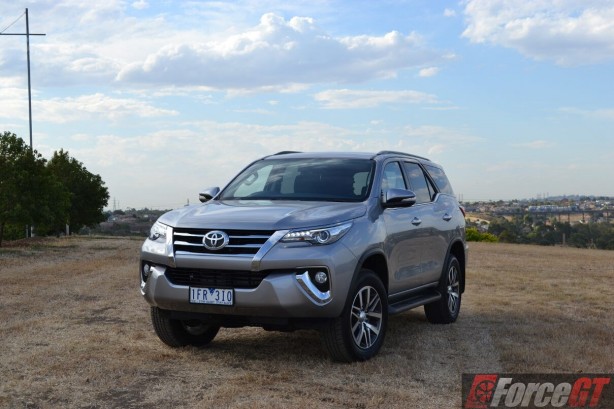 Marketed as an affordable heavy-duty 4WD, the 4Runner satisfied the needs of many adventure seekers, campers and surfers.

However, its stint Down Under was short lived, as Toyota decided to drop it from the local line-up and chose to import the plusher, more family-friendly Prado seven-seater SUV instead.

It was a decision well made, as the Prado went on to become Australia’s top-selling recreational vehicle. Being cheaper than the larger Land Cruiser yet packed with all the essential rugged running gear contributed to its success.

However, the Prado has grown in size and risen in price over the years, prompting Toyota, the biggest seller of SUVs in the country, the need to find a more affordable model, again.

So, after 2 decades of hiatus, Toyota is back in the ute-based SUV game with a new 4Runner, this time called the Fortuner.

Its name may have changed, but the formula is still the same – a high-riding, tough-going 4WD capable of the harshest terrain yet comfortable enough for school runs and trips to the mall. This time, there is even the bonus of seven-seats.

Compared to its forebear of the 90s, the Fortuner is slightly more expensive, with the three-tier range kicking off at $47,990 plus on-roads for the base GX, rising to $52,990 for the mid-range GXL, before topping off at $59,990 for the top-spec Crusade. 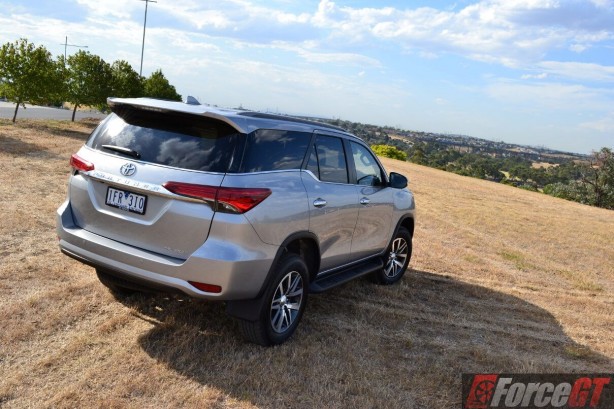 Despite sharing the same platform as the Hilux, the Fortuner looks distinctively different to its ute sibling. The design is less workhorse, more family SUV, and it looks good.

The front is especially menacing and tough, with a large upper grille framed by thick chrome plating that extends around the sleek projector headlights. The front bumper is aggressively styled with deeply recessed fog lamps positioned far out to emphasis the car’s width.

Between the flared front and rear wheel fenders, sculpted surfaces express refinement in the midst of toughness. The “floating roof” effect, provided by the blacked-out C-pillars, adds an air of lightness to the side profile.

At the back, the slender taillights and horizontal character lines help to conceal the Fortuner’s towering height and visual bulk. All grades have LED stop lamps.

Inside, the Fortuner is slightly more polished than the Hilux, but those seeking for a refined and premium interior should still look at the Prado.

There is seating for seven over three rows. Occupants of the two front rows will enjoy almost endless amount of headroom, while legroom is decent for the average height adult. The second row seating is split 60/40 and can slide forward and aft to make more room for the third row, which at best, is still a bit of a squeeze for adults. 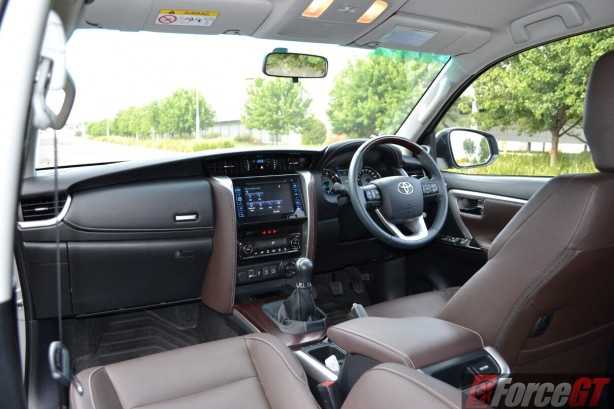 Thankfully, all seats are comfortable and supportive enough for long trips. The seats in GX and GXL grades are covered in durable brown fabric with contrasting stitching. Crusade offers the choice of either brown or fawn leather-accented coverings.

Storage compartments are deep and aplenty around the cabin, with the one below the centre armrest large enough for a water bottle. An air-conditioned compartment above the glovebox can be used to cool or warm items with the capacity for two 600ml bottles.

Our test example came equipped with the manual transmission and it didn’t take long for an impression to laid upon us that the drivetrain is tuned for durability and high torque more than anything.

Whether it’s tasked to haul, tow, climb or cruise, the diesel with its strong torque will do everything that you ask for. Turbo lag is almost non-existence, as it pulls hard without complaint to its 4500rpm redline. 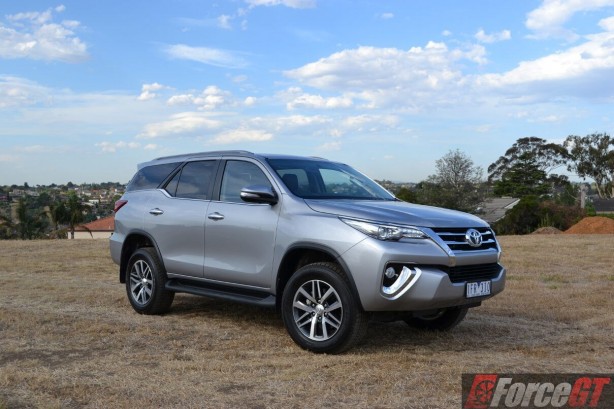 Though the diesel clatter is unashamedly vocal in the cabin, the engine does have a level of mechanical smoothness that we didn’t expect to find in a heavy-duty 4 x 4. A power button located behind the gear lever is anything but a gimmick, as it does add more shove to the proceedings when the going gets tough. It will also come in handy for overtaking.

The six-speed manual box is surprisingly slick and liveable, with none of the “roughness” normally found in proper off-roaders like the Fortuner. It’s paired with an equally easy clutch pedal with an almost spot on take-off point.

Elsewhere, the steering feels a little vague on centre, otherwise it’s nicely weighted and well suited for its application.

The Fortuner’s underpinnings have been extensively developed and tuned by Toyota’s Australian-based engineers to tackle the world’s harshest conditions. In fact, Toyota says the Fortuner is the largest single development program ever undertaken by the company’s local engineering arm, which had full global responsibility for the design of the SUV’s upper body, chassis, suspension and wiring harness.

And what an effort. The tough as nails Fortuner will go anywhere. The all-coil suspension – double-wishbone at the front and five-link coil-spring at the rear – serves up a surprisingly smooth ride on the road, yet tough enough to handle the unbeaten track.

Its high ground clearance, short wheelbase and short overhangs allow it to climb over rocks and crests, ascend and descend steep slopes, without knocking bits off its underbody. 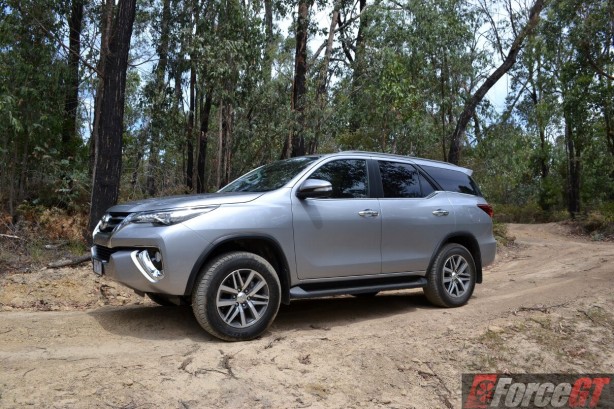 Toyota has a reputation of reliability to uphold and the Fortuner will lift that perception to greater heights. Everything in the Fortuner feels as if they will last forever.

The Fortuner had also undergone extensive testing in the Australian outback, home to some of the world’s toughest terrains and weather conditions. The local development team paid special attention to engine and transmission cooling performance in hot conditions and when towing.

Automatic models have a lightweight aluminium multi-plate transmission-fluid cooler built into the engine-coolant radiator, which is particularly useful when towing.

At the end of our week long test, the Fortuner’s trip computer returned an average of 9.4L/100km, which is fairly decent for a proper large off-roader considering it spent most of its time in urban traffic. It was especially fuel efficient on the freeway, where it hovered around 5.0L/100km. 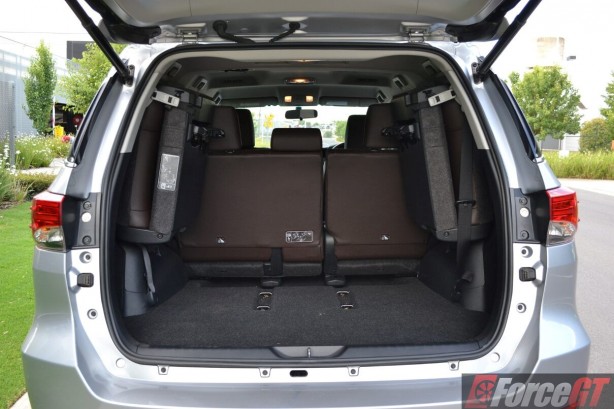 A reversing camera is standard across the range, as are seven airbags, hill-start assist control and an emergency stop signal.

The Toyota Fortuner will resonate well with the outdoorsy Australian demographics. Its size is just right – a little larger than a mid-size soft-roader (say a Nissan X-Trail) and less bulky than the Toyota Prado – yet with seven seats and all the features you need for a weekend in the bush.

Its off-road ability is proper and the unexpectedly smooth diesel takes on any task you throw at it with ease. Plus, it’s surprisingly well-mannered around town.

Price wise, it competes against the coarse Holden Colorado7 and the butt-ugly Mitsubishi Pajero Sport. And the Ford Everest doesn’t come into discussion until we are talking at over $55k.

All things considered, there’s no question about it, the Fortuner is the benchmark of the segment.

Previous This is your ONLY chance to own Bond’s Aston Martin DB10!
Next Exclusive: Hardcore HSV GTS-R in the works. Packs 476kW