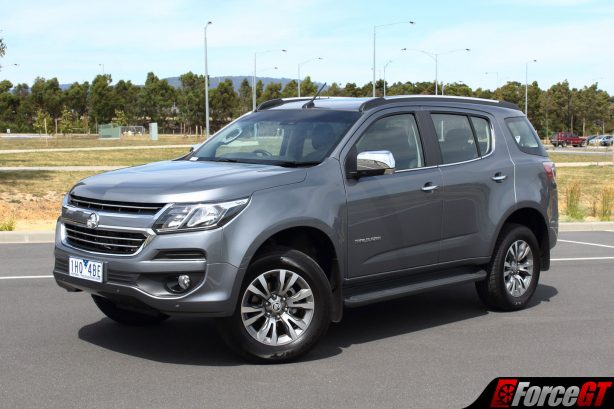 Holden’s latest SUV and replacement for the Colorado 7 arrives with a new name, Trailblazer. Utilising the same underlying platform as the outgoing model and the current Colorado ute, we check out the Trailblazer to see if Holden has adapted the Colorado platform to suit the more refined SUV marketplace.

Forward of the A-pillar the new Trailblazer gains the same new face of the Colorado ute to differentiate it from the previous Colorado 7 that’s being replaced. Big arches, busy headlights and chrome highlights work well together to give the new Trailblazer a fresh new look. The same can’t be said for the remainder of the external styling, with virtually everything identical to the previous model right down to the rear tail lights. 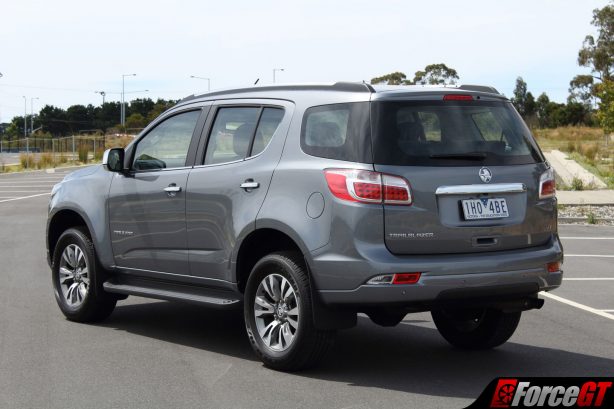 Jump inside and you’ll be greeted by the all new dash with faux double stitching and angular design elements. There’s a few cheap plastics used inside on the centre console but it’s out of sight and out of mind most of the time. At the centre of it all is the 8″ MyLink infotainment system equipped with Android Auto and Apple CarPlay. Holden’s simple menu system is intuitive and a joy to use. As the interior up front is identical to the Colorado Ute, the same issues are evident where the screen surround makes clicking buttons down the bottom difficult. Unlike the Colorado, the Trailblazer’s stereo and speaker system perform impressively, delivering a great audio experience in the roomy interior. The face of the air-con and fan dial controls both feature displays showing temperature and fan speed which was one of my personal favourite interior features. 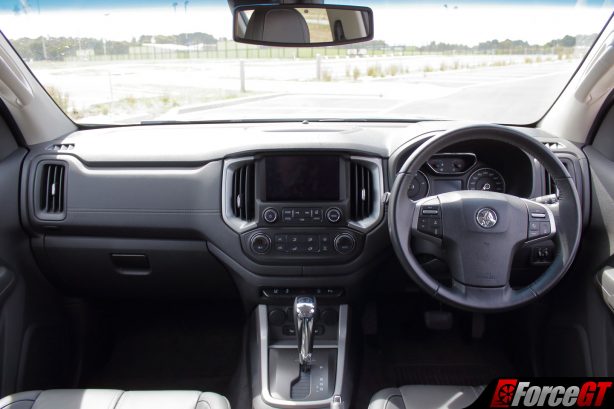 The dash cluster looks great with red dials against white writing and chrome highlights. In the centre sits the trip computer display which shows a huge array of information from fuel usage, digital speedo through to tyre pressure and much more. The display is controlled through the stalk mounted controls making navigation easy while keeping your eyes on the road. Holden hasn’t changed the steering wheel from the old model but this is by no means a bad decision as the wheel feels great in hand and the wheel-mounted controls have a sensible, easy to use layout. 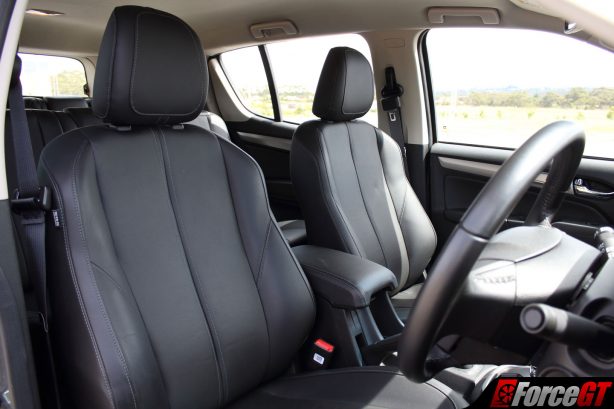 The top spec Trailblazer LTZ we tested came with leather stitched seats in each row while up front the seats are also heated. The seating position in the Trailblazer isn’t perfect but it’s acceptable. While others in the class come with a telescoping steering wheel, the Trailblazer lacks this option, just like the Colorado ute it’s based on. For short and long trips, the seats were comfortable and even offered decent lateral support. Unfortunately, only the driver’s side is electrically adjustable where as passengers will have to make do with manual adjustment. The mid row of seats easily swallow three adults and a further two can be added to the rear if needed for short trips, as leg room is lacking. 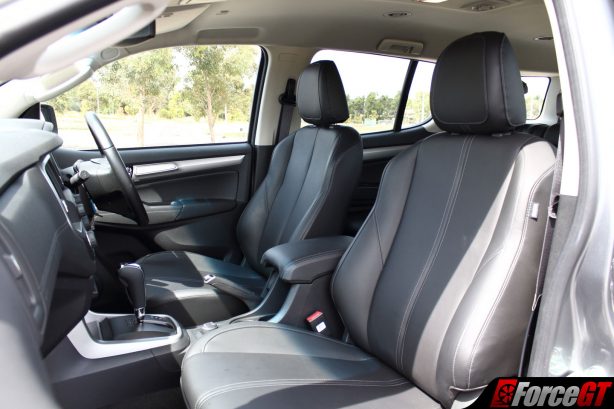 When all seats are placed upright you’re left with a paltry 235 litres of cargo space in the back but this extends to 1,830 litres after dropping all of the seats flat.

From the driver’s seat, visibility is decent for regular driving and the addition of blind spot monitoring helps greatly when changing lanes. The high bonnet does make judging distance from the front difficult, so you’ll have to rely on the parking proximity sensors for accuracy here. A reversing camera is included which is an absolute must on all SUV’s and in combination with the rear cross traffic alert, you’ll be able to back out with confidence. 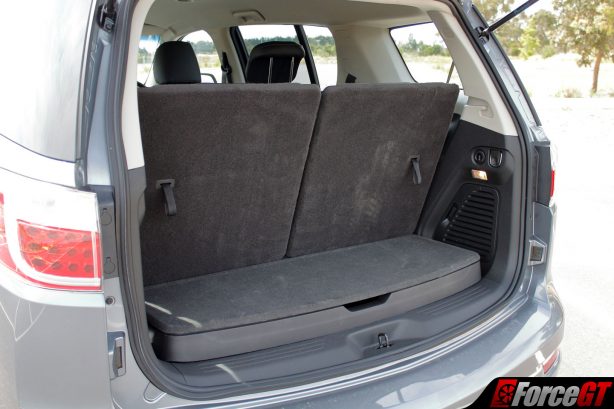 The cornerstone of the Trailblazer is the 2.8-litre turbo diesel Duramax engine which has 147kW, but more importantly, 500Nm of torque. The power delivery offers up a wall of power at virtually any rev range which surges the car forward and makes it a very capable tow vehicle. Efforts have been taken to improve interior noise levels but when the taps are open there’s no denying it’s a diesel under the bonnet. Vibrations are kept to a minimum and the whole unit is rather smooth, no mean feat for a 4-cylinder that’s a diesel but Holden has pulled it off. With so much torque available, the six speed automatic gearbox doesn’t have to work terribly hard to make the most of it, shifts are smooth and the box performs well. For such a large car the 10.5L/100km fuel economy figure we generated with an equal mix of freeway and suburban driving was decent and average for the class. Holden claims a figure of 8.6L/100km is achievable in similar conditions but we weren’t able to match it. 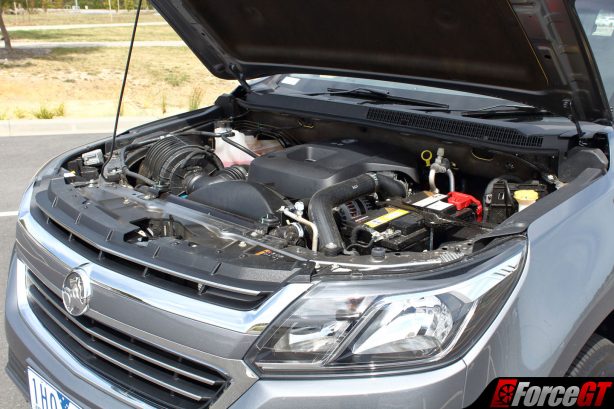 Through the bends the Trailblazer feels well planted with only a hint of body roll, the electronic steering rack doesn’t provide the most accurate feedback through the wheel but this is no sports car, either, so its decent enough. Thanks to it’s ute based heritage, the Trailblazer absorbs bumps without batting an eyelid and performs well on rough terrain, keeping you in control. Improved on the Colorado is the brake feel which gives a nice progressive pedal feel when putting on the anchors.

The Colorado platform has been adapted very well for the SUV market and Holden has done a great job of refining the whole package, making the Trailblazer an incredibly versatile and capable all rounder.

Usually when a ute is adapted into other packages, it’s a horror story of compromises but for the Trailblazer it feels like the opposite has been achieved; you get the great towing capability of the ute with all the refinement and comfort of a modern SUV.

If anything, the Colorado platform is more at home in this guise than as a ute. Against it’s rivals, the Trailblazer puts up a serious value proposition in addition to a well implemented feature list.