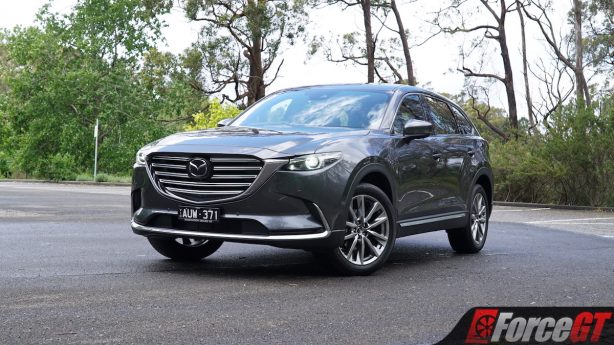 Since its launch in late 2016, the second-generation Mazda CX-9 has thoroughly impressed with the performance and luxury it offers, and has laid the blueprint out for the design language and technology of Mazda’s wider range.

But with the CX-9’s fabulous turbocharged engine now poached for the Mazda6 and CX-5, the rest of the range sporting more tech and nicer interiors than ever, and the contention from a second seven-seater in the line-up – the diesel-only CX-8 – Mazda needed to do something to help its flagship model truly assume that position once more.

Cue the 2019 update that sees the CX-9 bestowed with even more features and, somehow, an even nicer interior, although the improvements do come at a slight price premium.

To see if these changes have done the trick, we grabbed the keys to a front-wheel drive Azami model to see if Mazda has made something great perfect. 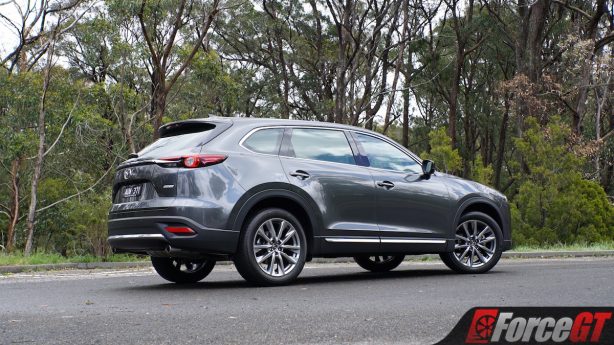 The most notable highlight of the CX-9’s refresh is the introduction of Apple CarPlay and Android Auto for the first time in models equipped with Mazda’s MZD Connect infotainment system – do note, the BT-50 was the first Mazda to sport smartphone mirroring, although it uses an aftermarket Alpine head unit.

While Mazda has previously announced that smartphone mirroring compatibility can be retrofitted to older models at a cost, this marks the first time it has been included from the factory. Unsurprisingly, the integration with your phone presents well on its high-res eight-inch touchscreen.

Also on the tech front, GT and Azami grades gain a partially-digital gauge cluster with a central seven-inch TFT screen for the speedo and trip computer, which is designed to pair cohesively with the analogue dials surrounding it. 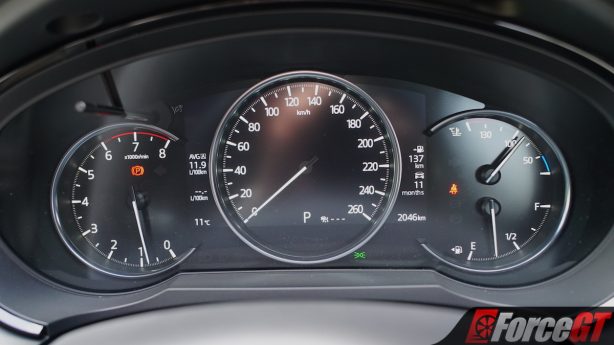 Mazda also claims that a number of minor changes have been made both in the cabin and under the skin of the CX-9 to lower NVH levels, bringing further cabin refinement.

Additionally, 2019 sees the introduction of an all-new trim level – the Azami LE – which sits above the standard Azami as the new range-topper. Available only in all-wheel drive guise, it sports even nicer Nappa leather and real-wood inserts in its interior to put it truly on the level of rivals in a higher price bracket.

Also worth noting is Mazda’s recent introduction of a new, far more competitive five-year warranty with no mileage cap across the range which only sweetens the deal. 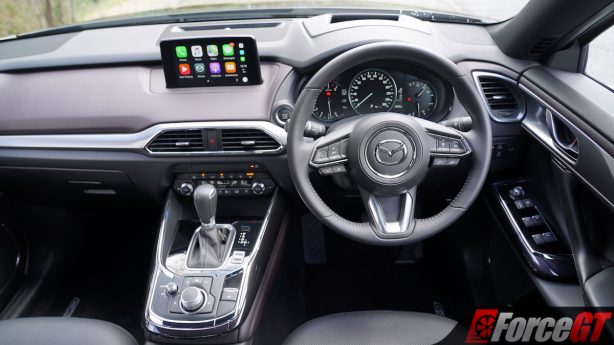 What remains the same?

Well, basically everything else aside from these minor specification upgrades, which certainly isn’t a bad thing at all.

On the inside, you still get the same high-quality interior with gorgeous overall presentation and top-notch materials; a few clever touches like integrated sunshades in the rear doors, three-zone climate control, and a banging 12-speaker Bose stereo; and plenty of room for all three rows of seats and for large items with the seats folded away. 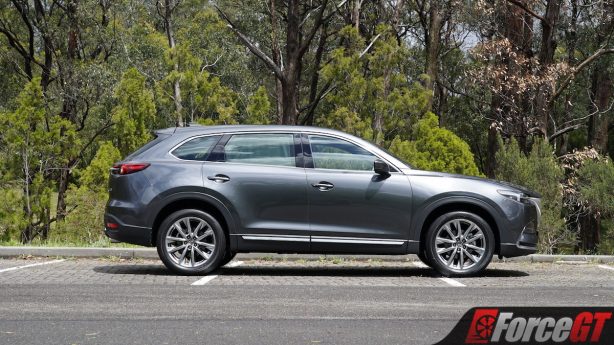 On the outside, things are identical too, with the same stunning bodywork that, as we’ve previously mentioned, is almost desktop wallpaper-level material. I’m a particular fan of it in the Machine Grey Metallic pictured here, which, while an extra $300 spend, is well worth it as it highlights the CX-9’s curves particularly well.

Underneath the gorgeous bodywork, you’ll find that everything there is the same too, with the same two drivetrains still on offer. Speaking of… 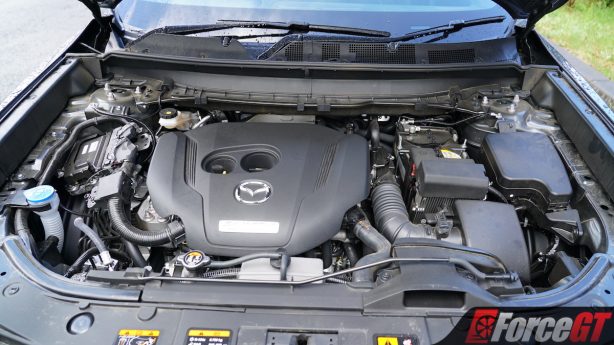 Under the bonnet of all CX-9’s from the base model up is a sole 2.5-litre turbocharged four-cylinder petrol engine mated to a six-speed automatic transmission, both of which have gone unchanged since the current CX-9’s initial launch in 2016.

With strong outputs of 170kW and 420Nm, it’s been designed to offer diesel-like torque with the smoothness and refinement of a petrol engine, and it’s absolutely enough to get the CX-9 around without any problems.

All grades bar the new Azami LE variant are available with either front-wheel drive (like our tester) or all-wheel drive, the latter of which commands a $2,000 premium. 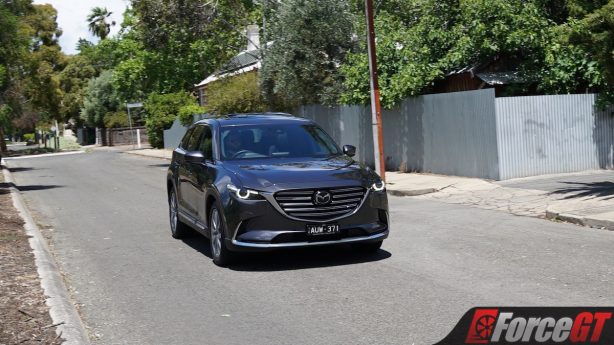 As has been a defining characteristic of the current model, the CX-9 is an SUV that truly shrinks around you when you’re behind the wheel despite its large size.

Yes, you get the traditionally high driving position that provides an excellent vantage point over traffic, but the interior that cocoons and cossets you makes it feel, perhaps surprisingly, like a proper driver’s car.

And it’s not just fooling you into thinking that it is either, as it’s one of the most composed and sorted SUVs to drive spiritedly, with an incredibly balanced ride, direct and confident steering, and a great amount of power and responsiveness from its torquey turbocharged engine.

The six-speed automatic is geared incredibly well and brings the best out of the engine too, proving there’s simply no need to have as many gears as a mountain bike. Its gear changes are nice and crisp, although if we have one complaint about the transmission, it could perhaps do with a set of paddles on the back of the steering wheel for that little bit of additional control. 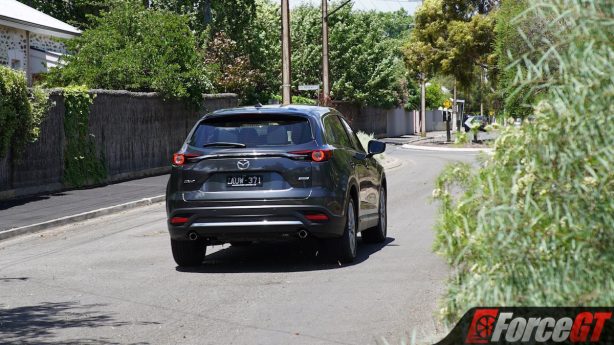 Aside from the lack of paddles, the only other minor qualm may be that our front-wheel drive test car struggled to put the power down as effectively when pushed hard as all-wheel drive variants do. With all-wheel drive available across the range, the problem is easily solved, although it is at a cost. For relaxed, every day driving, however, it’s perfectly fine driving the front wheels alone, and traction issues off the line are few and far between.

Speaking of, the CX-9 is perfectly suited to relaxed driving despite being so ready to go at your right foot’s command, with plenty of low down torque and smooth gear changes pairing nicely to the well-damped ride and the plush interior’s very comfortable seating.

It is admittedly a bit thirsty around town or when driven spiritedly, though it’s worth noting, with our tester showing claimed fuel consumption of 11.5L/100km after 700km of mixed driving – quite a bit over the manufacturer claimed 8.4L/100km, although not unacceptable for a seven-seat SUV of its size. You should see that number drop dramatically during longer stretches of country driving or with a lighter right foot too. 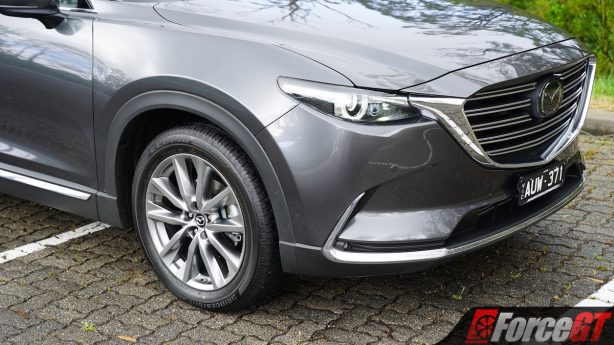 The CX-9 is an incredibly good car, plain and simple, and with even the admittedly minor improvements that have come with each update, it only continues to remind just how good it continues to be.

With an interior and exterior presentation that competes in a class above, and a driving experience that is unparalleled among similarly priced and sized SUVs, it truly remains the class leader.

With the new additions of Apple CarPlay and Android Auto (finally!) and other interior niceties for 2019 models, it only feels better than ever and remains an incredibly compelling value-for-money proposition considering just how much luxury you’re getting for your dollar.