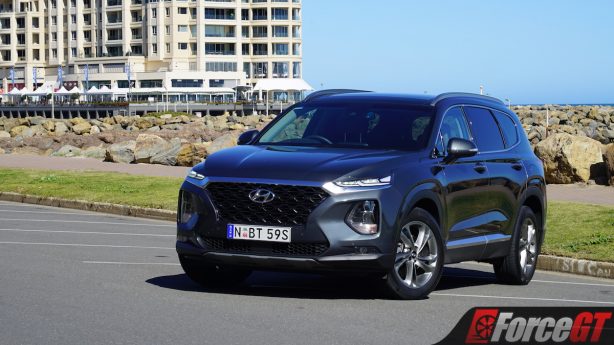 While the Hyundai Santa Fe has always been a worthy contender and a popular buy in the seven-seater segment, the company’s largest offering had started to feel its age as of late, with interior and exterior styling that owed heavily to the previous generation of Hyundai’s cars.

A new model couldn’t have come sooner then as an update seems a year or two overdue, so it’s a good thing that what we’re testing here is the all-new Santa Fe, and one that is a radical redesign from its predecessor.

The tip-in point to the 2018 Santa Fe range is the petrol Active model that sets things off at $43,000. Stepping up to the diesel-only mid-tier Elite model bumps up the cost to $54,000 but also raises the level of standard equipment, while the range-topping Highlander tested here retails for $60,500 – all before options and on-road costs.

Calling this a radical redesign is far from an overstatement, as you only need to take one look at the thing to take that away from it. With front-end styling cues taken from the funky Kona, Hyundai’s smallest SUV, and an overall redesign that brings it up to the modern bar, it certainly looks like a classy thing, especially as a big bus from a mainstream manufacturer. 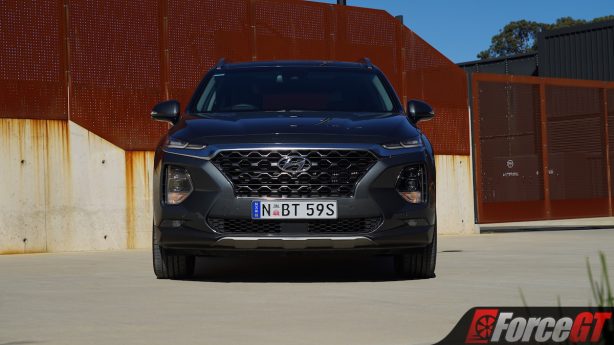 While I won’t deny that it does look rather flash, I’m still not sold on the oddball lighting layout at both the front and the rear of the car – a minor gripe I have with the Kona, too. Maybe it’s because it reminds me a bit too much of the old Jeep Cherokee, or maybe it’s how it challenges traditional front-end styling that portrays a face. Whichever way, it doesn’t look bad – it’s just a bit different and takes some getting used to, if your tastes are like mine.

But while the exterior styling is a bit Marmite, the Santa Fe’s interior is an unquestionable thing of beauty. Our test car had the optional dark beige two-tone leather interior which is well worth the $295 it adds to the asking price as the re-trimming is incredibly thorough. 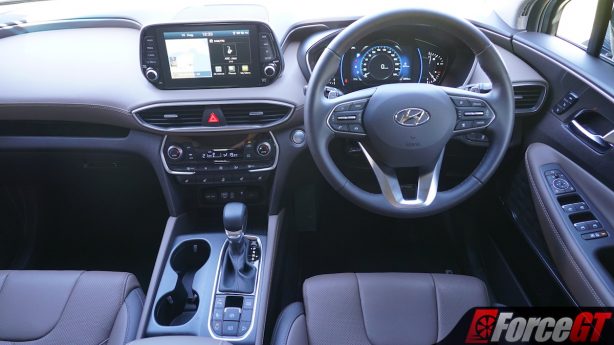 Not only are the seats and dashboard finished in much more welcoming earthy tones, but all of the interior plastics from top to bottom are a dark, chocolatey brown as well, including on places you wouldn’t even think to look such as the steering column, lower sections of the dashboard, and around the footwells. With the dark beige interior, you also get a grey headlining that appears to be woven which feels particularly soft and supple, too.

The quality of the interior finishes are all of a high standard, with the interior remaining largely devoid of harsher, scratchier plastics. The high-res screens for the infotainment system and in the gauge cluster, the excellent ten-speaker Infinity audio system – from the same people behind Harman/Kardon – and little details like the quilted stitching on the seats and the funky speaker grilles in the doors only go to drum up that premium feel even more. 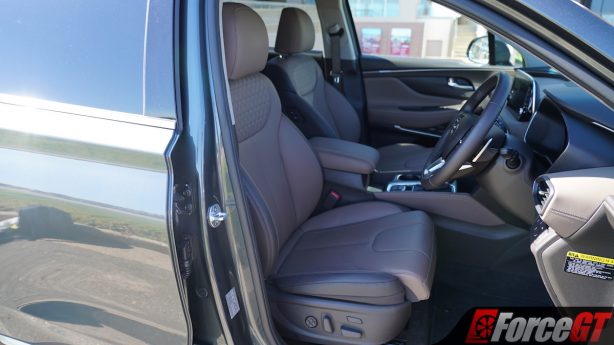 It’s a roomy interior too, although more so for the front two rows than for the third. From the captain’s chair, there’s plenty of wiggle room and large, acceptably soft armrests. All the controls are laid out incredibly well and feel high quality, and a sign of it being fully decked out was the presence of just one single blank switch. The front seats are both heated and ventilated, and the steering wheel will warm itself as well.

There’s pretty excellent visibility from the front, with a high and commanding driving position, and a good view from the large windows, although the thick driver’s side A-pillar is a tad intrusive, a common issue these days to meet stringent crash test requirement.

The second row is very spacious as well, with no sign of cheaping out on the materials for the second or third row door trims or armrests. The seats are still plush and well padded, as are the armrests, and the outboard seats on the second row pew are heated to further drum up the plushness. 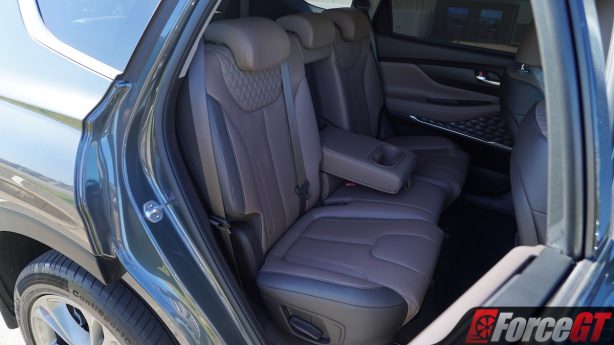 With the second row seats on rails, you can slide them forward in order to give more legroom for third row occupants when the rearmost seats are deployed. While it would be helpful if you really needed to fit seven adults in one of these, I personally wouldn’t bother as the third row will be largely unpleasant for anything more than a short drive for anyone who’s graduated from primary school.

For the kids who will be demoted to the rear, they do at least get their own air conditioning controls and individual air vents – a nice touch that’s also shared with the Santa Fe’s under the skin twin, the Kia Sorento. 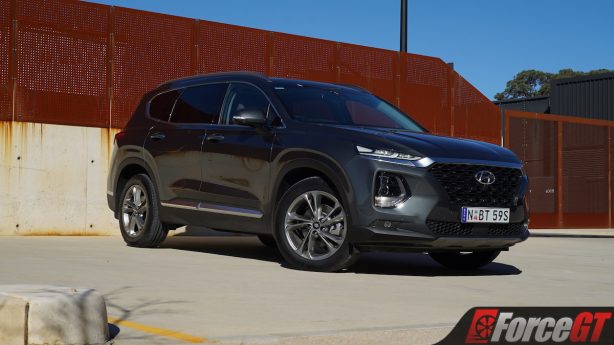 Speaking of what underpins the new model, the Santa Fe Highlander tested here sports a 2.2-litre four-cylinder turbo diesel under the bonnet producing 147kW and 440Nm, the same outputs as the outgoing model, with power sent through a new eight-speed automatic to all four wheels.

As mentioned, there’s no petrol option for the Elite and Highlander grades with the more powerful diesel coming as standard. However, the base Active comes with a less powerful 2.4-litre petrol unit backed by a lesser six-speed auto, with the diesel engine a $3,000 option on the entry-level model.

Upon first impression – that is, start-up – the diesel doesn’t appear to be the most refined oiler out there, with a distinct clattery tone to it on idle and when accelerating at lower speeds that leaves no confusion as to what’s fuelling it. 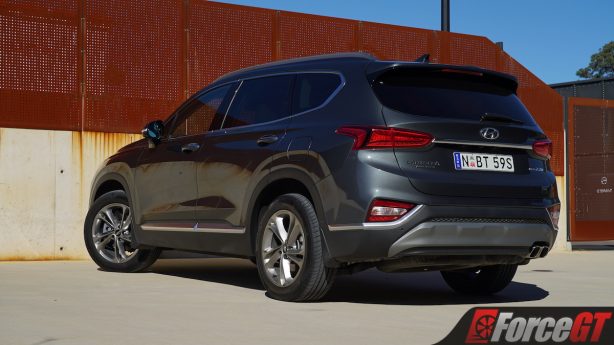 But once on the move, it quietens down significantly as you reach the higher gears, and on the freeway or country roads you’ll quickly forget about it. Not only is the engine quiet on the move, but the whole cabin is too, with minimal road and wind noise intrusion.

The ride quality is very good as well, with the locally-tuned suspension having enough rigidness to it to alleviate body roll for the most part, while remaining forgiving enough to soak up the bumps and deliver a comfortable but connected ride.

Combine with the plush cabin fit-out and quietness on the move and it becomes clear the Santa Fe has been designed to eat up the miles. 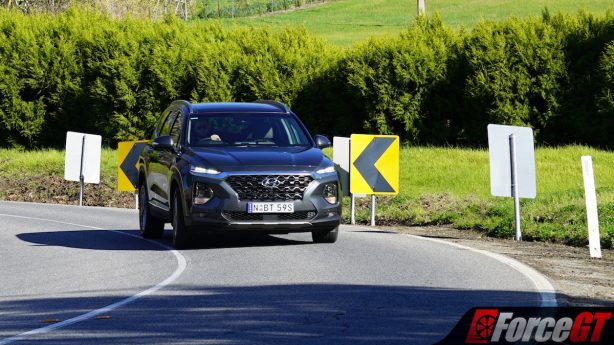 With paddle shifters for the auto box on the Highlander model, an all-wheel drive system that you can feel shuffling the power to the right wheel at the right time, and a sport mode that makes a discernible-enough difference to the car’s dynamics to warrant its inclusion, it’s not half bad on a twisty road either.

Obviously it’s never going to be the most agile thing in the world, but it’s not far off the class-leading Mazda CX-9’s impressive backroad prowess – especially considering this is a diesel. The torque spread is wide enough, the in-house eight-speed is geared well enough, and the suspension tuning is calibrated so that it feels as far from sloppy as a seven-seater can.

For those who would be largely sticking to the city, it would be nice to see a peppier turbocharged petrol engine making its way under the bonnet backed by the same new eight-speed auto, but for those who have a longer commute or spend a lot of time on the open road, it’s absolutely worth having a look at the diesel. 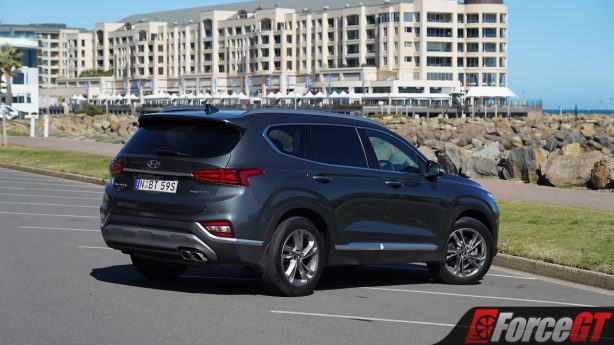 While Hyundai hasn’t delivered another game-changer like it has with the astonishing i30 N, the Santa Fe does, similarly, go toe-to-toe with the best in its class. It’s a well-designed and capable seven-seat family bus that will keep the whole family comfortable on the inside, while looking stylish and sophisticated on the outside.

Fully kitted out in top-spec Highlander trim as tested here, it’s remarkably plush and well-equipped too, while offering slightly sharper pricing than what are probably its two closest rivals other than the related Kia Sorento – the diesel-only Mazda CX-8 and petrol-only CX-9.

Simply put, it’s a solid car that’s well worth a look at if you’re wanting or needing a larger SUV, and it’s proof that Hyundai are far from done with rolling out a range of quality cars.