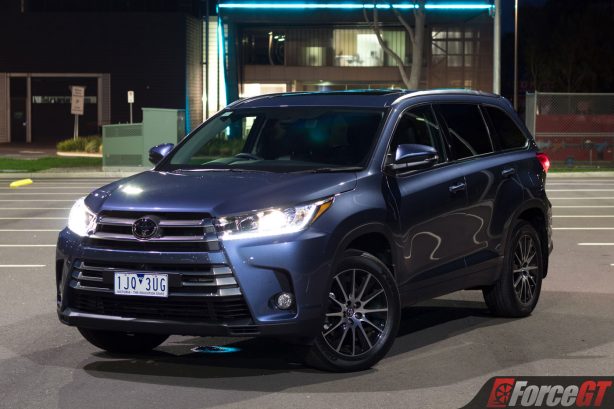 The popular 7 seater Kluger SUV from Toyota has had a refresh for 2017 that boasts improved safety, refinement and performance. These improvements come at an increased cost throughout the three-tier range and the top spec Grande model we’re testing rolls in with a $1,831 increase on the previous year model.

Visual upgrades to the Kluger are sparse with only minor alterations to the front grille, rear tail lights and wheel designs. Given that there wasn’t anything out of style on the old model the mantra of “If it’s not broken, don’t fix it” rings true, the Kluger will retain its established refined looks for several years yet. 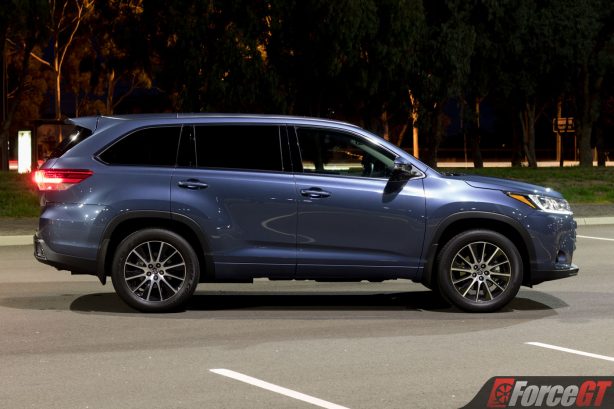 Not a whole lot has changed inside either, the most noticeable alteration is the inclusion of blue mood lighting throughout reinforced by updated door trims. Everything we loved about the Kluger remains, the giant center console and dashboard storage shelf make their return heightening the already impressive practicality of the 7 seater SUV. The Grande model we tested comes loaded with a ceiling mounted Blu-ray player, heated front seats, sunroof/moonroof, triple zone climate control, radar cruise control, electrically adjustable driver seat with thigh support and two recordable seating profiles for the driver. The electric tailgate features a split opening window allowing quick easy access when you’re in a hurry.

Unfortunately, the foot operated parking brake also makes a return and Toyota have done little to update the entertainment unit’s interface software though the screen does now measure 8 inches, don’t expect Android Auto or Apple CarPlay support either. Normally in a large SUV the stereo can produce a really big sound yet in the Kluger we weren’t blown away by it, it was acceptable but not impressive. The Kluger that we had seemed to continue the recent trend of sub par steering wheel trim from Toyota at the moment. Ours had some leather separation from the rear of the right spoke which was the only issue on an otherwise well put together interior. 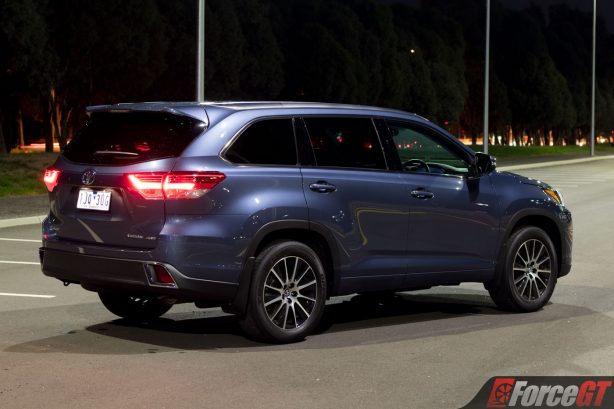 Visibility all round isn’t an issue and the included panoramic view does its best to uncover the blind spots. It’s a system that uses a combination of cameras located around the car to stitch together a top down view that’s quite useful for parking in tight spots. The leather clad driver’s seat allows adjustment of both lumbar and thigh support electronically and shoulder support was quite decent with the seats holding steady when cornering harder than usual. The middle row seats offer plenty of space thanks to the sliding and reclining controls to keep passengers happy though adults would do best to keep out of the rear as it can get rather tight unless you’re child sized. 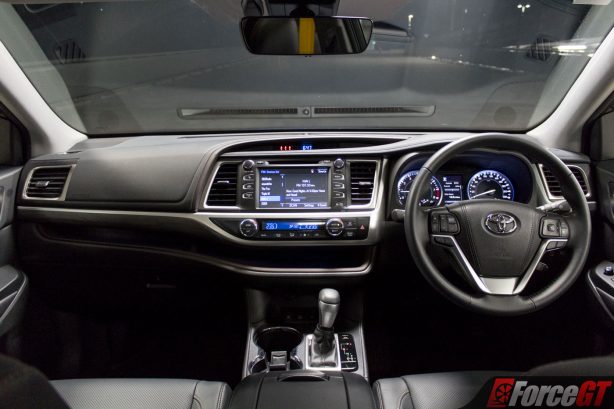 We loved the engine in the old Kluger and Toyota have pressed their advantage by adding direct injection and bumping up the compression ratio to boost the output up to 218kW @ 6,600 rpm while the torque climbs to 350Nm @ 4,700rpm. Higher compression ratios usually require a higher octane fuel, not so in this case as 91 octane is recommended when filling up the 72-litre tank. It’s a torquey and grunty motor that when pushed also makes a decent noise.

Toyota has replaced the 6 speed auto with a new 8 speed unit that works an absolute treat. Improved ratios and more of them make light work of hauling the two tonne SUV around town and overall refinement has also taken a step up. The combination of big smooth V6 power and the well engineered 8 speed automatic leads to a smooth driving experience that doesn’t disappoint. Of course the greatest advantage of two additional gears is the improved fuel economy which Toyota claims the Kluger will achieve 9.5L/100km for the 4WD model. For our test we didn’t clock up too many kilometers on the freeway with predominantly suburban driving taking precedence, even so we managed 14.4L/100km which would certainly drop when the Kluger gets the chance to stretch its legs. 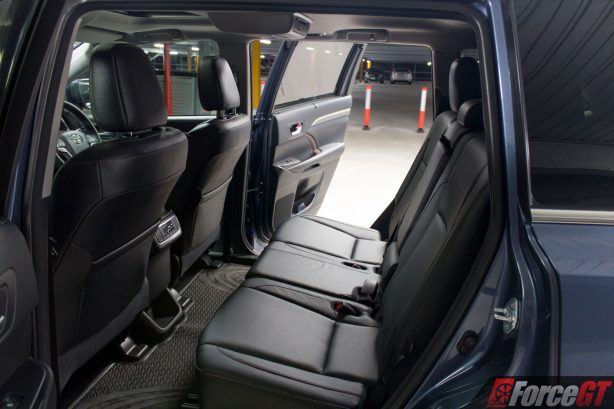 When it comes to handling Toyota didn’t really have much of an incentive to improve on the out going model as it did a superb job in all conditions. The steering feel is accurate and provides ample feedback while the turn in is sharp allowing change of direction with little challenge. Weighing in at over two tonnes, the Kluger is a bit of a tank and when you get close to the limit of grip you’ll certainly feel all that weight trying to break free but you’ll never feel out of control.

Driving the Kluger instills a great sense of confidence no matter the situation as it handles poor road conditions with ease while providing a relaxing drive in optimum conditions. The big V6 can easily get the Kluger moving at pace and the brakes perform well when it comes time to wash that speed off, the car remains poised and receptive to adjustments when braking hard or soft. One thing that surprised us was the relatively small turning circle for such a large car making the negotiation of tight carparks just that little bit easier. 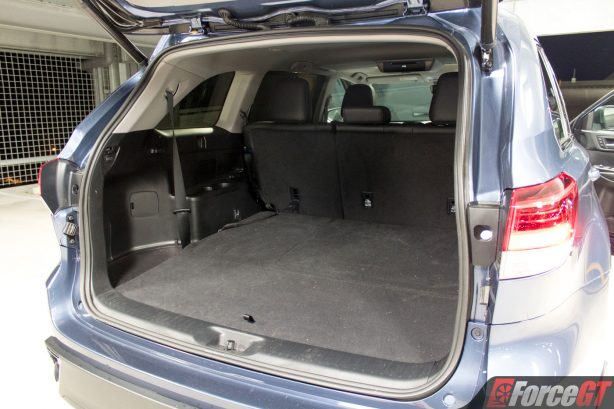 Further enhancing the key strengths of the Kluger for this refresh model with more power, improved fuel economy and additional refinement has worked in Toyota’s favour to produce a respectable 7 seater SUV in an increasingly competitive marketplace. The Kluger offers boatloads of practicality that’s bolstered by a sensible feature set and safety options to make it an exceptionally well rounded family car.

The new fourth-generation Sorento is the flagship for Kia’s reinvigorated global SUV line-up, alongside the …