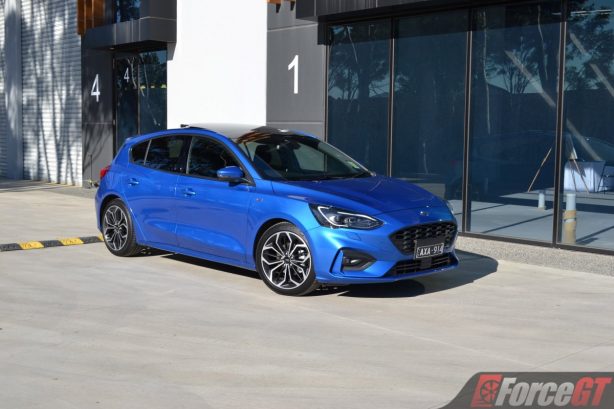 Not just another small car – says the new Ford Focus commercial. There is every reason for Ford’s marketing team to sell their latest Focus as unique in the segment because this class is one of the most competitive today. At the time of writing there’s no fewer than 10 players in the segment including household names such as the Toyota Corolla, Mazda 3, Hyundai i30 and Volkswagen Golf. And in a small market like Australia one ought to stand out to succeed.

We spent a week each in the mid-spec ST-Line grade of the hatch and wagon to find out if the new Focus has all it takes to back its marketing slogan.

Kicking off the Focus range is the entry-level Trend priced from $25,990 plus on-road costs.

Next up is the first-ever ST-Line grade which is offered in both 5-door hatch and wagon body styles, and brings sportier styling priced from $28,990 for the hatch and $30,990 for the wagon.

Sitting at the top of the Focus range, for now, is the Titanium priced from $34,490. 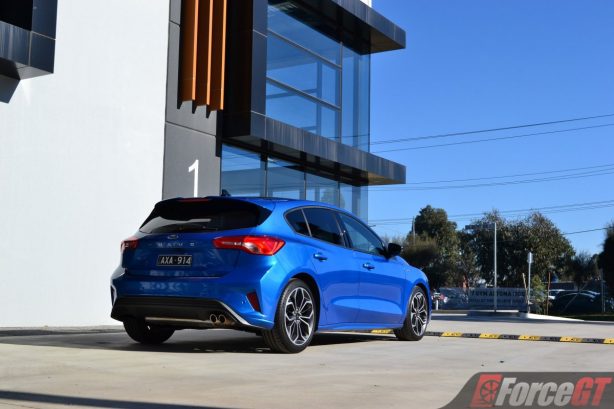 The previous generation Focus was a bit of a mix bag when it comes to styling, with plenty going on in the body work that didn’t quite fuse together well. This new model, however, is one sharp looking thing with a design that flows well from front to rear. We especially like the low nose and wide grille up front which has a hint of Aston Martin in its cues. The less cab-forward body and cleaner design certainly bring a more upmarket and sophisticated look to the new Focus.

The wagon is 290mm longer than the hatch and it, too, doesn’t look like your normal two-box wagon, with clever use of lines and creases to soften the girth in the rear.

The ST-Line is currently the range’s sportiest model (before the ST and RS performance models come along) and comes fitted with 17-inch alloy wheels (ours had been optioned up with 18’s), a sports suspension with a 10mm lower ride-height, beefier front and rear bumpers, LED adaptive cornering fog lamps and LED taillights. 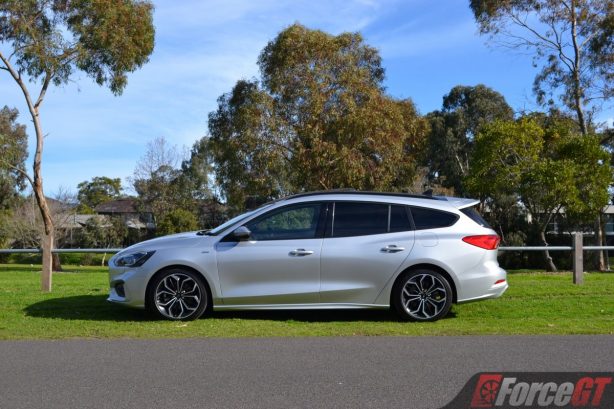 Things are a lot more predictable and less inspiring inside the Focus’ cabin. It’s not as premium-feeling as that of the Mazda3, nor is it as chic and modern as that of the Corolla. Still it’s a lot better than the old one. Gone are the myriads of buttons in the centre console and in their place is a much cleaner design.

The quality of the materials has greatly improved, too, with soft touch surfaces adorning the upper dashboard and front door cards, lifted by aluminium-look highlights in the air-con vents, door handles and centre console. Even the plastic trims have a nice textured surface on them.

The overall ambiance, from the fit and finish to the feel of the buttons and knobs, feel and sound very solid, very Teutonic.

Our ST-Line hatch and wagon were both fitted with a flat-bottom steering wheel, red stitching throughout and extra bolstering sports seats. 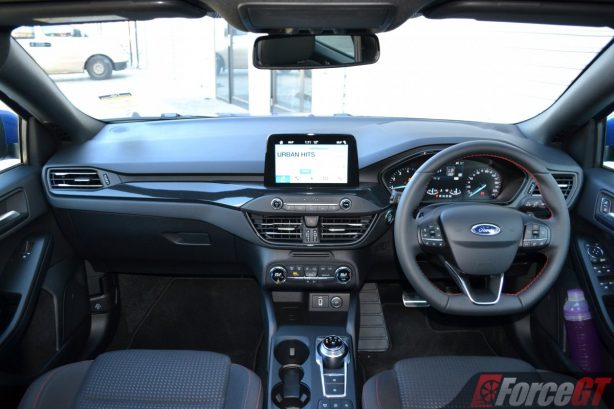 With a wheelbase some 52mm longer than the previous model and smarter packaging including less bulky front seat backs, this new Focus has a more spacious cabin. There’s more legroom and headroom in the rear than before, let down only by the lack of rear air con vents.

Boot space, measured up to the cargo cover, is 341 litres for the hatch which is typical in this class, while the wagon’s cargo capacity is a capacious 575 litres. With the rear seats down, the space expands to 1320 litres in the hatch and 1620 litres in the wagon. 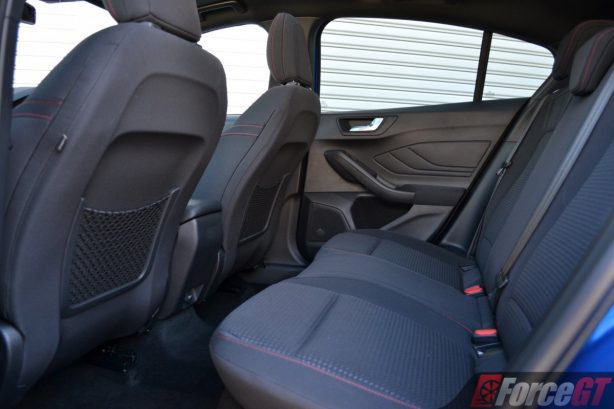 In the driver’s seat, visibility all-around is good except for the thick A pillar base hindering front three-quarter visibility. The ergonomics are spot on with all controls within easy reach and in locations that make sense, though the Land Rover-style rotary gear selector switch may not be to everyone’s liking.

The 8.0-inch infotainment touch screen is one of the highest resolution displays we have seen in this class, with superb clarity and a modern interface that is fairly user-friendly. If only its response and loading speed was quicker.

The display is also slow in entering night mode and the reverse camera is too bright even in night mode, though Apple CarPlay and Android Auto pairing is as seamless as it can get.

The entire 2019 Ford Focus range is powered by a downsized 1.5-litre 3-cylinder turbocharged petrol engine generating 134kW of power and 240Nm of torque, matched with an 8-speed automatic transmission with wheel-mounted paddle shifters.

Don’t be put off by the unusual number of cylinders and the small capacity because this new mill is one of the best small engines we have sampled. With peak torque available across a wide rev range of 1750 to 5000 rpm the new three-pot is surprisingly punchy, with good low down grunt giving it effortless acceleration on take off.

It feels and drives like a bigger engine. In fact, it is 2kW more powerful than the old four-cylinder and makes the same amount of torque.

And the most impressive, perhaps, is the way it sounds. You wouldn’t have thought it’s a three banger because it actually sounds quite nice and enthusiastic up top, in stark contrast to the usually coarse sounding three-pot we have driven in the past. Its refinement is also right up there, too. 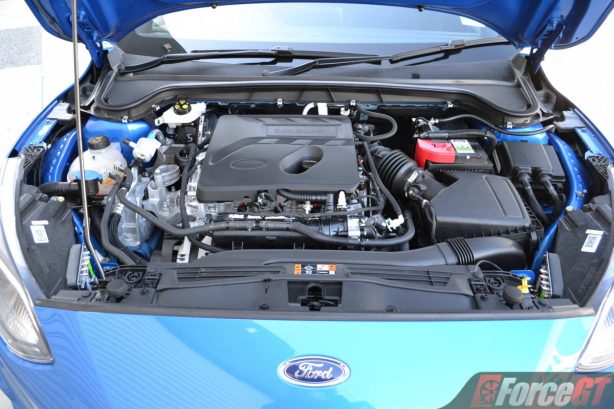 The 8-speed auto, which replaces the old 6-speeder, is a great match to the engine with not too many gears. It serves up smooth and quick up shifts, though down shifts can get clunky at times around slow moving traffic. But nothing is worse than the annoyingly slow transition between Drive and Reverse. The delay was so bad in the wagon that the car would roll on any but a totally flat surface as if the transmission was in neutral.

Unlike the previous model, the new Focus no longer offers a manual gearbox.

Being the sport model of the range, the ST-Line variants have slightly firmer dampers which contribute to a firm but not uncomfortable ride on the road. We do like how they are set up to give you just enough road feel without being overly jiggly.

On undulating surfaces the wagon’s ride is just a tad more compliant than the hatch thanks to the added weight in the rear and a more superior multi-link rear suspension (as opposed to the hatch’s torsion beam set-up).

Where the sports tuned suspension of the ST-Line really shines is at the bends, with both the hatch and wagon remain nicely pinned to the road. These are no performance cars but the impressive grip and poise they exhibit around corners offer a secured and confidence inspiring drive. 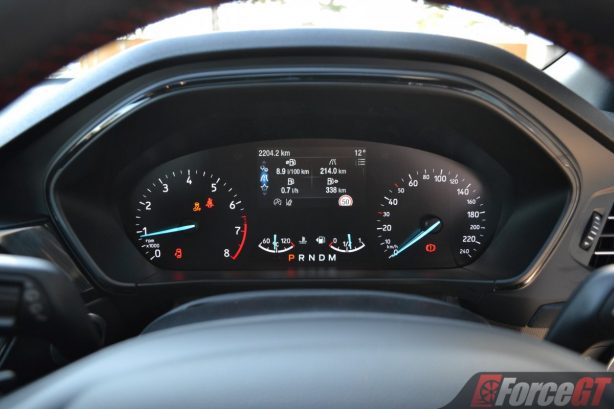 Yet, there are a few qualms and they surround the car’s driver assist system. On test, the driver’s side blind spot monitoring system (optional on ST-Line) indicated traffic even when it’s clear, only deactivating after a lane change or coming to a halt. The adaptive cruise control (also optional on ST-Line) also has poor prediction of traffic, often slow to respond to a slowing vehicle ahead or cut in. And lastly, we find the brake pedal too touchy and could do with more progressiveness.

Like almost everyone else these days, the Focus comes with a 5-year/unlimited kilometre warranty.

In terms of servicing the Focus requires a visit to the dealer every 15,000km or no longer than 12 months, which ever comes first. Servicing cost for the first 4 visits is capped at $299.

Fuel consumption is rated at 6.4L/100km on the combined cycle for both the hatch and wagon. On test with both cars covering over 600km of mixed roads the figures aren’t too far off, with the hatch returning a very economical 6.9L/100km and the wagon managing 7.0L/100km.

The new Ford Focus is an improvement over the old model in virtually all area. Better looking, more space, improved refinement and updated features make the 2019 Focus a strong contender in the highly saturated small car market.

The mid-spec ST-Line variants tested here are the sweet spot of the range, affording owners a good feature set and nicely balanced ride and handling attribute.

Mustang fans will rejoice that the limited-edition, high-performance Mustang Mach 1 will be available to …