2019 Toyota Corolla ZR Hybrid Hatch Review – one for the driver 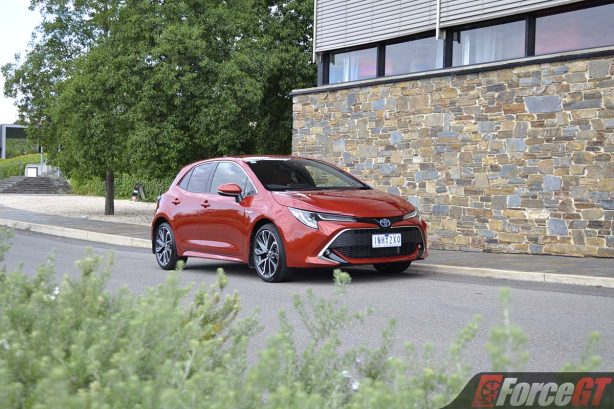 Like the Toyota Camry, the Corolla is one of those cars that’s all too easy to bag – justifiably or otherwise, depending on your point of view – but there’s no denying its immense popularity and rock solid reliability. Toyota sold over 40 million of them and after spending a week in the all-new 2019 Corolla, I have a new found respect for what Toyota has done with the hatch.

Now in its 12th-generation, the Corolla ZR hybrid is the flagship of the 2019 Toyota Corolla hatch line-up, sitting above the entry-level Ascent Sport and mid-spec SX.

And if you are wondering where the previous base Ascent is, it has been relegated to the history books in Toyota Australia’s quest to chase more private buyers. You can also forget about drive-away deals – at least for now – with the brand focusing instead on higher-spec models.

As such, prices are up, with the new range starting from $22,870 before on-road costs; compare to the drive away deals of under $20,000 for the outgoing model. Our range-topping ZR hybrid carries a $31,870 sticker, again, before on-roads. However, they do come loaded with equipment to justify the higher cost.

What do I get for my money? 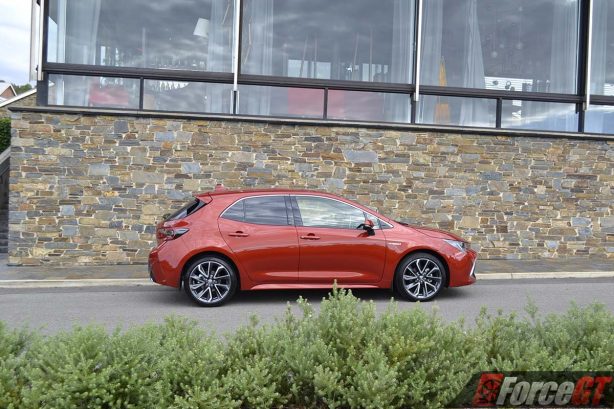 While prices might be up, the Corolla is still cheaper than its direct rival, the Mazda3, which in range-topping SP25 Auto guise retails for $35,490 and carry similar features.

And thanks to larger and better looking 18-inch alloy wheels and a snazzier rear bumper treatment, the ZR is the sportiest looking of the lot.

And like the rest of the range, LED headlights with auto high-beam, LED daytime running lights and LED taillights are standard.

Inside, interior presentation has taken a giant step up with an abundance of quality materials, including soft touch plastic with classy contrast stitching on the dash, and front and rear door cards. There is a 7-inch Multi Info Display with digital and analogue display options in the instruments cluster flanked by a pair of analogue dials, and a soft blue backlighting on all switches. 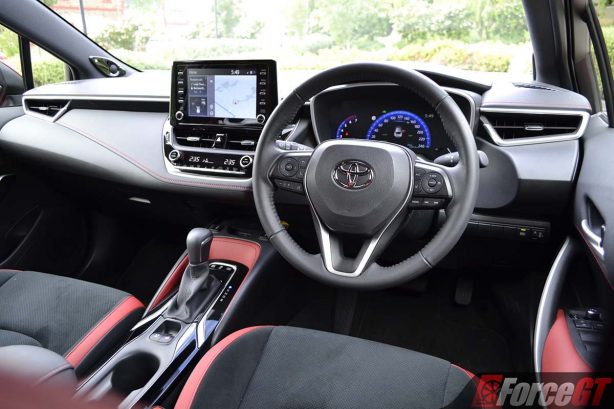 Like the SX, the ZR comes with a wireless phone charger, DAB+ digital radio and an 8-inch colour touchscreen with satellite navigation and SUNA live traffic.

These are on top of expected features like power windows with auto up and down for all windows, power auto folding and heated door mirrors, automatic central locking and Bluetooth connectivity. 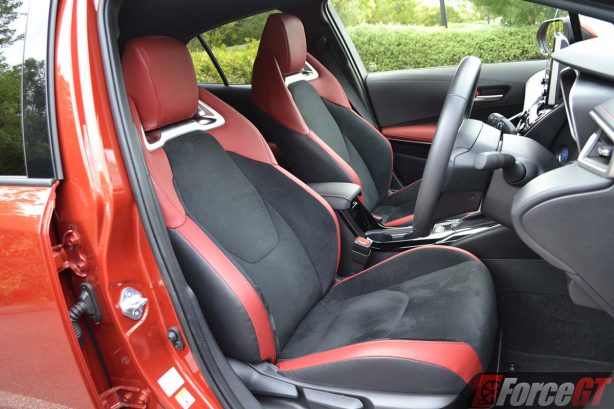 Our test car also comes with the red leather interior option, which to my eyes, jazzes up the interior even further and matches well with the dazzling Volcanic Red exterior paintwork.

Sadly, Toyota is alone in resisting calls to have Apple CarPlay and Android Auto connectivity in its cars and there is no front seat ventilation (cooled) – features that are available on higher spec models from Mazda, Hyundai and Kia.

In a sign of times, and possibly to the dismay of some of the Corolla’s loyal and older fan base, there is no built-in CD player either, with USB and Bluetooth streaming your only options. 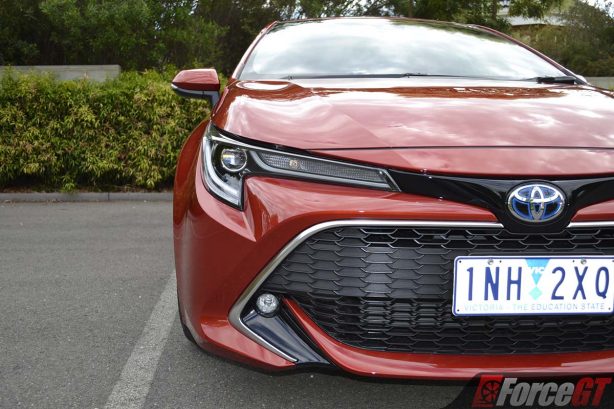 Safety is a big focus in the new 5-star ANCAP rated Corolla. On top of the usual array of airbags (including driver’s knee airbag) and reversing camera, Toyota’s latest hatch comes with the brand’s class-leading Safety Sense Pre-collision Safety System.

What are the vital stats for the engine and transmission? 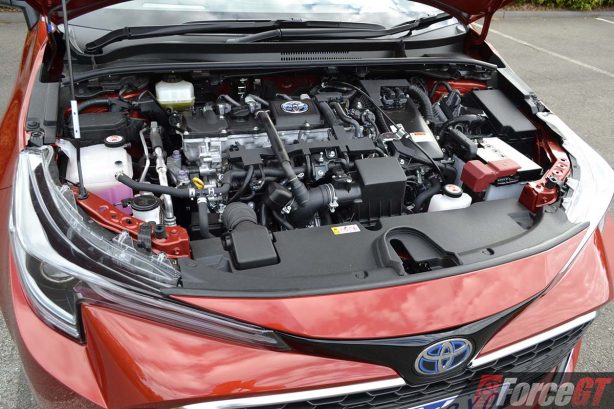 While the name might imply turbocharging, the ‘Dynamic Force’ 2.0-litre direct-injected, four-cylinder petrol engine is a naturally aspirated unit. It generates 125kW at 6,000rpm and 200Nm of torque from 4,400-4,800rpm.

It is matched with a newly developed CVT automatic with a 10-speed sequential unit with a ‘launch gear’ that eliminates that elastic band feel that is a common bugbear of CVTs.

The hybrid tested here features a 1.8-litre Atkinson cycle four-cylinder petrol that produces 72kW at 5,200rpm and 142Nm at 3,600rpm. It is married to a pair electric motor-generators that deliver 53kW and 163Nm. The resultant total system output is 90kW with variable peak torque.

You can run on EV mode via the press of a button but only for a relatively short 3km and as long as you keep the speed below 30km/h.

It is mated with an e-CVT automatic that has been tuned for greater low-down response to improve the car’s driving experience.

How fuel-efficient is it?

The hybrid’s combined fuel consumption is rated at 4.2 litres per 100km. After 500km of mostly urban driving (80%), with a few longer freeway runs thrown in, I averaged an impressive 5.0L/100km, making the Corolla hybrid as efficient as a diesel hatch. 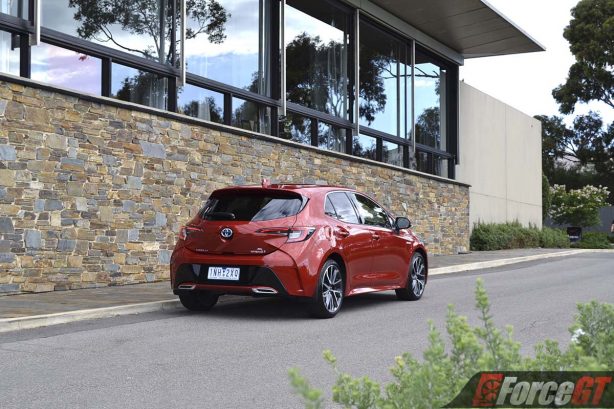 If the design is oh so un-Corolla, the way it drives will potentially silence haters and is a far cry from what it used to be. It will even worry a Mazda3 or two.

For that, we have the new TNGA (Toyota New Global Architecture) platform to thank. Like others built on the new platform (Camry, C-HR, Prius), the Corolla is actually fun and engaging to drive!

While 90kW isn’t class-leading in terms of output, the ZR puts everyone of those kilowatts to good use and thanks to the electric motor’s low-end torque, it blitzes off the line with vigour.

There’s a newfound athleticism that will almost be alien to most Corolla owners, courtesy of a lower centre of gravity and multi-link independent rear suspension set-up.

The steering is responsive and precise and it feels amazingly composed around the corners. The ZR also has a slightly different steering ratio (13.6 vs 13.5) compare to the rest of the range, bringing a marginally more direct rack and quicker steering (2.65 lock-to-lock vs 2.76). 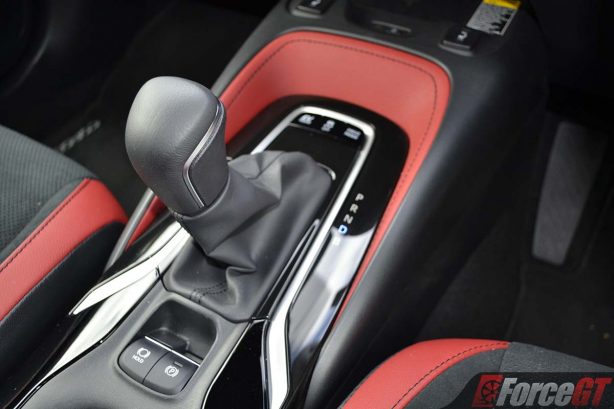 While a CVT still wouldn’t be a driver’s transmission of choice, the e-CVT in the ZR is relatively inoffensive most of the time. In manual mode, it mimics a stepped torque converter gearbox to a degree before revealing itself as an imposer higher up the rev range.

Stopping power is fine without being impressive and like most hybrid brake systems, the pedal can feel a little spongy and unnatural.

But overall, the new Corolla ZR does a good impression of a warm hatch. 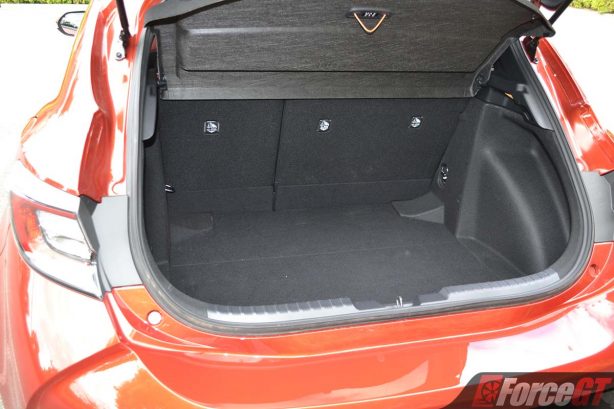 As you might have read in other reviews, the biggest gripe for the new Corolla is its tiny boot space, which trails not only rivals but is also smaller than the outgoing model (360 litres). However, the good news is if you’re looking at the ZR, it comes with the biggest boot of the range.

At 333 litres, it is 116 litres more sizeable than its lesser siblings, thanks to the absence of a spare tyre (a tyre repair kit is provided). Folding the 60/40 backrests will liberate more space to carry longer items.

It’s not the benchmark for rear legroom either especially those who are vertically gifted. 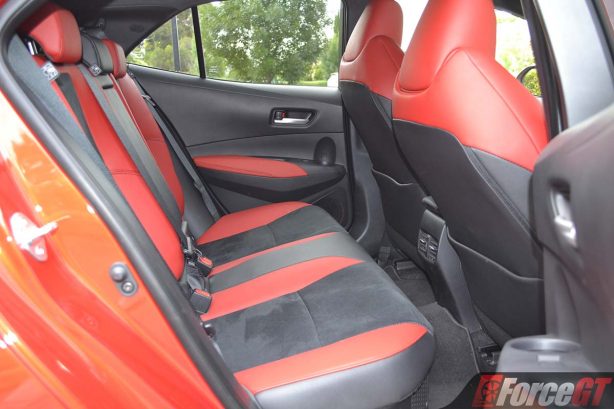 It’s a different story for those in front as the standard buckets seats are incredibly comfortable and supportive with electric lumbar support. The driving position is excellent where you sit low with your legs stretched out to meet the perfectly placed pedals.

There are decent sized cup holders front and back, along with door pockets and a usefully sized bin under the front centre armrest.

Forget what you know about the Corolla. This is the new Corolla and by far the best.

It is immaculately presented both inside and out, comes with class-leading safety technologies, but significantly, the ZR is the Corolla you want to drive.

And with Toyota recently joining the 5-year warranty club plus 60-days money-back guarantee, the proposition is truely compelling.