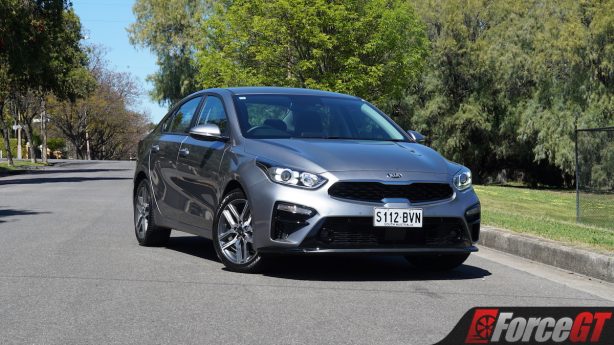 Kia has given its top selling model, the Cerato, an almost complete overhaul for the 2019 model year, with swanky new looks, an up-to-date interior, and nearly all of the latest safety tech imaginable.

However, there’s one big thing you won’t find in the new Cerato – a new engine. At least not yet. While a version sporting the Hyundai i30 SR’s 1.6-litre turbo engine is soon to arrive in South Korea and Europe, it’s currently all but confirmed for Australia.

That means the new Cerato still sports the 2.0-litre naturally aspirated petrol introduced with the outgoing model’s 2017 refresh, with nought to differentiate it from before. 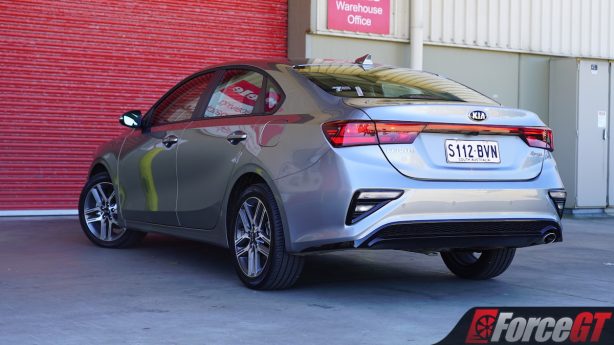 The other thing you won’t yet find is a hatchback variant as Kia has decided to bestow us with the sedan variant ahead of the hatch’s rollout in the coming year.

Regardless, I was still interested to see how the new Cerato stacks up in spite of what it’s currently lacking, so I spent some time with the new sedan variant in range-topping Sport+ trim to see if it can carry on the nameplate’s sales success. 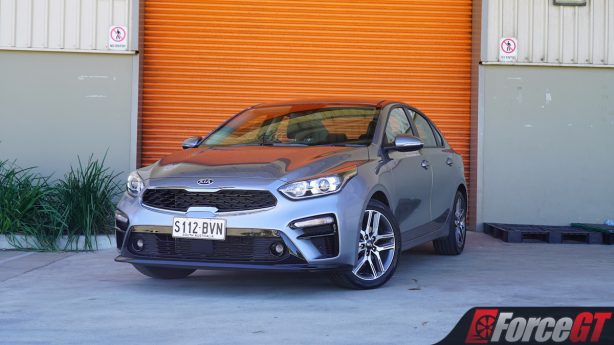 Things certainly get off to a very good start on the outside, as I must commend Kia’s California-based design team for the new Cerato sedan’s exterior styling. The influence of the company’s flagship Stinger GT is clearly visible, most prominently at the front end and with the conjoined taillights at the back.

Simply, it’s a good-looking thing with few design elements to pick at – although the one gripe I have is with the rear indicators that are oddly placed separately from the main taillight clusters and towards the bottom of the bumper. Otherwise, there’s little to criticise.

On the inside, the Cerato is pretty solidly kitted out in range-topping Sport+ form, as you’d certainly hope for and expect. The layout is certainly very good – open enough to make it feel specious, but with a driving position that makes you feel like you’re sitting in the car, not on it. 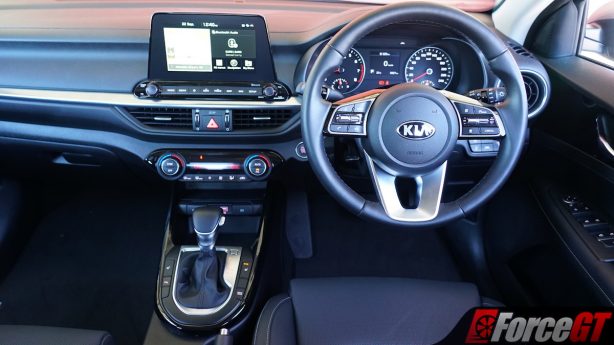 Also improving it is the high-quality eight-inch touchscreen that utilises the same infotainment system as most other Kia and Hyundai models, offering satellite navigation with live traffic updates, and Apple CarPlay and Android Auto compatibility.

While the screen in the gauge cluster is clear to read with its large text and is also comprehensive in what it covers, it is unfortunately low-rent compared to the centre screen as it is only black-and-white and rather pixellated. It’s only a very minor gripe, however, as it does get the job done which is what really matters in a car like this.

Under the bonnet of all Ceratos – for the time being, at least – is the aforementioned carry-over 2.0-litre naturally aspirated inline-four that is unfortunately dated by only sporting less-efficient multi-point fuel injection. With meagre outputs of 112kW and 192Nm, both of which are only fully accessible in the higher parts of the rev range, it’s an engine that is unfortunately underwhelming the majority of the time. 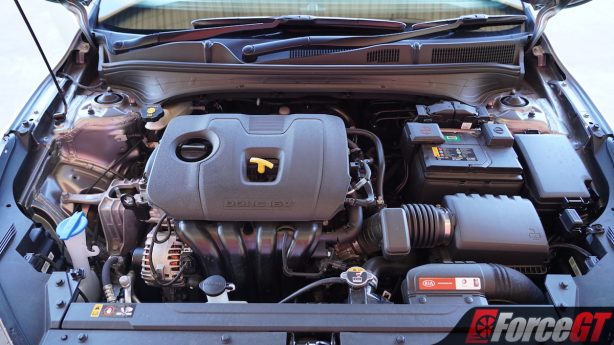 When it does climb onto the cam as you near the redline and you finally reach its narrow power band, it certainly is enough to get it moving with some motivation, but the noise it makes once you’re in the higher reaches is coarse and utterly raucous.

In the Sport and Sport+ variants, power is sent exclusively through a six-speed automatic to the front wheels, although the base S model comes as standard with a six-speed manual. While being a torque converter auto means the transmission is very smooth around town, it is a bit dim-witted when you try to drive with any vigour – not shifting when you want it to, and being a bit rough about it when it does. 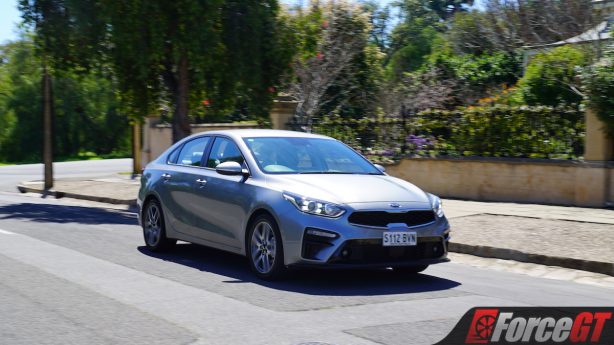 It’s a real shame that the Cerato’s drivetrain is such a let-down as it is otherwise very good to drive. When I first got behind the wheel, I was almost shocked by how tight the handling was – the steering feels quick and direct, and the car remains flat and balanced through the bends, helping it to corner with real confidence. In that sense, you do feel the Cerato is working with you, rather than against you.

And while the locally-tuned suspension is firm enough to eliminate most of the roll you could ever provoke, it’s still forgiving enough to provide an appropriately smooth and comfortable ride that’ll keep passengers happy too. 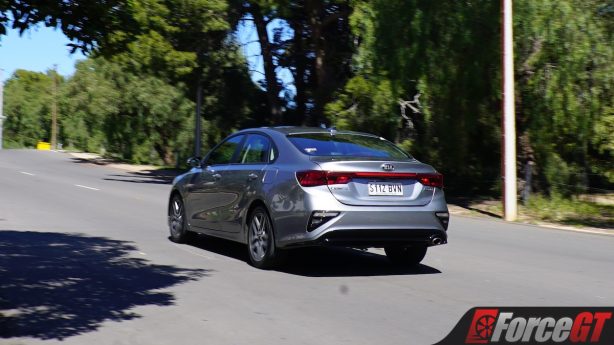 What will certainly keep you happy without question is the famous warranty deal offered by Kia – a seven year, unlimited kilometre standard coverage period that is coupled with seven years complimentary roadside assist and seven years capped price servicing, all of which goes to further the excellent value-for-money proposition of the Cerato.

Speaking of servicing, the average cost you’ll spend per service is around $410, with the total servicing cost over the course of the seven year plan amounting to $2,869. The Cerato’s servicing intervals are 12 months or 15,000km – the expected standard these days.

As for fuel consumption, the other major running cost, the Cerato certainly isn’t incredibly economical due to its old-school multi-point fuel injection, but it is pretty decent all things considered. Kia claims the Cerato Sport+ should use 7.4L/100km on the combined cycle, and we saw an indicated 8.5L/100km over the course of 500km behind the wheel that included an even mix of city, country, and spirited driving. 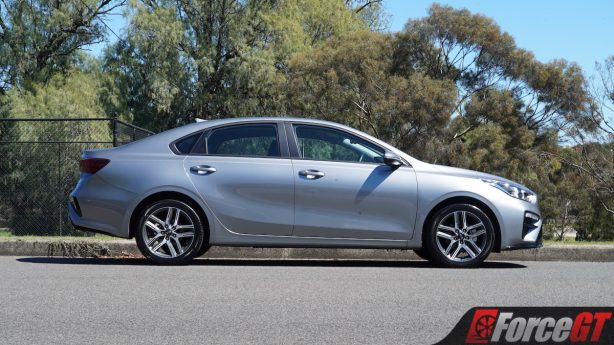 While it’s a shame that the new Cerato doesn’t bring a refined drivetrain to the party, it does build upon the good things the outgoing model offered, with classier looks and sharpened handling now thrown into the mix.

It also offers an impressive amount of interior kit, and a particularly commendable amount of standard safety equipment across the range for something at this price point, although it is admittedly disappointing that blind spot monitoring isn’t a standard inclusion.

Regardless, the new Cerato delivers very good value-for-money and we don’t doubt that it’ll continue to be a strong seller for Kia. It certainly whets our appetite for the hatch and potential 1.6-litre turbo variants slated to come out in 2019, too.