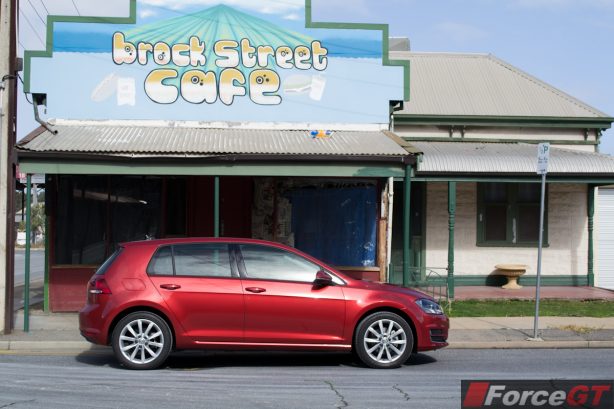 How do you improve on a car that already sets the benchmark for others to follow? Load it with even more features and enhance its dynamics, safety and fuel efficiency without costing any more.

As more and more Australians are deserting large cars for smaller vehicles, the small car segment that the original Golf helped define more than 30 years ago is more relevant than ever.

Let’s find out why it is deserving of these accolades.

Like the Porsche 911, there is only a handful of cars with a design that has been constantly refined, tweaked and enhanced over generations and has thus, become timeless. The Golf is one of them.

There is an instant sense of familiarity with its design, notably, the typical C-pillars, long roof line and blistered wheel arches. Yet, subtle changes to the car’s headlights, taillights, front bumper design and the sharp character line below the door handles create a new sensation to the observer at the same time. 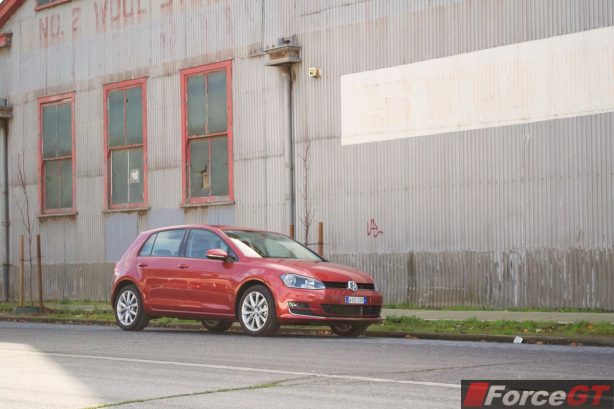 It’s a similar story inside the new Golf. Its typical Volkswagen built quality and feel will continue to set the benchmark where others are judged by. Remarkably, the company’s designers managed to convey that all-important waft of understated class without resorting to overt ostentation.

Plant yourself onto driver’s seat and you are in one of the best driving positions in its class. The centre console is now slightly angled towards the driver for a sportier feel. In a heady signs of the time, every model in the range gets a 5.8” touch screen display with intuitive iPhone-style swiping and proximity sensor. Whilst most of the switchgear has been completely redesigned, the inherent Teutonic conservatism means even a Golf 6 owner would struggle to pick the change.

The new to the Golf electronic park brake not only saves space and weight, but is also a cinch to use. The system automatically disengages when you pull away, and re-engages when you park – without the driver ever having to touch the button. 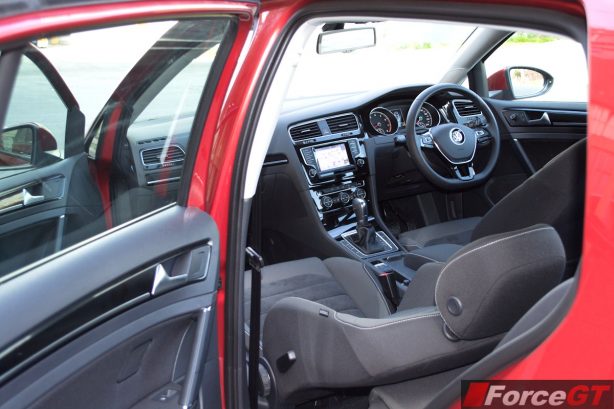 The Golf 7 has a 46mm longer wheelbase than its predecessor and this translates to an extra 15mm of extra knee room in the back. Shoulder room has also increased by 30mm in the front and 31mm in the rear seats.

Behind the hatch, its cargo space has grown by 30 litres to 380 litres, while its variable cargo floor can also be lowered by 100mm. Volkswagen has also increased the width of the boot space opening by 47mm and decrease the load still height by 17mm for ease of loading.

If I had to be picky, some of the lower dash plastic employed are now of lower quality than they used to be on the Golf 6. Likewise, the rear door trim isn’t as lush as it used to be. But otherwise, the Golf 7’s cabin is one of the best, if not THE best, in its class.

Australia gets three engine options: the 90kW and 103kW 1.4-litre turbocharged 4-cylinder petrol and the 110kW 2-litre turbocharged diesel. The choice of this trio of powerplants means all our Golfs are equipped with the more sophisticated multi-link rear suspension as opposed to the torsion beam setup which is reserved for the 77TSI variant.

Whichever variant you choose though, the Golf will wrap you in a reassuring bubble of stability, confidence and accuracy. All variants turn-in with acuity and composure. Its impressive level of refinement and predictable as a priest’s Sunday sermon handling, which no doubt will please most buyers, do come at the cost of driver involvement for keen drivers. 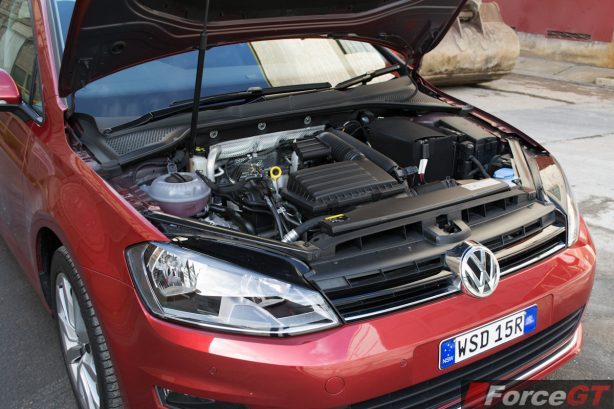 However, that’s not to say it isn’t a good driver’s car. Far from it, the Golf’s new lightweight MQB platform (which is up to 60kg lighter than the outgoing model) infuses the car with agility and corner carving ability rarely seen on a mainstream hatchback.

There is decent grip at each corner, even on the Bridgestone Ecopia low rolling resistance tyres on the 90TSI. What’s more compelling is that the driver is acutely aware of the behaviour of each wheel through the light and precise tiller. Its pothole soaking ability is also right up there with the best, further reinforcing that premium feel of the car.

Of the pair of petrol engines, the 103kW turbocharged 1.4-litre paired with a 7-speed DSG is the sweetest. It’s an eager engine that has a good balance of grunt and economy. Predictably, the diesel is the most powerful yet fuel efficient, and just as smooth. Although one cog fewer than the 7-speed DSG in the petrol variants, the six speeder is the perfect match for the torquey diesel. But due to its extra weight, it tends to feel more nose heavy around the bends.

Despite the recent spate of recalls (mainly to fix the DSG gearbox in certain models), Volkswagens are still some of the best put together vehicles on the market. Its interior is also one of the most copied in the business.

Its solidity and robustness are conveyed in typical Germanic precision. Apart from the aforementioned slightly downgraded choice of plastic, the Golf 7’s cabin feels more premium than its price tag would suggest. 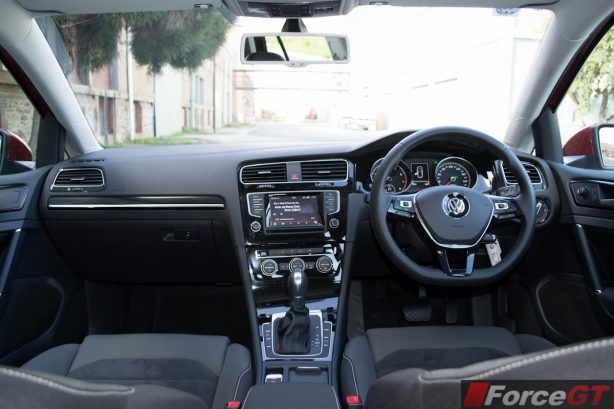 Volkswagen Australia has simplified the Golf 7 lineup.  The 90TSI is available in base spec and a $3,500 Comfortline. The latter brings 16-inch alloy wheels, dual-zone climate control, front and rear parking sensors, rain-sensing wipers, and a rear-view camera. 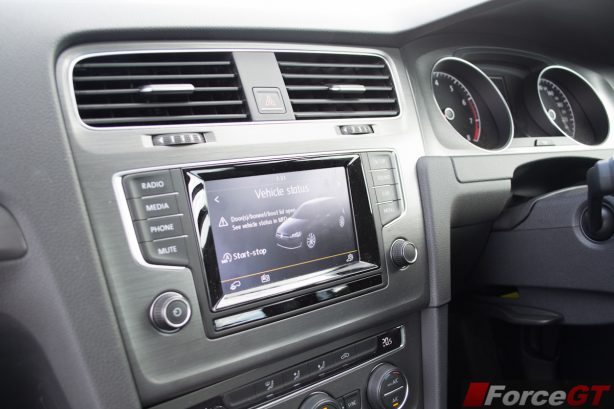 Volkswagen has further streamlined the options available for each model. The only options for the 90TSI are automatic gearbox and metallic paint, while Comfortline option is limited to Sat-nav at $950 and a Driver Assistance Package that costs just $1300 and includes an array of driver aids such as adaptive cruise control, front assist with emergency brake, proactive occupant protection system, parallel parking assist, and driving profile selector; the latter allowing drivers to select between Eco, Sport, Normal and Individual modes.

Highline buyers can opt for a panoramic sunroof for $1850, bi-xenon headlights for $2150, Vienna leather upholstery for $2950 and the same Driver Assistance Package for $1300.

Metallic paint costs $500 on all models.

Just when others thought they have caught up with the Volkswagen Golf, the goal post has been shifted again. The new Golf 7 has once again set the benchmark where others are judged by. With a class-leading cabin, hugely capable chassis, fast shifting gearbox and fuel efficient engines, Volkswagen’s latest hatchback is truly more for less.