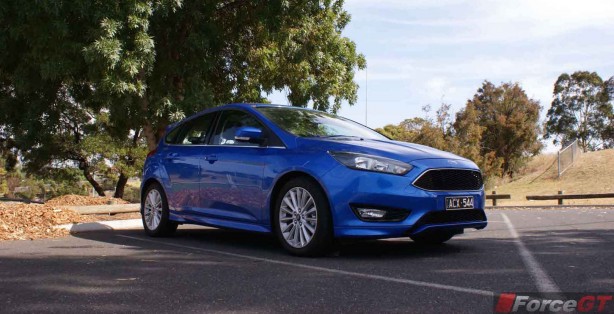 The Ford Focus is a car worthy of its accolades. Its 2015 debut brought all the best loved features to the table, while being wrapped up in a stylish new frame.


Our Focus hatch came setup with the Sport package, this is Ford’s mid-level offering starting at a price of $26,490 (MRLP). In an attempt to move away from entry-level cars, Ford have now done away with their base ambiente model and instead pushed for a 3 tier pricing scheme. The Trend is now the low-end model at a starting price of $23,390, while the Titanium remains the high end model carrying with it a $9,300 premium, setting it at $32,690. 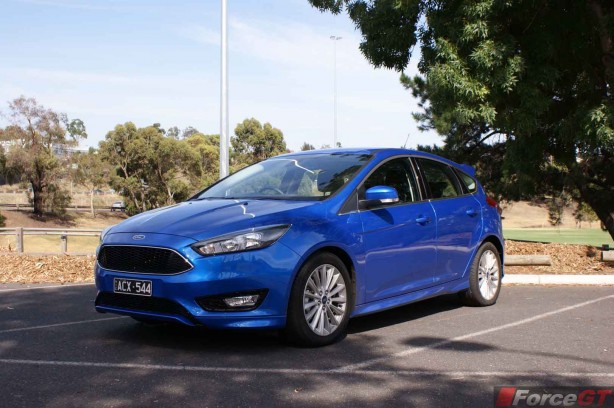 The hatch shares most of the design traits of its sedan counterpart and remains mostly unchanged between the various badge levels. Standard across the 3 models; the new Focus receives a sporty trapezoidal grill, Active Grill Shutters, rear spoiler and fog lights. The only real upgrade to the exterior when purchasing either the Sport or Titanium is an increase in wheel diameter and inclusion of side skirts; the base comes with 16-inch wheels while the sport and titanium editions come with 17 and 18-inch wheels respectively.

While the Sport and Titanium don’t look all that different from the Trend, they do receive some external technological enhancements such as heated auto folding mirrors and puddle lamps. 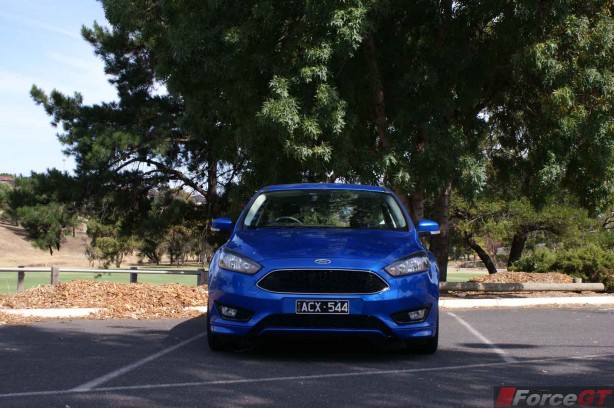 What I found quite interesting was Fords Active Grill Shutters. These shutters dynamically open and close to not only achieve optimal operating temperatures but also to reduce aerodynamic drag. A major advantage to this system is during cold starts; shutting the vents will quickly increase engine and oil temperatures allowing for greater lubrication and reduced wear.

For the purpose of aerodynamics, the shutters will close; which in-turn creates smoother airflow over the car. The unit control module takes temperature as a higher priority and will only close the shutters if the engine does not require any additional air cooling at any one time. An added benefit to reduced drag is also an increase in range as your vehicle requires less fuel to maintain speed.

The Active Shutter technology was first introduced to the Focus range in 2012, however the 2015 model still achieved a better coefficient of drag (0.295) than its predecessors (0.318). The reduction in drag is largely attributed to the addition of these shutters however wheel deflectors, engine under-shield and streamlined mirrors also aid in drag reduction.

Another plus for the car is the Torque Vectoring driver assist. Torque vectoring is appearing more regularly in newer cars, it aims to increase control and turning sharpness by altering torque to each driven wheel. In instances where traction control would simply cut engine power to maintain control, torque vectoring will instead dynamically brake the inside turning wheel allowing the vehicle to turn more effectively.

Considering the Focus is a front-wheel-drive vehicle, under-steer is a big issue; however in practice, cornering with Ford’s torque vectoring system felt very natural and gave a significantly reduced feel of under-steer. Quick turns could be made with much greater confidence with the vehicle ending up where we expect it. Kudos to Ford engineers for getting it right. 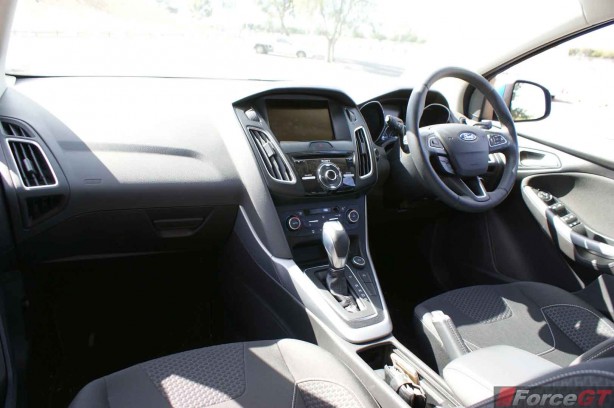 The cluster features a set of 4 analog gauges; the 2 large gauges representing the speedometer and tachometer, while the smaller gauges display the vehicles temperature and fuel status. Sitting between these gauges lies an LCD information panel. The panel mainly functions as a digital trip computer. However, it also provides access to various information sources such as average fuel consumption and Ford’s recommendation system dubbed “EcoMode”.

EcoMode serves to rate driving behaviour; periodically it will update and provide the driver with hints on how to modify their driving to better improve fuel economy. Our vehicle was equipped with an Automatic transmission so I was only given recommendations on speed and anticipation. While it thought my anticipation skills were perfect, it did suggest driving smoother to improve my economy. Fair enough suggestion. Vehicles equipped with manual transmissions will also receive a score on shifting ability.

The seats felt very comfortable over long periods of driving, there is also a slight bolstering which both supports the driver and furthers the sporty appeal of the hatch. The seats on the Sport are manually adjusted and come wrapped in a rather cheap feeling cloth. The top end Titanium comes with leather electric seats. 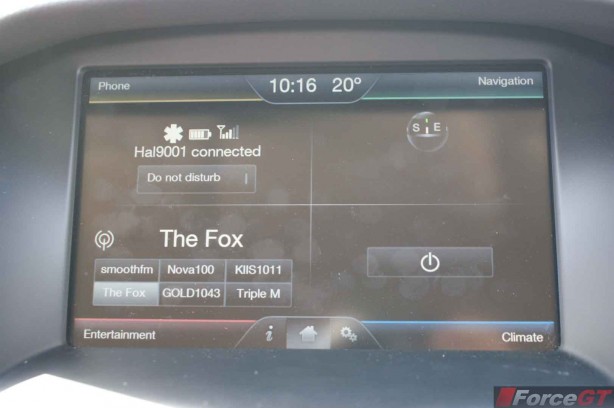 Our Sync 2 was also equipped with a built in GPS; a nonstandard feature worth $600. Personally I feel the GPS worked really well and it’s integration with Sync’s voice control and cluster make it a worthwhile upgrade. Climate control can also be controlled from the Sync 2. 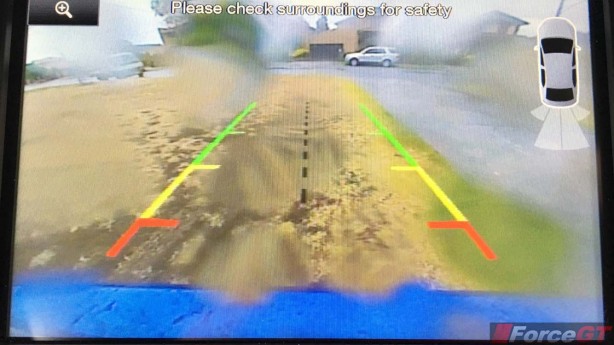 The Focus also includes a reversing camera with dynamic lane markings, while I believe the system is brilliant and aids parking significantly, it appears the Focus has a slight design flaw with its implementation. As you can see from the above image, in wet/rainy conditions, water tends to drip down the hatch onto the reversing camera causing a blurred image. While we can still make out where we are parking, it certainly hinders the cameras usefulness. Another point to look out for is the misalignment of the camera, however this issue should be rectifiable at a dealership. 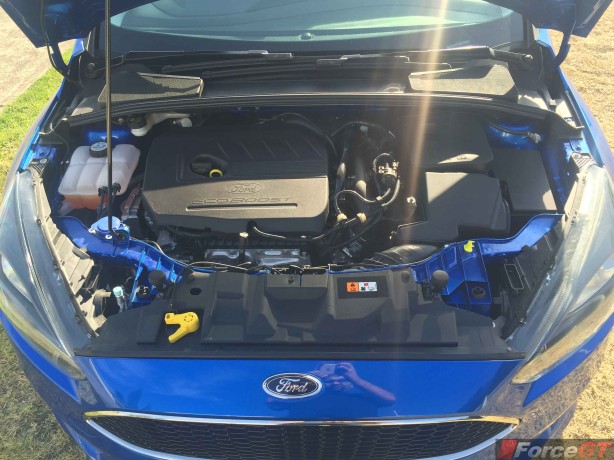 Ford offers the Trend and Sport in manual or automatic. Those looking to purchase the Titanium however, will be limited to the automatic gearbox. The additional driver aids make it well worth the sacrifice. Ford’s “Active Safety” on the Titanium model provides the driver with blind-spot monitoring, cross-traffic alerts, emergency braking, automatic parking and front parking sensors. The auto parking is the main reason behind the auto only requirement. Both the auto and manual variants come with 6 ratios.

Those looking to drive the auto like a manual will be sadly disappointed. While there is a sport mode, Ford have opted for simple buttons mounted on the gear lever. There’s just no fun in shifting like this. At the minimum, it would have been nice to rock the lever back or forth to shift or steering mounted paddles, but alas those aren’t available.

While I can attest that above 1,600 rpm the Focus is incredibly zippy and responsive, below that there is a serious lack of torque; the engine relies heavily on its turbo for any usable power. All three models run the same 132kW EcoBoost with the next engine size only available on ST or RS models.

The test conditions were mainly city based, I achieved a fuel consumption average of 9.5L/100km over 720km. During short highway trips, the instantaneous fuel consumption with cruise control on would hover around the 3 – 5L/100km mark. I’m sure with more mixed driving the score will come closer to the ADR consumption of 5.8 – 6.4L/100km.

Ford offers the Focus Sport in 7 different colours. Unfortunately, all but Frozen White come at a premium of $450. The colours are

The Ford Focus Sport is a great everyday car. It looks amazing, interior is comfortable, the entertainment system is effortless to use.

It does lack initial take-off torque, however once that turbo spools up the Focus is a quick and nimble little beast.