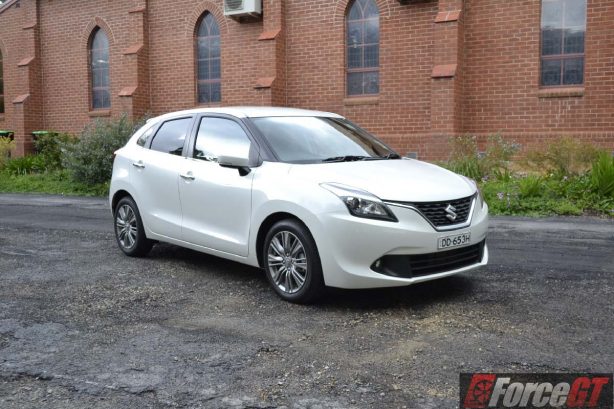 The Suzuki Baleno is Back!

The last time the Baleno was in Suzuki’s showroom, John Howard was our prime minister and ‘Can’t Fight the Moonlight’ by LeAnn Rimes was the chart topper.

In between, the Japanese brand has been trying to convince buyers with some of its full-sized, family cars, including the Liana and more recently, the S-Cross; but neither has managed to make significant impact.

Now, it seems Suzuki is back doing what it does best – producing great little small cars and SUVs.

Built at Suzuki’s Indian plant for the global market, the new Baleno sits on an all-new platform that will spawn an entire family of small cars in the next few years.

It arrives with two new engines: the 1.0-litre Boosterjet 3-cylinder turbocharged petrol engine powering the GLX at $22,990, and a more conventional 1.4-litre 4-cylinder petrol for the GL at $16,990. Both at driveaway prices. 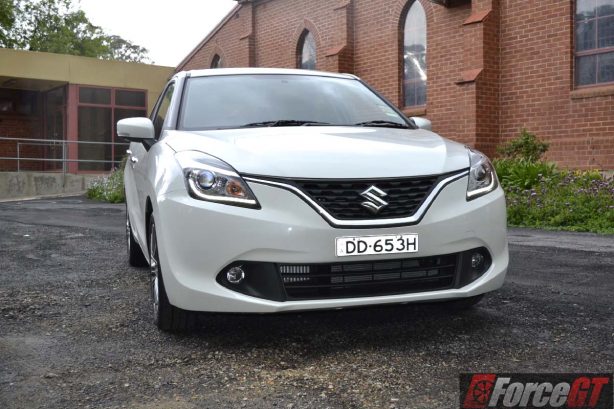 Inspired by the iK-2 concept from the 2015 Geneva Motor Show, the new Baleno’s ‘Liquid Flow’ design theme is a clear attempt at European design sophistication. While it succeeds in some areas (the front), more work is required in others (the back).

Its stylish front fascia is dominated by a ‘V’ shaped grille and a pair of sweptback headlights, complemented by a lower air intake that stretches the width of the bumper to give the car a wider stance.

Along the sides, the blacked-out A-pillars give the roof a floating effect, while the flowing shoulder lines gives the small hatch a touch of dynamism. 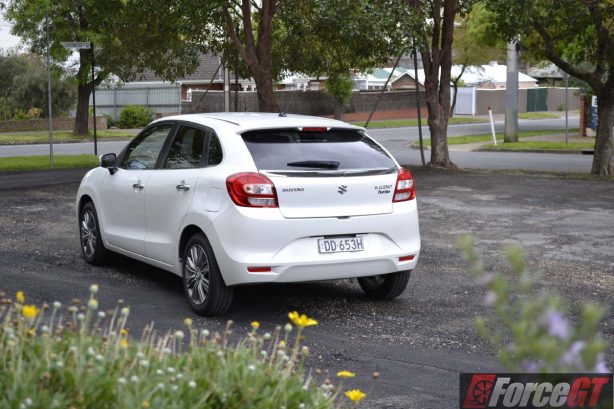 At the back however, the design is a little less successful. Despite an extra wide chrome bar that runs the full width of the tailgate, the rear appears too tall; not helped by the tallish taillights.

Inside, as expected at this price point, the interior is a mixed of hard plastic and faux chrome trim. They are however, not unpleasant and has a robust feel. The dashboard design is clean and ergonomically sound with standout features being the crisp instruments that light up an eye-catching electric blue, and the intuitive 7.0-inch infotainment system with built-in satellite navigation, Apple CarPlay – an impressive inclusion seeing they are all missing from the nearly four times more expensive Subaru Levorg GT! 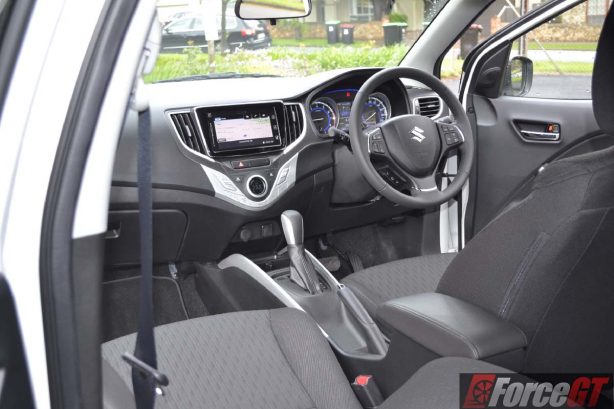 Its voice recognition is also one of the most effective and intuitive we’ve ever come across, understanding most instruction almost supernaturally.

The Baleno’s trump card though, is its interior and boot space. At 3,995mm long, it is slightly shorter than a Mazda2, yet more front seat headroom and rear legroom. Impressively, its 355 litres boot space is even bigger than the Mazda3 hatch’s and similar in size to the Corolla hatch.

A small family could easily fit comfortably in the Baleno with enough luggage space for a weekend away. 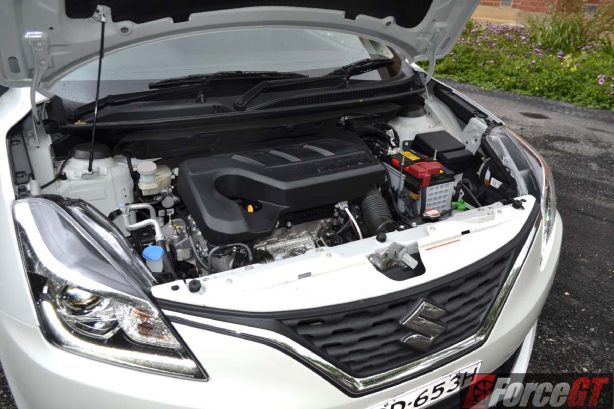 Suzuki’s new 1.0-litre turbocharged direct-injected three-cylinder Boosterjet engine is hardly a trendsetter but it is as good as most of its rivals.

Delivering 82kW at 5,500rpm and 160Nm at 1,500 – 4,000rpm, the engine is responsive and gutsy with an charming gravelly engine note. It is also generally free of the idling shivers typical of triple cylinder engines due to the rocking motion that their firing order imparts.

Match with a 6-speed automatic transmission and crisp throttle, the GLX is a relatively fun hatchback to zip around town or even on a weekend away. Its in-gear acceleration is also a winner, making overtaking a breeze. 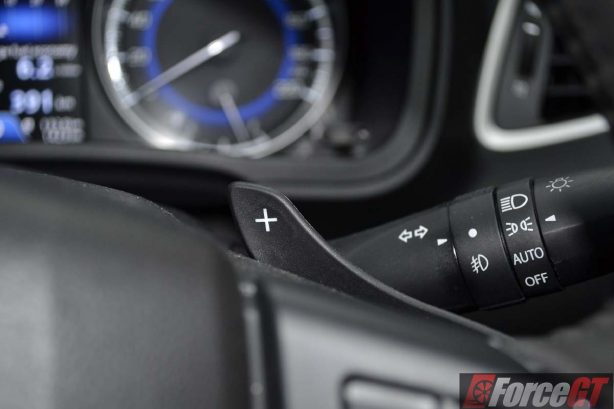 Despite its lithe sub-one tonne kerb weight, the Baleno feels confident on the fast lane although said confidence erodes away slightly in the corners. Its softly sprung suspension and leisurely steering also makes it less eager to change direction compared to its smaller and more agile sibling, the Swift.

Stepping down to the GL, the power deficit is definitely noticeable. It lacks the get-up-and-go and charm of the GLX.

The 1.4-litre aspirated four-cylinder engine generating 68kW at 6,000rpm and 130Nm at 4,000rpm is also slightly noisier on the freeway thanks to only four gear ratios in the auto. 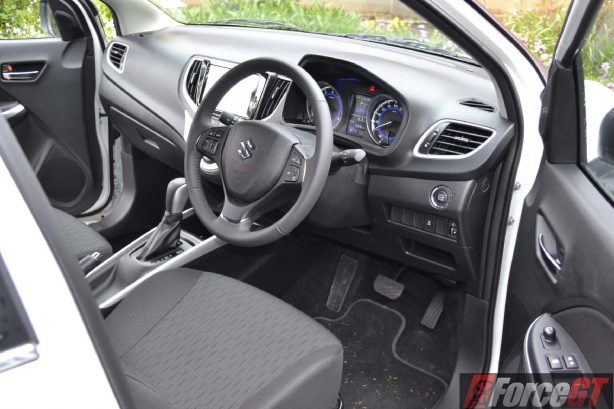 We find no fault in quality of the Indian-built Baleno. All panels are well aligned although its doors feel a little on the light side.

There are no squeaks or rattle in the cabin, either.

Some of the trims, especially those on the climate control do look cheap but it’s not unexpected at this price range. 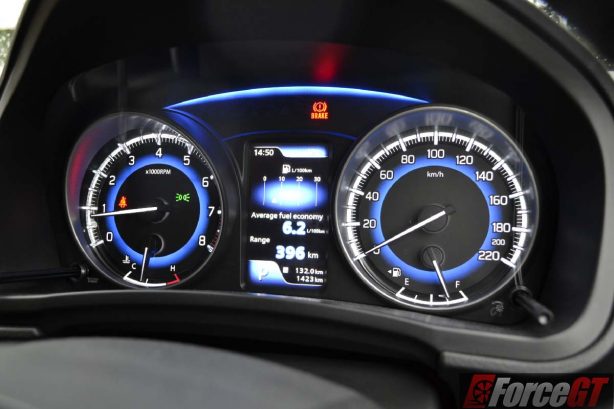 Meanwhile, the GL is slightly thirstier, returning 6.3L/10km on the urban cycle and 5.5L/100km on the freeway. 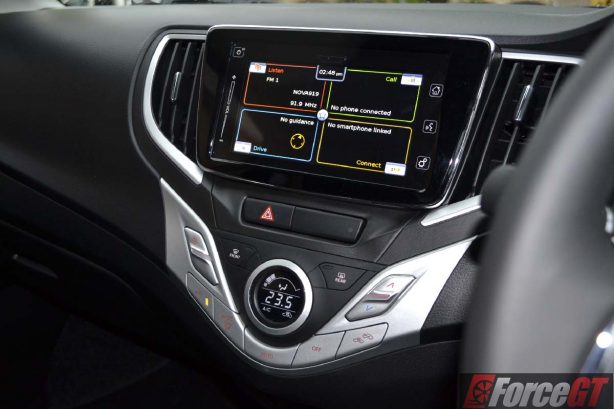 This is what Suzuki does best: building practical small cars that are fun to drive and loaded with value; and the Baleno is testament to that.

With great economy and low running costs, its value is hard to ignore.

We would pay a little extra to get the GLX with its charming 1.0-litre turbo triple and better kit.