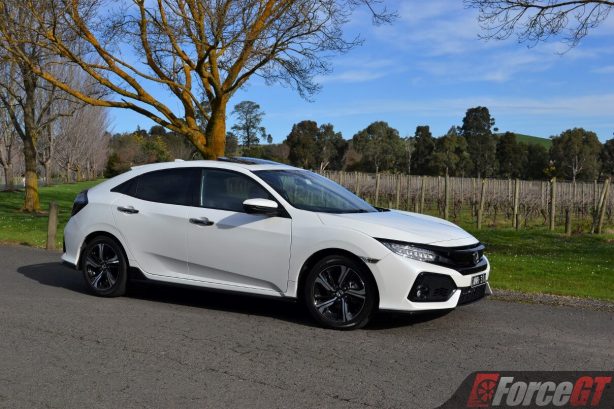 No, it’s not the Type R. But the new Honda Civic Hatch certainly does look like a hot hatch. It’s been far too long we needed a boldly styled, unrestrained and youthful Honda that the average Joe could buy, a Honda that harks back to its glory days of the early 90s, a period when Honda design was making everything else looked a generation behind. And now it’s finally here. The 10th generation Civic Hatch is, by far, the sharpest looking small car in its class.

It ought to be, if the Civic was to take on highly accomplished nameplates such as the Mazda 3, Volkswagen Golf and Hyundai i30. Tested here in the range’s sportiest flavour, the RS, the new Civic Hatch marks the return of Honda from over a decade-long of slumpiness. There are the beefy front and rear bumpers, sharp lines and bold creases, striking C-shape tail lamps and a handsome RS-specific body kit finished in gloss black which includes a centrally mounted twin tip exhaust. This thing is eye-catching, to say the least. Welcome back, Honda! 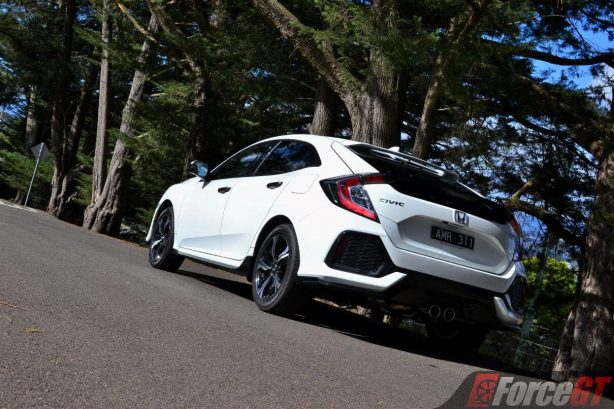 Pick any variant you like as long as it’s the 1.5 turbo (pay the premium), for its added power and stronger, flatter torque offering a much richer and more satisfying drive. Peak torque of 220Nm is spread across a wide engine range of 1,700-5,500 rpm, which allows easier access to engine performance and in turn, benefiting fuel economy (our test car averaged 6.8L/100km in over 800km of real world driving). 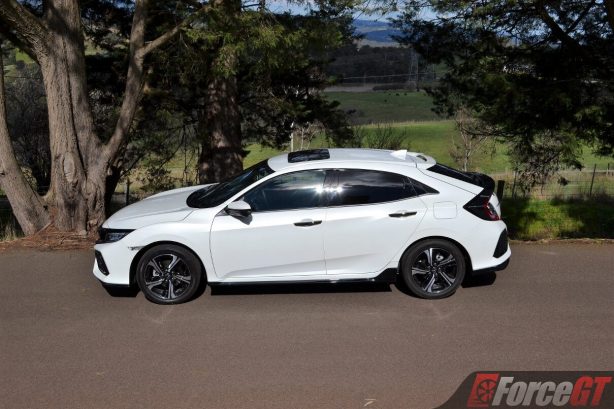 The turbo four is matched to a new CVT (no manual is offered on the new Civic range) that is surprisingly smooth and responsive, with none of the droning and revs flare that we come to expect from such transmissions.

Because there is only one ratio that varies continuously to keep the engine in its optimum power band, the ‘stepless’ drive is both refined and relax around town, if a little uninspiring. The paddle shifters that introduce virtual ‘steps’ into the transmission are handy for enthusiastic driving, though there’s still no escaping the CVT’s elasticity and ultimately, a conventional auto or dual-clutch are still more rewarding for any form of sporty driving.

The Civic’s steering is direct and relatively quick but could use with a bit more feedback, especially for an RS model. Its ride is also more compliant than ever, rounding up bumps and ruts in the manner of a larger car.

But the biggest progress is in the way the Civic Hatch handles around the bends. Its new found dynamism endows the car with sure-footed and confidence-inspiring handling that was not seen in the previous three generations. For a family hatch, it feels agile and alive, thanks to a lower center of gravity and much tauter underpinnings (52 percent stiffer compared to the old model). This is easily one of the sharpest handling cars in its class.

Noise, vibration and harshness (NVH) levels have also been kicked up a notch, with superior ride isolation, as well as chassis vibration control. The new Civic is refined and quiet with both engine and tyre noise well suppressed. 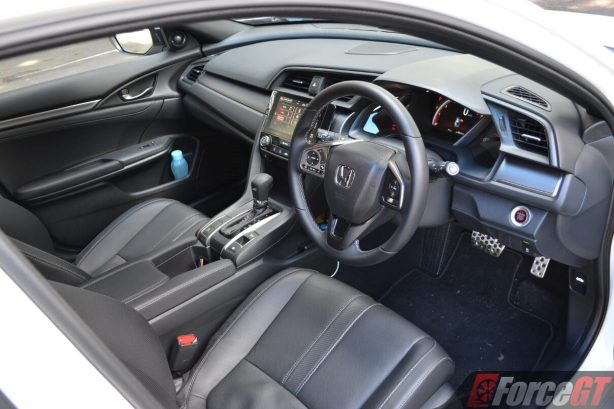 Another major step up is the cabin, which has been given a major push in quality and a lift in space thanks to a wider platform. The two-tier dashboard of the outgoing model has been replaced with a modern driver orientated cockpit complete with a clear, space-age digital instrument panel. Most contact points also have soft-to-the-touch materials while specks of aluminium-look trim lighten up the cabin. Fit and finish of the Thai-sourced Civic Hatch is generally good, with tight fitment and well-aligned panels.

The smartly designed interior includes a myriads of storage compartments, including one hidden beneath the center console and a sizable center storage. Both front seats are comfortable with good support. Typical of Honda, forward visibility is excellent thanks to the vast windscreen and thin A pillars. The driver also sits 35 mm lower in the new Civic, giving it a sportier feel.

Rear passengers will enjoy the equally spacious accommodation with increased legroom, aided in part by the 30 mm longer wheelbase, but not the absent of rear air con vents. 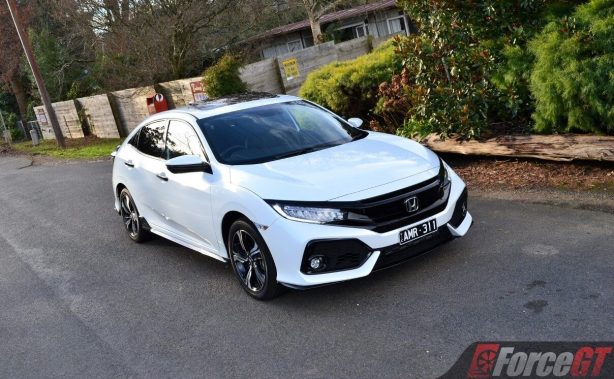 With 414 litres of boot space, the Civic Hatch’s cargo carrying capacity is one of the largest in the segment, eclipsing that of the Mazda3 Hatch (308 litres), Toyota Corolla (360 litres) and Volkswagen Golf (380 litres). Be mindful though, that the RS has a smaller boot at 330 litres due to room lost to accommodate the centrally mounted twin exhausts and mufflers. For more space, the flat boot floor can be further expanded via the 60/40 split folding backrest.

To face off tough competition, the Civic Hatch is generously equipped. All variants get LED daytime running lights, taillights with LED light bars, cruise control (VTi-LX gets adaptive cruise control), climate control (dual-zone on VTi-L and above), and auto up and down power windows (front only for VTi and VTi-S).

Also standard is the 7-inch touchscreen infotainment with Apple CarPlay and Android Auto, Bluetooth and USB. It features a modern but still cumbersome interface which could do with larger buttons. The touch sensitive volume buttons are difficult to use while driving – can we have the good old volume knob please, Honda? 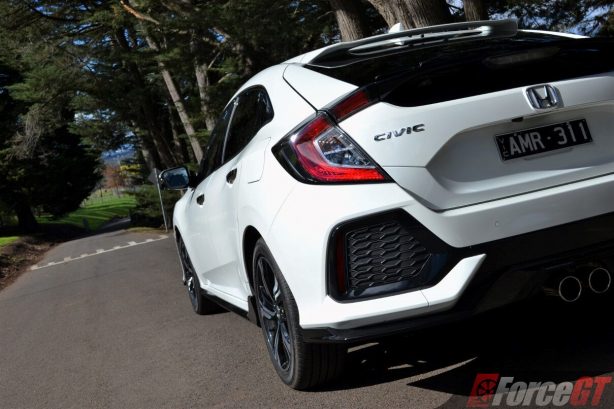 Also fitted on the VTi-S and up is Honda’s rather gimmicky LaneWatch feature which offers a camera view of the passenger-side roadway on the center touchscreen when the left indicator is engaged or the LaneWatch button is pressed. We would much rather have the conventional Blind Spot Monitoring system on its rivals.

It is also the only model with embedded satellite navigation system, with the others relying on data zapping mobile map.

Finally, a Honda Civic Hatch that could give the best in class a run for their money. It’s the most convincing and confidence-inspiring Civic Hatch we have driven in a long time. And along with sporty looks, an efficient turbo engine (VTi-L and up), great interior space and comprehensive features, the new 10th generation Civic Hatch should be right at the top of your small car shopping list.