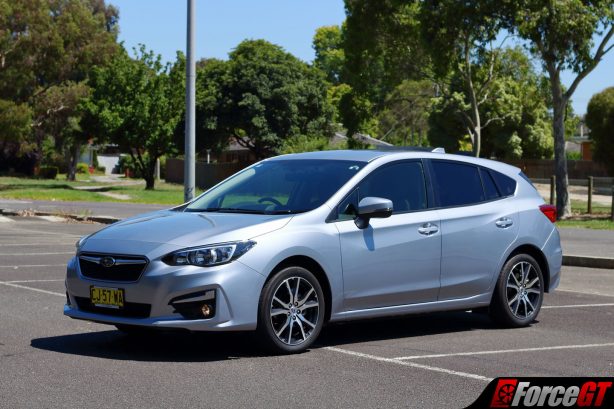 There’s a lot of pressure on the new Subaru Impreza to perform and not just because it’s a new model. More importantly it’s the first model from Subaru to use their new Subaru Global Platform which is set to be used on all new Subaru models going forward. And since the 2017 Subaru Impreza is the first model to make use of the Global Platform, how well it performs will set the stage and expectations for all models to follow so let’s get started.

The design team at Subaru have gone for a clean and sleek appearance on the new Impreza that gives it a grown up style. The front shows off a little Subaru DNA but from the side or rear you’d be hard pressed to pick the manufacturer at a glance. With such a conservative design style the Impreza is sure to retain its modern appearance and age well. 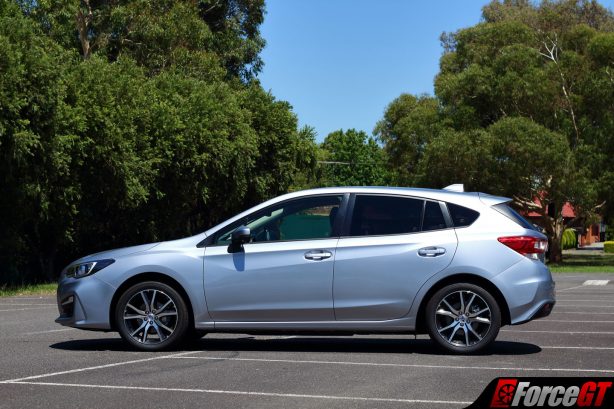 For a while now it’s been no secret that Subaru have been attempting to position themselves as a premium auto maker and the interior of the new Impreza drives this point home. There’s been a lot of thought and effort put into the design with a focus on the details.

The infotainment screen is integrated seamlessly into the dash whereas rival manufacturer efforts come off as an afterthought in many cases. Double stitching has been used lavishly throughout the cabin and there’s definitely more soft touch material used than plastics which further adds to the premium feel within.

Every time you step inside the new Impreza you can expect to feel a sense of pride sweep over you as it’s just such a pleasant place to be. My praise isn’t endless as there is room for improvement from Subaru yet. On top of the steering column sits a flexible cover that looks very out of place, on sunny days the instrument cluster is covered in sun glare and the headrest can wobble just a tad when you rest your head on it. These are minor downsides to what is a well thought out and constructed interior. 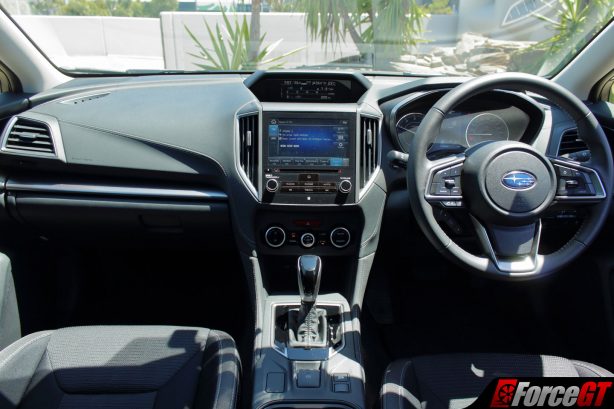 There’s no lack of displays vying for your attention placed around the dash, three in total. The infotainment display being the largest is dedicated to all things media related except for when the reversing camera takes over while backing up. Located above the infotainment display is a secondary display to showcase vehicle information from a number of selectable screens. And finally there’s the trip display presenting the usual array of information.

Both the trip display and the secondary screen can be operated from wheel mounted controls and become intuitive to control in no time at all. Phone, media and cruise controls also adorn the leather clad wheel which sports paddle shifters on the rear. Initially the sceptic in me questioned the need for paddle shifters in the CVT based automatic. They proved their worth under situations where additional control is needed, like preparing for an overtake and ensuring the right gear is selected to get the job done quickly. 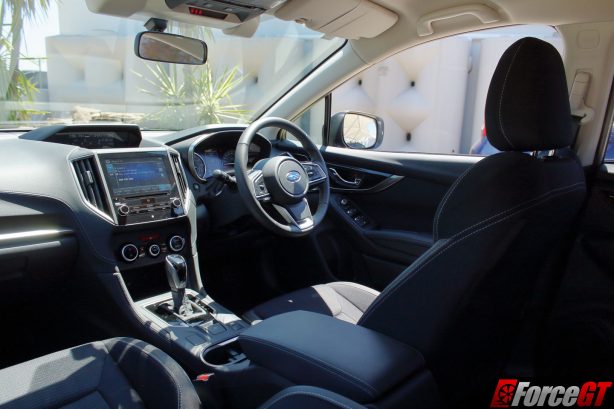 Visibility from the driver seat is decent with excellent A pillar visibility thanks to the small window bracket just fore of the side mirror. We can expect this trait to extend to new models built on the Subaru Global Platform so an engineering win there for Subaru.

The seating position was quick and easy to adjust for comfort but for the 2.0i-L hatch model we tested doesn’t come with an electrically adjustable seats. The seats provide great comfort for long trips but the lack side bolstering support takes away any cornering fun.

Two people can fit in the rear no problems and with headroom to spare, one more can join them if they’re willing to share some personal space. Further back there’s a usefully large boot complete with cover which increases from 345 litres up to 795 litres once the rear seats are folded down. 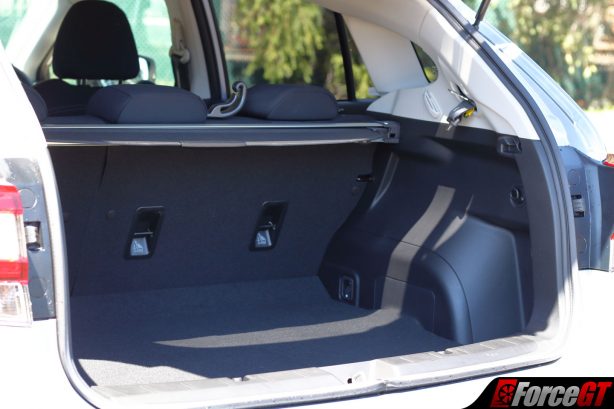 So far so good for the new Impreza but does the trend continue where it counts? How does it perform? As is tradition from the earliest days of the Impreza, the 2017 model is powered by a 2.0-litre 4 cylinder boxer engine. This time around it puts out 115kW at 6,000 rpm and 196Nm of torque at 4,000 rpm. It’s enough to never feel lacking for power and the delivery is very smooth thanks to the boxer layout.

The CVT gearbox hooked up to the engine didn’t put a foot wrong. It was smooth and responsive enough to select the right gear for the task at hand. The addition of wheel mounted paddle shifters allows for driver engagement if wanted and under manual control the shifts remained responsive enough to make you feel in control rather than merely issuing suggestions and waiting for the car to comply. One area that could use improvement is the fuel saving start stop feature which occasionally starts with a minor jerk. 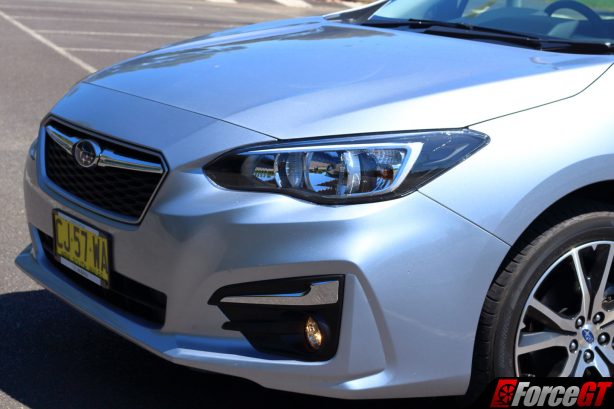 How well the 2017 Subaru Impreza handles all comes down to just how well the underlying platform has been engineered, of which Subaru has done a mighty job.

The Impreza feels like a car that wants to be driven, it urges you to take that corner with more speed and to clip the apex on the way through. Improved chassis rigidity and the low mounted boxer engine come together to deliver a driving experience that will sneak a smile onto your face each trip. Changes in direction are responsive and there’s surprisingly little body roll for a hatchback.

The rear suspension features a double wishbone setup which is usually reserved for more sporting vehicles and keen drivers will be happy for the inclusion.

The ride is slightly firmer than other cars in the segment but not too hard that your spine will want a restraining order. You will need to bleed off just a hint more speed when navigating aggressive speed bumps but this is a small price to pay for such a well driving chassis.

One minor issue is that the car will mildly track the contours of the road requiring little adjustments on poor roads to keep it straight. There’s a very good chance you won’t even pick up on this when driving the Impreza but if it’s something that irks you, it can easily be fixed on any car with a little more toe in on your next front wheel alignment. 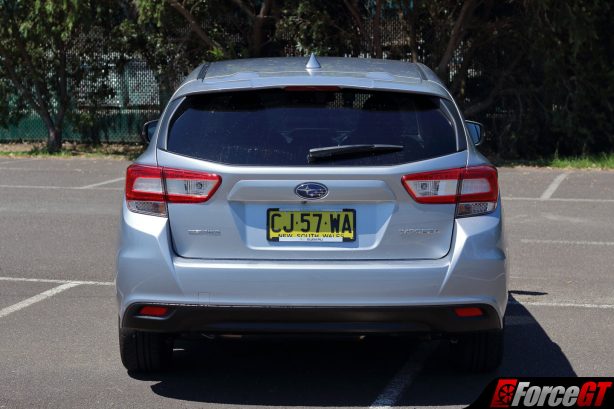 Backing up the impressive chassis is the braking performance and to me, the most impressive feature of the car. The brakes have a great feel, very accurate and receptive to minor input changes on both light and heavy braking, offering tons of confidence as a result. The week following my test drive of the Impreza I had the 2017 Subaru BRZ and the whole time I’d wished it had the same brakes as the Impreza, they’re that good.

Fuel consumption is average at 7.6L/100km for a combination of both suburban and city driving. Subaru claims a combined figure of 6.6L/100km can be had but we were a little shy off the mark on our test. An extra 10kW of power or a minor sacrifice of top end torque in favour of more mid range torque would have trimmed fuel usage and added just a hint more fun to the driving experience. 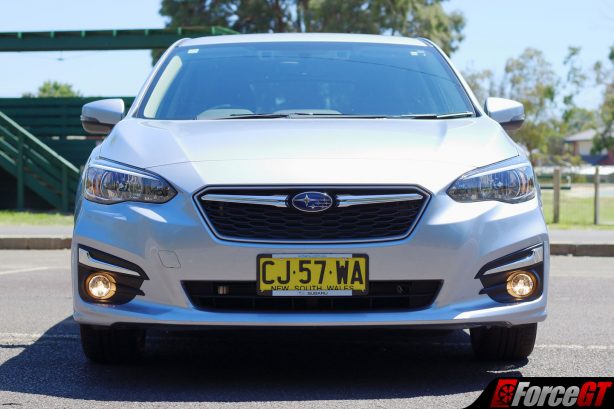 When it comes to features the new Impreza delivers. The infotainment system supports both Apple CarPlay and Android Auto, USB connect, Bluetooth, Aux in and NFC for establishing a device connection, there’s even a CD player. Audio is provided thanks to a 6 speaker setup and the quality produced is definitely up there with crisp high’s, punchy lows and a solid mid range.

On the safety front, reversing cameras are standard on all models and a welcome inclusion even with the decent rear visibility. The Subaru EyeSight driver assist system is present and adds an extra level of active safety to the car. You’ll mainly make use of it for the active cruise control which works a treat though can be a little cautious at the longer distance settings when acceleration is required.

Also part of the EyeSight system is lane departure warning, collision mitigation and collision warning further enhancing the active safety all around.

As with virtually all Subarus, the Impreza comes equipped with AWD for extra traction. Day to day you’ll rarely even notice the system exists but on icy or dirt roads the additional traction enhances the Impreza’s capabilities and adds confidence in tricky situations. And to finish things off you also get keyless entry, daytime running lamps and tyre pressure sensors.

The Subaru Impreza is the total package and in my opinion one of the best players in the hotly contested small car segment. It does everything right by offering a great driving platform with a well thought out premium interior. It’s smooth and refined with tech and toys you’ll use frequently and the AWD system grants the Impreza additional capability over its 2wd counterparts.

I had high expectations when picking up the Impreza and I can safely say it’s exceeded all of them and set the bar very high for rivals.

It seems Subaru can’t get enough of fiddling with their performance duos. Well, at least …