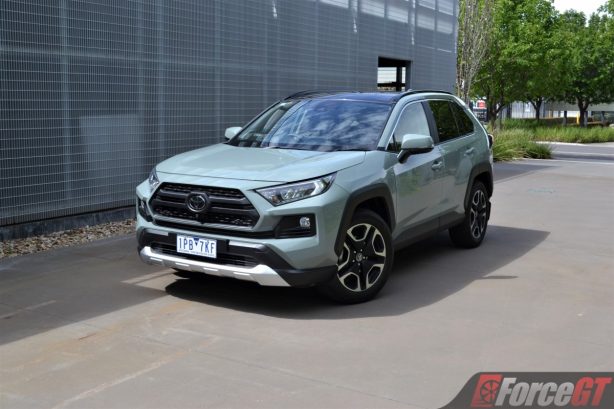 First introduced in 1994, the Toyota RAV4 is one of the pioneers of the compact crossover segment. As its name suggests, the RAV4 – short for Recreational Activity Vehicle 4-wheel-drive – was designed to be at home both on and off road. It was very much sorted for everything life threw at it, from school runs and trips to the shops to weekend getaways and camping trips.

Five generations later, the RAV4 finds itself in a very different landscape, one where the SUV is the quintessential family car. Replacing the humble sedan in millions of driveways around the globe, today’s SUV needs to have the road manners to daily drive its owner to and from work, yet capable of hauling the family and luggage in great comfort across vast country. It wouldn’t mind a bit of dirt but the SUV has essentially become a part of urban life.

Naturally, the RAV4 has moved on with the trend over the years. The ‘recreational’ part of its name has become a bit blur. So, to fix that Toyota has launched an ‘Edge’ variant of the RAV4 to bring back its roots. As the new range-topper, the adventure-focused RAV4 Edge pairs a mechanical all-wheel drive system with a 2.5-litre petrol engine and is priced at $47,140 plus on-road costs.

The RAV4 Edge is what we will be taking a closer look at today. 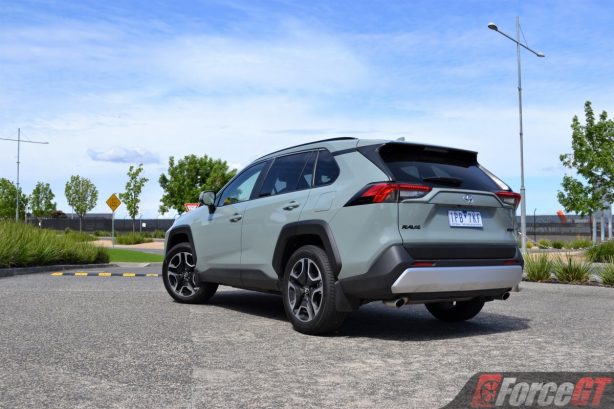 While looks are subjective, I personally think the Edge is the best looking variant in the RAV4 range. The design of the new RAV4 itself has seen a total transformation from a rather bland previous generation to the bold and rugged shape of the current model, and the Edge takes the styling one step further with a more aggressive front and rear bumper design. With beefier wheel arch mouldings, this thing looks tough. 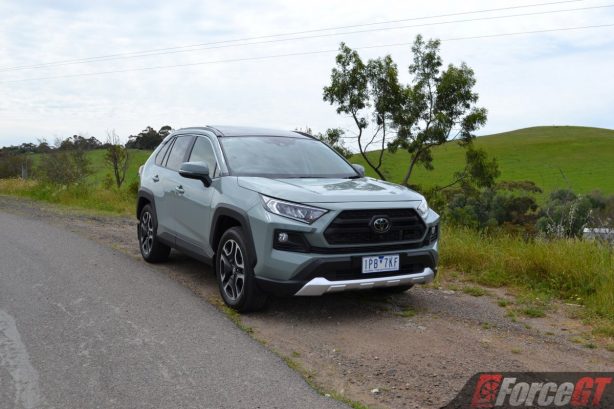 The new RAV4 Edge is 10mm longer, 20mm wider and 25mm lower than the previous model, with a wheelbase that is 30mm longer. With the larger footprint and lower height, the new RAV4 does look more squat and muscular than its predecessor.

Like the exterior, the cabin of the new RAV4 has also been completely redesigned – a good thing as the old cabin was really just average at best. Gone is the chunky, heavy-handed dashboard and in its place a much sleeker and modern cockpit that is much easier on the eye. The horizontally layered dashboard design gives a sense of space, while the infotainment touch screen perched higher up in the center is more in your field of vision. Ergonomics are top notch with all buttons and knobs within easy reach, with the exception of the column of buttons to the left of the infotainment screen which are a bit of a stretch for those vertically challenged. 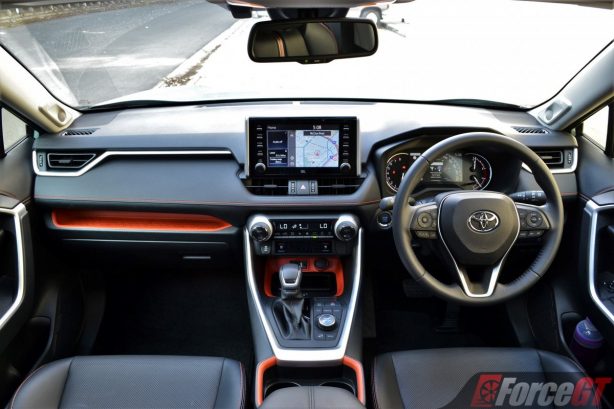 There’s certainly an upmarket feel to the interior, with the quality of the cabin materials a big leap from before. The upper trims feel nice and soft with a fine texture to them, while the contrast stitching looks neat and delicate. While I’m willing to look past some of the lower trim hard plastics, I don’t quite see the point of those bright orange rubber trims splashed across the front storage compartments and cup holders. Do note that, however, this is an Edge specific trim colour, which I assume is designed to spice up the cabin to match its adventurous nature.

The seats are very comfortable and supportive, never mine if they are trimmed in “Softex” synthetic leather. Both front seats are heated and cooled. The driver’s seat is multi electronically adjustable with lumbar support, but strangely it lacks seat memory – a feature fitted to the one grade lower RAV4 Cruiser. 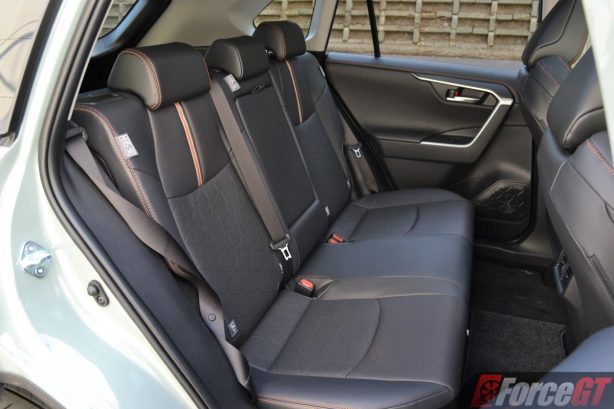 With the longer wheelbase, rear seat legroom has also improved and the wider dimension means three adults aren’t as much of a squeeze as before back there. But it’s the boot that has seen the most significant increase in capacity. It’s now a capacious 580 litres and features a two-level reversible floor for added functionality (not available with full-size spare wheel option). The cargo space can be further expanded by tumbling the 60/40 split folding rear seats, though sadly, the seats don’t come with a remote release from the boot area.

The RAV4 Edge’s tailgate is conveniently power operated, but that warning beep that sounds during opening and closing is annoyingly loud, and there’s no way of disabling it.

Storage compartments are aplenty around the cabin. In addition to the centre storage and cup holders, there are deep storage trays in the dashboard, large glove box and phone storage tray just fore of the gear lever. Elsewhere, the door pockets are thick and come with a bottle holder. Oddly though, the back seat pocket is only found in the back of the passenger seat. 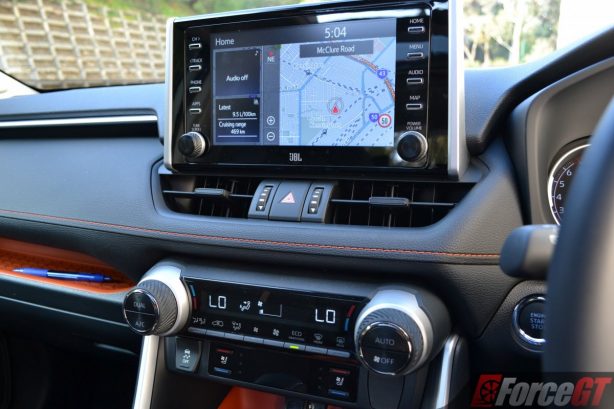 One thing that bugs most Toyota’s is the infotainment system and sadly the RAV4 is no exception. Compared to rival systems, the RAV4’s 8-inch infotainment interface looks dated with certain buttons on the navigation screen too small to afford easy selection while driving. And while it incorporates Bluetooth connectivity, AM/FM/DAB+4 radio, Apple CarPlay and Android Auto are still lacking. The voice recognition feature is also a bit clunky, often misinterpreting commands.

The RAV4 Edge is powered by a 2.5-litre normally aspirated petrol engine developing 152kW at 6600rpm and 243Nm of peak torque from 4000 to 5000rpm. Paired with an eight-speed automatic transmission, the Edge drives through a mechanical all-wheel drive system that is able to deliver a front/rear torque split of between 100 per cent to the front wheels (therefore saving fuel) and an even 50:50 split across front and rear wheels. 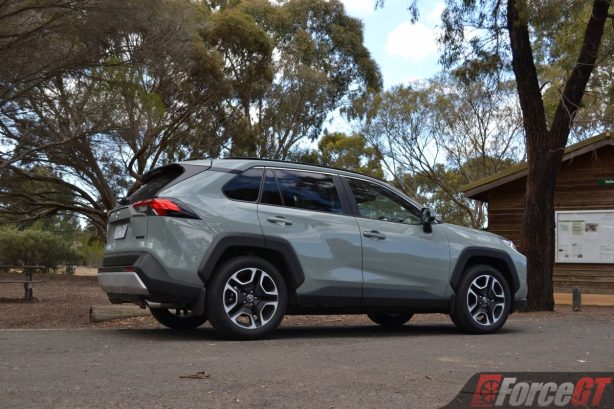 A dynamic torque vectoring system can also independently control the amount of drive torque delivered to the left or right rear wheels depending on the road surface conditions. The AWD system in the Edge also features a multi-terrain select system that offers different modes for mud and sand, rock and dirt and snow environments. There is also a downhill assist feature.

Based on the Toyota New Global Architecture (TNGA), the RAV4’s front suspension is an improved MacPherson strut with revised geometry while the rear is a multilink type with stabiliser bar that is upgraded with new dampers, geometry and calibration.

The ruggedised AWD drivetrain is exclusive to the Edge variant and delivers superb traction on all but the toughest of terrain, with effective torque distribution to the wheels with the most grip. While the on-demand AWD still lacks the quick response of full-time systems, it’s more than capable of traversing the odd rough tracks to camp sites or crest a hill or two. Its off-road capability almost rivals that of the Subaru Forester and Jeep Cherokee. Beware though, as the front departure angle isn’t that great due to the low chin on the front bumper. 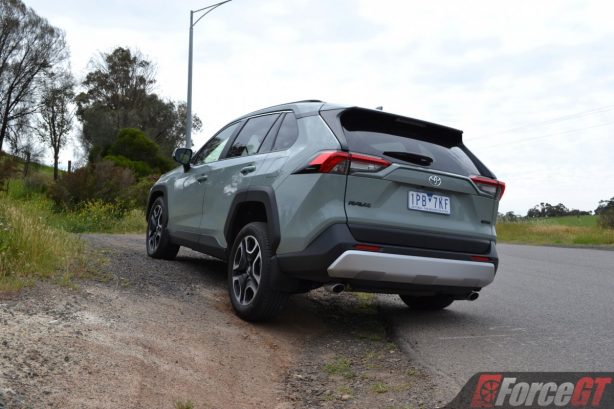 Back on the road, the engine is eager in most proceedings, though the higher rpm where peak torque is developed means more often than not it needs to be revved to get going. And it isn’t the most refined unit when poked as it’s quite vocal above 4000rpm. It’s apparent then that this engine is tuned more for durability than refinement, like those ones in utes.

The eight-speed auto does shift smoothly and intelligently though, working quietly in the background without ever bringing attention to itself.

For a high-riding SUV, the RAV4 Edge handles the bends with confidence. It’s no sports car but the nose turns in sharply and body movement is kept well in checked at all times. The chassis feels tight for a large vehicle, which affords it a car-like driving feel.

The steering is well weighted and provides fair feedback for an electric rack, while the brakes are strong and consistent. 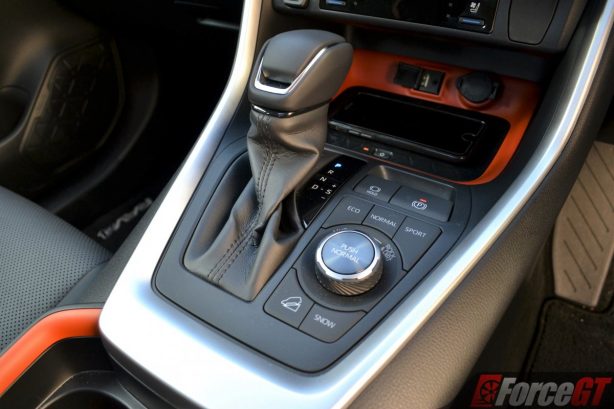 For the drive around town, I find the RAV4’s low speed ride quality leaning slightly on the firmer side but once cruising it’s perfectly happy smoothing out bumps and soaking up undulations. On the freeway, the RAV4 is just smooth and quiet. It will make a good road trip car.

In terms of servicing the RAV4 Edge requires a visit to the dealer every 15,000km or no longer than 12 months, which ever comes first. Every new RAV4 is now covered by Toyota Service Advantage capped price servicing at $210 per service for the first 5 years or 75,000km. Bargain.

Fuel consumption is rated at 7.3L/100km on the combined cycle for the Edge’s 2.5L petrol unit. On test with close to 500km of mixed roads traveled it managed to return 8.4L/100km which isn’t too far off the official figure. Freeway driving will see the engine barely idling and fuel economy hovering at a very thrifty 6.0L/100km.

The original Toyota RAV4 was fun, but subsequent generations had become just safe and sensible. With the latest fifth-gen RAV4 however, it seems the spark is back.

The top-spec RAV4 Edge is packed with versatility, practicality and safety that will no doubt welcomed by families. It’s also interestingly styled inside and out. Backed by a good reputation for dependability and reliability, the new RAV4 makes a strong case for itself in a tight market segment.