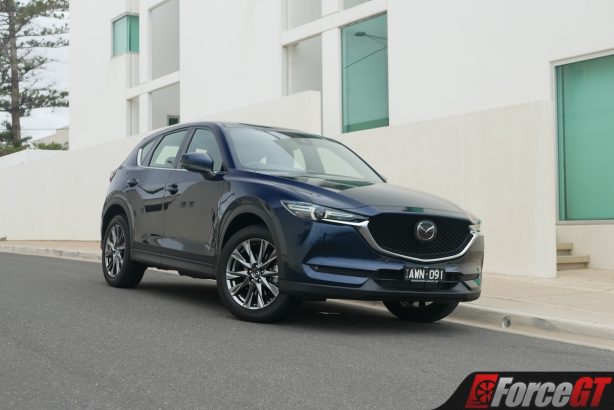 It’s only been a little over six months since we last took a look at the Mazda CX-5 – the best-selling SUV in Australia – and not even two years since the current body style launched, yet Mazda’s engineers have once again fettled it for the 2019 model year, and this time around, the focus is on performance.

While 2018 saw the introduction of a new twin-turbo diesel mill as a placeholder flagship engine, this 2019 update sees the CX-5 receive the engine the entire motoring world, including us in our last write-up on the CX-5, seems to have been begging for – the 2.5-litre turbocharged four-cylinder petrol unit from the CX-9.

With the CX-5 offering what’s been consistently regarded as one of the best chassis in the medium SUV class, it was only a matter of time for a more performance-oriented version to come along. Except, that’s not exactly what Mazda are going for here. 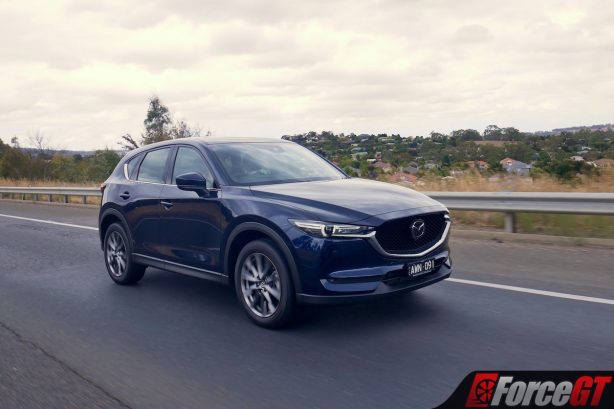 Certainly, it’s got some power under its belt, with the force-fed 2.5 churning out 170kW and 420Nm – a class-leading torque figure among petrol-powered rivals – but the 0-100km/h time is a somewhat leisurely 7.7 second stroll rather than a frantic sprint, thanks to the tall gearing of its six-speed automatic transmission – which, on the surface, seems behind the times in a world of dual-clutches and eight-speeds.

There aren’t any low-profile tyres and oversized blingy wheels or a gaudy body kit, either, and not even a set of paddle shifters have been tacked on behind the steering wheel. Yes, it might have more go, but the CX-5 Turbo is, in reality, more about luxury.

Looks wise, little has been changed to differentiate the new turbocharged models from any others in the range. Opt for the top of the range Akera variant like we have on test here and you’ll get a different set of 18-inch alloy wheels to before, but that’s it on the outside. There’s not a single turbo badge or enlarged exhaust pipe in sight, so think of this as more of a factory sleeper than some wannabe showstopper. 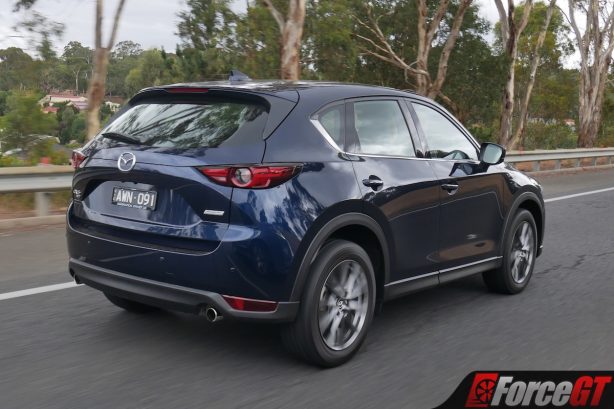 It’s not like there would have been any need to alter the CX-5’s looks anyway, as it’s still a rather good looking thing with its sporty nose and strong character lines. In this shade of Deep Crystal Blue Mica, which is available at no extra cost, it looks particularly classy, yet still has enough shine to it to stand out among the crowds of boring white and silver cars filling every carpark across the nation.

On the inside, however, there are a few more notable changes to be seen. To help it feel even more plush than before, gorgeous chocolatey-brown Dark Russet Nappa Leather upholstery is now available only on the top-spec Akera, with it also sporting real wood trim inserts to compliment the new interior shade nicely. 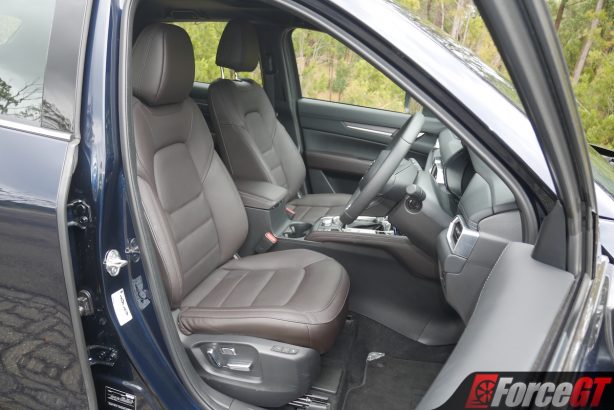 Additional interior niceties have been added too, including ventilated seats up front – both front seats and the outboard rear seats are also heated – and a heated steering wheel, the controls for which have been fitted to a revised climate control panel mounted lower on the dashboard.

Further mirroring updates recently made to the CX-9, a seven-inch TFT screen has been fitted to the gauge cluster to handle the speedo and trip computer duties. Additionally, Apple CarPlay and Android Auto have now been integrated into the MZD Connect infotainment system as standard, finally.

Unfortunately, however, it still retains the smaller seven-inch centre screen, rather than the eight-inch unit seen in the CX-9 – the only thing we asked to see in the next CX-5 update last time around that hasn’t been introduced.

With these additional refinements and features, it helps the interior of the CX-5 remain a lovely place to spend time both stuck in traffic or on longer drives in the country, with the seats feeling very comfortable and supportive in the right places, along with excellent legroom and headroom for both rows.

Does it look and feel as upmarket as Mazda hopes you’ll think it is? You betcha, but then the CX-5 always has felt like more of a premium item than you might expect, meaning that’s not really a surprise at all. What’s more surprising is how it performs with some turbo power under the bonnet.

The 2.5-litre turbo mill is available as an option exclusively on the top-two GT and Akera grades, with its naturally aspirated counterpart not only still in use lower down in the range, but still being the standard-fit petrol unit on the volume-selling range-toppers. 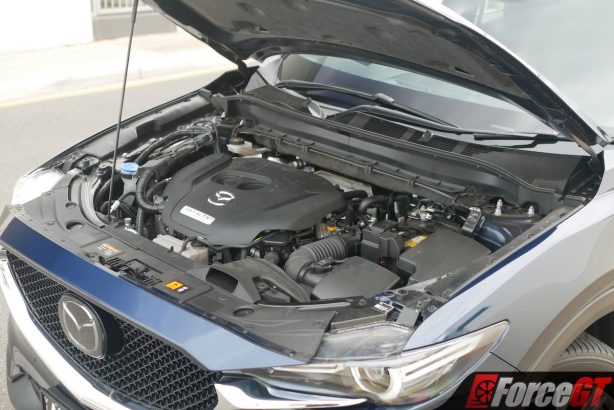 Although Mazda reckons there’s still a market for the plush interior with a less-powerful engine, and I’m sure there very much is, I’m going to tell you right now that opting for the turbo is definitely the way to go, as it helps the CX-5 drive the way it always should have from the get-go.

While in the larger, heavier CX-9 in which this engine made its debut, it feels like a silky-smooth and effortless power plant that helps it cruise along nicely, it feels eager and excitable in something smaller and lighter such as the CX-5. It’s certainly no less thirsty, however, with it using the same indicated 11.5L/100km that we recently saw while running a front-wheel drive CX-9.

It should also be noted that with standard all-wheel drive, there’s next-to-none of the torque steer issues exhibited in the exclusively front-wheel drive Mazda6 to be seen. 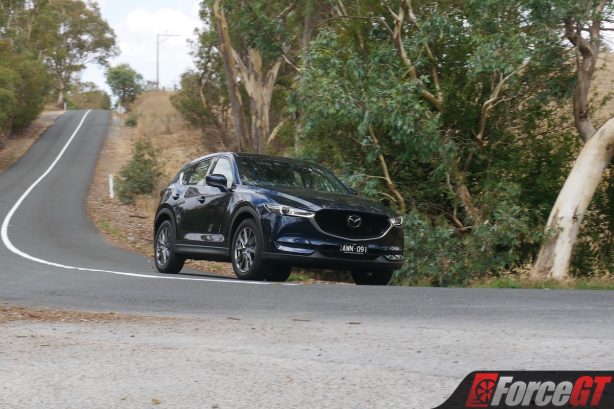 Even though the 170kW peak power figure isn’t what anyone would call particularly remarkable for a proportionally large-displacement engine like this, it’s the diesel-like 420Nm slab of torque that impresses most. With great low-down pickup and such a smooth power curve right to the top of the rev range, you can simply wind it out through the tall gears of the six-speed auto ‘box, with it feeling effortless the whole way.

Is it faster driving this way, rather than keeping it close to redline the whole time? No, probably not if the numbers are anything to go by, but then it feels far smoother and more predictable than some cars offering transmissions with eight or more gears. It’s less busy and fussy, and more point-and-squirt. It largely negates the need for shift paddles, too, as you’re never really needing or wanting to swap cogs too often.

What’s more impressive than the newfound power itself is the way the CX-5 manages it, as it goes to show just how much this chassis can handle. While the NA petrol in particular doesn’t quite have the chops to expose the CX-5’s limits, the speed you’re able to build up on the straights in the turbo leads to it showing off just how well you can keep the speed up through the bends. 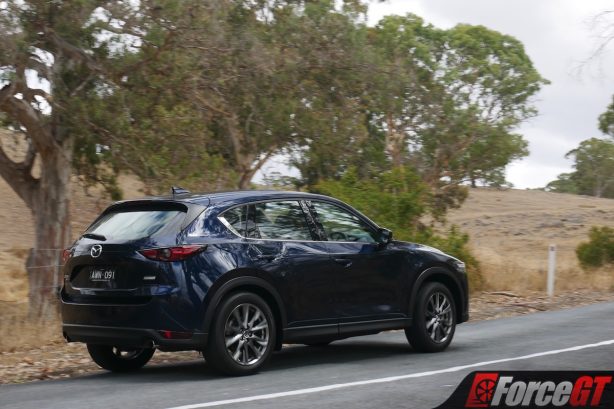 You can clearly feel Mazda’s ‘G-Vectoring Control’ torque-vectoring system shuffle the power around and brake individual wheels as you fang it through the bends, although it’s in an informative way, not a jarring one. It certainly gives you fair warning of when you’re approaching the limit of adhesion, although you’ve really got to push it hard to get close – harder than most would consider pushing any SUV.

As such, most drivers won’t feel like there’s much more left on the table. Sure, it could be faster in a straight line, but that’s not all the fun there is to be had from behind the wheel. It’s on tight, twisting roads that it really shines – even ones with appallingly bad surfaces like those we pitted it against around the Adelaide Hills.

Although its suspension may err on the firmer side to aid with keeping it as balanced as possible through the twisties, it’s still incredibly absorbent of mid-corner bumps, with no rack rattle or sharpness to be detected – something that aids it with being a comfortable cruiser or pothole-traversing city-dweller as well. It really does have a few feathers in its cap, this thing. Perhaps most importantly though, performance is now one of them. 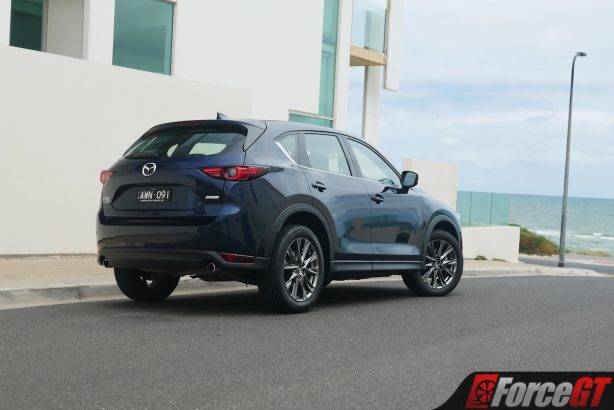 The thirst of the punchy turbo engine may see its score remain the same as the diesel we last tested, but believe you me, the CX-5 Turbo is definitely a better car.

With the new kit that’s included – ventilated seats, heated steering wheel, smartphone mirroring, digital instrument cluster, and perhaps most importantly, a brown leather interior – and the fitment of the CX-9’s engine, it’s addressed everything we asked for last time, bar a larger infotainment screen, and shows that Mazda has been listening.

It handles incredibly well and has more than enough power to impress, but still rides comfortably and offers up a really lovely interior. It looks perfect anywhere, too – sporty enough to impress your mates, but classy and sophisticated when parked outside a restaurant on a date.

It’s one very good all-rounder, the CX-5, and with the power to back up its great chassis, it really does stand out as a serious contender against the European competition at this price point.