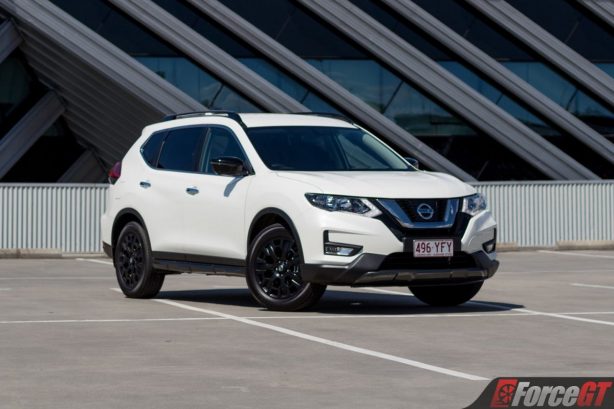 It was way back in 2001 when Nissan first launched the X-Trail, the car that single handedly added petrol to the growing flame of SUV domination. They got the recipe right from the get go, a practical family SUV with enough spice mixed in to handle some light off-roading. Roll on through the years and the X-Trail has been swamped by offerings from the competition making it have to fight even harder for a place in your garage. The keys to a brand new X-Trail N-Sport all-wheel drive were mine to see if the latest incarnation stays true to the virtues that made the original such a success. 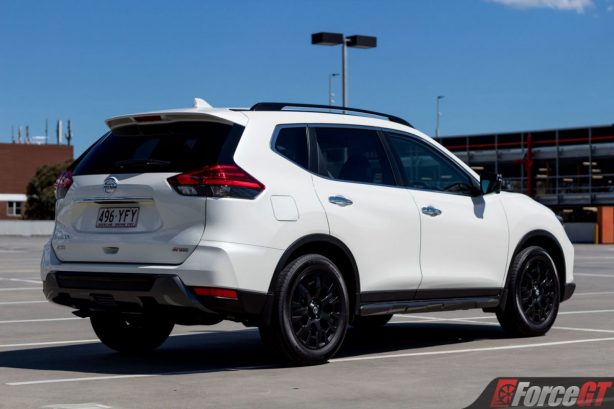 Where the original had all the curves of a shoebox, the current X-Trail sports a far more stylish design with a mix of angular highlights and subtle curves. With the aggressively angled LED driving lights leading the eyes to the dark chrome V-motion grille, the N-Sport’s mix of contrasting black elements against the Ivory pearl paint has it stand out against its more tame rivals. Unique to the N-Sport are the 18-inch black alloy wheels, black door mirrors and roof rails along with the gunmetal grey front and rear bumpers. 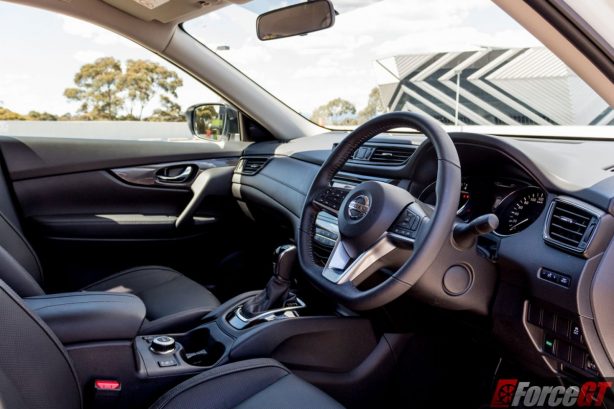 Black must be the colour of choice at Nissan HQ as the interior is loaded with it across the various trimmed elements. It’s not the brightest of places to loiter around in but what it lacks in personality it makes up for with comfort and build quality. Plush leather lines the door handles and centre console lid as well as a large portion of the sculpted dash. 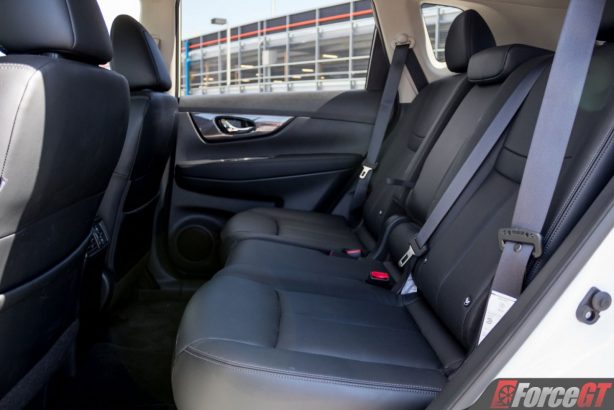 The rear seats easily accommodate two adults but a third has things overly snug. Two cup holders are positioned in the arm rest and the rear of the centre console features dual aircon vents. Tech laden passengers won’t be terribly happy about the lack of any rear charging ports as both USB and the standard 12V are both missing, though there is a 12V outlet located in the boot and those up front are spoiled for choice with two 12V outlets in the centre console as well as a USB port. 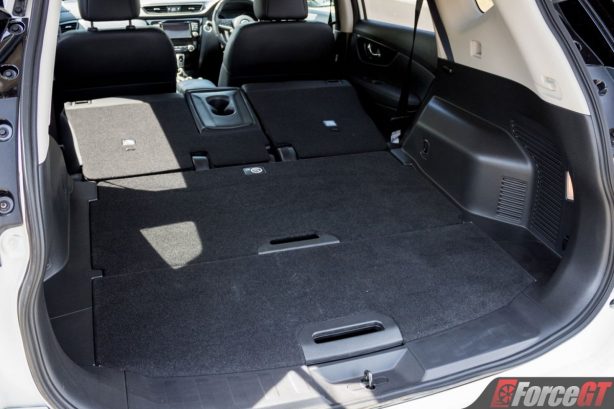 The boot offers up a hefty 565L of storage space with the rear seats up that opens up to a maximum of 945L once laid flat. The floor itself is nice and flat so you can slide heavy items in and out with ease, or if you prefer the rearmost floor panel can be removed and slotted in lower to give more cargo depth. It would have been great if the removable cargo cover could slot down there somewhere but like many cars, you’re forced to store it at home when it’s not in use. 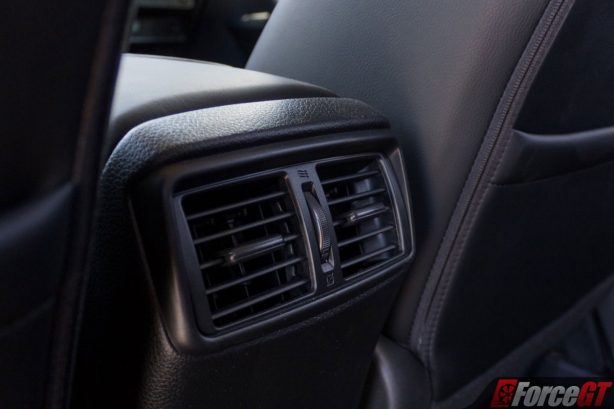 Visibility in the X-Trail is better than most of its rivals with only the slightly thicker A pillars and mirrors obscuring your vision. On the plus side you do get a brilliant top down view from the various cameras dotted around the car and lane changes are made easier with the inclusion of blind spot monitoring. Most units have a small light located in the mirror itself but Nissan have opted to place it on the inside of the mirror mount, making it easier to see from your peripheral vision.

Another neat trick the X-Trail has tucked up its sleeve are the ventilated and heated front cup holders to keep your drinks either chilled or warm.

Instead of an electric parking brake the X-Trail has to make do with a foot operated handbrake, the benefit being that you’ve got a more spacious centre console and it keeps costs down to boot. You’ll want to avoid placing your phone in the front storage pocket if it’s not in a grippy case as the base is textured plastic that’ll struggle to hold your phone in place. 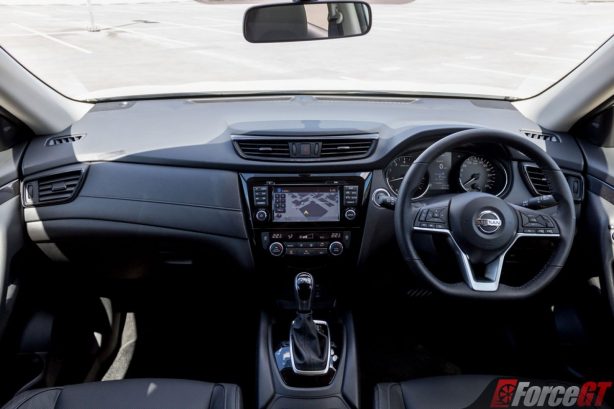 At the heart of the X-Trail lies a 2.5-Litre 4-cylinder engine producing 126kW @ 6,000 rpm and 226Nm of torque @ 4,400 rpm. The donk’s no powerhouse and it could use some extra grunt but it does the job well enough to get the 1,549kg slab of Nissan up and moving. You’ll hear it working away too, the X-Trail lets in wind, road and engine noise needing more sound insulation to keep things more civilised.

Putting the power to all 4 wheels falls to the Xtronic CVT which can work with the Eco mode to provide improved fuel economy. Nissan states that you can score a combined 8.3L/100km fuel economy rating which isn’t far from the 9L/100km that we scored after our week long test, not an amazing result for sure but not horrible either. 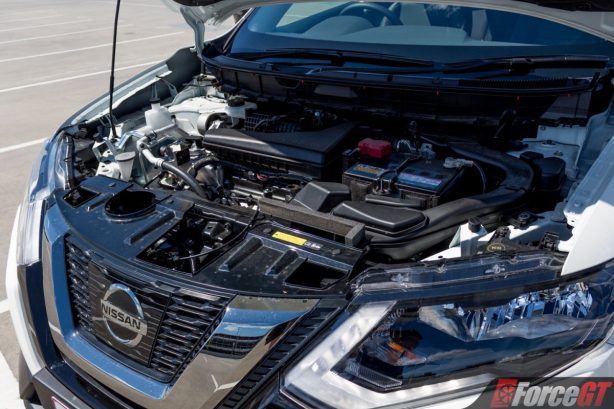 The X-Trail N-Sport features an all-wheel drive system that’s a bit like the ATTESA system found in Nissan’s original AWD Skyline GT-R’s, only in the X-Trail it’s backwards. Instead of prioritising traction to the rear wheels for maximum performance, the AWD system focuses on giving the front wheels all the traction only shifting some of that power rearward when things get slippery. The end result is traction when you need it and a predictable more fuel efficient powertrain when you don’t. 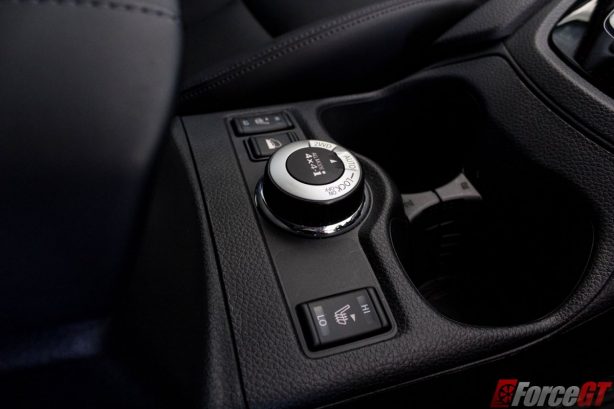 There’s definitely more of a emphasis on off-road capability when it comes to the handling in the X-Trail. The ride is softer than you’d expect and there’s more body roll as well. Where other SUV’s will have you rattling your bones into a fine dust, the X-Trail will smooth out poor terrain far better than its soft-roader rivals. 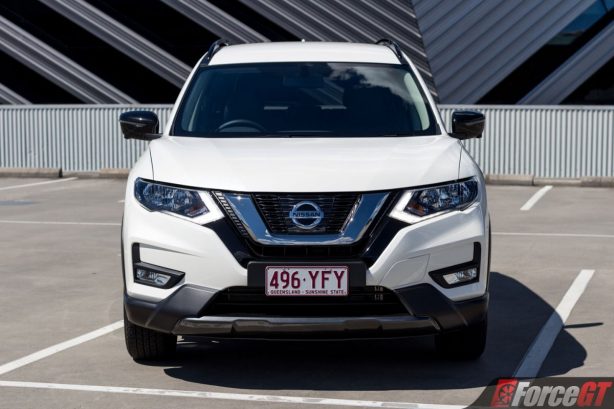 The X-Trail N-Sport is based on the mid spec ST-L model with the top of the range Ti scoring all the best toys. That said you do still get a reasonably varied feature list comprising of:

While the stereo is DAB+ equipped the quality of the audio from the 6-speaker unit is average and it also suffers from a bit of button overload as the 7-inch display is surrounded by an army of them. On the plus side it is satellite navigation equipped and you’ll have no problems connecting up your phone to blast your own audio playlist.

Active cruise control is pretty much a standard feature on most new car but Nissan haven’t caught up to the rest of the pack as the X-Trail misses out on speed limited cruise and only the higher spec models score active cruise control.

A 5-star ANCAP safety rating has been given to the X-Trail and there’s a few modern safety tech features that no doubt helped. The aforementioned blind spot monitoring is going to get the most use day to day but you also get low speed forward collision mitigation and warnings for those occasional lapses in concentration and rear cross traffic alert will help out when backing out in poor conditions. Most important is the inclusion of curtain airbags so all occupants are well protected in the worst case scenario. 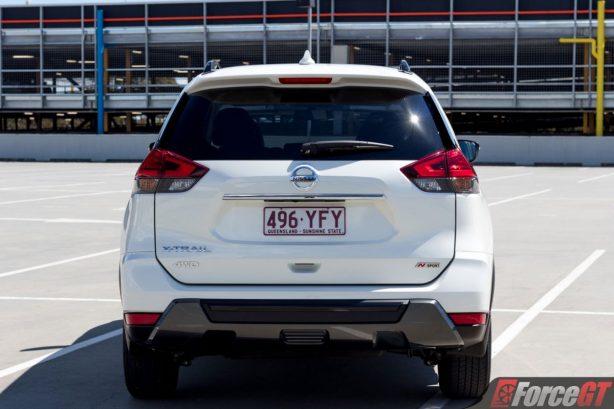 Everything that made the original X-Trail such a versatile and viable SUV has carried on through the years into its stylish and much more well equipped great great grand child. Built well and priced to compete, the X-Trail could be your ideal AWD 5-seater SUV of choice.