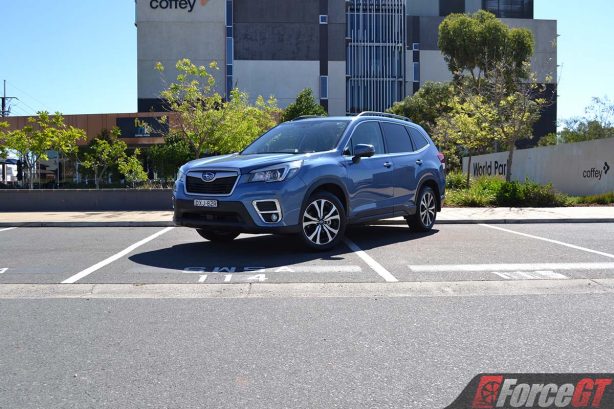 If you are struggling to distinguish the 5th-generation Subaru Forester from its 4th-generation predecessor, that’s OK because this is the best Forester thus far from Subaru.

Like the Impreza on which it is based, Subaru has spent the development money wisely, making big improvements where it counts. The new Forester is safer, has more technology, drives better and has a hugely improved interior.

And while the Forester 2.5i we sampled earlier this year is relatively well equipped for a base model, we are stepping up into the one-down-from-the-top 2.5i Premium for this review to check out the new technology and gadgets that come with the extra $5,000 spend.

What extra features do I get? 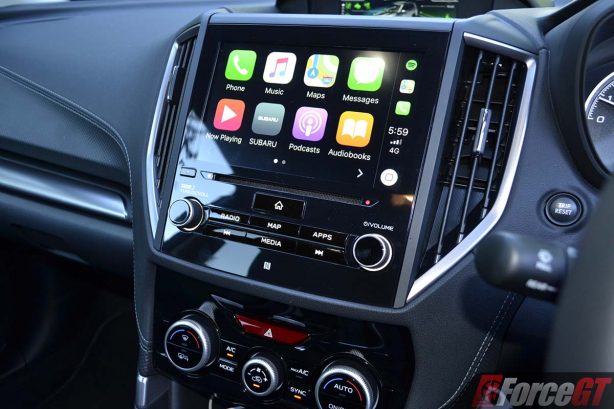 Being a ‘Premium’ model, the 2.5i Premium naturally comes with most of the creature comfort you would expect from a top end variant, including larger 18-inch alloy wheels, 8-way electric driver’s seat with memory, power tailgate, power folding mirrors with passenger side auto dipping and even electrically folding rear seats.

That is on top of what is now accepted as ‘bare-bone’ features such as power windows and mirrors, Bluetooth connectivity and audio streaming, Apple CarPlay and Android Auto, climate control air-conditioning and an 8-inch touchscreen infotainment system (up from 6.5-inch) with built-in Tom Tom sat nav.

But what impresses most is Subaru’s Driver Monitoring System, which uses an infrared LED and camera mounted directly ahead above the small LCD screen that displays climate control temperature, clock, etc. to scan the driver’s face. 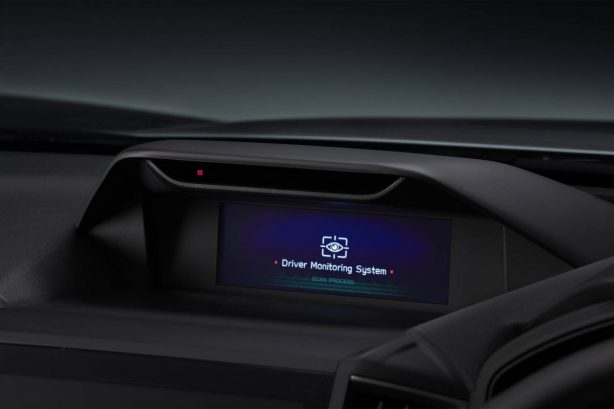 It is similar to the face recognition tech used in the latest iPhones and once registered, the car will ‘recognise’ and greets the driver by name when entering the vehicle. It will then diligently adjust the seats, mirrors and restore the last used air-con settings and radio station for the respective driver automatically.

The system can register up to 5 individuals in just a few simple steps via the steering wheel button and is especially useful if there is more than one driver that uses the car, as there is no need to readjust everything every time you swap drivers.

It is amazingly convenient and should be adopted by all manufacturers! However, like most things in life, there is a big BUT.

And while its handy and clever, it’s not all friendly and nice all the time, as the system also acts as a monitoring system. It will therefore, beep furiously if you are paying 100% attention, such as looking away from the road ahead for more than a couple of seconds unless you are indicating to change direction. Not only that, it will also track your eyes and sound a warning if it detects drowsiness or averted gaze. 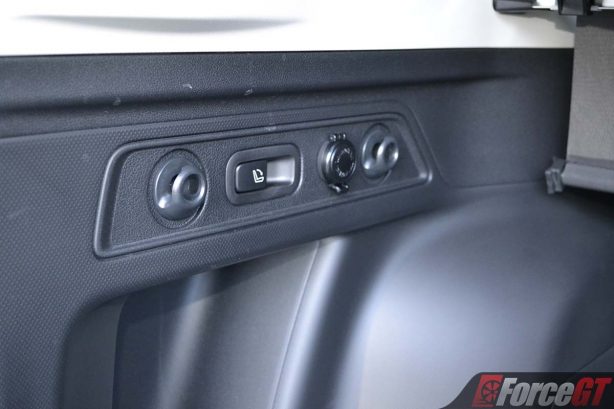 Drivers are further reassured with the inclusion of the Rear Cross Traffic Alert which uses radars in the rear bumper to monitor your blind spot when reversing. If it detects a vehicle approaching from the left for example, it will sound a warning as well as flash the blind spot monitoring icon in the left hand side rear view mirror to warn the driver.

Another welcome feature is the boot-mounted electric rear backrest that saves you the hassle of walking around the car to release the backrests. 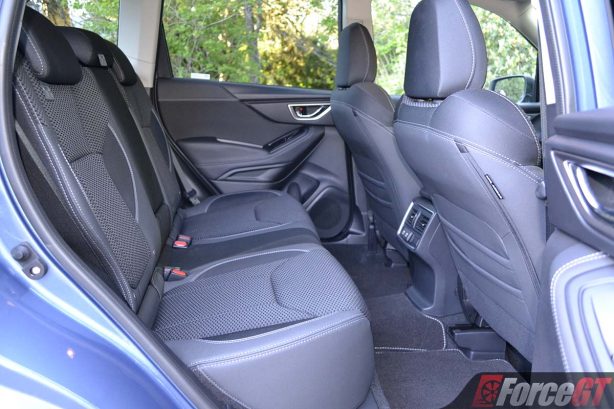 All these make the new Forester an incredibly easy and practical car to live with. The interior is spacious and well-laid out, with plenty room for both humans and their belongings.

The partial leather (man-made) and cloth trim that cover the seats and door cards are nice to look at as well as family and pet friendly.

As is typical of Subaru, fit and finish is top notch. Most plastics are now padded for a gentler feel, while the large infotainment screen is crisp and responsive, providing a perfect platform for the excellent Tom Tom sat-nav. 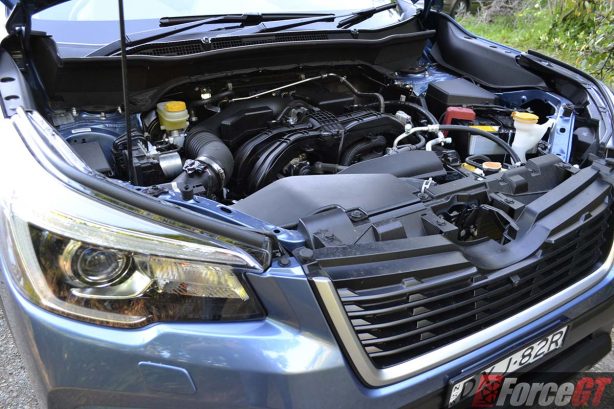 Like the rest of the new Forester range, the 2.5i Premium is powered by a 2.5-litre naturally aspirated flat four with direct injection. It delivers 136kW of power and 239Nm of torque directed at all four wheels via a CVT and Subaru’s Symmetrical All-Wheel Drive system.

Like most CVTs, there is slight hesitation at low speed but once on the move, is generally smooth. Engine and road noise are well suppressed to provide an appreciably quiet ride. 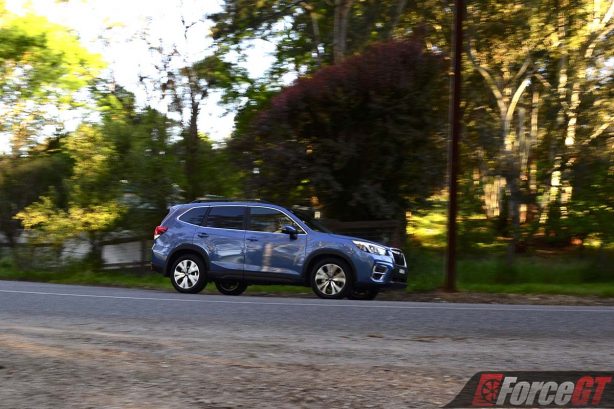 The new Forester sits on Subaru’s new scalable platform that made its debut in the Impreza hatch featuring double-wishbone rear suspension. With a relatively low centre of gravity, thanks to its horizontally-opposed engine, the Forester feels very much car-like to drive and handles admirably for a tall mid-size SUV.

Its steering is surprisingly quick and body roll is well contained through bends. And despite rolling on 18-inch wheels, ride compliance around town is good with the suspension attentively smoothing out most road irregularities.

It’s respectably economical, too, slurping 9.9L/100km – 0.6L/100km more than the base model Forester we tested a few months ago. Admittedly, 80 per cent of the test was done in an urban setting. With more freeway sprints, we should see this drop slightly.

While the new Forester may look barely changed from the outside, its high tech features and new platform makes this the best Forester thus far.

Is the extra $5,000 over the base 2.5i worth it? Depends how much you like your technologies and gadgets, but for a tech head like me, it’s absolutely worth it. We would love to see the Driver Monitoring System not only come to all future Subaru’s but also all other manufacturers.