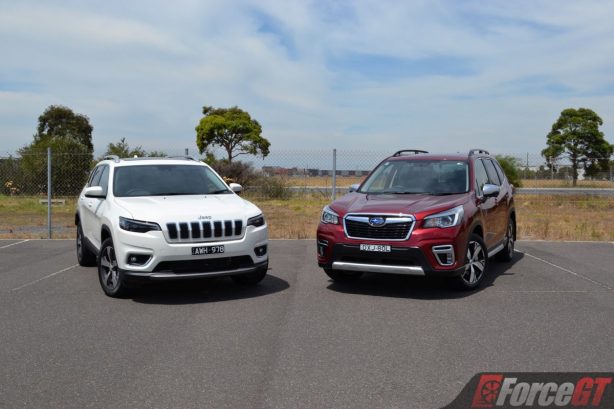 The mid-size SUV class is the most competitive and crowded car segment today. With no fewer than 20 players at the time of writing, buyers are literally spoilt for choice. But if you are looking for something that can tread beyond the paved roads of our concrete jungle, your short list might quickly shrink to just two models: the Subaru Forester and Jeep Cherokee.

Since inception, both these models promise car-like comfort and maneuverability with the added ruggedness and versatility of a 4×4. They are loved by families and adventurers alike. The formula have carried through the generations pretty much intact and today the 2019 Forester and 2019 Cherokee – both in their fifth generation – are still the less ‘soft’ options of the soft-roader crop.

We were given the keys to the top-spec variant of both models – the Forester 2.5i-S and Cherokee Limited. So, let’s put them on a collision course to see which we like more. 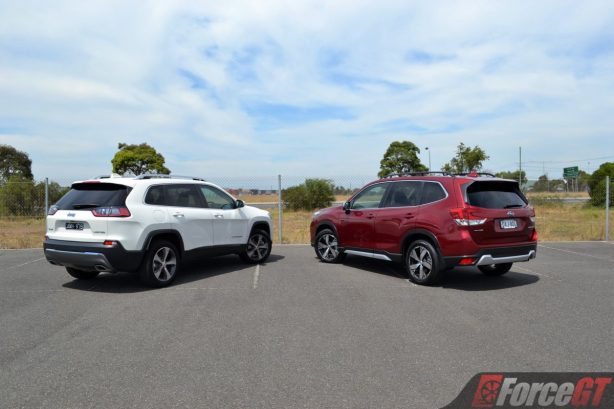 Priced at $41,490, the Forester 2.5i-S not only costs nearly $6,000 less than the Cherokee Limited, but also undercuts most rivals in range-topping form. Despite that, it comes packed with all the bells and whistles that would satisfy even the most demanding of families and campers. The long list of standard features includes Subaru’s renowned permanent all-wheel drive, LED headlights, taillights and fog lights, keyless entry, powered tail gate and an 8-inch infotainment display with satellite navigation, digital radio, Apple CarPlay and Android Auto. Harman Kardon premium audio makes a presence, with a total of 8 speakers and a sub-woofer available to play your favourite tunes.

Creature comforts usually found in luxury cars such as 8-way power adjusted front seats, electric folding rear seats and electric sunroof have also made it to the top-spec Forester. 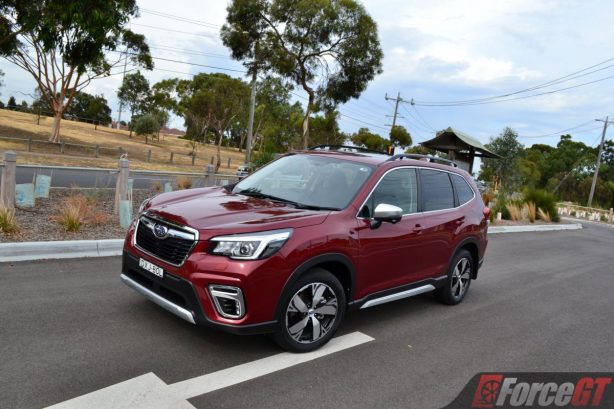 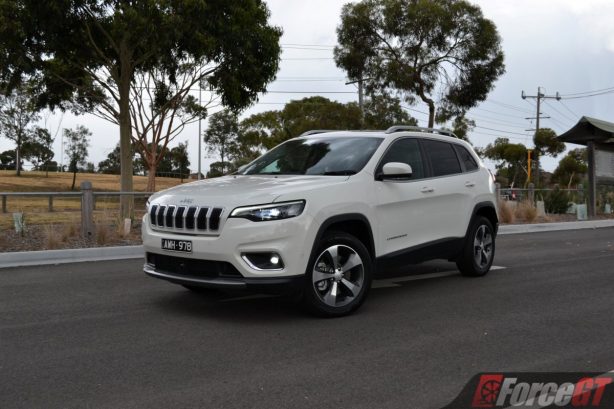 The Jeep Cherokee Limited comes in at $46,950 and like the Subaru is pretty comprehensively equipped. It matches the Japanese SUV in audio and connectivity which includes a punchy 8-speaker plus subwoofer Alpine system.

Comfort features are also similarly spec’ed, though the Jeep misses out on a standard sunroof (a dual-pane panoramic sunroof is optional) and electric folding rear seats. It does, however, best the Subaru with heating and ventilation for the front seats.

Safety in the Cherokee mimics that of the Forester and while it lacks any driver fatigue detection system it’s made up for with a surround view camera.

The Forester’s two-box design has been passed down untouched through the generations and it’s just as apparent in the latest model. It isn’t the best or trendiest design but it isn’t in any way offensive either. The honest styling places preference instead on practicality and functionality, with the large square windows offering passengers unobstructed view of the outside world and large door apertures allowing easy ingress and egress.

The 2.5i-S rolls on 18-inch wheels and features silver inserts on the roof rails and side cladding, along with silver housing for the side mirrors. 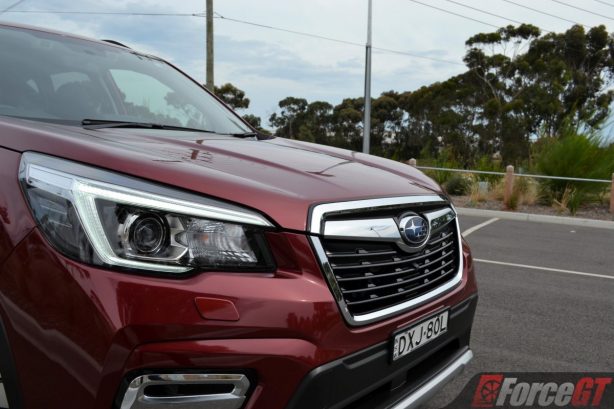 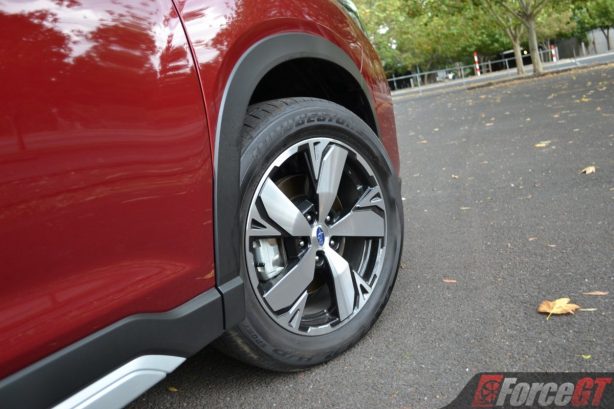 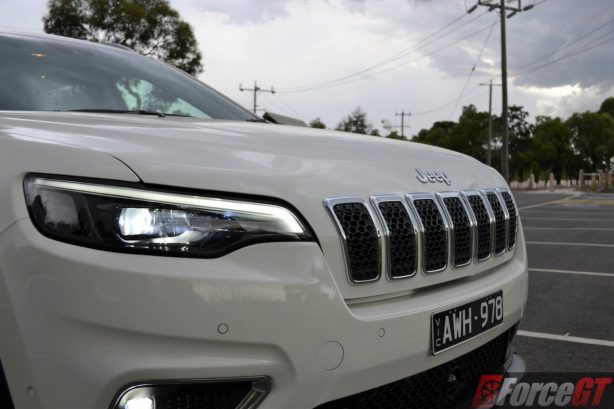 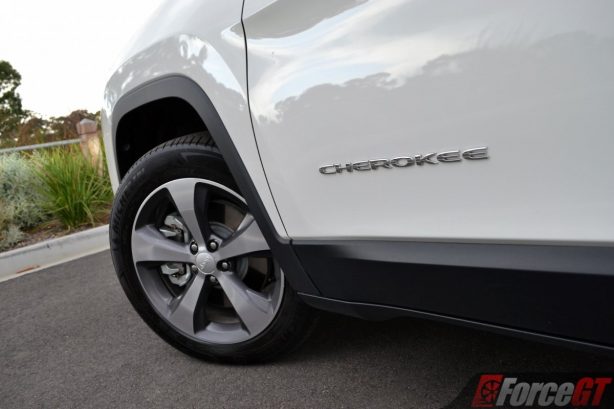 Sleeker and lower than the Forester, the Cherokee may be easier on the eye for some, though the smaller rear door opening can be cumbersome for families with little ones still relying on child seats.

Like the Subaru, the Jeep rolls on 18-inch wheels and sports chrome garnishes on various spots of the exterior including the front and rear bumpers. 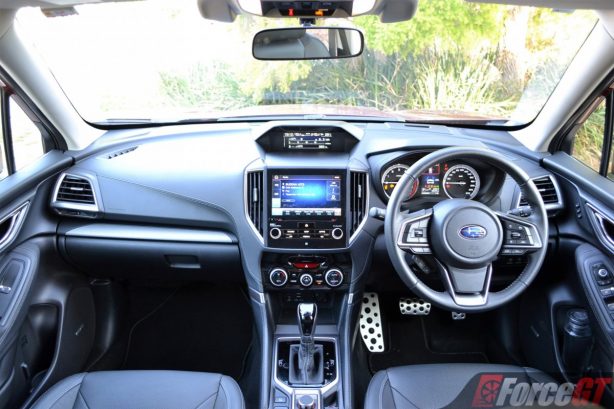 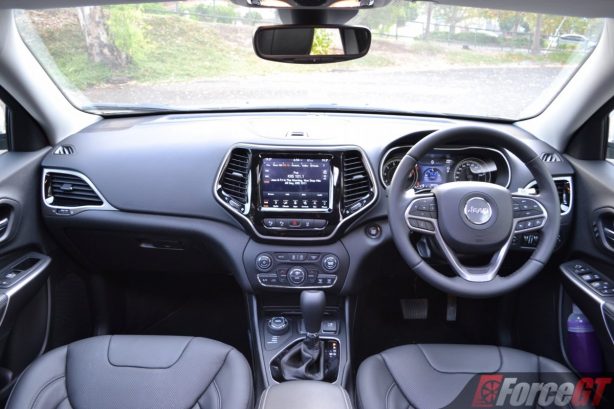 Subaru’s focused on practicality continues on the inside, with the Forester sporting a well laid out dashboard and superb ergonomics. Everything is within easy reach and located where it should be.

The Cherokee’s dashboard is slightly more cluttered in comparison but the larger 8.4-inch center touchscreen nestled within triumphs the Forester’s 8-inch item in user-friendliness and response time.

Cabin space has always been a Forester hallmark and the new model is the roomiest ever. Not surprising, the Forester is more spacious in all dimensions – head, leg, shoulder and knee room – than the Cherokee, partly owing to its upright boxy design. 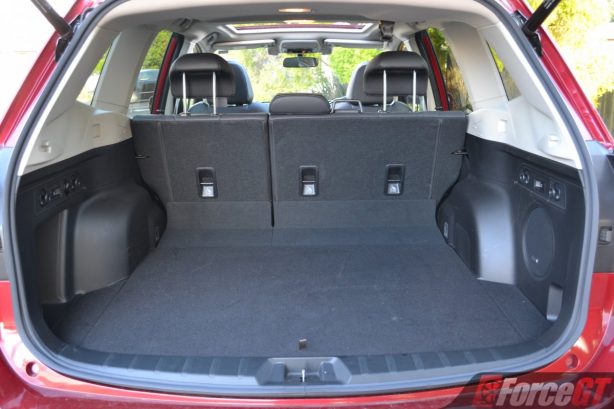 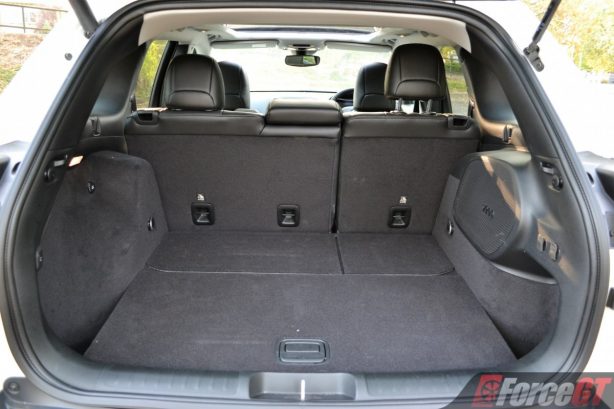 Storage space such as the door pockets, glove box and center compartment are also larger in the Subaru, so is cargo capacity. With the rear seats up, the Forester has 498 litres of boot space, expanding to a capacious 1768 litres with them tumbled. The Cherokee’s boot space is larger with all seats up but completely dwarfed with them folded, with the figures coming in respectively at 570 and 1267 litres.

While the Cherokee’s choice of cabin materials are better in areas such as the door trim and seat upholstery, the Forester generally feels more solidly put together, with faultless panel alignment and devoid of rattle. 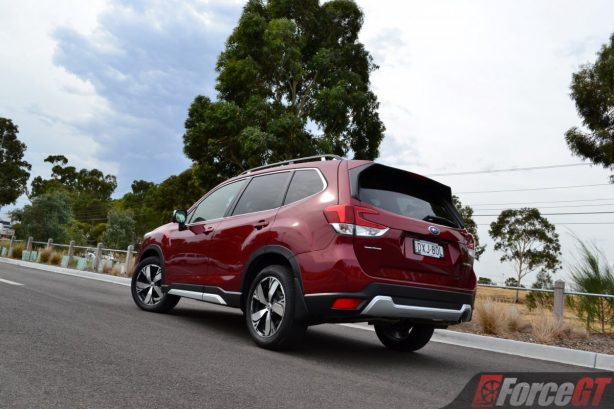 For the first time in the Forester’s history a forced induction power plant is no longer offered. Inherently, this means the turbo-diesel drivetrain first introduced in 2009 is also axed.

With this, the range is only available with a reworked 2.5-litre normally aspirated flat-four with direct injection which directs 136kW/239Nm to all four wheels through a CVT automatic.

Around town, the 2.5L/CVT combo is generally smooth, with enough pull to get the mid-size SUV up to speed relatively quickly. Engine and road noise are also well suppressed to provide an appreciably quiet ride. Prod it though and it’s a different story as the engine becomes coarse and vocal in the top end.

At 8.6L/100km, real world fuel economy is respectable but not class-leading. This is against the rated average of 7.4L/100km. 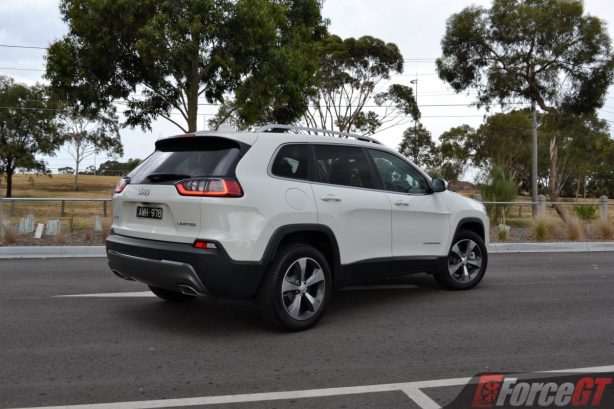 The Jeep’s 3.2-litre V6 petrol engine outguns its rival with 200kW and 315Nm. It must be praised for its smooth power delivery and impressive refinement across the entire rev range. It’s a versatile unit that sinks into a relax demeanour when cruising but mesh the paddle and it comes alive, even sounding satisfyingly inspiring at the top end.

The nine-speed auto works well with the V6 to deliver effortless acceleration. The top three ratios are overdrive gears, which, in theory, are designed to keep fuel efficiency in check at freeway speeds.

But with a tested average of 9.8L/100km (which coincidentally matches its rated figure), the Jeep isn’t the most efficient and is expected of a big displacement V6.

The new Forester sits on Subaru’s new scalable platform that also underpins the Impreza hatch featuring double-wishbone rear suspension. With a relatively low centre of gravity, thanks to its horizontally-opposed engine, the Forester feels very much car-like to drive and handles admirably for a tall mid-size SUV.

Its steering is surprisingly quick and body roll is well contained through bends. And despite rolling on 18-inch wheels, ride compliance around town is good with the suspension attentively smoothing out most road irregularities. 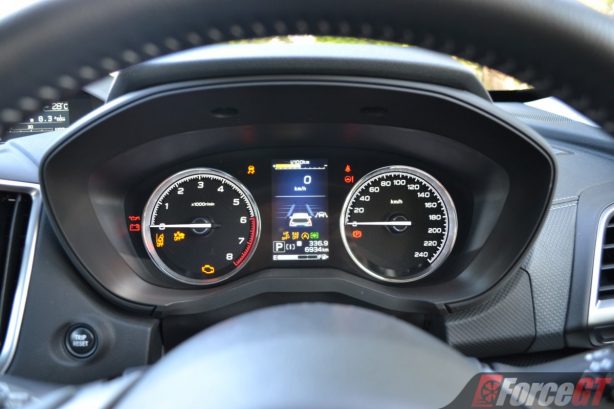 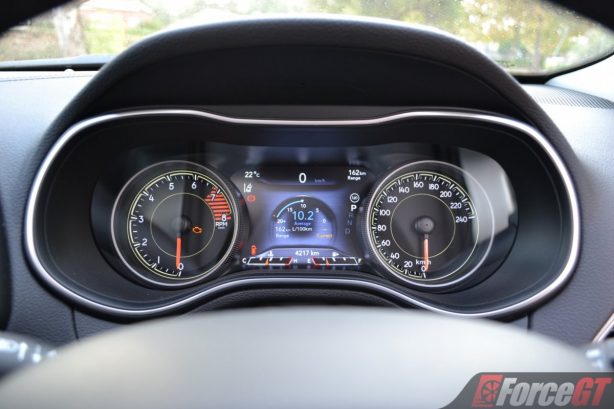 Like the Forester, the Cherokee strikes an almost perfect balance between comfort and handling, with it rounding off bumps and ruts nicely while leaving just the right amount of firmness for a sporty feel. Around the bends, it feels tautly composed for a SUV, though its steering isn’t as sharp and communicative as that of the Subaru.

With all-wheel drive, both cars impress with excellent grip on and off road. With selectable drive modes and terrain management system, both cars make gravel tracks feel like a walk in the park.

With most medium SUVs these days being nothing more than urban trawlers, it’s welcoming to see models like the Subaru Forester and Jeep Cherokee still staying true to their roots by preserving their go-anywhere capability.

As far as adventure vehicles go, these two are faultless. But while both cars also make great family crossovers capable of tackling the daily urban grind, they are quite distinctive in several ways.

The Subaru is more spacious, more economical and has better safety features. And with a significant price advantage, the Forester represents excellent value, too.

Meanwhile, the Cherokee is more refined, more powerful and feels slightly more premium on the inside.

But we are looking for the better family SUV and in this regard the Forester is the more complete, all-rounded package.