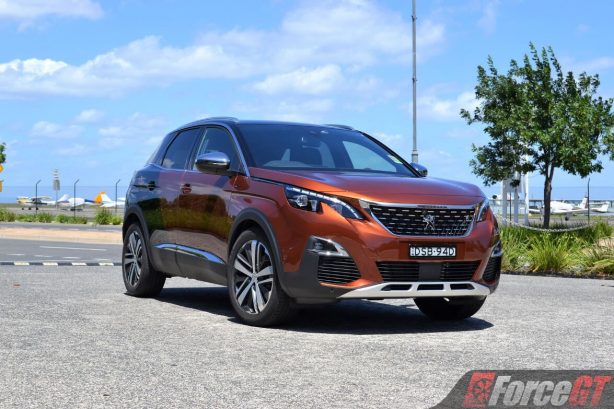 Think of the senses melting Crème brûlée. Now add a chilled tangy whiff of The Mimosa. That’s the ‘feel good’ feeling you get when driving the new Peugeot 3008. It’s France’s boldest mark yet on the mid-size SUV segment. One that is as significant as those classic French dessert and cocktail.

After years of slapping the lion logo on forgettable people mover and recycling ordinary Mitsubishi SUVs, Peugeot is finally on revival with a new range of admirable products starting with the cracking 208, followed by the equally resolved 308. The baton is now passed on to the 3008 – Peugeot’s most important model – to restore the brand to its glory days.

It’s no easy task with the SUV segment saturated with no fewer than 20 players. It has never been so crowded. But unlike Peugeots of the past, this new 3008 is sure to stand out from the rest of the pack for the right reasons this time around. 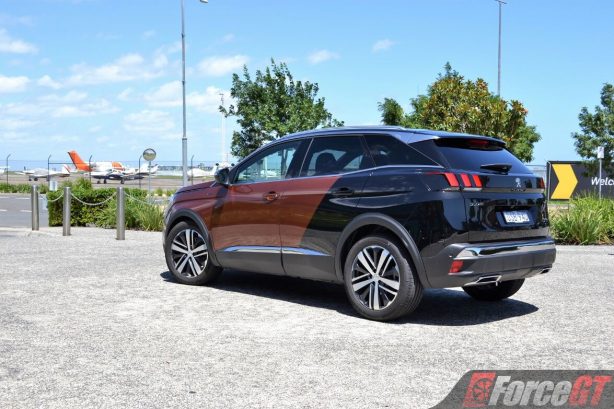 Peugeot makes no secret that its latest SUV is aimed at the pointy end of the segment and its pricing structure reflects that. It competes with tupper grade models from key rivals such as the Mazda CX-5, Honda CR-V and Volkswagen Tiguan. But unlike the competition, the 3008 line-up is strictly front-wheel drive only, which can be a deal breaker for some.

In what must be the biggest automotive transformations in recent times, the 3008 has gone from an upright, boxy MPV to a stylish, sporty crossover. There’s no doubt the new 3008 is the sharpest looking SUV in its class. Peugeot has finally hit the mark with this one with a flowing design that combines a purposeful front fascia and an angular rear with creases and lines all in the right places. Its proportion is spot on and what seems like excessive chrome garnish actually works a treat, adding sparkle to a design that looks every bit as expensive and upmarket as SUVs costing twice its price.

And with our test car draped in the optional two-tone colour scheme (Coupe Franche in Peugeot speak), one thing we cannot not do in the new 3008 is make heads turn everywhere we go. 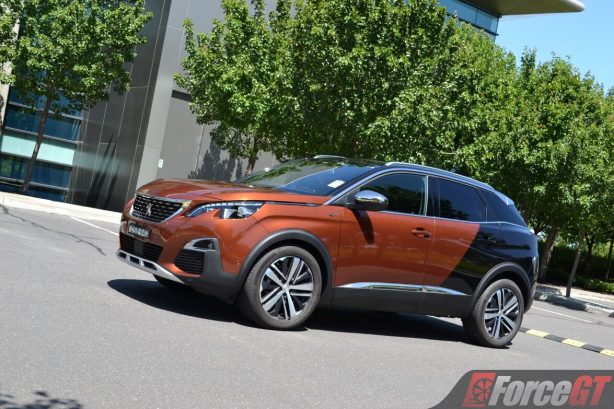 If the exterior is great, then the interior is just superb. The dashboard is a masterpiece, futuristic and modern in its design, yet functional and ergonomic in its layout. Centered at the space age-like cockpit is a 12.3-inch LCD digital instrumentation that serves up all driving information including a map in navigation mode in ultra high resolution and crisp graphics. It looks fantastic and is easy enough to use if not a little washed out under direct sunlight.

Like the rest of its offering, Peugeot has stuck with a small steering wheel with the 3008 that is flat not just at the bottom but also at the top. The reason being you don’t see the instruments through the wheel but above it. Some drivers might still struggle to get used to it but for us it’s never been an issue. 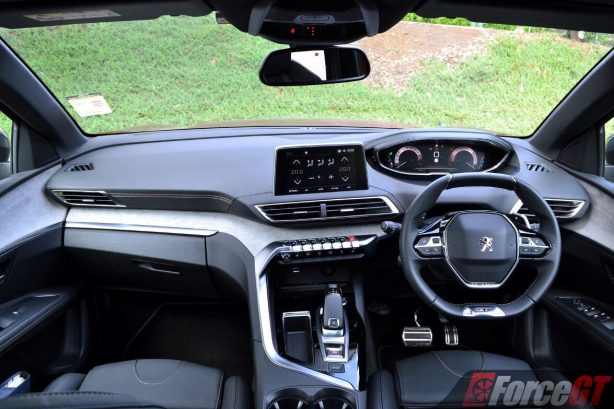 The cabin feels exceptionally high quality and properly premium thanks to top shelve materials used throughout. Soft touch surfaces adorn not just the upper part of the dashboard but also the lower trims, and boy do those the piano key shaped buttons in center console look amazing. There’s also no shortage of aluminium inserts and highlights to lift cabin ambience. And did we mention interior mood lighting for a sub-$40k car?

The front pews are very comfortable if not lacking a little side support in the Nappa leather-quilted seats of the range-topping GT model. Passenger space up front is good and while rear legroom is one of the most generous in class the rear bench’s lack of width means three adults can get overly intimate in the back. Beware also when ticking the panoramic roof option as it does take away some precious headroom.

It’s a bit of a hit and miss when it comes to storage and convenience. The door pockets are usefully thick and deep (which also come nicely padded in the GT) and the center console storage compartment is so massive it can swallow a 2L bottle, but the glove box is painfully tiny and there’s only 1 USB port in the entire cabin when rivals are offering at least 4.

With 520 litres of cargo space (1580 litres with the seats folded), the 3008’s boot isn’t the biggest but still sizable and relatively flat.

Powering the Active, Allure and GT Line is a 1.6-litre turbocharged petrol rated at 121kW and 240Nm. The top-spec GT is exclusively offered with the more powerful 2.0-litre turbo diesel producing 133 kW and 400Nm. Both powertrains are fitted with six-speed automatic transmission. 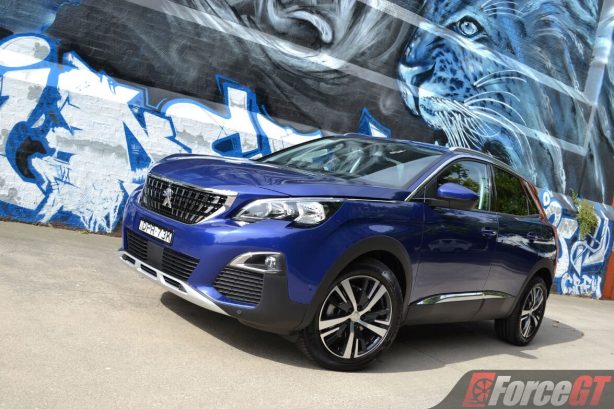 The petrol unit is great choice if you don’t require the stronger torque for towing or long distance fuel economy advantage. Its refinement and quietness, even at high revs, triumphs many mainstream rivals and even borders on luxury levels.

While its claimed o-100km/h sprint time of 9.9 seconds isn’t all that impressive in today’s standard, the hardy turbo petrol loves a rev or two and with peak torque on tap from just 1400 rpm there’s never a time you’d be starving for power. 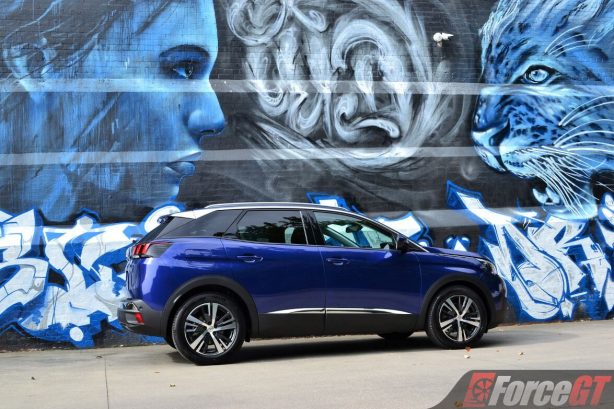 Significantly more torque, the diesel shaves a second off the petrol’s 0-100km/h time, stopping the clock at 8.9 seconds. Turbo lag from a standing start is more evident in the diesel than in the petrol, but once on the go the diesel pulls much harder. It’s a noisier and less refined engine, though.

The six-speed torque converter auto was smooth in most proceedings though in the diesel we drove it felt like it slipped in revs going from first to second gear, giving an odd CVT-like “rubber band” sensation for the first couple of gears. That being said, it’s not something that you’d notice under normal driving unless you’re paying attention to it.

The 3008 is one of a very few in class that still uses a lower cost torsion beam rear suspension setup. Matched with MacPherson Struts up front, the Peugeot’s ride quality is firmer than desired at suburban pace, lacking the kind of suppleness you’d come to expect from a family SUV on rougher roads. It’s not uncomfortable though, and once speeds approaches three digit, the ride smoothes out. 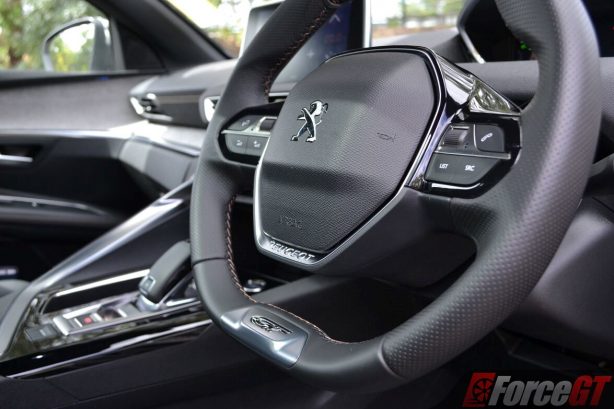 Where the firmer setup benefits is around the bends. There’s excellent body control with tidy handling that feels more like a compact, agile hatchback than a clumsy, high-riding SUV. Beware, however, that being front-wheel drive, the front tyres can occasionally struggle for traction in the wet under a heavy right foot. Tyres with better grip should help.

The steering wheel gives good feedback once lock is wound but is overly assisted, which is only amplified by its small size. It’s not so noticeable in town, but around a sweeping bend there’s often a need to correct your line.

There’s an air of perceived quality in the 3008 that is not matched by any rivals in the segment and we’d even say some cabin materials are even better than those found in a Volkswagen or Mazda. There’s an abundance of rich, soft touch materials punctuated by lashings of brushed aluminium around the air-vents, instrument binnacle, door grabs and transmission tunnel. The leather stitching is delicate, so is the ‘Brumeo’ fabric (Alcantara on GT) finish on the dashboard, front and rear door panel.

Importantly, the 3008’s doors shut with gusto – usually a measure of a car’s solidity to you and me. On test, the car feels impressively sturdy, with no annoying creaks or rattles coming from the cabin of both test cars. 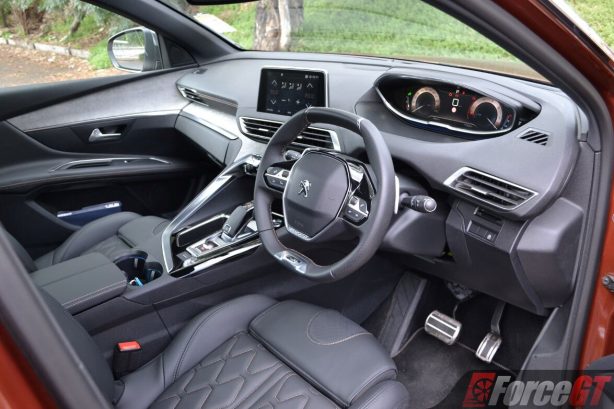 Yet, there is still room for improvement. In the GT model we tested, the glove box was out of alignment and the fuse box within it was loose. Elsewhere, the engine starter button oddly requires a longer press to action on both our test car. And lastly, the surround view (360 degree bird eye’s view) camera has a black square patch around the car every time on start up.

These gremlins aside, the 3008 is a truly impressive piece of kit inside and out. 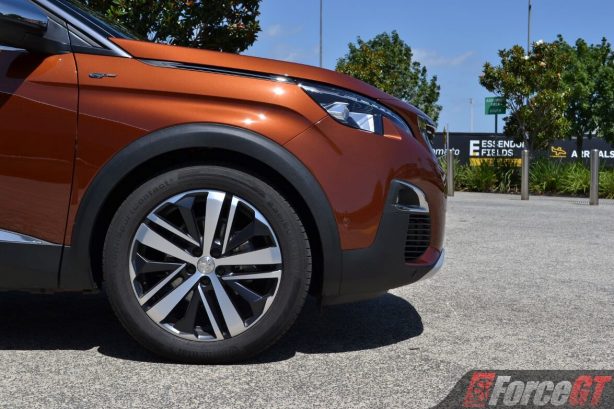 The more powerful yet thriftier 2.0-litre turbo diesel in the GT consumed a combined average of 5.9L/100km, again with mostly city driving with a couple of constant speed freeway trips thrown in. It’s one of the most economical diesel engines we have come across, especially on the freeway where it hovers around 4L/100km. With less use of air conditioning and more freeway time, we have little doubt that we’d be able to achieve Peugeot’s claimed average of 4.8L/100km.

Hands-free entry, push-button start and 360° vision reversing and front cameras are standard on all models bar the entry-level Active. 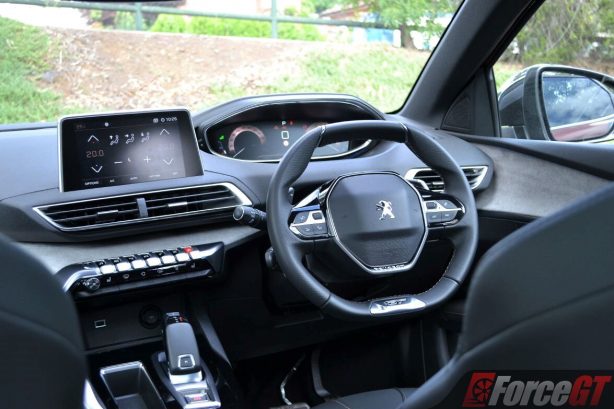 Among the slew of generic and mainstream mid-size crossovers available today, the new Peugeot 3008 calls attention to its bold design and luxurious interior. It’s a fantastic SUV to look at and sit in. If you’re style conscious, look no further. If you’re not, there’s still plenty the 3008 has brought to the table. It’s practical, well equipped and economical.

This winner of European Car of The Year is a class act, then? If only Peugeot offers an all-wheel drive option, up its build quality and ditch the cost-saving torsion beam rear suspension with a multi-link setup.