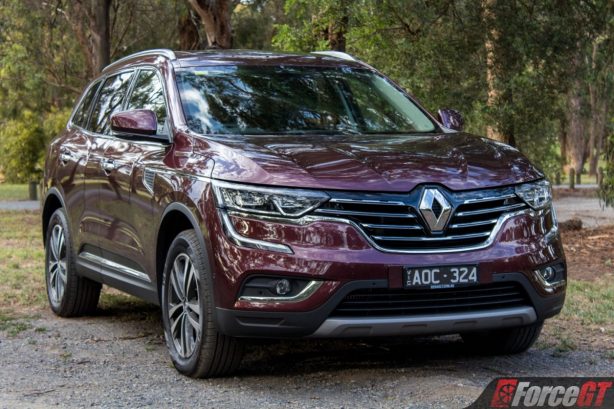 There’s massive competition for the 5-seater SUV family car space and Renault has jumped right into the pit to stake their claim with the Koleos. It ticks all the right boxes: high driving position, good ground clearance, 2WD and 4WD models, petrol or diesel and more safety features than a padded asylum cell. 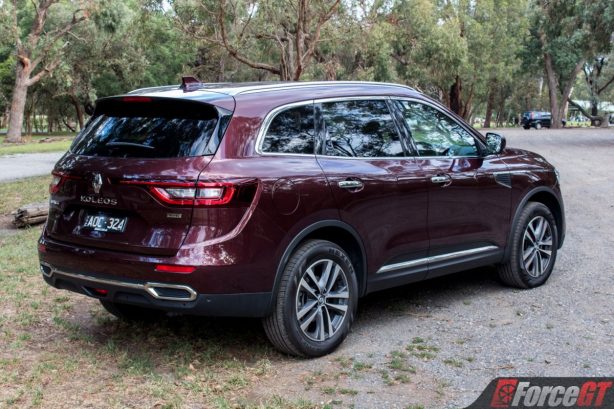 The Koleos could be the greatest family car to grace the Earth but if it doesn’t draw you in for a closer inspection on looks alone, then it’ll all be for naught and the masses will walk right past it. Thankfully the design team at Renault have done a brilliant job at sculpting a rugged and handsome looking SUV with sophisticated styling that’s contemporary enough to maintain its dignity as time rolls on. When finished in the optional metallic Meissen Blue, it’s quite the looker.

With that first hurdle negotiated you’ll be keen to see if the styling carries on through to the interior and once again, Renault delivered the goods. Modern, functional and well sorted, the inside of the Koleos is relaxing and comfortable environment to rack up the kilometres in. Our top spec Intens model comes finished in black double stitched leather, has a panoramic sunroof that the sun could practically fit through and the incredibly useful 8.7″ portrait touchscreen display located dead centre up front. 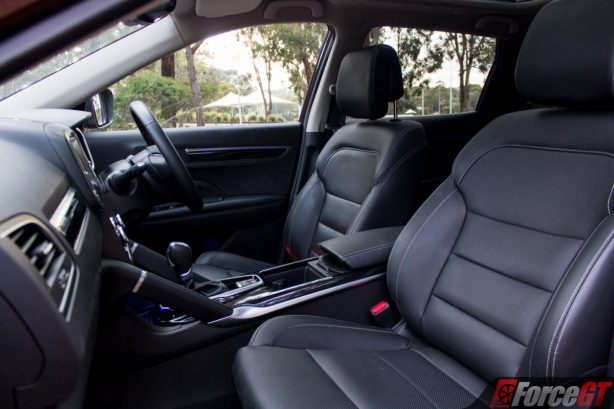 From the front row, driver and passenger both have their seats fitted with electronic adjustability and heating or venting should they desire. Passengers in the back have plenty of room to breathe and access to two USB charging ports as well as a traditional 12V socket along with dual air vents. Even though our Koleos was 4WD, the transmission tunnel doesn’t rob the rear passengers of too much leg space and you could quite easily pull off long trips with 3 in the back.

Surely with all the room up front the luggage capacity would be sacrificed but again, Renault surprises with an ample 458 litres that expands all the way up to 1,690 litres with the 60/40 seats dropped. Loading up and taking out bulky items won’t ruin your back thanks to the flat boot floor and scuff plates. Even with both your arms full, you’ll be able to open the electronic rear tail gate with a swipe of your foot under the rear bumper. Perfect for the Mums of the world that rarely have a free hand. 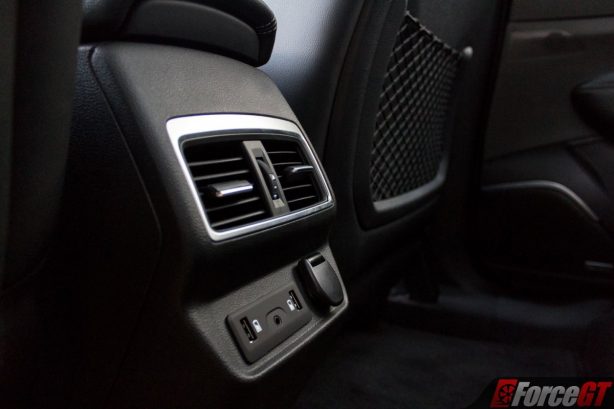 Given the build quality issues I’ve noticed in the Megane and the Clio, I took to the Koleos with a fine toothed comb to unearth similar problems and to my delight, I found none. Not one. It’s been put together incredibly well with excellent build quality found throughout the entire vehicle top to bottom.

The diesel is a natural fit for such a heavy car, tipping the scales at 1,743kg, the Koleos is no lightweight and needs a hefty slab of torque to get it up and going. That job falls to the 2.0-litre 4-cylinder turbocharged diesel unit to provide the grunt and with 380Nm of torque available from 2,000rpm, it does so with ease. Power clocks in at 130kW which is more than enough to get off the line in a hurry and pull off those risky divided line overtakes. And being a diesel, the Koleos also won’t rob you blind when the tank runs dry. The official fuel figure is rated at 6.1L/100km while I managed a flat 8L/100km, which isn’t too shabby considering I was mainly driving around town and not on freeways. 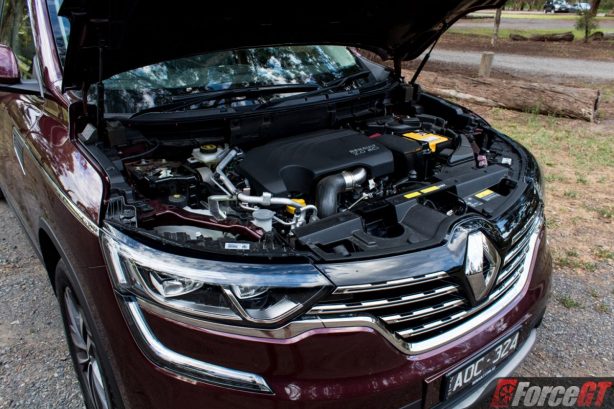 It’s smooth to drive too, the engine hasn’t got any of the harshness associated with the diesels of yesteryear and combined with the CVT gearbox, the Koleos works its way up to speed with the gearbox drawing no attention to itself. This is how all automatic gearboxes should be, toiling away in the background and never stepping a foot out of line so you almost forget they exist.

Over rough terrain and car park bumps, the Koleos is neither firm nor soft, it’s somewhere closer to the middle, evident by the body roll that makes itself known if you throw it into a corner at speed. Through the steering wheel, the feel is quite heavy but with plenty of feedback on the road conditions. It won’t tire you out but it’s definitely heavier than expected. Negotiating tight car parks requires some planning thanks to the large turning circle of the Koleos, though visibility out the front and sides are quite good. Only the rear was lacking in this department. 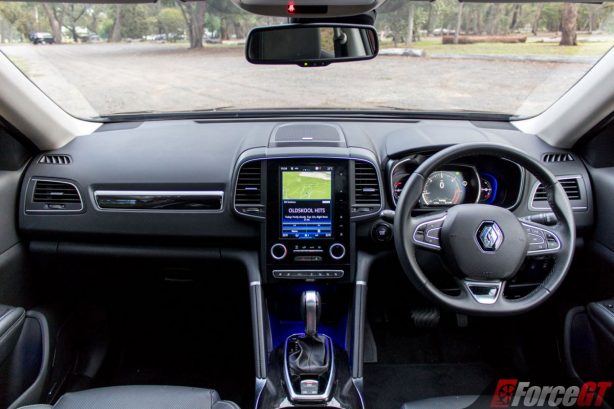 Given that our Koleos is the top spec Intens model, it’s not exactly sparse on features. The BOSE 12-speaker sound system with sub-woofer and amplifier pumps out the digital radio beats with crisp clear tones and sounds great no matter where you’re seated.

Visibility in the darkness of night is significantly improved, thanks to the Pure Vision LED headlights with automatic high beams. The automatic high beam system can be slack at times, refusing to flick back on after oncoming sources of light disappear. When it comes time to park you’ve got the full assortment of parking sensors – front, rear and side – to help you out.

Jumping from one lane to the next in busy city traffic is a walk in the park as the blind spot sensors take the guess work out of what’s surrounding you. The rear view camera, displayed through the 8.7″ display, is a requirement when backing out due to the high rear tailgate window. From the same screen the standard GPS satellite navigation system is used to guide you to your destination and thanks to the portrait layout you’ve got a much better use of screen’s real estate, enabling you to see further ahead than a landscape screen would allow. 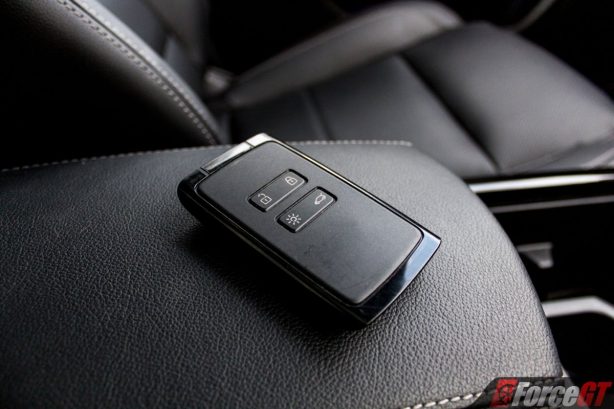 As a family car the Koleos needs to have all the big ticket safety boxes well and truly ticked, which is exactly what Renault has done. Around town the advanced emergency braking system should help avoid low speed collisions, along with the forward collision warning system. On longer drives, the lane departure warning system will keep you on your toes and between the lines. In the event of an actual collision there’s a whole army of airbags that’ll be there to protect those inside at a moment’s notice. Front row is taken care of by adaptive front air bags, lateral pelvis and chest level air bags, while both the front and rear get curtain airbags. All these active, passive and electronic safety features work in tandem with the structural design of the Koleos to give it a Euro NCAP 5-star safety rating for peace of mind should the worst happens.

There’s a lot of praise for the Koleos but there’s always room for improvement with a few issues rearing their heads throughout the test. First up, the cruise control system has the activation buttons located down near the gear stick on the centre console rather than the steering wheel like every other car.

To adjust the fan speed there’s no dedicated controls. You have to click through the digital controls every time you want to make a change which is one extra step that shouldn’t need to be done and requires taking eyes off the road.

The key is a giant plastic dongle that may work for you if you’ve got a hand bag but for those without, it’s a real hassle. When changing the radio station the system would forget what station I had selected and zero itself on a totally different spot which made browsing through stations a real chore. And finally, the handling wasn’t as fun and engaging as a Mazda CX-5 or Kia Sportage, making the Koleos all business and no play. 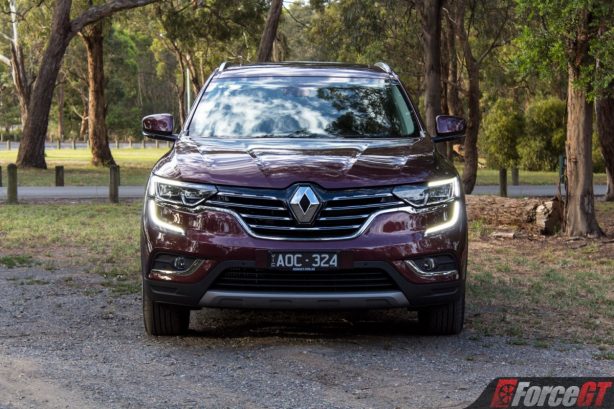 Our Score: 3.7/5
Priced at $47,490 for the top spec Koleos Intens Diesel 4WD, you do get a lot of car for your money. It gets even better when you factor in the 5-year unlimited kilometre warranty and 5-years of roadside assistance.

Buyers in this segment are completely spoilt for choice and the showing from Renault warrants a closer inspection as the Koleos is a well put together package for families after a feature packed SUV with some European flare. 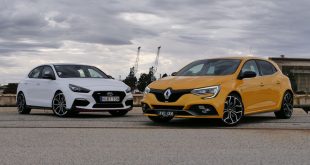