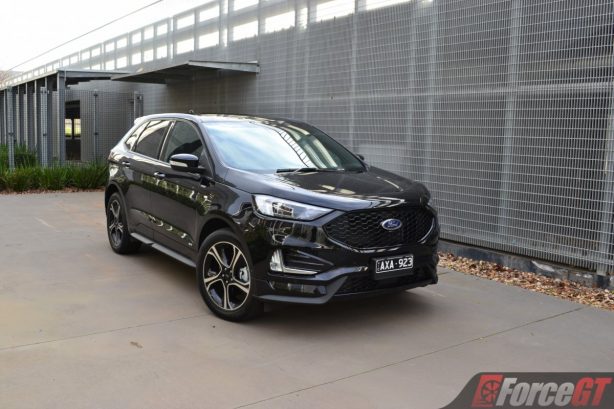 The Endura is Ford’s latest SUV brought in from the brand’s Canadian factory to replace the Australian built and developed Territory which was last sold in 2016.

Sharing the same platform as the Ford Mondeo mid-size sedan, the Endura is about the same size as the Territory, which places it in the large SUV class competing against the likes of Mazda CX-9, Hyundai Santa Fe and Toyota Kluger. But unlike rivals the Ford only offers five seats. It costs more, too, with price of the three-tier line-up ranging from $44,490 to $67,990 plus on-road costs.

Ford markets it as a premium SUV with focus on elite styling, upmarket cabin and the latest in technology. So, if you don’t need seven seats and fancy something a little more polished without breaking the bank, does the Endura fit the bill?

We spent a week with the mid-spec Endura ST-Line all-wheel drive automatic to find out. 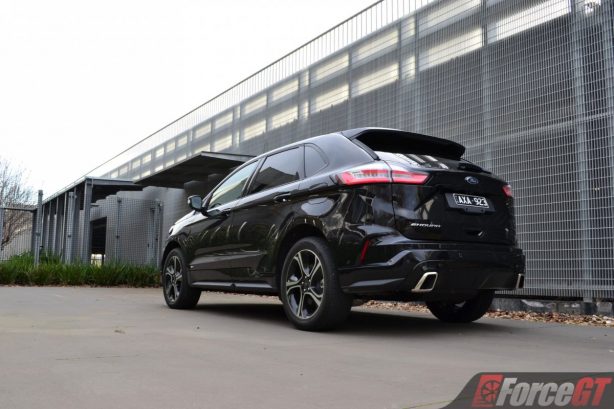 The Endura is a big SUV but it doesn’t look like it. With the lack of a third row, the rear overhang is short. This combines with large wheel arches and bold lines to give the SUV a distinctively sporty looks.

It looks tough and imposing, too, with that big trapezoidal grille up front and high-mount taillights which look like they have been lifted straight from the Mondeo. 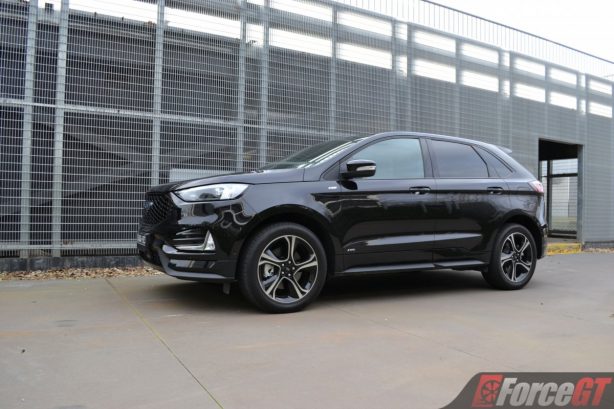 Our ST-Line variant brings added sporty touches through gloss black application for the grille surround, door frame, roof rails and beltline. A sports bodykit consisting of beefed up front and rear bumpers and side sills is exclusive to the ST-Line, so are the eye-catching 20-inch bright finish with black insert alloy wheels wrapped in 245/50R20 tyres all-round.

The power-fold exterior mirrors are heated and come with puddle lamps on the underside. They auto-dip on reverse and the driver’s side is electrochromatic (anti-glare in layman’s terms).

While the exterior has hit all the right notes for the quintessential urban SUV, it’s a slightly different story on the inside. If the Endura is to sit in its own space as a premium offering in Ford’s rather utilitarian SUV line-up, then its interior is a little uninspiring for its own intent.

There’s the usual Ford dashboard layout, with the infotainment touchscreen in the centre flanked by a pair of air-con vents and below it a button galore where the all the controls for the media and climate adjustment sit. While the buttons are large enough for easy use, we’d prefer to rotate some knobs than press buttons to adjust the cabin temperature. And speaking of which, where are the temperature readouts? We know they are shown on the centre screen but they get lost when certain menus are displayed. 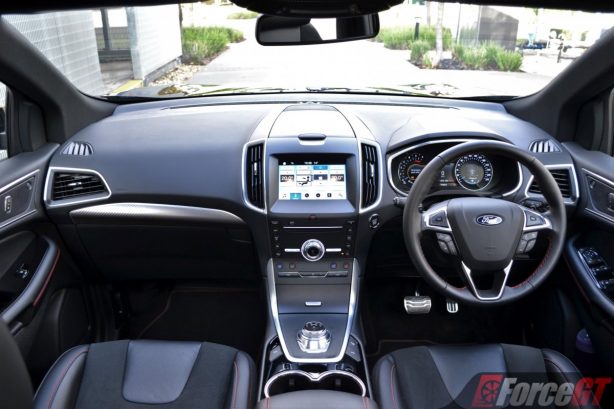 Instead of for the climate controls, a knob is used for the gear selector, which we absolutely have no problem with. But the plastic trim that surrounds it looks and feels a little low-rent. The same trim is applied to the entire centre console and we think this cheapens out an otherwise upmarket interior.

The steering is of the right size and lovely to hold, the soft-touch surfaces on the upper dashboard and door cards feel quality, the contrast stitching on the leather is neat, and the shiny aluminium-look and gloss black trim inserts add a touch of glamour to the otherwise monotone interior. 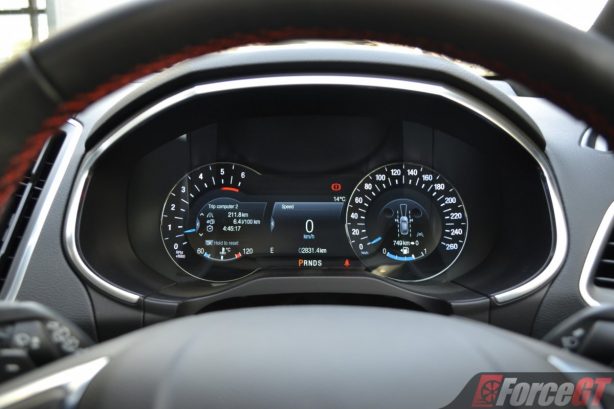 Ford’s SYNC 3 8-inch infotainment system is one of the most user friendly in the segment, not to mention delightfully responsive to the touch, though we question the use of non-QWERTY keyboard. It features AM/FM/DAB+/Single CD audio, along with Apple CarPlay and Android Auto smartphone connectivity.

The sound through the standard 9-speaker audio is also pretty decent, though audiophiles might want to upgrade to the banging B&O 12-speaker audio which also brings a 180-degree front split view camera.

Elsewhere, the 10-inch digital instrument cluster impresses in the way it seamlessly blends digital display with conventional analogue gauges to form a single cohesive unit that not only looks cool but is also functional. 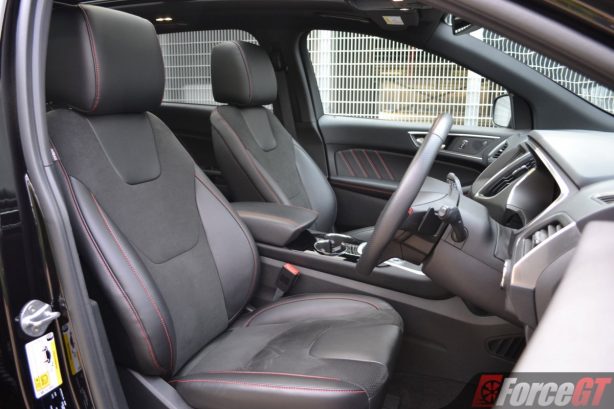 The ST-Line’s suede/leather seats not only look good but are also very comfortable, with the 10-way power adjustable front pews giving excellent support through those thick side bolsters. There’s also a spot next to each front seats for your umbrella. The memory driver’s seat is welcomed but during the test week it failed to recall memory position numerous times.

From behind the wheel, all round visibility through the vast glass house is good though the front quarter view is hindered by the thick A pillar base. And we could also hear slushing of fuel under heavy braking, perhaps a little more sound insulation underneath would help, Ford? 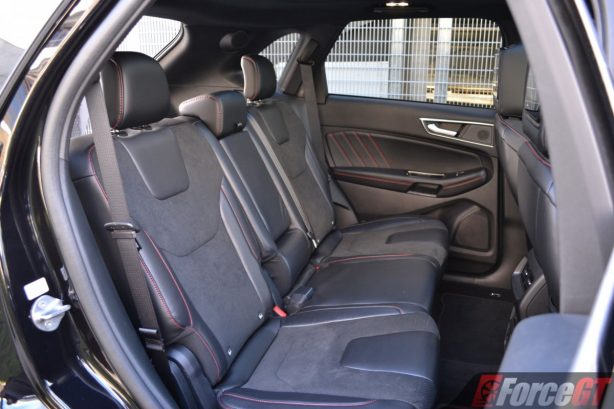 There’s heaps of room inside, not surprising given the Endura’s size and the fact that it only has five seats. Headroom remains vast even with the optional dual-panel panoramic glass roof (fitted to test car). Rear legroom is especially generous, but that’s before you see the cargo area, which is absolutely capacious. We are talking 800 litres of space, and if that’s not enough, drop the rear seats and you get a voluminous 1847 litres.

With so much room in the back, Ford could have easily fitted a third row of seats back there to give buyers the option of 7 seats. Watch this space.

The optional rear seat entertainment fitted to our tester is great to keep the kids occupied during long trips. The dual rear screens are non-touch but do come with a pair of remote controls and wireless headphones.

The entire Ford Endura range is powered by a 2.0-litre common-rail turbo diesel engine developing 140kW @ 3500rpm and 400Nm @ 2000-3000rpm. While there’s nothing really advanced about the engine – it doesn’t even have idle stop/start of help with efficiency – it does deliver near premium levels of refinement. There’s barely a hint of diesel clatter inside and it’s muted most of the time.

Matched with a smooth shifting 8-speed automatic transmission, the diesel is generally lazy and relaxed, with it benefiting from the strong low down torque for effortless acceleration. It’s just a shame that Australian models miss out on the more powerful 154kW/450Nm version of the same engine that is sold in its native North America. 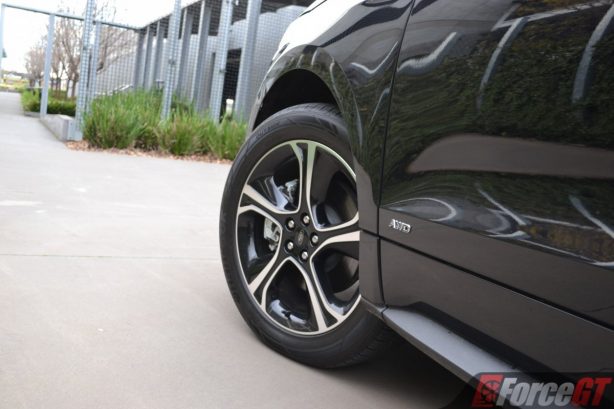 Our tester is the all-wheel drive variant which offers excellent traction on tricky surfaces, not to mention much more effective than front-wheel drive models in harvesting the diesel’s high torque.

There’s no denying that the Endura is a big and heavy 2-tonne SUV, and it shows in the bends. There’s a tad more body roll than desired, which is not unexpected for a high-riding SUV, but it remains well composed and secured.

The steering is precise and adequately weighted without feeling overly heavy, while the brakes are strong and nicely progressive.

Even with the slightly firmer sports suspension, the ST-Line rides well on our crumbling roads, soaking up bumps and ruts with aplomb. The cabin is impressively quiet, too, with wind noise around the large side mirrors just about the only noise you’ll hear, all thanks to the active noise cancellation technology. Using highly sensitive microphones to detect and measure unwanted noise, the speakers emit opposing sound waves to cancel it out. 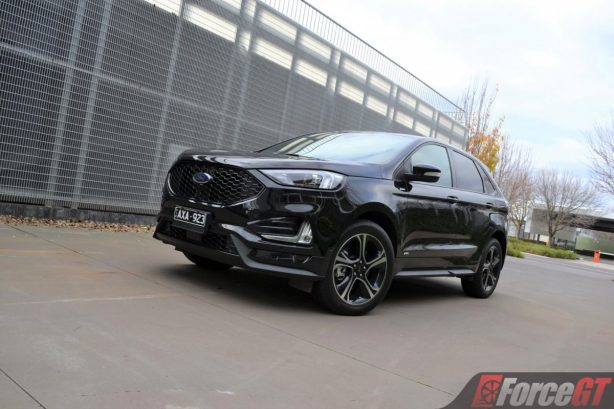 Like almost everyone else these days, the Endura comes with a 5-year/unlimited kilometre warranty.

In terms of servicing the Endura requires a visit to the dealer every 15,000km or no longer than 12 months, which ever comes first. Servicing cost for the first 4 visits is capped at just $299.

Fuel consumption is rated at 6.7L/100km on the combined cycle. On test with over 700km of mixed roads traveled the Endura managed 7.1L/100km which is quite impressive for a large family SUV. And it’s all thanks to the efficient turbo diesel engine.

The Ford Endura combines spacious interior, refined drivetrain and up-to-the-minute tech and packages it with premium touches and sporty, undomesticated looks. Its unique proposition is given, but the lack of a third row of seats may be a deal breaker for some families.