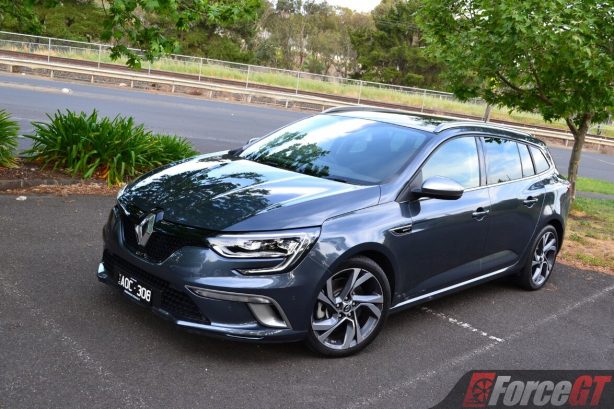 There is a common misconception that if you need space, you buy an SUV. The truth is, quite often you will find more space in the back of a wagon than an SUV. If you don’t need the ground clearance and all-wheel drive (though wagon like the Subaru Levorg is AWD), a wagon may be the better family hauler. The problem is a wagon is not quite a pretty thing to look at. Until this new fourth-generation Renault Megane wagon comes along.

Like its hatch sibling, the new Megane wagon is a quantum leap from its predecessor boasting a completely redesigned sheetmetal that makes it one of the best looking wagons around. Boosting appeal further is a classy new interior that is capable of giving the Volkswagen Golf a run for its money.

From the outset, the 2017 Megane wagon is a promising effort from the French car maker. Available in three flavors starting from the entry level Life, mid-spec GT-Line, and range-topping GT, the Megane wagon fetches a $1,000 premium over the hatch with prices range from $28,490 to $39,490 plus on-road costs.

Powertrain line-up mimics that of the Megane hatch. It’s an all petrol affair with the Life and GT-Line models powered by a 1.2-litre turbocharged four-cylinder engine delivering 97kW and 205Nm of torque. All models are mated with a 7-speed dual-clutch transmission which Renault calls Efficient Dual Clutch (EDC).

To remain relevant in today’s SUV-obsessed car buying public, the wagon needs a big shake up in terms of styling and that’s what Renault have done with the Megane. Making big statement against key rivals such as the Volkswagen Golf wagon, Skoda Octavia wagon and Subaru Levorg, the Megane wagon has taken on a completely new design that is very much its own. It certainly looks the part, in a good way, with enough startling details that could very well draw in buyers from image conscious SUV buyers.

Looking head on, it certainly has road presence with those striking C-shaped daytime running lights joined by a wide grille. Equally French-esque at the rear are those eye-catching taillights that stretch the entire width of the car, neatly intersected by the Renault logo in the center. The blacked-out D-pillar looks like an afterthought but works to give the car a ‘floating roof’ effect and a sleek silhouette.

From all angles the Megane wagon looks lower and wider than most of its rivals, giving a sporty appearance that should resonate well with not just families but also younger buyers.

It’s a similarly good effort on the inside. Renault has clearly gone the path of pushing the interior upmarket and they have done a remarkable job, especially in the upper-spec GT-Line and GT variants. It feels premium inside with generous lashings of polished aluminium trim in the dashboard, door and centre console, complemented by high quality soft touch materials throughout.

Usually only found in luxury cars costing much more, the portrait-orientated iPad-style 8.7-inch infotainment touch screen and 7.0-inch digital instrument panel in the GT-Line and up further elevates cabin ambience, while strips of cabin mood lighting on the doors and centre console, changeable in colours, add a touch of class.

General ergonomics are good, though we find the air con controls hidden within the infotainment screen an inconvenience. Hard buttons would be preferred. When certain screens or menus are displayed, the climate control’s temperature readouts also annoyingly disappear.

A bigger flaw is the gear lever indicator which is hidden from view completely as it’s positioned to the left of the lever, on the wrong side for a right-hand-drive model – blame it on cost costing.

The GT-Line and GT models we tested come equipped with leather-Alcantara sports front seats which not only look good but provide great comfort and support, even for long trips.

With a stretched wheelbase that is 43mm longer than the hatch, the wagon liberates an extra 37mm in rear legroom, resulting in a more spacious seating for three adults in the rear.

The wagon’s longer length of 296mm also yields a larger boot – some 580 litres, up from the hatch’s already impressive 434 litres. Drop the 60/40 rear folding seats and the space expands to an enormous 1504 litres, 162 litres more than that of the Mazda CX-5 SUV. The flat boot comes complete with a low loading lip (much lower than any SUV) to make lifting heavy items into the back a breeze.

The 1.2-litre engine that powers the Zen and GT-Line variants may seem lacking in displacement but thanks to a turbo there’s a healthy 205Nm of torque peaking at just 2,000rpm. And it’s far from being underpowered. A slight turbo lag is evident getting off the line, but once on the go it feels sprightly around town, getting up to suburban speeds effortlessly with swift in-gear acceleration allowing for easy overtaking. Plant your foot on the throttle and you will get slight torque steer but it isn’t distracting.

Where it starts to lose a bit of puff is at above 4,700rpm though it feels faster thanks to an engine sound synthesiser adding a sporty tinge to the other uninspiring engine note.

Its refinement level matches some of the best in class, including the Golf, with a seamless auto stop/start operation and the well calibrated 7-speed dual clutch transmission offering snappy gear changes. There’s none of the ‘slippage’ on take off commonly found in gearboxes of this type but it tends to jerk through downshifts when coming to a halt.

Those who move around with a full load or a trailer should opt for the more powerful 1.6-litre turbo GT where its 151kW of power and 280Nm of torque give almost hot hatch-like pace and performance, delivering quicker acceleration and a genuinely sporty soundtrack. It’s a refined unit but we feel the smaller 1.2L engine is just a tad crisper and smoother under heavy throttle.

The larger engine is matched with the same 7-speed dual clutch gearbox which harnesses its extra punch brilliantly, tapping into its abundance of low- to mid-end torque when cruising, all the while ready to drop a few ratios when more performance is called for. The GT also adds a pair of premium-look aluminium paddle shifters for manual gear operation. They offer a tactile click but are too small given that they are mounted on the rack and not the wheel. Positioned just before the steering wheel stalks, the paddles also obstruct the labels on the stalks.

Renault’s sporting DNA is very much evident the moment you point the Megane to a twisty stretch of road. The chassis is excellent and there’s brilliant composure with minimal body roll around the bends. The sharp, Renault Sport-infused handling is made more satisfying with that wonderfully precise steering with good feedback and weightage.

Adding to the sporty driving experience are the meaty brakes with good stopping performance if not a little inconsistent in feel.

Dig deeper into its dynamics and you’ll be limited by the eco tyres on non GT models which struggle for grip. The engine also feels lackluster at the top end. The GT however, with its sports-tuned suspension set-up, has a broader dynamic ability which sees it point more keenly into corners, sustained by greater grip levels from the lower profile high performance tyres.

The Megane wagon’s sharp handling does come at a compromise around town. Its firm ride lets you feel more of the road surfaced compared to others in class but is not uncomfortable. The cabin is well isolated from road and wind noise, offering a quiet ride both in urban setting and on the freeway.

Renault has made big strides with quality in their latest range of products and the new Megane wagon is no exception. The cabin appears solidly put together with good panel fitment and alignment though the centre console storage cover tends to drop easily from its upright open position, posing a potential clipping hazard.

While the Megane has not been crash tested in Australia at the time of this writing, it scored the maximum 5 star Euro NCAP rating. 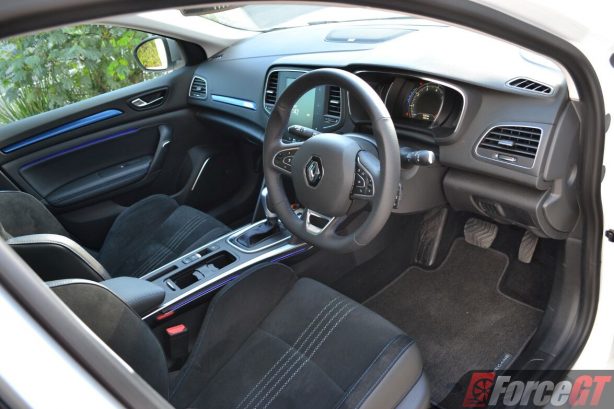 The 1.2L turbo four is rated at 6.2L/100km on the combined average though it recorded 8.3L/100km at the end of our week-long test through varying types of roads and traffic conditions, including country driving. The figure matches the average for this segment but on the freeway it sips around 4-5L/100km which is pretty impressive.

The mid-spec model can be optioned with a Premium Pack (Bose audio system and Pure Vision LED headlights) and 18-inch alloy wheels.

Strangely, the supposedly range-topping GT model lacks blind spot warning and panoramic sunroof, both of which come as standard in the GT-Line.

The all-new 2017 Renault Megane wagon is well worth a look if you are looking for an appealing package with standout design, SUV-rivaling space, efficient powertrain and good dynamics. The entry-level Zen represents good value but if budget permits opt for the GT-Line for a sportier look and more premium cabin. For keener drivers, the Renault-Sport GT impresses with sharp handling and a punchier engine.