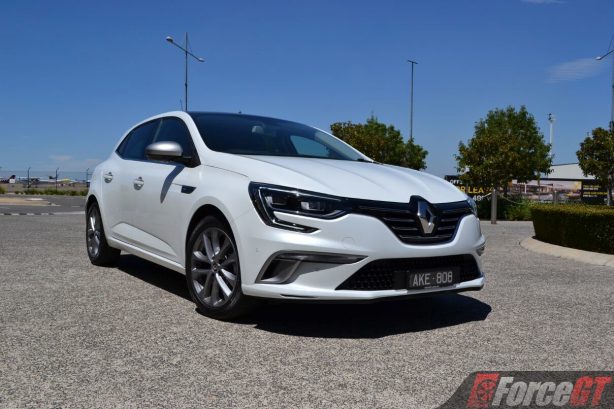 If you’re in the market for a small car, perhaps it’s time to check out the new Renault Megane. Now in its fourth generation the new Megane is a quantum leap from its predecessor boasting a completely redesigned sheetmetal, an interior capable of giving the Volkswagen Golf a run for its money and one of the most refined powertrains in its class.

Yup, traits that until now seem foreign to the nameplate, but here they are in what appears to be the French carmaker’s best shot at this highly competitive segment currently dominated by the Mazda 3, Volkswagen Golf and Toyota Corolla.

The Life, Zen and GT-Line are powered by a 1.2-litre turbocharged four-cylinder engine delivering 97kW and 205Nm of torque. All models are mated with a 7-speed dual-clutch transmission, except for the entry-level Life variant which can be had with a 6-speed manual.

The range topping Megane GT meanwhile features a 1.6-litre turbocharged four-cylinder engine producing 151kW and 280Nm of torque. It also gains RenaultSport-engineered suspension for a sportier drive, as well as an electric sunroof (optional on other variants).

In such a crowded segment, the new Megane needs a big step up in terms of styling if it was to make a statement against the classy Volkswagen Golf, curvaceous Mazda 3 or the new-age Honda Civic. To that end, the Megane has taken on a completely new design that is very much its own. It certainly looks the part, in a good way, with enough startling details to appeal to the image conscious demographics so common to this segment. 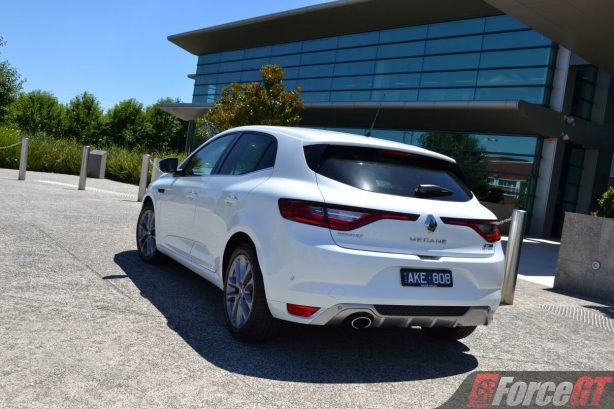 We like the striking C-shaped daytime running lights, wide grille and those eye-catching rear lights that stretch the entire width of the car intersected by the Renault logo. The car is sleek from all angles and looks lower and wider than most of its rivals, giving a sporty appearance that should resonate well with younger buyers.

If the exterior is great then the inside is simply brilliant, especially in the upper-spec GT-Line and GT variants. Renault has clearly gone the path of pushing the interior upmarket and we are glad to say they have done a remarkable job. It feels premium inside with generous lashings of polished aluminium trim in the dashboard, door and centre console, complemented by high quality soft touch materials throughout.

Usually only found in luxury cars costing much more, the portrait-orientated iPad-style 8.7 inch infotainment touch screen and 7.0 inch digital instrument panel in the GT-Line and up further elevates cabin ambience, while strips of cabin mood lighting on the doors and centre console, changeable in colours, add a touch of class. 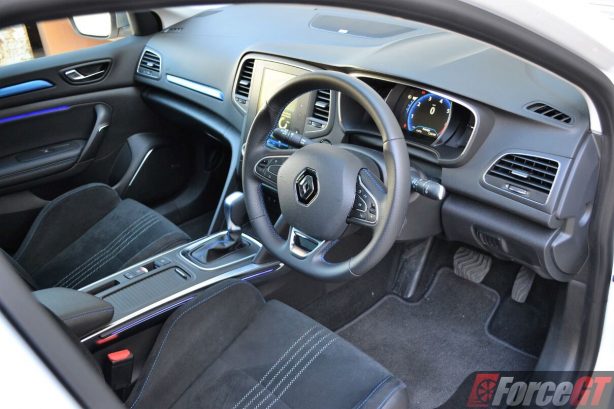 The GT-Line tested here comes equipped with leather-Alcantara sports front seats which not only look good but provide great comfort and support, even for long trips. Legroom at the back is adequate though taller passengers may find headroom a little tight due to the low slung roof line. The Megane has rear air vents, a feature which is still lacking in some of its rivals.

The Megane’s large 434 litres of boot space triumphs even the Golf’s and can be extended to 1,247 litres with the 60/40 split rear seats tumbled.

The 1.2-litre engine that powers the Lift, Zen and GT-Line variants may seem lacking in displacement but thanks to a turbo there’s a healthy 205Nm of torque available from just 2,000rpm. It feels sprightly around town with swift in-gear acceleration allowing for easy overtaking at suburban speeds. Above 4,700rpm though it starts to lose punch and the sprint to 100km/h takes a rather lethargic 10.3 seconds but it feels faster thanks to an engine sound synthesiser adding a sporty tinge to the other uninspiring engine note.

Its refinement level matches some of the best in class, including the Golf, with a seamless auto stop/start operation and the well calibrated 7-speed dual clutch transmission offering snappy gear changes. There’s none of the ‘slippage’ on take off commonly found in gearboxes of this type but it tends to jerk through downshifts when coming to a halt. 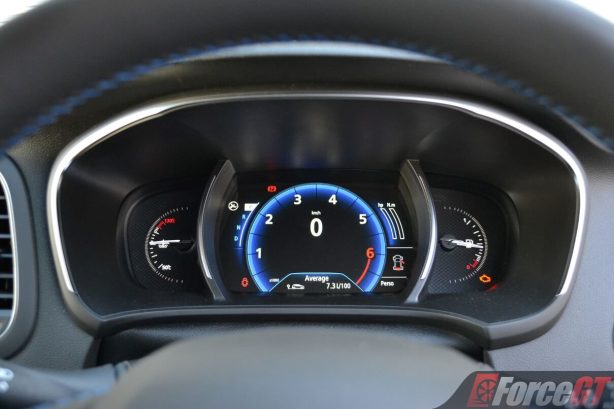 On the down side, there are no steering wheel-mounted paddle shifters, even on upper spec model like the GT-Line and the gear lever indicator is hidden from view completely as it’s positioned to the left of the gear lever, which is the wrong side for a right-hand-drive model – blame it on cost costing.

Renault’s sporting DNA is very much evident the moment you point the Megane to a twisty stretch of road. The chassis is excellent and there’s brilliant composure with minimal body roll around the bends. The sharp, Renault Sport-infused handling is made more satisfying with that wonderfully precise steering with good feedback and weightage. Adding to the sporty driving experience are the meaty brakes with good pedal feel.

Dig deeper into its dynamics and you’ll be limited by the eco tyres which struggle for grip. The engine also feels lackluster at the top end.

The sports oriented suspension lets you feel a tad more of the road surfaced compared to others in class but is far from uncomfortable. The cabin is well isolated from road and wind noise, offering a quiet ride both in urban setting and on the freeway. 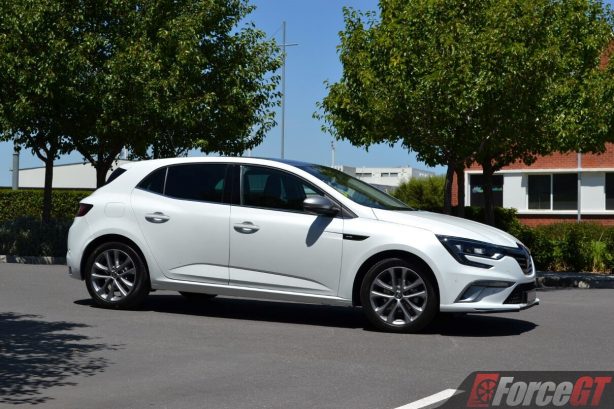 Renault has made big strides with quality in their latest range of products and the new Megane is no exception. The cabin appears solidly put together with good panel fitment and alignment though the centre console storage cover tends to drop easily from its upright open position, posing a potential clipping hazard.

While the Megane has not been crash tested in Australia, it scored the maximum 5 star Euro NCAP rating.

The turbo four recorded an average fuel consumption of 7.4L/100km at the end of our week-long test through varying types of roads and traffic conditions, including several trips to the country. The figure matches the average for this segment but on the freeway it sips around 3-4L/100km which is pretty impressive. 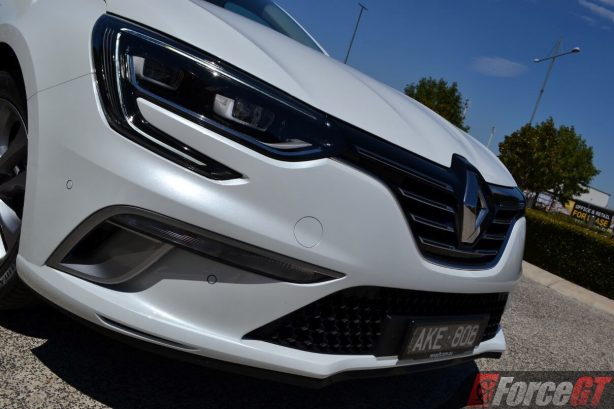 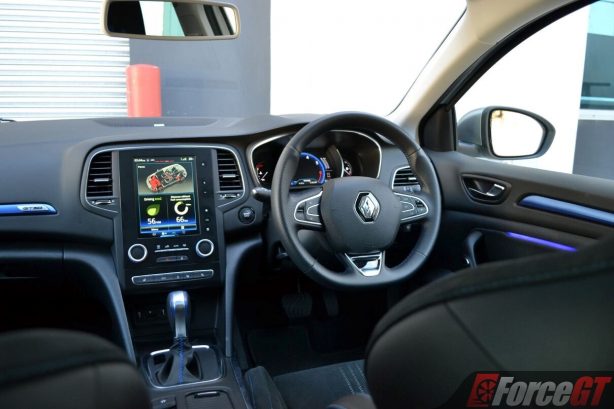 Apple CarPlay and Android Auto are glaring omissions across the range, while Automatic Emergency Braking is missing even in the top spec GT model.

Like all Renault passenger cars and R.S. models, the new Megane comes with a five year unlimited kilometre warranty, five years of roadside assistance and Capped Price Servicing for the first three scheduled (annual or up to 30,000km) services, priced at $299 each.

The all-new 2017 Renault Megane is now a viable alternative to the big hitters in the small car segment. It brings an appealing package with standout design, modern powertrain, good dynamics and classy interior. The mid-spec Zen represents the best value but if budget permits opt for the GT-Line with Premium Pack tested here for a sportier look and more premium cabin.