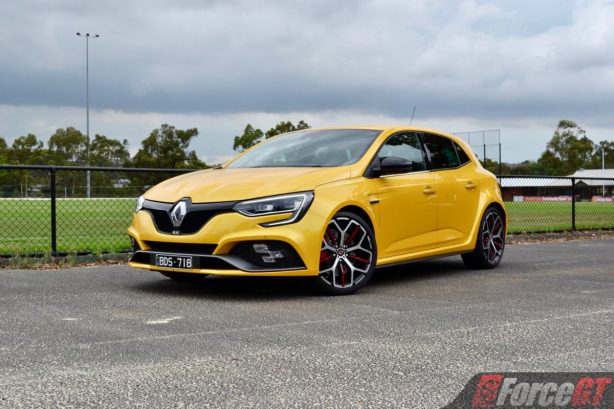 How hot do you like your fried chicken? Mild, medium, hot, really freaking hot? What if we could also choose the intensity of our hot hatches? Well, with the new Renault Megane R.S., we can. You choose from Sport, Cup, Trophy and Trophy-R, with incremental hotness from Sport to Trophy-R.

Priced at $45,990 before on-road costs, the Megane R.S. 280 Sport, as its name suggests, packs 280 horsepower or 205 kW. The $48,990 Megane R.S. 280 Cup outputs the same figure but receives revised springs, dampers and bump stops for an overall 10 per cent stiffer suspension set up, along with Torsen mechanical limited slip differential at the front axle.

Turning up the heat, the $52,990 Megane R.S. 300 Trophy gets the same chassis set up as the Cup but ups the ante with a more powerful version of the same engine packing, you guessed it, 300 ponies or 220 kW. Only 100 examples of the Trophy are brought in for sale in Australia.

Essentially a road legal racing car, the Trophy-R is the most hardcore Megane R.S. available, and at $74,990, the most expensive too. From the absence of rear seats to the adoption of carbon wheel rims, the Trophy-R sees a drastic 130kg reduction in weight compared with the standard car. The track-spec suspension is fully adjustable and with a lot of money Renault will throw in a set of carbon ceramic brakes. The aerodynamics have been revised with specific underbody fairings and carbon diffuser.

The Trophy-R is the current Nürburgring record holder for the front-wheel drive segment with a lap time of 7 minutes 40.1 seconds, 3 seconds quicker than that held by the previous ‘ring king, the Honda Civic Type R. 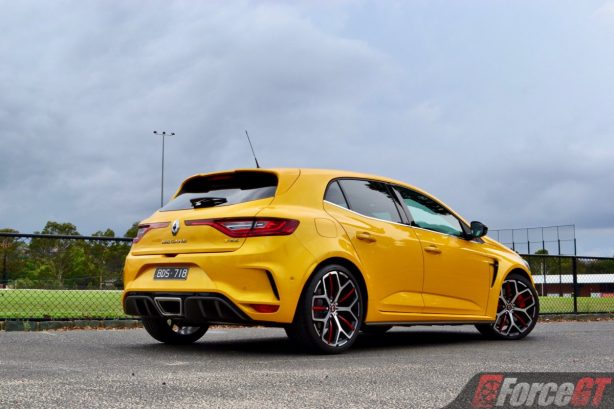 We tested the Megane R.S. 280 Sport last year and liked its near perfect blend of poise, performance and balance. But we knew within it there were still some firecrackers left to unleash, and here we are now with the full-fat Megane R.S. 300 Trophy.

Power hike and chassis tweaks aside, the Trophy also gets you a few extra goodies. The tasty looking 19-inch wheels with red highlights are exclusive to the Trophy and trim 2kg at each corner. Tucked within each wheel are red brake calipers acting on special bi-material lightweight discs which further reduce unsprung mass. The upgraded exhaust features an ‘active-valve’ system for an even racier tone. And lastly, the front wing proudly spells out ‘Trophy’ in case it’s being mistaken as a lower spec Sport. 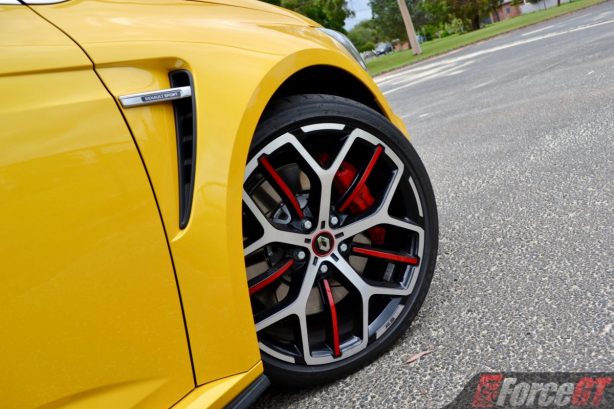 While there aren’t many other Trophy distinguishing details, the Megane R.S. is a good looking machine with plenty of road presence, especially in the Liquid Yellow signature metallic paint ($1000 option) of our test car. All R.S. are now four-door only – admittedly we do miss the previous two-door body – and the new styling is no doubt more mature but the wide body, pumped up bumpers, side vents and 19-inch wheels do spell out its performance credentials to wicked effect. The Volkswagen Golf GTI might as well be invisible next to this.

Inside, the Trophy is identical to that of the Sport or Cup, with the only difference being the steering wheel, which is wrapped in leather-Alcantara, as opposed to full leather in the Sport. Nevertheless the cabin ambiance feels both sporty and upmarket. The former is highlighted by the chrome-plated R.S. door sills, custom R.S. roof lining and heavily bolstered bucket seats with dark carbon R.S. upholstery, while the latter is evident by the generous lashings of polished aluminium inserts in the dashboard, door cards and centre console, complemented by quality soft touch surfaces throughout. 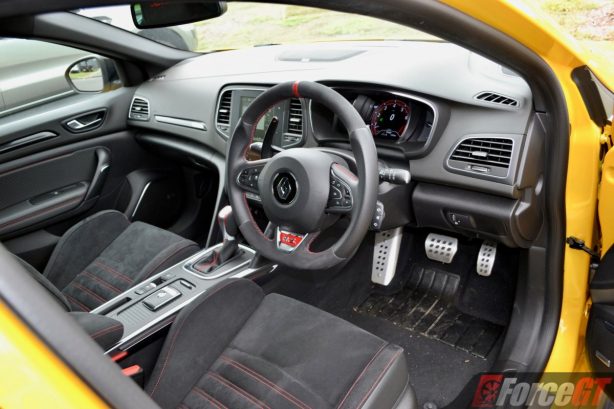 All R.S. models feature R.S. Monitor which serves up a huge array of performance and driving data on the 8.7-inch infotainment touchscreen. It also includes Monitor Expert which lets drivers connect a camera (either a traditional camera or their smartphone camera) to film their drive. They can then play it back on the spot or share the clip on social media. As part of the 2020 update to the Megane range, Apple CarPlay and Android Auto connectivity is now supported.

Based on the standard Megane hatchback body and like the rest of the Megane R.S. range bar the Trophy-R, the R.S. Trophy can seat five and has a sizable 434-litre boot, expandable to 1247 litres with the 60/40 split rear seats folded. 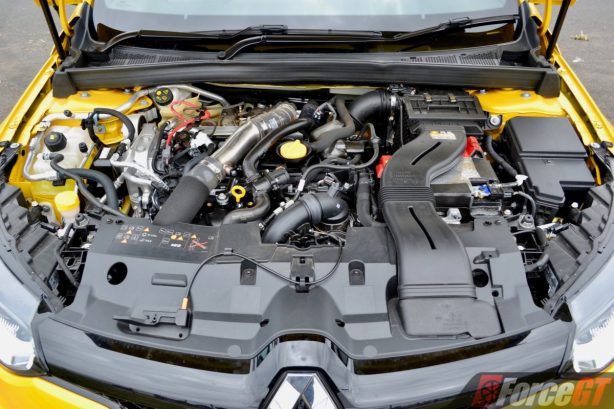 With a bigger turbocharger with lighter ceramic ball bearing turbine, the 1.8-litre four-pot in the Trophy pumps out a potent 220 kW at 6,000 rpm, making it the world’s most powerful 1.8-litre engine. It’s accompanied with 420 Nm of torque peaking at 3200 rpm (400 Nm for the manual variant). Its potential is evident the moment you thumb the engine start button, at which time a rorty burble with a metallic tinge emits from the exhaust. This thing sounds more like a track day special than your regular garden variety hot hatch (and this isn’t even the Trophy-R).

Put the EDC into drive (we wish Renault had supplied us with a manual car instead) and feed in the revs, the soundtrack remains properly enthusiastic but it’s the way it pulls and drives that will put a bigger grin on your face. The dash from 0 to 100km/h is accomplished in just 5.7 seconds, making it one of the fastest hot hatches around. Like the Civic Type R, the Trophy has enormous mid-range punch. Keep the engine boiling at between 3,000 to 6,000 rpm and every squeeze of the right pedal translates to a ferocious shove in the back, accompanied by a frantic howl as the revs near the limiter. And on lift off, the new exhaust also delivers a full repertoire of pops and bangs, to the amusement / disgust of outsiders. 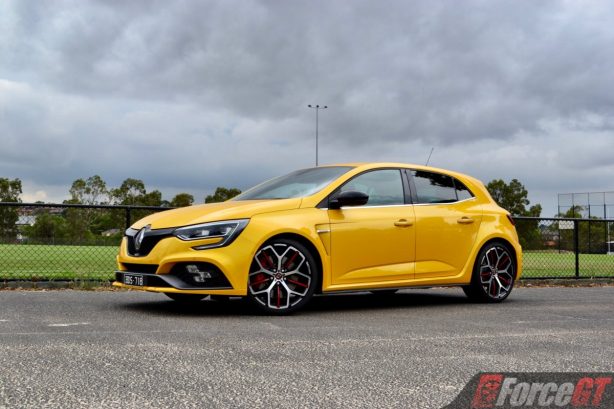 The stiffen chassis and limited slip diff do wonders around corners, with the Trophy carving through them like it’s on rails. The steering is super quick, allowing for razor sharp response, and despite being front-wheel drive the nose is incredibly locked down, allowing for crisp direction change.

Renault’s tricked four-wheel steer system comes into play in hairpin corners, where the rear wheels angle a few degrees in the opposite direction of the front wheels to tuck the nose into a tight bend. And if the car thinks this isn’t enough, there’s also brake actuated torque vectoring to further tighten its line.

The firm dampers mean body roll is kept in check at all times, and the bespoke Bridgestone Potenza S007 tyres are more than a match to that brilliant chassis, offering tons of grip at the chassis’ disposal to keep things tidy. 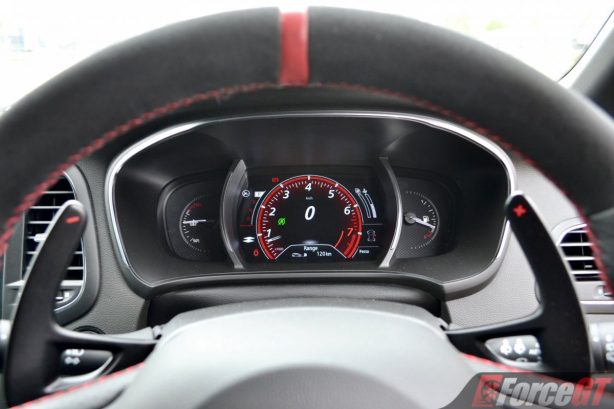 The extra helping of power and tauter underpinnings means the Trophy does feel noticeably quicker and nimbler than the Sport in all proceedings. The lighter brakes and wheels also contribute to slightly better stability under heavy braking.

No doubt, the Trophy is a heap of fun, both on the track and on a stretch of challenging back roads, so long as the tarmac is flat and smooth. Why? Because the Trophy is way too firm on anywhere else. It’s not exactly trashy but it’s just unbearably bumpy and near unusable on our broken roads. This is an out and out track car, certainly not a daily driver. 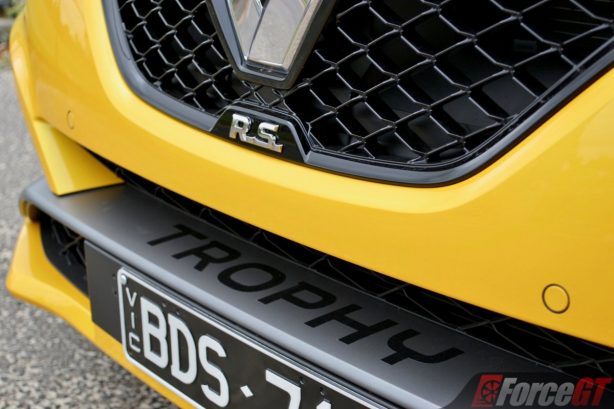 In terms of efficiency, the Trophy is rated at 8.0L/100km on the combined average, slightly thirstier than the Sport’s 7.5/100km. On test however, we averaged 9.2L/100km at the end of our week-long evaluation with, admittedly, quite a few stints of heavy right footed driving. As a performance focused hatch, that’s not half bad.

The Renault Megane R.S. 300 Trophy is an astonishingly capable performance hatch that plays in the same league as other big go-faster names like the Honda Civic Type R and Ford Focus RS. The harder you drive the Trophy, the better it gets and the more rewarding it feels. It’s an absolute track weapon, no doubt, and one that would appeal to purists.

But unless a visit to the track is part of your weekly routine, we’d stick with the more forgiving, more all-rounded, yet just as entertaining 280 Sport.