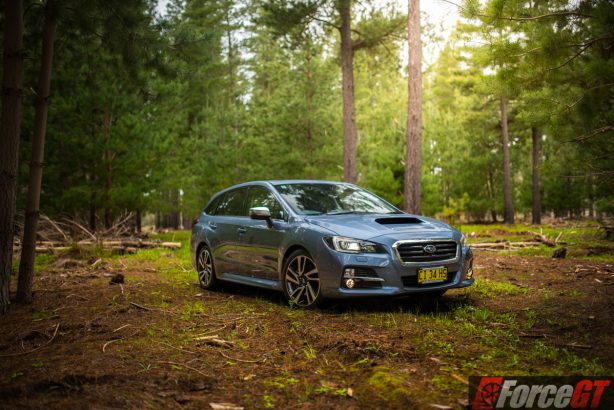 According to Subaru, the Mark 4 Liberty GT wagon is much missed, so much so that the firm has dusted off the Liberty’s old template and remolded it into the oddly named Levorg.

First previewed as a concept at the 2013 Tokyo Motor Show, the car’s name comes from a blend of the words ‘Legacy’, ‘revolution’ and ‘touring’. Who would have known?

And while the name may be peculiar, its design and concept is rather straightforward. The front half of the body is derived from the Subaru WRX, while the rear half is all new. 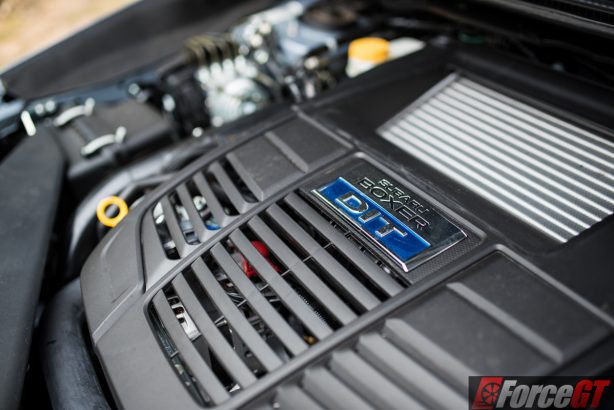 The WRX DNA doesn’t stop there, either. Underneath the bonnet is a 2.0-litre direct-injected flat-four lifted straight from its more athletic sibling, delivering the same 197kW of power at 5,600rpm and 350Nm of torque from 2,400 – 5,200rpm.

It drives all four wheels via a Continuously Variable Transmission (CVT) – the only transmission on offer on the Levorg.

The car comes to Australia in two variants; the 2.0GT and the 2.0GT-S. Priced from $42,990, the entry-level model looks essentially the same as the $48,890 GT-S, safe for its dark metal finished front grille, body coloured mirror caps and monotone 18-inch alloy wheels.

GT-S customers can also order the Spec B kit, which brings a wide range of local fit STI parts and accessories for an additional $4,000 (separate review coming later). 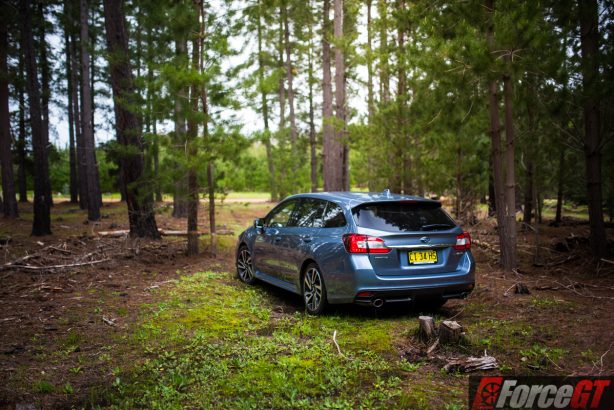 The Levorg’s muscular surfacing, imposing details and flowing roofline give the car a positively sportier stance than the Liberty GT from a decade ago. Like the WRX, there’s an air scoop in the middle of the bonnet hinting at the turbocharged power within.

It is arguably one of the more attractive vehicles to come out of Subaru, which often disappoints with its laughably toned down production cars after dazzling the crowd with stunning concepts.

Inside, Impreza and WRX owners are likely to get acquainted quickly as much of the architecture and aesthetic have been transplanted practically wholesale, although with improved trim materials. A larger proportion of the dashboard is now soft-touch, too. 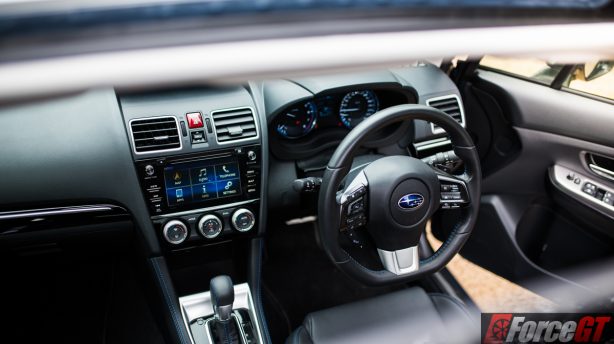 A pair of power adjustable and memory (driver’s only) sports bucket seats welcomes the driver and front passenger into the GT-S. They are supportive and comfortable, although we find the GT’s ‘regular’ front pews to be lacking in lumbar support.

Front seat occupants are well catered for with plenty of storage spaces dotted around the cabin. There are AUX, USB ports and a 12 Volt power socket ahead of the gear shifter to cater for our modern appetite for anything digital, while rear seat passengers have access to two USB power charger ports, along with an additional 12 Volt power socket inside the centre console – perfect for the family road trips.

The analogue instruments layout is clear and sensible, and we can’t fault the car’s ergonomics either. 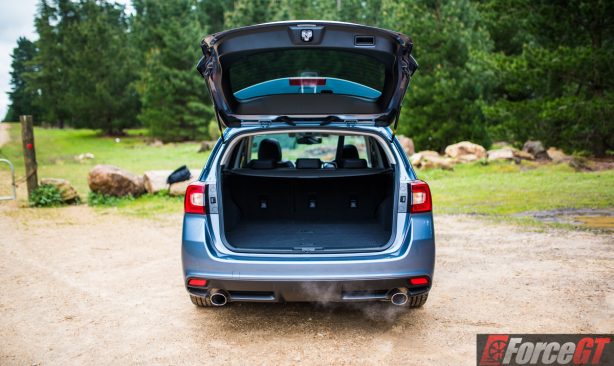 While the Levorg is slightly smaller externally than a fourth-generation Liberty, its shapely rump has 27 litres more luggage carrying capacity and yields better legroom at the back, thanks to modern design and clever packaging.

The generous passenger space is topped by a load bay that is suitably large, offering 522 litres of cargo space with the rear seats up. With the 60/40 split rear seats folded, the capacity expands to 1,446 litres. And thanks to a load bay length of almost 1.9m, the Levorg fulfills its brief of being practical yet compact.

Underneath the attractive styling is a car that is 50% more rigid than the old Liberty. Its front suspension features high strength cross-member and hardened front arm bushings for increased attachment rigidity, while the double wishbones rears get hardened sub-frame and trailing bushings, also to increase body stiffness.

Its permanent all-wheel drive system is connected by a propeller shaft featuring a constant velocity joint with collapsible structure to lessen cabin noise, vibration and harshness (NVH) and enhance safety (it reduces G-force in collisions). 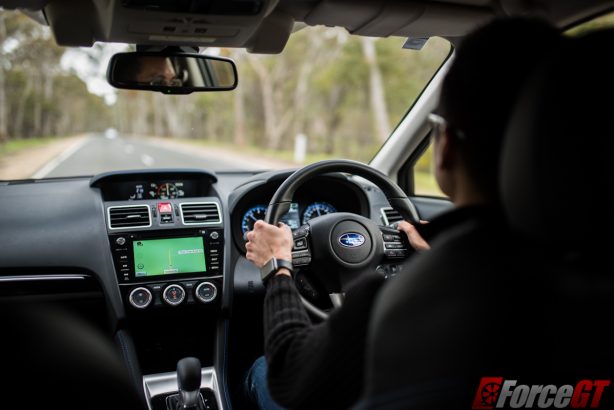 The result is a well-sorted sports wagon that is utterly comfortable to live with on a day-to-day basis. The GT-S, in particular, is impressively sharp and well-balanced, courtesy of its Bilstein suspension.

As you might expect, it rides a little harsher on broken tarmac but is in no way jarring or uncomfortable. Its handsome two-toned 18-inch alloys wrapped in 225/45 Series tyres are sticky and grip with tenacity, guiding the nose through the apex in a tight line.

The GT on the other hand, with its softer suspension, wallows a bit more in corners. Its body control isn’t as tight as the GT-S and is often upset by mid corner bumps. 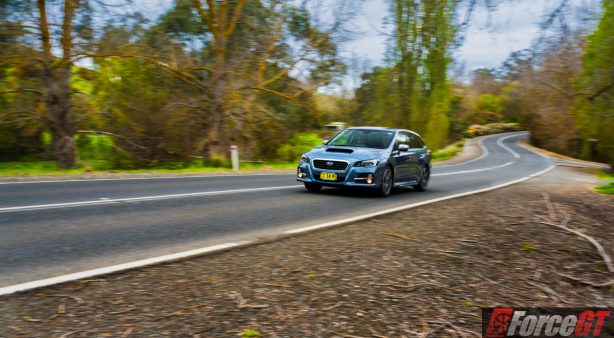 However, as befitting its badge, it is the more comfortable car on wide-open roads where it soaks up most imperfections with ease.

While the Levorg may not be as sharp as the WRX, its underlying traits are all still there. There is a level of driving connection that not many of its rivals possess. Its throttle is easy to modulate and the brakes are progressive and has good pedal feel.

We are not big fans of CVTs but Subaru has done a good job in its calibration where it is largely drone-free. In Sport mode, it even mimics a traditional 8-speed torque converter auto, although it brings a little more jerkiness in the lower gears.

If there is one area of disappointment, it’s the Levorg’s steering where it is dull just off centre. Thankfully, it feels responsive and precise, while feel also improves the more lock you dial in. 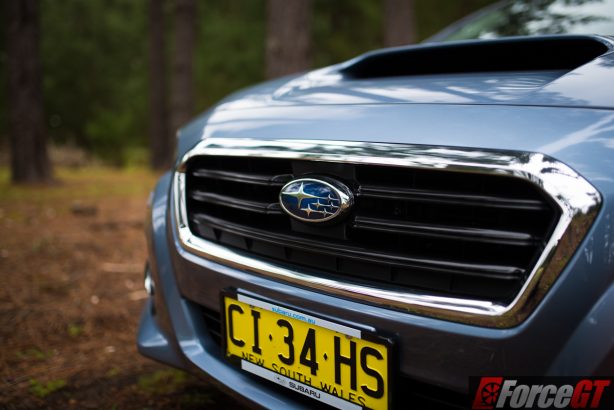 The Levorg isn’t WRX quick, but we still managed to stop the clock at a very respectable 6.48 seconds.

As expected from a Subaru, the Levorg scores 5-star ANCAP rating, with ABS, electronic stability control, traction control and adaptive cruise control all standard. It also comes with Subaru’s Eyesight system, which uses two cameras to scan the road ahead for pedestrians and other vehicles and apply the brakes if the driver fails to.

Disappointingly, there is no DAB+ digital radio and embedded sat-nav is only available on the GT-S. Apple CarPlay and Android Auto have also taken a leave of absence.

While the Levorg may beat to the WRX’s tune, it not quite a WRX. Think of it as a middle aged WRX and you are there.

It is more comfortable and practical, yet still capable of tackling corners with a high degree of agility and precision. Its engine is more muted and less aggressive compare to its more larrikin sibling, but still muscles along briskly.

Importantly, it retains strong control of its body movements that is a trait of the WRX-derived front end.

It’s the ‘WRX’ for the family man.