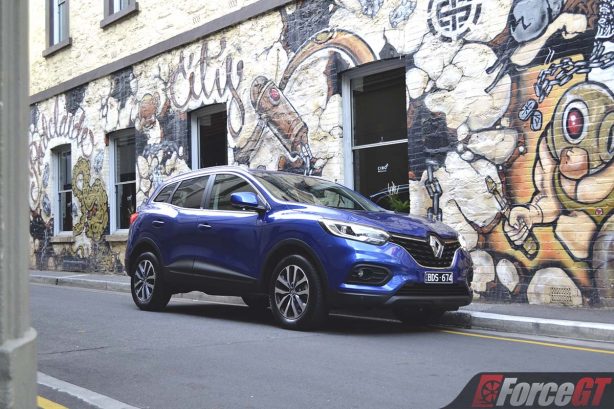 Carmakers are trying to fill every niche possible, especially in the highly fought SUV segment. Take Renault‘s latest entrant, the Kadjar, for example, it sits between the baby Captur and the larger Koleos, and is pitched against the likes of the newly minted Kia Seltos and recently facelifted Mitsubishi ASX.

It first bursts onto the scene back in 2015 and has found more than 500,000 homes since but only made its way to Australian shores recently after a mid-life facelift.

Based on the Nissan Qashqai’s platform as part of the Renault Nissan alliance, the Renault Kadjar is targeted at urban drivers that want something a little bigger than the Clio-based Captur without going all the way to the larger Koleos.

Three variants are on offer starting with the $29,990 Life (before on-road costs), which coincidentally, is line ball in price with the Nissan Qashqai ST and Kia Seltos Sport. 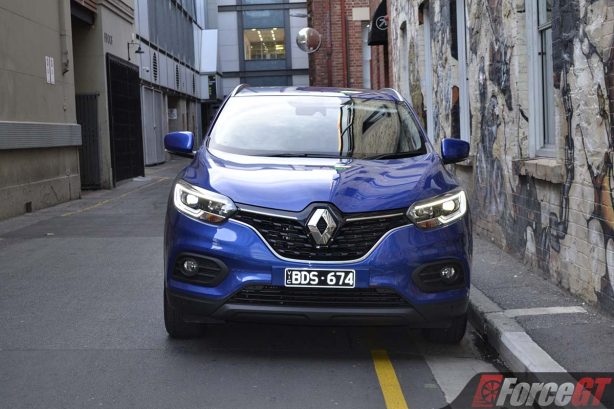 Perched at the top of the line-up is the $37,990 (before on-roads) Intens. It brings niceties such as full LED headlights, heated leather seats, a Bose premium sound system, automatic park assist, 19-inch alloy wheels and a panoramic glass roof. The latter is bundled with an auto-dimming rear-view mirror as a $1,000 option on the Zen.

On the styling front, the Kadjar definitely looks better the more you pay, thanks largely to the larger and better looking wheels that fill up the wheel arches better compared to the undersized 17’s on the lower and mid-spec models.

Its front end shares a family resemblance with the Renault Megane hatch with a prominent eight-point grille and slender headlights that gives the Kadjar a handsome face.

In profile, there are hints of the Qashqai along the trailing edge of the rear doors with a pronounced kink and flare wheel arch, while the black wheel arch extensions and anodised satin grey roof bars give the car a more rugged demeanour. 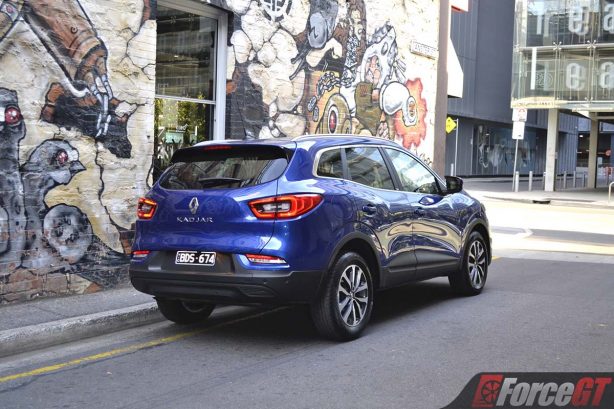 The rear fascia looks equally smart with the K A D J A R script taking pride of place across the middle of the tailgate under the Renault badge, and sandwiched by a pair of stylish LED taillights.

It is certainly the better looking one compared to its softer-looking cousin, the Qashqai. It also doesn’t appear much smaller than the one size up Koleos, as evident by the roomy interior.

There’s plenty of head and legroom both front and back, offering an airy ambience thanks to the expansive glasshouse. It also means over the shoulder visibility is good, which is further augmented by the standard reversing camera.

Like all its class rivals, the Kadjar is a 5-seater. The rear bench seat will easily accommodate three adults in pre-social distancing times but will seat two comfortably these days. 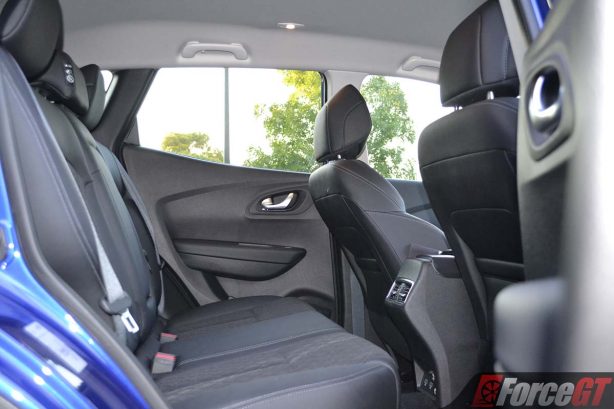 Rear seat occupants in the Zen (and Intens) also get two USB outlets and air vents to make their journey in the Kadjar more pleasant compared to some rivals.

Up front, the chunky front seats are equally comfortable and supportive, although the lack of lumbar support is a sore point – literally. The steering wheel adjusts for reach and rake to accommodate drivers of various statures, while there are two more USB points for the front passengers in the centre console.

There are plenty of storage spaces dotted around the cabin, including sizeable 1.5-litre bottle holders in the doors and seat back pockets.

One of the Kadjar’s strongest selling points is definitely its cavernous 408-litre boot with a handy hidden storage compartment under the boot floor. Ease of use is further enhanced with the conveniently located levers in the cargo area that flips the rear seat backs down with a single pull for a tardis-like 1,478 litres. 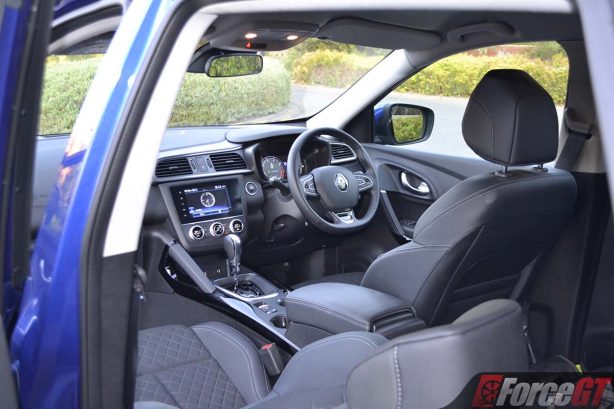 Cabin materials are generally good with soft plastic on most touch points. Fit and finish are up to the mark, too, although the transmission tunnel plastics/trim squeak whenever the driver or passenger’s knee comes into contact with it during cornering. This, apparently, is a common complaint on the Kadjar.

The instrument cluster is digital and would be familiar to those who also own a Renault Megane. It’s clear and easy to read at a glance with a large central digital speedo.

To the left is the 7-inch touchscreen R-Link infotainment system. It won’t win a prize for being the largest, nor smoothest in operation with its thick black bezel, dull graphics. You’ll have to dive into three sub-menus just to get to the radio app. It certainly isn’t a match to the Kia Seltos’ modern and sleek infotainment system that could almost challenge those from BMWs.

However, we do like the climate control dials with digital readouts inside them that give out a contemporary and upmarket vibe. 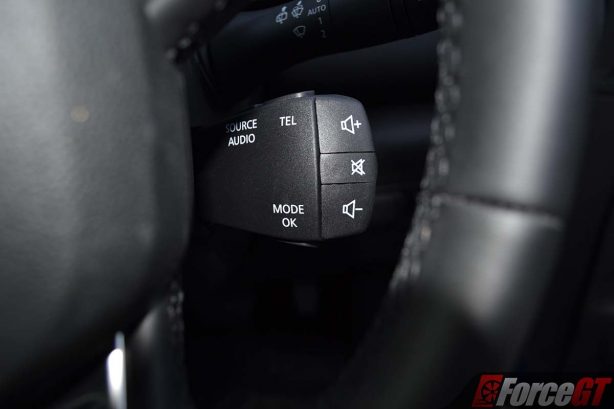 To keep with Renault tradition, a chunky remote control stalk is hidden behind the steering wheel to control the sound system. It might seem counter intuitive initially but once familiarised, is surprisingly easy to use.

Underneath the bonnet, the Kadjar is equipped with a Euro 6-certified 1,332cc turbocharged four-cylinder engine co-developed with Mercedes-Benz. It’s the similar unit found in the base model A-Class and is one of the first cars in Australia to come with a petrol particulate filter. 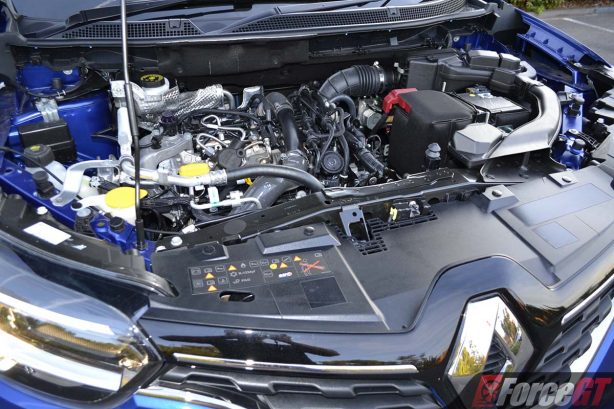 There’s minor lag down low but on the whole, it’s a sweet little unit with plenty of punch and decent engine note. There’s also a healthy dose of mid-range torque on tap for overtaking.

The engine is mated with a smooth shifting seven-speed dual-clutch transmission that is closely related to the one used in the Alpine A110 sports car as standard. Zero to 100km/h is dispatched in a claimed 9.6 seconds.

Engine and throttle responses are good and the EDC is alert, dishing up the right gear almost every time. It’s also not overly jerky at lower speeds, which is a common complaint for such transmissions.

Combined fuel economy is rated at 6.3L/100km but even with an engine stop-start system, we averaged 7.7L/100km of admittedly hard testing. 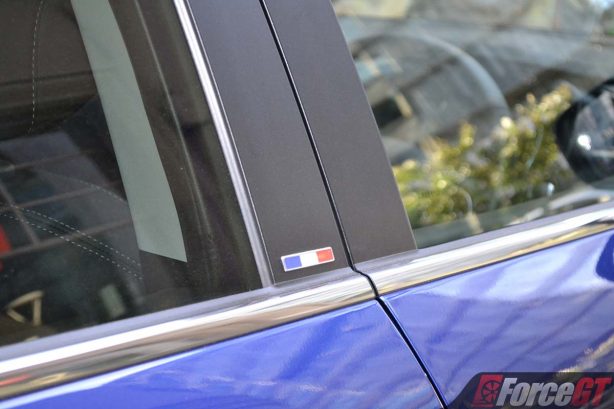 All Kadjar’s in Australia are front-whee drive only, with the diesel/manual all-wheel drive variants not making the cut due to Australians traditional disinterest in manuals.

Like the Qashqai, the Kadjar features front strut suspension, along with a simple torsion beam setup at the rear. Ride and handling are good with decent body control and grip from the 215/60R17 Continental tyres. It’s by no means sporty but it doesn’t proclaim to be, either.

Its steering is light and well suited to city driving but lacks feedback, while there’s good brake pedal feel to prevent abrupt braking.

Interior is refinement is good, too, with good noise suppression, an excellent ride quality around town and an engine stop-start that isn’t too intrusive.

To alleviate misconception about expensive maintenance for the brand, the Kadjar benefits from Renault’s 5:5:5 Easy Life Ownership Program. In a nutshell, it comes with:

The Kadjar also comes with class-leading service intervals of 30,000km or every 12 months, whichever comes first.

The Renault Kadjar deserves a spot on the shopping list for those in the market for a small SUV. It is competitively priced, handsomely styled, generously equipped and comes with a punchy turbocharged engine. It rides well and isn’t as expensive to maintain as some might perceive.