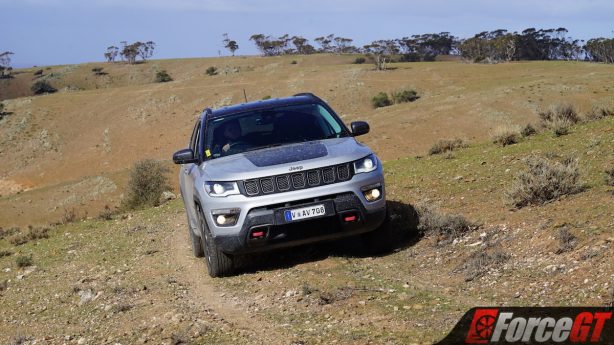 While we’ve already taken a detailed look at the new Jeep Compass Trailhawk, there was only one question I had that needed answering when it was my turn to get behind the wheel – can this thing handle itself off-road?

With most compact SUVs like the Compass having been designed to spend the majority of their lives confined to cities and towns, you’d normally just say that the answer is a big fat no and call it a day.

But this is no ordinary small SUV – this is a Jeep. If there’s one thing a Jeep must be able to do, that’s making it through the rough stuff. Surely even the Compass – which is built around a transverse front-wheel drive platform, with part-time all-wheel drive in this particular configuration – will be able to manage a bit of roughing it, right?

To test the credentials of the Trail Rated badges on the Trailhawk’s quarter panels and to see whether it’s actually worthy of being called a Jeep at all, I took it out past the Barossa Valley – one of Australia’s oldest and best-known wine regions – to find out.

Exercising a few connections, I was able to gain access to some private property that was covered in tracks that would test the Trailhawk’s ground clearance, tractability, and approach and departure angles – some of the most important things to have confidence in when off-roading – as well as to utilise the many off-roading gizmos and gadgets it was loaded up with.

But before it was time for all that, a 120km drive on the road lay ahead, which the Trailhawk was thankfully pleasant enough over. 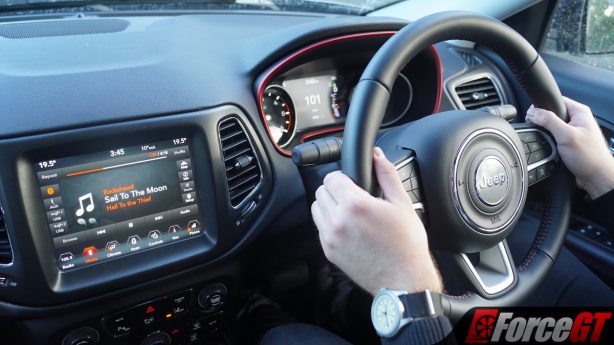 While some vehicles with a bias towards off-road performance can often feel compromised on the road, the Compass Trailhawk’s city-centric basic design was enough to do the trick.

On the road, the ride is acceptably comfortable and the turbo-diesel engine – a 2.0-litre unit making 125kW and 350Nm – keeps to itself without too much engine noise intruding into the cabin.

There was a noticeable amount of wind and road noise at times, but it’s a relatively pleasant affair when you’re on the cruise. 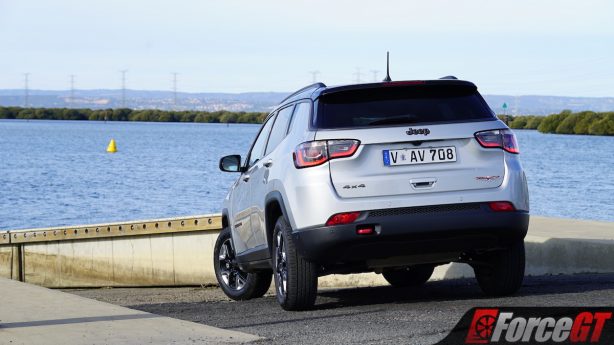 Getting up to speed is a bit of a challenge though, as the Fiat-derived ‘Multijet II’ diesel lump never feels quite as torquey as you’d like it to on the road.

When off-roading though, adequate levels of power are all that you need, and the Trailhawk has just the right amount of low-down torque there, so I wouldn’t worry too much.

When you first hit the typical dirt roads you’ll find anywhere in the Australian countryside, the Trailhawk immediately starts to make a case for itself. The ride quality over rutted and corrugated tracks is very good, and it feels stable at higher speeds and rarely felt like it was going to step out on me despite the loose, dusty surfaces. 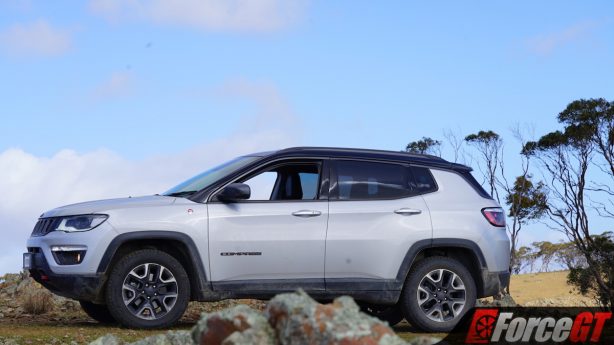 I was particularly surprised at the lack of bumpiness once I hit the rocky tracks I’d headed all the way out there for. Granted, the speeds at this point were a lot lower, but you’d hardly notice the change of surface if it weren’t for the view out of the windows.

The Trailhawk’s first real test came along almost immediately though, with a rocky, pothole-ridden downhill slope.

For this – and the majority of the time spent out in these parts – I kept the Jeep’s Selec-Terrain system that adjusts the throttle response and traction control accordingly in its Auto setting, as its specific setting for rock-crawling and the whole system in general was, quite frankly, overkill for what most sane people would ever do with one of these. 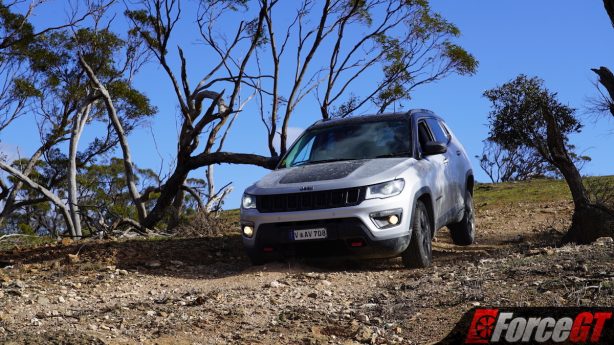 I also kept it in the 4WD Lock mode, which keeps the power distribution at an even 50-50 front-rear split, as well as in the 4WD Low mode.

Despite the naming of these two modes, and the 4×4 badging on the rear hatch, the Trailhawk doesn’t have a true dual-range four-wheel drive system.

Instead, the Trailhawk runs a normally front-biased part-time all-wheel drive system, as previously noted, while the first gear in its nine-speed automatic transmission is at a particularly low ratio and is used exclusively off-road in lieu of a low-range transfer gear. 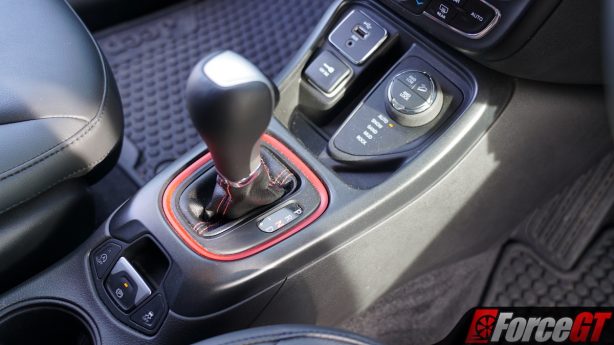 While it seems the motto behind this idea may have been to “fake it ‘til you make it”, it’s hard to deny that it’s a setup that works, as it never once seemed to struggle for traction, and the notably low gearing of its first ratio did feel convincing enough.

With everything configured as such, I flicked on the hill descent control – which managed to hold it at the perfect speed to handle this downhill gradient and the surface of it – and simply let the car do its thing.

The most notable thing learned from this test though was the Trailhawk’s tendency to tripod. With one of the front wheels simply dipped into a pothole, the opposite rear wheel was up in the air, which becomes a bit of a recurring theme. 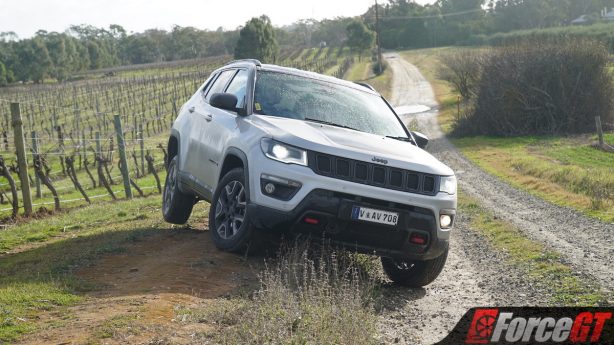 While it may have good ride comfort, there’s a surprising lack of articulation to the rear suspension, with this and the Compass’ short wheelbase causing it to constantly get up on three wheels. Other than that, it didn’t feel out of its element at all so far.

Next up at the bottom of the hill just descended was a dip that lay immediately before an opposing uphill stretch – a perfect place to test the adequacy of the Trailhawk’s approach angle. 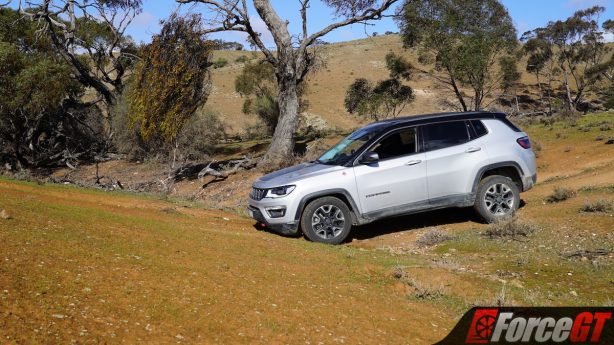 Despite the noticeably upturned shape of the front bumper, I was a tad worried about how it would clear this, and looking back over the photos, my initial concern was justified as it was incredibly close.

However, the good news was that no damage was inflicted on the it as the contour of the slope was seemingly tailored to its front bar which has been designed to create an impressive approach angle of 30.3 degrees. 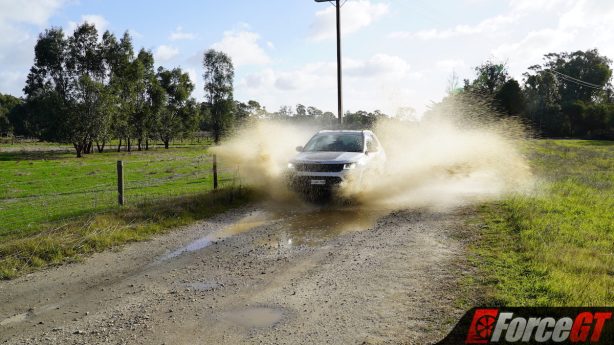 After this, we also had a couple of chances to put it through some shallow water and some muddy ruts. The two biggest takeaways from this were that its 225mm ground clearance is particularly good for an SUV like this – particularly compared to the mere 186mm ground clearance of the Compass’ Sport and Longitude variants, and the 212mm of the Limited model – and that there were no detectable tractability issues with the all-wheel drive system configured properly.

The excellent ground clearance in particular made itself useful on the rocky trails that formed the majority of what we spent our time driving over though, whether it was due to larger rocks sticking up in the middle of a track, or for the many bushes that littered the less-travelled paths on this stunning property. 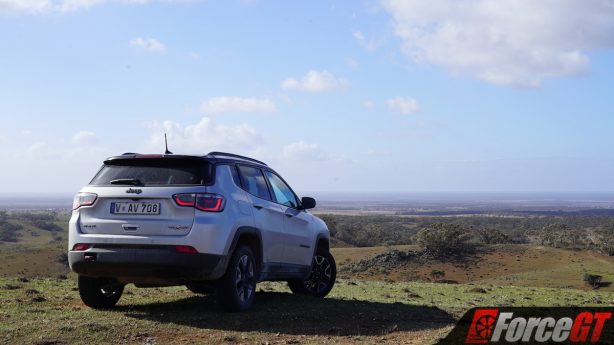 Equipment and Features for Off-Road Use: 8.0/10

While you’d think that someone would be mad to take a vehicle such as the Compass somewhere like this, the fact of the matter is that you absolutely can.

While the Trail Rated badges, the Trailhawk name, the rugged bodywork, and the various off-roading accoutrements might look like a gimmick on the surface, it really can handle being put through its paces in this sort of off-road environment.

While I wouldn’t go taking one of these rock-crawling or on some sort of Burke and Wills-style adventure, it’s plenty capable for someone looking to have a bit of fun getting to a good camping site or the like, which is apt because the type of people who would be into that sort of thing are exactly who this is aimed at.

For our full thoughts on the Jeep Compass Trailhawk, you can read our initial review by clicking here.

Well, it’s finally upon us – the plucky little Suzuki Jimny has entered just its …