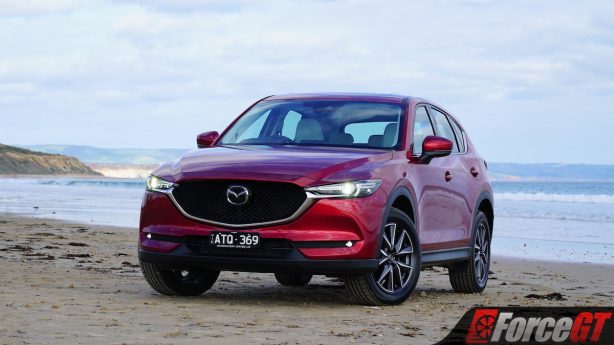 The Mazda CX-5 might have only been with us in its current incarnation for one year, but Mazda has already seen it fit to give it a bit of a spruce up for 2018.

These updates are nothing you’ll notice on the surface though – a facelift, this is not – because it’s the oily bits that have seen the attention of Mazda’s engineers this time around.

There are updates across the board for all three engine options, although some see bigger upgrades than others.

The least fettled with is the entry-level 2.0-litre petrol, which sees an undetectable 1kW power bump, taking it to 115kW.

Similarly, the larger 2.5-litre petrol sees an almost pointless 1Nm torque increase – elevating it to 252Nm – but it also sees the introduction of cylinder deactivation tech to reduce fuel consumption.

But it’s the CX-5’s diesel engine that sees the most notable improvements. Fittingly, that’s what we have on test here – a diesel-equipped model in top-spec Akera trim. 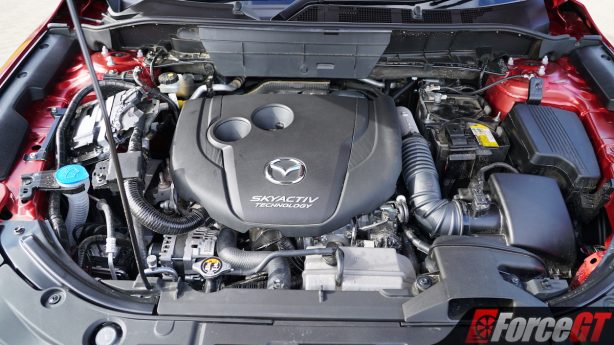 The 2.2-litre four-cylinder diesel has received a major overhaul, with a revised combustion chamber and fuel injectors, a new two-stage twin-turbo system with Variable Geometry on the larger turbocharger, a higher compression ratio, and the addition of dynamic dampers in each piston pin.

It’s all very nerdy stuff – clearly, Mazda’s engineers have had a field day with this thing – that’s all a bit hard to digest in list form. Simply put, the aim was to make the revised engine more powerful and less noisy, and the results speak for themselves.

It’s hard to deny that the diesel is almost whisper quiet except at full chat, and even then there’s a lack of the expected diesel clatter, with it making a more brawny and muscular burble instead. 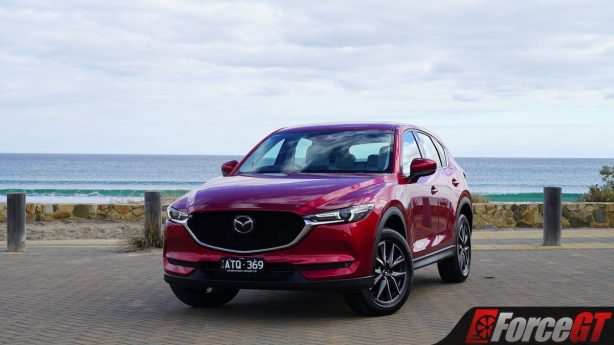 The refinement of the diesel engine is truly BMW-like, which is the highest compliment I can give it. It’s easy to forget that something as vile as diesel is coursing through its veins, and that’s exactly what you want.

It’s appreciably economical too, which is the least you’d expect from a diesel. Claimed fuel consumption is down three-tenths to 5.7L/100km, and we saw an indicated 7.0L/100km over the course of a week with the car.

The power hike is, of course, the next thing you’ll notice, as the CX-5 pulls itself up to speed pretty effortlessly. It does feel out of puff a touch when at higher speeds, but in the traffic light grand prix you’ll be leaving others in your wake.

All diesel-equipped models still come with a six-speed torque converter auto as standard – which feels perfectly matched to the engine, keeping it nicely in the power band despite only offering six ratios in a world of eight-speeds – along with all-wheel drive.

I would like to see the excellent turbocharged 2.5-litre petrol from the CX-9 – that has also recently found its way into the Mazda6 – ending up under the bonnet of the CX-5, and there is some likelihood of that happening in the future, but the diesel does make for a fine flagship engine in the meantime. 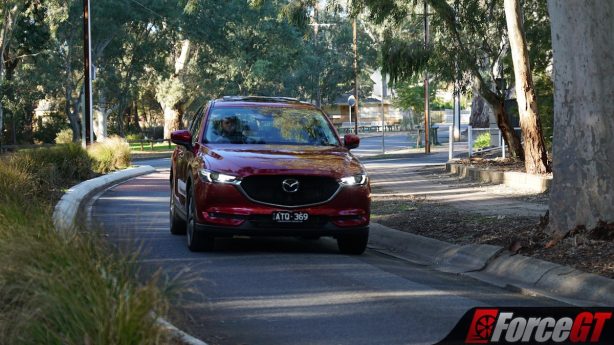 Other than the additional power, little else is different about how the CX-5 drives. It remains one of the best handling cars in the segment, with very little body-roll and well-weighted steering at higher speeds.

The electric power steering may feel a bit too light at low speeds for some tastes, but it does weight-up significantly above 60km/h with it feeling quick and precise, allowing you to really put the car where you want it.

The suspension is particularly well-tuned though, with it calibrated to be firm enough to keep the car feeling taut and planted while still ironing out all but the very worst of bumps.

There’s little to say about the interior and exterior of the CX-5 that hasn’t been said before as well, as both go almost entirely untouched. 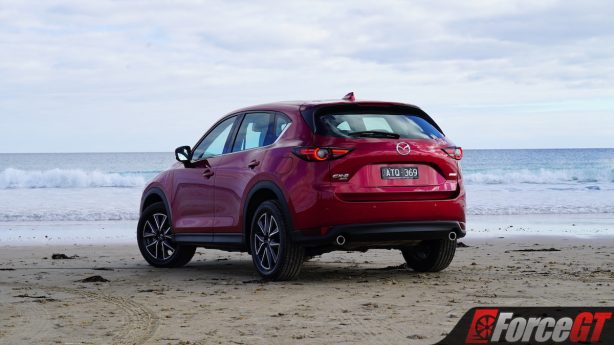 You’ll find next to no way of telling this updated version apart from a 2017 model on the surface though, with the only hint being the additional cameras for the 360-degree view monitor, a feature unique to Akera models, which is the only real addition you’ll notice on the inside as well.

In my opinion, it’s a good thing Mazda haven’t fiddled with the look of anything because when the current CX-5 launched last year it was already spot on in my opinion.

The exterior of the car is bold but not over-the-top, and it looks particularly good in the Soul Red Crystal Metallic of our test car, but it’s the interior that continues to impress the most. 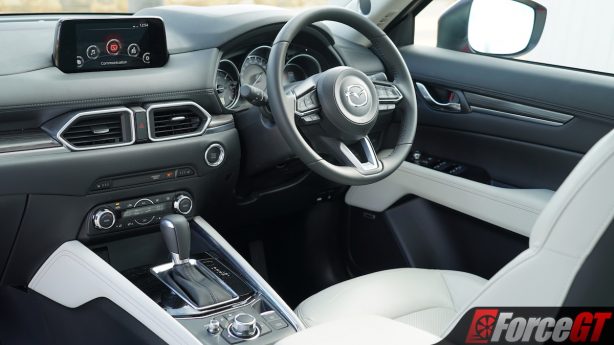 In terms of the interior layout, the CX-5’s cabin continues to be a terrific place to sit when eating up the miles. Everything is well laid-out, the switchgear feels solid, the displays are crystal clear, and the seats and armrests are well-padded and, naturally, very comfortable on long drives.

Not only are all the materials of an excellent quality, including even the plastics, but the optional white leather interior (also available on GT models) looks truly stunning and incredibly classy. Granted, white leather is a pretty questionable idea when you consider how dirty it’s likely to get, but it is at least a very nice touch right now while it’s all still fresh. 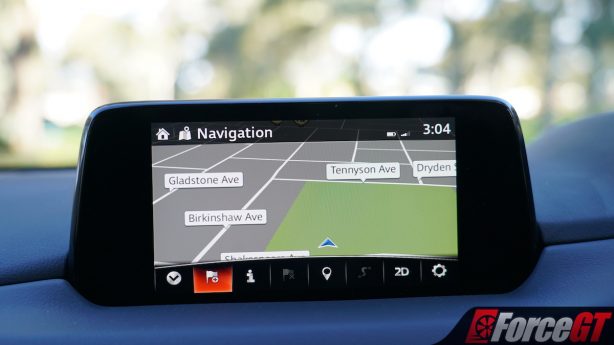 If there was anything I’d change, I would prefer the larger infotainment screen from the CX-9 – although it’s worth noting both the smaller and larger versions of the MZD Connect system lack Apple CarPlay and Android Auto – and a full panoramic sunroof in place of the little porthole one currently used would also be a nice addition, but with both of those being particularly nit-picky complaints it’s safe to say Mazda are on the money with the interior as is.

It’s also worth noting that prices have been cut between $400-800 across the top four trim levels, with an $800 discount seeing the cost of this range-topping Akera now down to $49,190 before options. Only the entry-level Maxx misses out on having its prices dropped, although the vast majority of buyers are expected to opt for the top three trim-levels anyway. 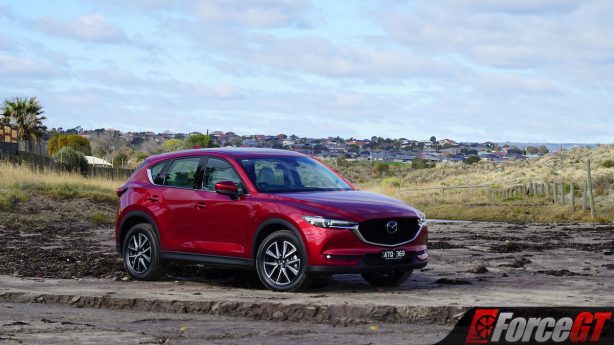 While not much has changed on the surface of the 2018 Mazda CX-5, the mere 15 per cent of people expected to opt for the diesel will find themselves being pleasantly surprised by the revised oiler under the bonnet.

We’ll continue to eagerly await a version of the CX-5 featuring the 2.5-litre turbo petrol, but for now, the 2.2-litre diesel is the new engine of choice.

But regardless of what’s under the bonnet, the CX-5 remains one of the segment’s highlights, offering a premium-feeling cabin and a stylish exterior, and a driving experience that also stands out.

It could do with a larger infotainment screen and a panoramic sunroof to make it feel like even more of a truly premium offering, and it should really have a longer warranty and longer service intervals too, but overall, the CX-5 is a car that is very hard to complain about, with it continuing to impress more and more with every revision Mazda gives us.