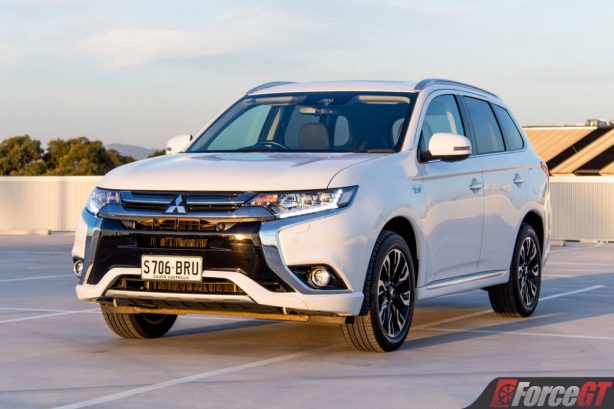 Technology can be a double edged sword that rusts over with the passage of time. What used to be a must have feature becomes one to avoid the moment a better alternative comes along. Now half way into its model life, the Mitsubishi Outlander PHEV we are reviewing has a serious challenge to overcome with buyers, can the four-year-old battery tech that underpins its drivetrain win potential buyers over and keep them interested for the next several years? 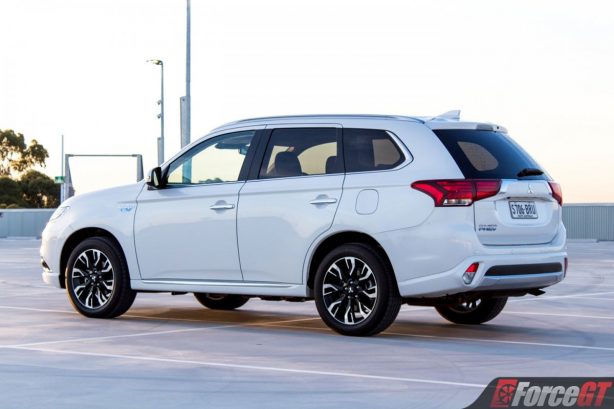 The short answer is that the Outlander PHEV isn’t for everyone, those that rack up over 50km of travel during their daily commute won’t see much benefit from the 54km electric only range. The 12KWh battery pack and dual 60kW electric motors work in tandem with the 87kW 2.0-litre petrol engine to, in theory, give you incredible fuel efficiency. And to an extent that’s completely true, a full charge and relaxed acceleration gives you roughly 50km of suburban driving before needing to wake up the petrol engine.

Unlike conventional cars the Outlander PHEV becomes even more fuel efficient in start stop traffic thanks to the regenerative braking system that recovers kinetic energy back into the batteries. In fact, a friend of mine owns one and with his daily 10km commute to and from work can get by on filling up the tank just 4 times a year.

Given that the Outlander was designed for the urban arena I decided to take it out of its comfort zone with a 300km round trip up the Hume Highway. This is close to the worst scenario for fuel economy the Outlander was engineered to tackle and I’m glad to report that it still managed a solid 6.7L/100km. That’s better than the equivalent petrol model and on par with the diesel too. Of course if you keep the Outlander PHEV charged up and in its natural habitat you can cruise around on just battery power alone. 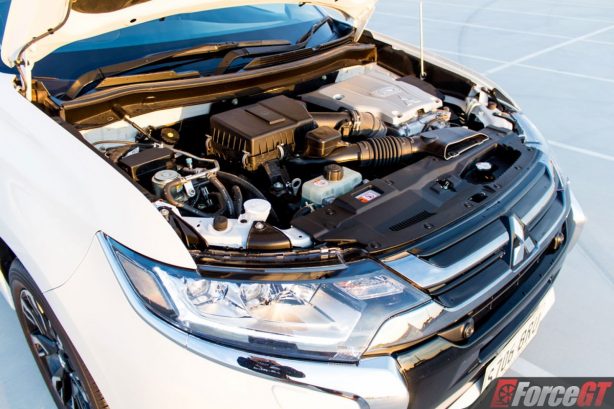 Under electric power the Outlander PHEV is a smooth and quiet ride. The cabin is better insulated from external noise than before and the electric motors can’t be beaten for their silky smooth operation. Acceleration isn’t rapid by any means, there is enough power to chug about and the up front torquey delivery of power keeps things driveable.

Once the battery is drained and you’ve stowed it away for the night you’ll be able to charge up the Outlander PHEV directly from an ordinary power outlet using the included type 1 charging cable. For those in a rush the new DC fast charge socket can pump up the batteries to 80% capacity in 25 minutes where as the standard cable will take at least 5 hours to reach a full charge.

On the go, paddles located behind the wheel don’t shift gears but allow you to set how strongly the regenerative braking kicks in which is great for coasting down hills as it feels just like engine braking with the benefit of building up charge in the battery. 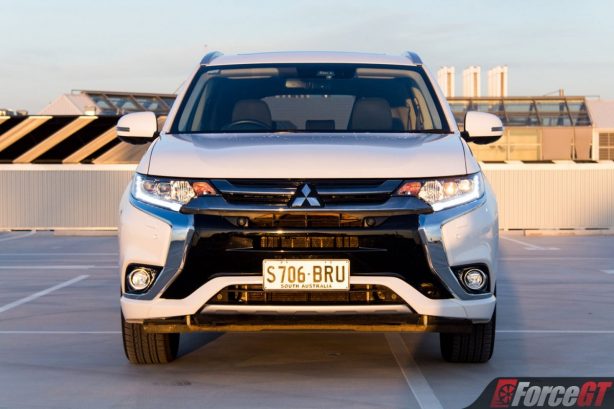 With the extra motors and battery pack the Outlander PHEV is a heavy car tipping the scales at 1,860kg so it’s not the most nimble through the bends with noticeable body roll. The S-AWC (Super All Wheel Control) system works its magic to improve the handling but no amount of electronic trickery can break the laws of physics. In order to keep all that weight under control Mitsubishi have had to give the Outlander PHEV a firm ride so you’ll have to wash off more speed than usual over your local speed bumps.

For a large SUV you’d expect an equally large turning circle however the Outlander PHEV manages agile carpark manoeuvring thanks to its 10.6m kerb to kerb turning radius. 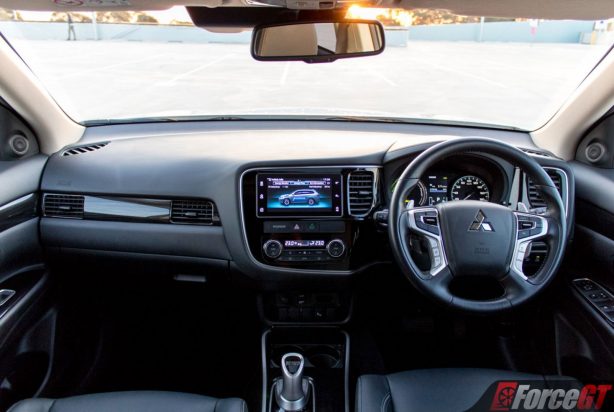 Looks alone won’t be enough to draw you in but thankfully the 2018 Outlander does look better than the average SUV in the styling department.

Up front things look suitably modern with sharp angles from the “Dynamic Shield” front grille that makes the most of Mitsubishi’s current design language. Relatively short overhangs front and rear and the ample ground clearance give the Outlander real off-roading credentials that most soft-roader SUV’s could only dream of.

We were lucky enough to nab the fully loaded Exceed model with its plush leather interior and swathe array of creature comforts. There’s still a few hard plastic surfaces dotted around the place but overall the Outlander’s a nice place to get around in. 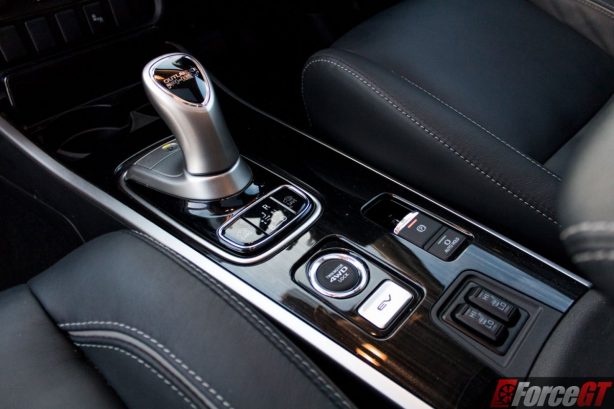 For the most part build quality was well executed though I did find that the driver’s seat wasn’t as sturdy as it could have been with a hint of play from the reclining mechanism. Ample room is provided both front and rear except for the boot which loses some capacity to the battery packs. That said, it’s still a respectable 463L that expands once you drop the 60/40 split rear seats.

The only complaints coming from the rear will be from the lack of air vents or charging ports for passengers, oddly enough there is a 12v charging port in the boot along with a set of cup holders (because the non-electric Outlander is available as a 7 seater). 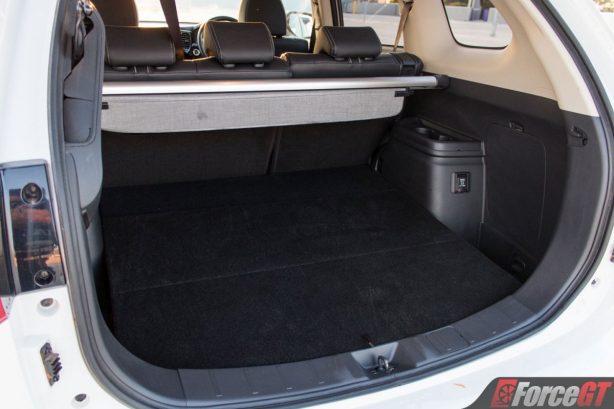 As the flagship model the Exceed is packed to the brim with the full suite of features. The 6-speaker stereo system sounds impressive, and with DAB+ digital radio for extra audio clarity it offers Android Auto and Apple CarPlay integration, too.

The only feature list oddity is the omission of a built-in satellite navigation system which has no reason not to be included. 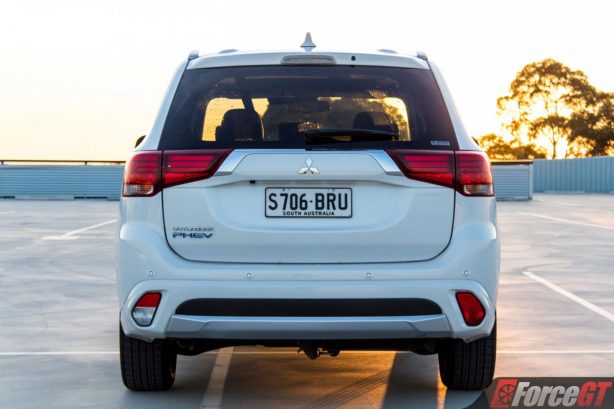 From a purely economic point of view the Mitsubishi Outlander PHEV makes sense if your daily drive isn’t going to push past 50km. If that’s the case then you’ll be able to enjoy a highly specced up mid sized SUV with half of silicon valley stuffed under its skin. But if you frequently travel lengthy trips the liquefied dinosaur fuelled iterations become a more financially sensible choice.

Previous 2019 Ford Everest gains 2.0L BiTurbo diesel with 500Nm
Next Pure-electric BMW iNEXT due in 2021 to be ‘i’ brand flagship

Mitsubishi has given its Pajero Sport an update for MY2020, bringing improved features as well …