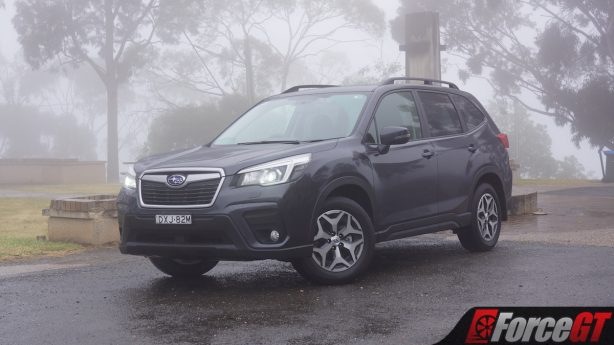 The 2019 Subaru Forester is an incredibly important car for its maker as the once niche vehicle based on the Impreza’s underpinnings has grown – both figuratively and quite literally – into a larger offering that now competes in an unbelievably crowded market space.

While the first-generation model was surprisingly competent off-road, with it even offering a proper dual-range transfer box on some variants, the modern-day Foz, now in its fifth-generation, has ditched the rugged underpinnings and plastic lower body cladding in favour of a more road-going-focussed design. 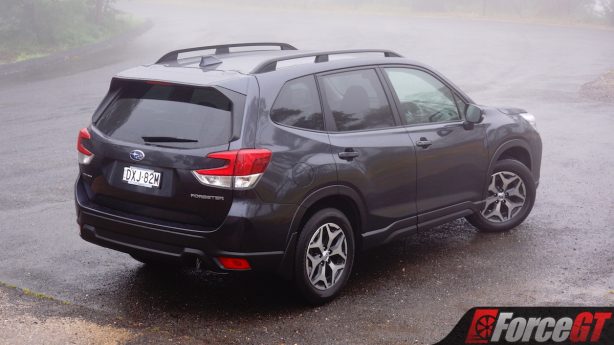 From the front, the fifth-generation Forester doesn’t look that drastically different than the model it replaces, and while the side certainly sports a few different character lines, it’s also pretty similar too.

Only the rear with its new C-shaped taillights really sets the new model apart from a distance, but that’s certainly not a bad thing as while it is a pretty safe design, it’s certainly not unattractive. It looks pretty smart in the Dark Grey Metallic of our tester, although picking something more vibrant does bring out the best of the design.

The base model tested here and the 2.5i-L that sits above it both sport the same 17-inch alloys, while the top two trim levels sport different 18s. The chunky look of these wheels is something that suits the style of the Forester well, although the closed-in design does have somewhat of an effect on brake cooling. When driven hard, you’ll notice the difference just from the smell of the brakes alone driven back-to-back with models fitted with larger wheels; although this is something that won’t be of any real concern to the vast majority of buyers.

Worth noting for the few who will venture out onto easy off-road trails, the Forester’s front and rear overhangs are nice and short to minimise the risk of any damage, and we certainly never had any issues there during our testing.

Also on the outside, it sports roof rails as standard that, speaking from experience, make fitting a set of roof racks far easier. There’s also a set of active cornering LED headlights at the front as well – a feature not often seen on base model cars – although the fog lights are just cheaper halogens, rather than also being LED units like on pricier models. 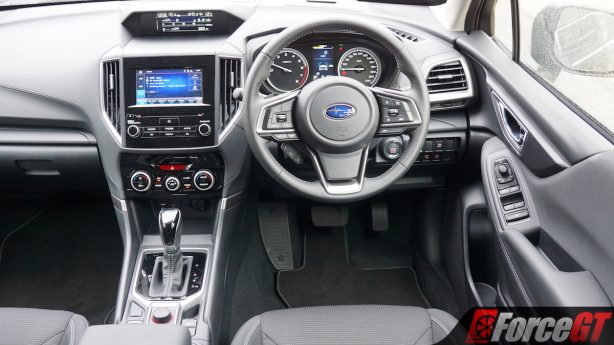 On the inside, the Forester is brought up to the times with an interior that reflects the latest generation of Subaru models, with a classier but still button-laden steering wheel, a sleeker and more angular dashboard design, and the latest Starlink infotainment system across the two screens on the dashboard and one in the gauge cluster.

The interior is very well-laid out and spacious, with a large centre console and big door bins. There’s plenty of leg and headroom in both the first and second row and appreciably padded armrests all around, although rear seat occupants did note that the rear pew is a bit firmer than the front seats that had more give to them. All models sport cloth upholstery other than the range topping 2.5i-S which gets leather seats. 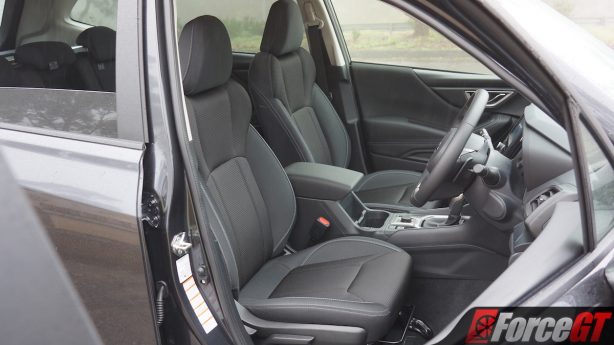 There’s also a big boot that’ll easily accomodate all your gear for a weekend away, and even more so with the rear seats folded down which reveals a truly massive space to allow for larger items like, say, a couple of mountain bikes.

Fit and finish throughout the cabin is all typical Subaru, so as to say it feels solid and tactile with not a single rattle to be detected. The quality of all the materials is good too, with all the switchgear feeling solid and regular contact points such as the steering wheel and armrests clad in premium-feeling leather. 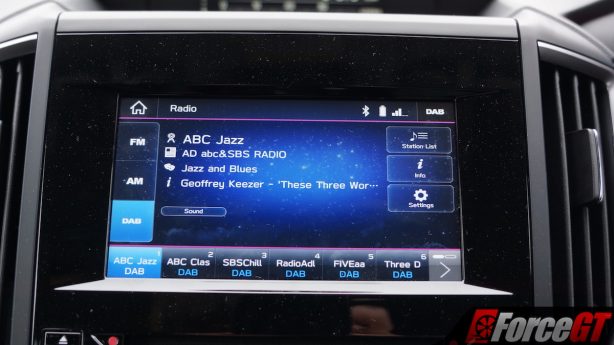 The only thing that really lets this interior down is the tiny 6.5-inch infotainment screen that comes in the bottom two trim levels. Not only does it look rather lost on the dashboard which was clearly designed with the larger 8.5-inch screen in mind, it’s also more difficult to use at times as all the icons and text has been designed with the larger unit in mind. There’s also no integrated satellite navigation, although it does offer Apple CarPlay and Android Auto connectivity to make up for that.

It does, at least, offer plenty of safety equipment to make up for it, with the EyeSight Assist Monitor, Lane Change Assist, Blind Spot Monitoring, and Rear Cross Traffic Alert, although it does miss out on the Driver Monitoring System of higher-spec models. 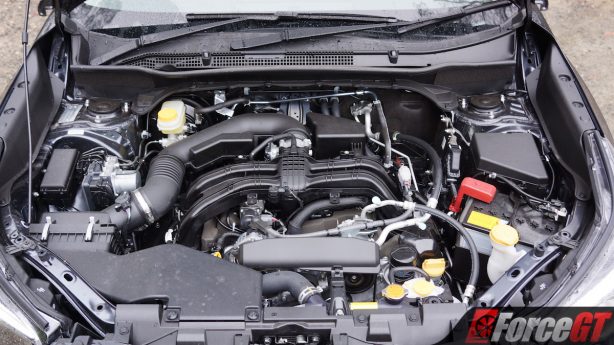 Under the bonnet of all Foresters lies a version of the FB25 engine – a 2.5-litre naturally aspirated flat-four – that Subaru claims is “90 per cent new.” Certainly, it now sports direct injection, rather than dated multi-point injection as found in the Liberty and Outback, and a host of other minor changes that helps bump power up to 136kW and 239Nm.

While those outputs are relatively healthy for an engine of this size, it isn’t actually that drastic a jump with it up just 10kW and 4Nm from the outgoing Forester. It is an engine that feels more refined than before, however, and it sounds better too.

Backing this engine is a CVT with a seven-speed manual mode controlled by some great-feeling paddle shifters on the back of the steering wheel. Power is channelled to all four wheels through Subaru’s trademark Symmetrical All-Wheel Drive system.

The Forester is the latest model in Subaru’s lineup to be based upon the new, scalable Subaru Global Platform first debuted in the latest Impreza. The new platform means that previous turbo petrol and diesel variants of the Forester have now been dropped, although it does also mean that you’re now buying a safer car that’s nicer to drive. 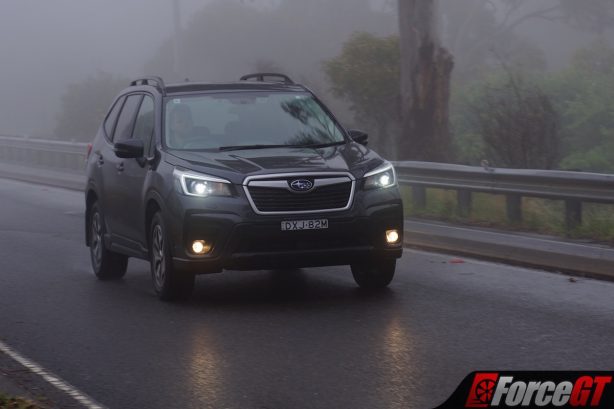 With quick steering, double-wishbone suspension in the rear, and a low centre of gravity due to its horizontally-opposed boxer engine, the Forester handles very well for a high-riding mid-size SUV, even with the softer sidewalls of the tyres fitted to the smaller 17-inch wheels of our base model tester.

Through the corners, there’s no more than an acceptable amount of body roll as it holds its line firmly, before you’re then able to get onto the power early on the exit thanks to the excellent power delivery through its fantastic all-wheel drive system.

It also rides incredibly comfortably thanks to the fancy suspension and chubbier tyres, meaning it can cope with the pathetic excuses for roads that we have here in Australia, simply ironing out speed bumps and potholes as if they weren’t there. This translates well to off-road applications too, as it makes gravel roads feel as though they were tarmac, especially as there’s next-to-no hunting for traction on loose surfaces either. 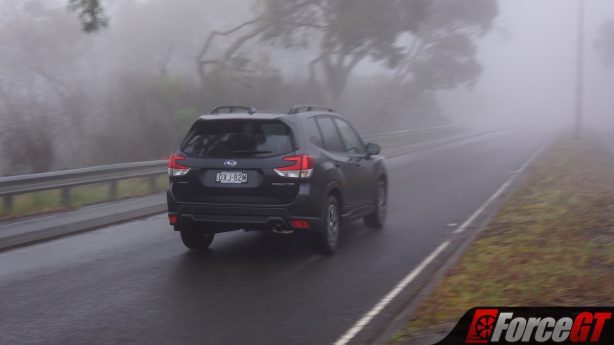 The only downside to the driving experience is the CVT, despite the fact it’s about the best CVT you’ll find out there. When left to its own devices, its well-mannered and does its best job of pretending to be a conventional automatic, but when you flick it into manual and use the steering wheel-mounted paddle shifters to select from seven pre-set ratios, it’s a real let-down.

While both upshifts and downshifts are appreciably quick, the seven ratios on offer are simply too tall to extract any real performance from the naturally aspirated engine which hides all its power up near the redline. When you can eventually wind it up to that point, it does pull nicely, but it runs out of steam too quickly and it’s such hard work to get it there in the first place that it doesn’t make it rewarding.

The 2.5-litre flat-four does at least make a decent noise under load, while remaining quiet and in the background around town and on the open road. It’s decently economical too, using 9.3L/100km over the course of 680km of mixed driving. Keep in mind, however, that our tester was still early in the break-in period during our time with it, and you should see that number drop once there’s a thousand kays or so more on the clock. 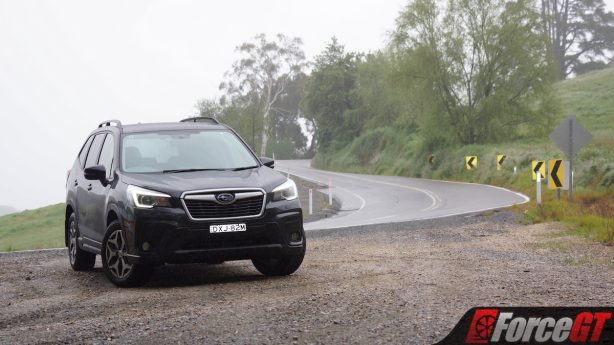 Even as a base model, the latest Forester manages to impress as a well-equipped and well-rounded package. It’s good on the road and off it, it’s comfortable and practical, it’s understated but still stylish, and it’s sure to keep you safe.

It might not be the most thrilling thing to drive, especially now that there’s no performance-focused variant, and it may be missing some niceties in entry-level trim, but ultimately, there’s little to complain about.

With a few of the extra unique features not seen on the model tested here, the Forester is sure to impress SUV buyers looking for something a bit more gadgety, but the 2.5i positions itself as a solid option for those looking for an unpretentious do-everything car.