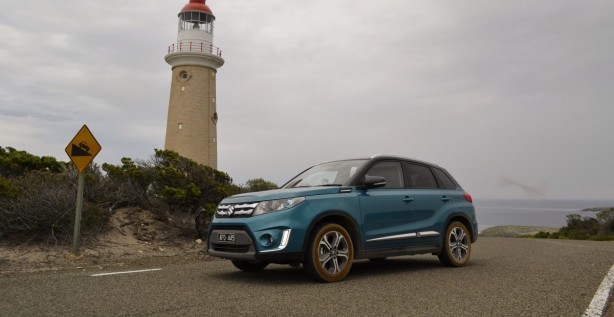 With two of my siblings and parents all living in different cities, the family try and get together at least once a year in case we forget each other’s face.

This year, we decided to spend a couple of nights at one of the must visit places in South Australia – the idyllic Kangaroo Island.

With accommodation sorted and ferry booked, it was time to organise a car for the trip. With its immense distances (Kangaroo Island – or KI – is 155km long from east to west and between 90km and 57km wide) and occasionally rugged unsealed roads, what perfect candidate than the latest Kia Sorento.

It’s got an equally immense interior, all-wheel drive and a muscular diesel engine.

I wasted no time in dispatching an email to the lovely PR people at Kia Australia to book in the high-riding family wagon, and got a confirmation that it’s all locked in. Perfect. Or so I thought.

Two months later and two days before the date of departure, came a call from Alicia advising the Sorento had been damaged and my booking would need to be rescheduled!

Hmm, what to do now?

I really wanted a large all-wheel drive capable of swallowing the luggage for five adults and still have plenty of rooms for the occupants. 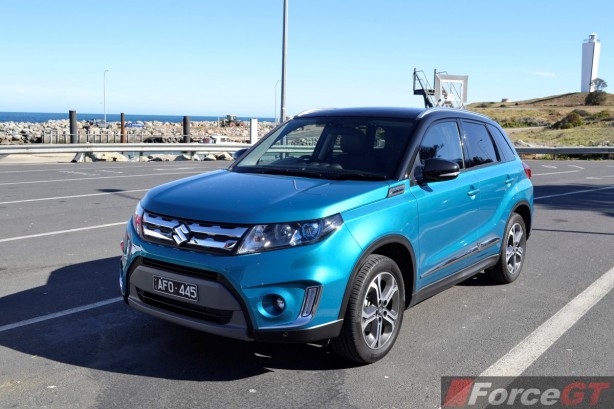 Happily, Suzuki Australia came to the rescue and lend us their fresh off the boat all-new 2015 Vitara.

When I pulled up on the driveway in the range-topping Atlantis Turquoise Vitara RT-X, the family stood around it and looked at each other questioningly.

“It’s quite small, isn’t it?” said my observant Father.

“Seems to be smaller than the Hyundai Tucson you had last week,” he offered.

“Will it be able to carry all our luggage?” asked my sister worryingly. 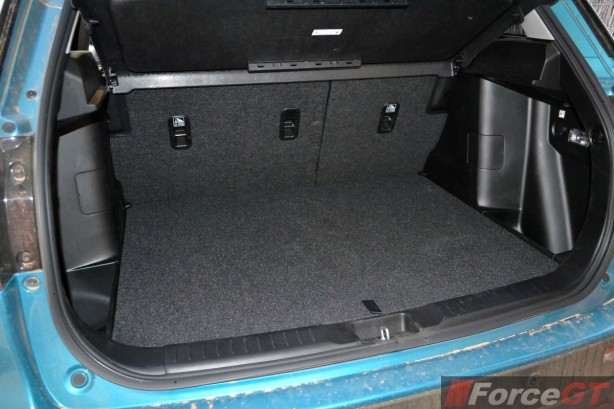 The next day, we woke up bright and early to load the car up. To our surprise, not only did the 375 litre boot took in all our luggage, but also the Nespresso coffee machine, two bags of supermarket shopping and our camera! suzu

Inside, there’s large storage bins in the doors for water bottles, although the glove box is on the small side.

Kangaroo Island is the third largest island in Australia after Tasmania and Melville Island. It is well known for its diverse wildlife and magnificent rugged landscape. 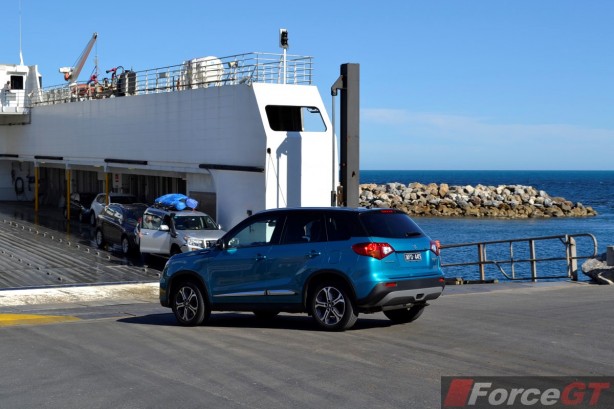 Located 112km southwest of Adelaide and separated from the mainland by the Backstair Passage, the only way of getting onto the island by car is on a ferry, which departs from Cape Jervis in the Fleurieu Peninsula – around 2 hours drive from Adelaide.

From there, the ferry takes around 45 minutes to reach Penneshaw on Kangaroo Island.

With five adults and a boot full of luggage, the Vitara’s first weakness rears its ugly head. Its 1.6-litre naturally aspirated four-cylinder engine, delivering a meager 86kW at 6,000rpm and 156Nm of torque at 4,400rpm, struggles along the rolling hills around Sellicks Hill. Engaging “Sport” mode alleviates the problem – to a certain degree – as it keeps the engine at its power band, but the trade off is a noisier cabin.

It’s six-speed automatic is smooth but it’s shame the 5-speed manual is restricted to the front-wheel drive RT-S base model, as it harnesses power much better than the self-shifter. 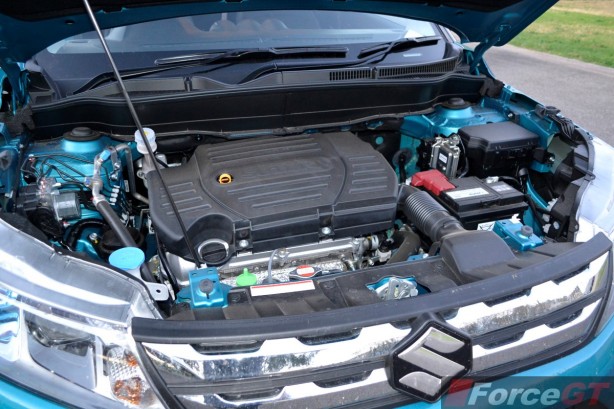 The SeaLink ferry services Kangaroo Island up to 12 times a day. Its vessels are modern and quiet, with air-conditioned lounges and a small licensed café on board. There are also viewing decks to take in the wonderful views.

While Penneshaw ferry terminal is only about 15km from Cape Jervis, the waters in the Backstair Passage can get quite choppy, especially in winter. But on this beautiful spring morning, it was calm with mild headwind, which made for a rather uneventful crossing.

There are a few townships on the island, the biggest being Kingscote – a 45 minutes drive from Penneshaw – and where we are staying for a couple of nights. 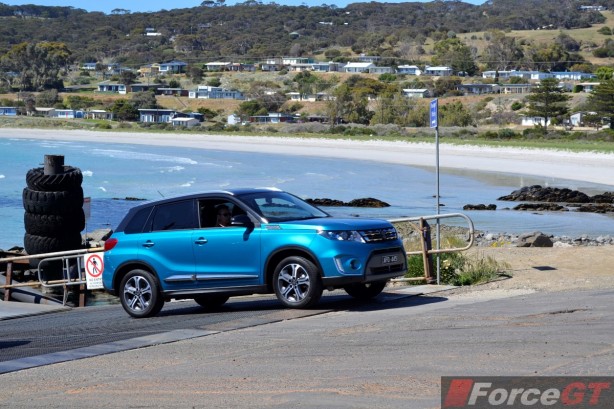 With a lighter load after dropping off the luggage, the Vitara immediately feels livelier. Suzuki says the Vitara was made to drive like the Swift Sport, and it’s not as far off as you might think. The petrol engine loves a rev, and while the extra weight and higher centre of gravity means it doesn’t change direction as swiftly and rolls a little more, it sticks to the road zealously.

After lunch, we stopped at the Emu Bay Lavender Farm where all sorts of unexpected products are made from lavender; from hand cream to sleep balm. There are ten different varieties of lavender on the 1-hectare farm.

The Vitara’s standard 7-inch touchscreen with satellite navigation is one of the best we have tested. Yes, its graphics isn’t as specky as some others, but the voice control works brilliantly. It guides us to various places on the island efficiently, along with crisp instruction. We also love its “point of interest” function that shows us interesting places around us. 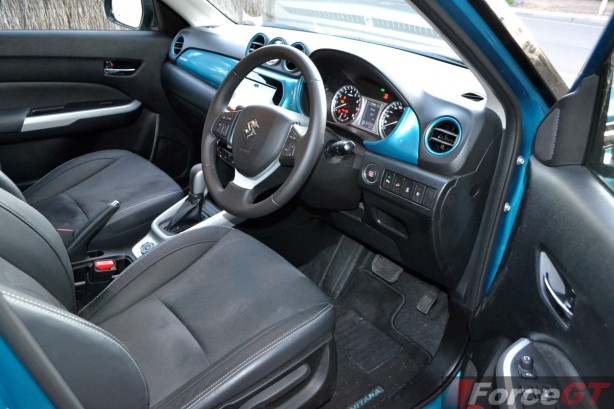 The next morning, we drove 50 minutes on South Coast Road towards the famous Seal Bay Conservation Park, where you can get up close and personal with the third largest Australian sea lion colony.

The large sandy beach and dune area is home to a large breeding colony of sea lions. The family is usually made up of a ginormous alpha male, a couple of smaller females and a few pups. As there are plenty of shrubs in the dunes, it’s the perfect spots for the pups to shelter while mum and dad head into the sea to hunt for food. We were told they could be gone for up to three days in a row, leaving the pups to fend for themselves.

Nearby, there’s also a skeleton of a beached whale. It’s almost like walking onto the set of a wildlife documentary by David Attenborough!

You could spend half a day here, but we decided to move on to the next destination on our itinerary – Kelly Hill Conservation Park.

It is located 90km south west of Kingscote, and about 40km from Seal bay. We piled back into the Vitara and onto South Coast Road once more.

The park is famous for its beautiful limestone caves filled with wonderful formations. The guided tour – which takes about an hour – takes you deep into the hidden world of the cave, decorated with opulent limestone columns, stalactites and stalagmites. 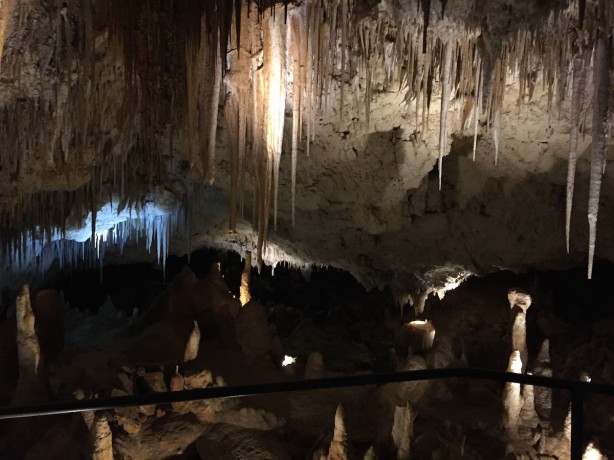 Inside the cave, which is about 4 to 5 storeys underground, the mesmerising light effects and calm serenity seemed to magically teleport you to another world!

While the Vitara doesn’t have the calming effects of the cave, its refinement in town and at motoring speed is appreciatively decent.

After what seemed like a ‘yoga’ session in the cave, we headed for Andermel Marron farm for lunch.

It is located roughly in the middle of Kangaroo Island and the only way to the farm is via 14km of corrugated dirt road. I flicked the dial on the centre console to lock the transmission in all-wheel drive mode and headed down what seemed like an endless highway of red earth. 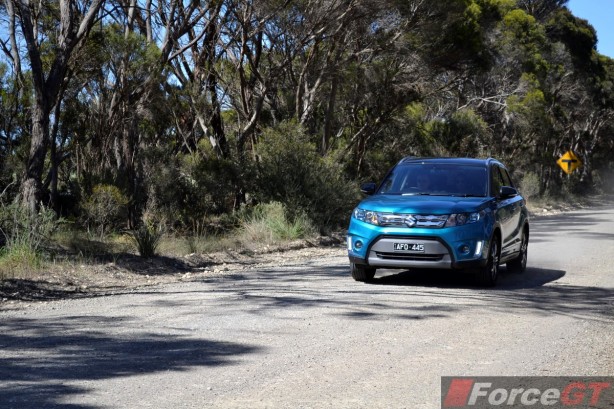 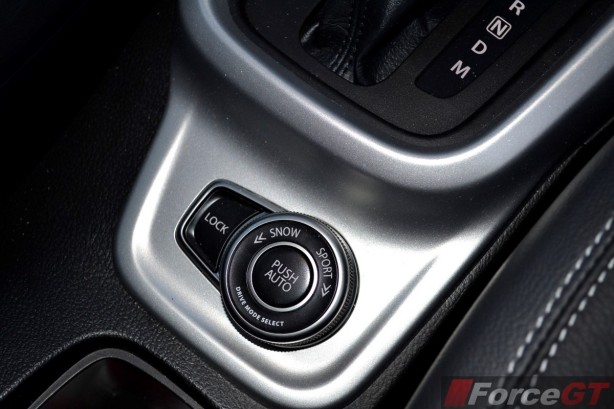 The Vitara took to the task with ease, providing good grip and stability. The suspension worked over time to soak up the ruts, and while it was no magic carpet ride, it wasn’t uncomfortable either.

Marron is the island’s iconic freshwater crayfish that looks like a small black lobster. It was introduced to the creeks of KI from Western Australia, where they are indigenous. They were subsequently farmed by a few growers and Andermel is one of the largest. Visitors to the farm can see the creatures in the holding shed with their life cycle. At the Marron Café, we sat down to a meal of delicious Marron pasta.

With our tummy filled, we went back onto the road and drove west towards Flinders Chase National Park – roughly an hour’s drive. 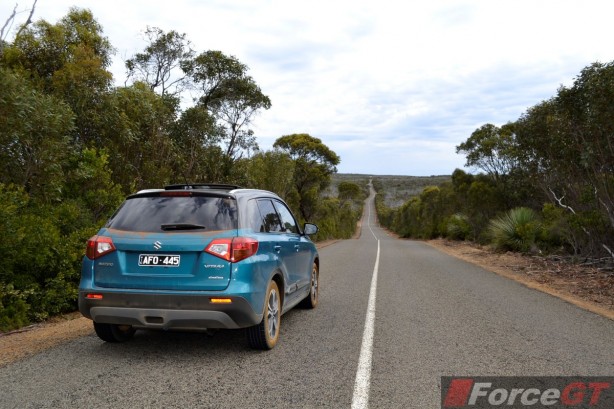 Impressively, the Vitara’s engaging handling makes it well suited for long country drive, where is relatively light steering offers plenty of feel. It turns into corners with surprisingly eagerness and body movement is well contained despite the car’s tall stance.

It is relatively comfortable, too, as all three rear occupants dosed off almost immediately! 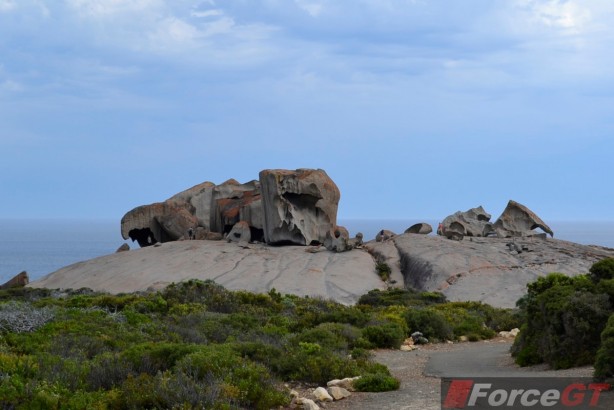 Located in the southern part of the park, Remarkable Rocks are Mother Nature’s handy work at its best. The naturally sculpted formations are balanced precariously atop of a granite outcrop overlooking the Indian Ocean and makes for spectacular a sight.

The rocks are nearly 3 or 4 storeys high and are continuing to evolve due the relentless wind and rain.

After a few obligatory photos, we jumped back into the car for Admiral’s Arch. We are not sure why it was called the Admiral’s Arch but its stunning postcard view of the coastline is a must see destination. 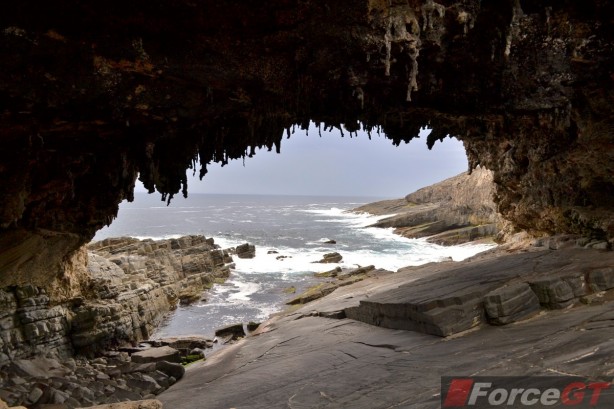 Closeby, the relatively protected waters are home to large colonies of New Zealand fur seals. Their dark skin blends perfectly with the surrounding landscape making this a good spot to play “spot the fur seals”.

As visitors are required to leave the park before sunset, we made out way out and back onto South Coast Road. The monotonous journey back to Kingscote takes around 1.5 hours. The only excitement along the way was a few wayward kangaroos that decided to tempt faith and jumped out in front of us.

Thankfully, the Vitara’s effective ABS and Electronic Stability Control system mitigated a potential close encounter of the ugly kind with our national emblem.

As we got ready to head back to Adelaide the next morning, the low fuel warning lamp lit up. During our 3-day trip, we averaged 7.2L/100km of unleaded fuel.

The 2015 Suzuki Vitara not only surprised us with its practicality and drivability, its accomplished and entertaining chassis makes it a delight to take on road trips.

While it has lost its forebear’s rugged looks and 4WD capability, what the new model brings is comfort, generous equipment and a modern design.

What lets the new Suzuki down is its underpowered petrol engine and the lack of manual in the all-wheel drive model.