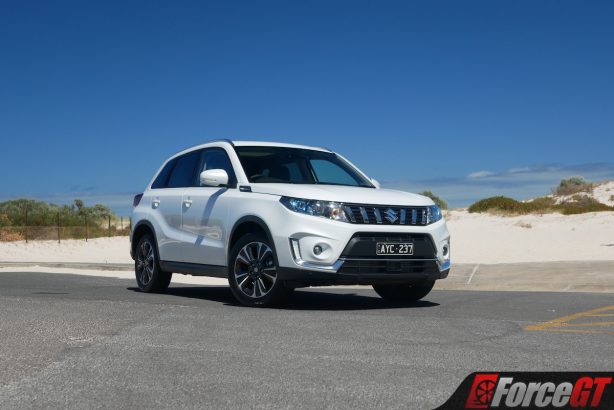 The four-year-old Suzuki Vitara has been given a refresh for the 2019 model year, and it’s one Suzuki deems to be significant enough to warrant it being dubbed the Series II version.

This update is more than Suzuki simply giving it the usual styling tweaks and adding some nicer interior bits, even though it may just look like that on the surface. In reality, however, the levels of safety equipment have been ramped up significantly and the line-up has been given an overhaul, meaning the changes are more than skin-deep.

To figure out if these efforts have paid off and have done enough to keep the Vitara feeling fresh in 2019, we grabbed the keys to the range-topping Turbo AllGrip variant, which sees the greatest number of changes. 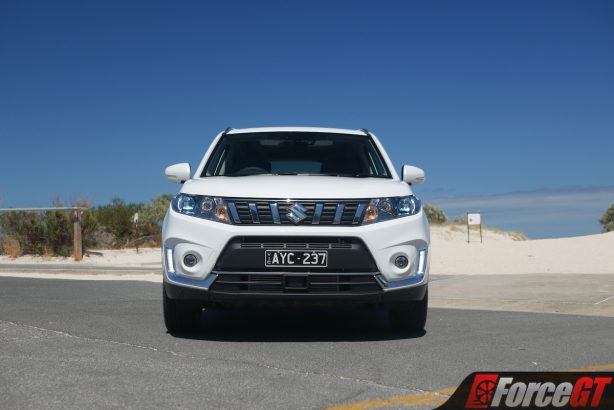 The focus for the Series II Vitara has been the increased levels of active safety kit for the two Turbo variants. A camera and laser-based autonomous emergency braking system, lane-departure warning, weaving alert, radar and camera-guided adaptive cruise control, and blind spot monitoring with rear cross-traffic alert have all been added to the two most expensive Vitara variants. However, none of that is available on the unnamed base model (which replaces the RT-S) even as part of an options pack.

The two Turbo variants also gain what’s dubbed premium suede upholstery on the centre-section of the seats and front door cards, which is dressed-up with some embossed patterns, although they do lose the red interior highlights around the air vents and gauges of the Series I model. The Turbo AllGrip does, however, gain a panoramic sunroof as standard, something previously offered only on the outgoing RT-X diesel.

The other thing the Turbo AllGrip gains from the RT-X is, as the name suggests, its AllGrip multi-mode all-wheel drive system. Controlled by a rotary dial selector on the centre console, it offers an Auto mode for on-road use that determines if power needs to be sent to the rear wheels; a Sport mode that instructs the transmission to hold onto the gears longer and makes the steering feel heavier; a Snow mode which seems somewhat pointless in Australia but does aid when driving on loose gravel; and 4WD Lock which splits the power 50/50 between the front and rear wheels, which is only able to be used with the car in Snow mode.

Not all the new upgrades are reserved for the Turbo models, however, as all variants now gain a sliding front armrest, a 4.2-inch colour screen in the instrument cluster, and the use of softer plastic for the dashboard.

Additionally, the looks have been tweaked slightly, with a revised front bumper with chrome accents around the fog lights and DRLs, along with some new alloy wheel designs, and some tinted taillights at the back to deliver a more uniform look. 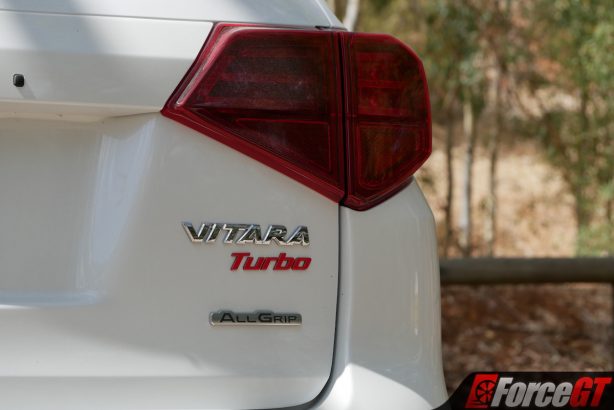 The Vitara retains the same basic exterior shape and interior design, so other than the line-up shuffle that has come with the Series II model, it’s really just a mild facelift and opportunity to tweak a few things. As such, there haven’t been any major improvements made with regard to interior comfort and packaging, other than the new sliding armrest.

Interior comfort is good in the front, with comfortable and fairly supportive seats and nicely padded armrests, and the driving position is excellent with all controls kept perfectly within reach. There’s a good array of little storage cubbies and shelves, and the door pockets are nicely-sized too. The new soft-touch dash does lift the cabin ambience slightly, although the rest of the interior plastics are rather harsh and cheap-feeling, and there’s also a lot of road and wind noise intrusion in the cabin at freeway speeds. It should be said, however, that everything does feel very solidly put together.

While headroom is good and legroom is fine for the outboard rear-seat occupants, it’s worth pointing out that there’s no centre armrest, and that the armrests on the doors aren’t padded like those in the front.

The size of the boot also manages to present one issue. While we do like that there’s an adjustable false floor that allows for the boot to be deeper with the rear seats up, or flush with them when they’re down, it is rather on the small side – something that became apparent when I needed to give two friends a lift to the airport and was unable to fit both of their suitcases in the boot.

One thing we do still like, however, is the infotainment system that’s retained that offers a 7.0-inch touchscreen with standard satellite navigation and Apple CarPlay and Android Auto compatibility. It might not have the most incredible screen resolution out there, but it’s very simple to use with its colour coded menus, and programming the sat nav or hooking up your phone doesn’t require an electrical engineering degree. 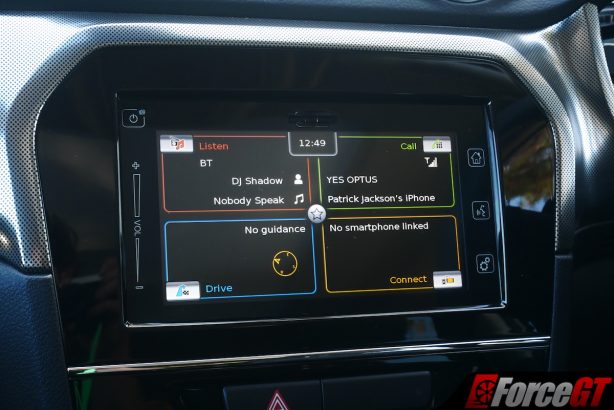 Two petrol engines are available in the revised Vitara, with our tester sporting the more powerful 1.4-litre turbocharged four-cylinder that makes 103kW and 220Nm. Paired exclusively to a six-speed automatic transmission, its available with either front-wheel drive or Suzuki’s AllGrip all-wheel drive system, the latter of which we have on our range-topping tester.

While it would be easy for the unfamiliar to think that the engine in the Vitara Turbo is simply a slightly-detuned version of what’s in the Swift Sport, it’s actually the other way around, as this peppy little unit was lifted from the Vitara to power Suzuki’s pint-sized hot hatch. 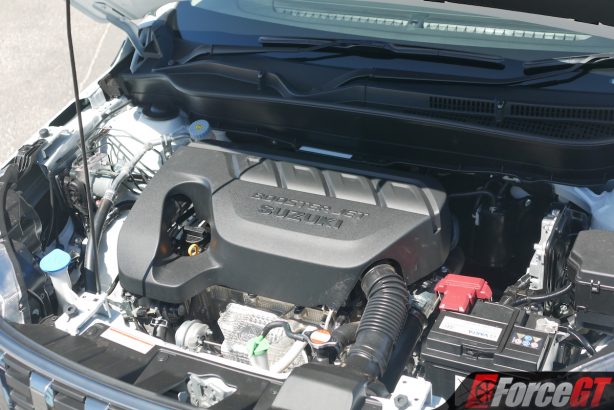 Fuel consumption in the Vitara Turbo AllGrip is listed at 6.2L/100km – opt for the front-drive Turbo model and the claim drops to 5.9L/100km – and we saw an indicated return of 8.0L/100km over the course of our week with the car. This is up a bit from Suzuki’s claims, although it’s worth noting our tester was brand-spanking new when we grabbed the keys with just 74km on the clock, so you can expect fuel consumption to go down slightly over time. Do also note that the turbocharged versions demand premium 95RON fuel.

If performance isn’t of concern, a 1.6-litre naturally aspirated engine making 86kW and 156Nm is also available in the base Vitara with either a five-speed manual or six-speed auto, and is only available with front-wheel drive. 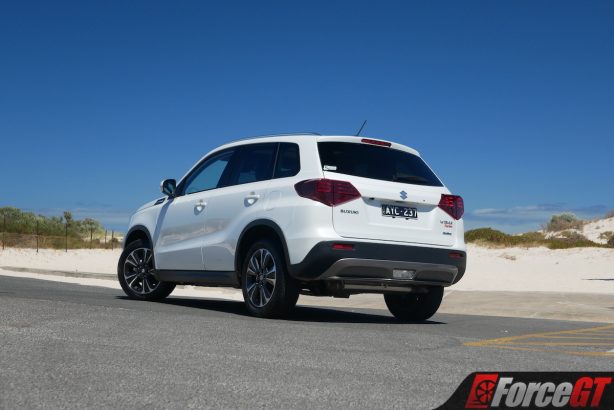 Suzuki’s reputation for building sharp-handling, fun-to-drive cars is thankfully not lost on the Vitara, with the Swift Sport link clear to be felt from behind the wheel of the Turbo variants.

Although its 1.4-litre engine is definitely on the smaller side, it’s got plenty of punch once you sink your foot into the loud pedal, with it really coming to life above the 3,000rpm mark. Admittedly, there is a big of lag lower-down in the rev range simply due to its low displacement, which is exacerbated more in the Vitara than the Swift Sport due to its heavier weight, but it does help it feel stress-free when putting around town.

The conventional six-speed automatic makes for a great transmission paring, with its shifts feeling predictable and surprisingly quick. It’s nice and responsive to command from the paddle shifters on the back of the steering wheel, too, meaning it really does tick all the boxes. 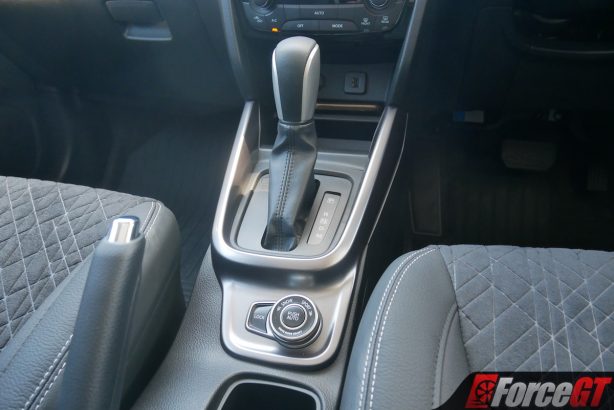 Despite the torsion beam rear suspension utilised in all variants, the Vitara handles itself rather well, remaining flat and composed through all but the most off-camber of corners. The torsion bean does, admittedly, make itself known over particularly sharp mid-corner bumps, as you can feel it doesn’t quite have the ability to absorb them as well as a multi-link setup would, but it’s easy to forget that it’s all you’ve got back there.

Its steering, as is often the case with Suzukis, is a real highlight though. Well-weighted, progressive, and linear in feel, regardless of whether it’s in its standard or Sport setting, it has one of the nicest-feeling steering racks in the class – further enhancing what is already a very fun, sporty little crossover.

Its quick steering, combined with its diminutive size and punchy engine, makes it a real gun in traffic too, as you can simply cut your way through any gaps that appear, while its suspension remains fairly absorbent of most road imperfections that you’d expect around town. 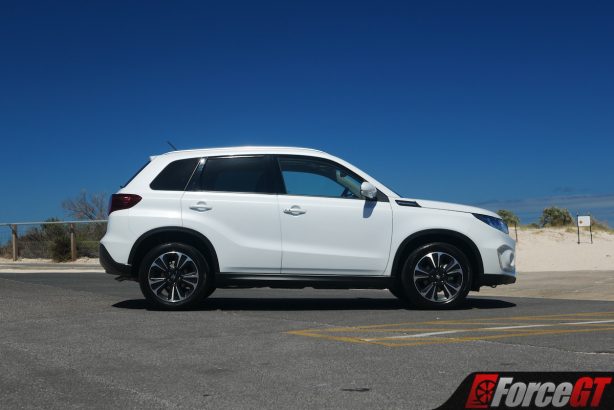 How does it compare to its key rivals?

The small SUV crowd among which the Vitara competes is one of the largest, fastest growing, and most competitive segments in the Australian market, with the Vitara now faced with a few newer rivals. Nonetheless, it held a fairly respectable 4.1 per cent market share during 2018.

Working in the Vitara’s favour most is that turbocharged engines are few and far between in the segment, and the one it sports is one of, if not the sweetest among them. It feels far peppier and more eager to rev than what some of its rivals offer, and its pairing to a conventional automatic transmission makes it feel far more predictable and smooth, too.

The Vitara easily matches the best in class in regards to handling as well, exhibiting almost none of the typical body roll expected from most SUVs despite only sporting a torsion beam rear-end, rather than an independent multi-link setup.

For a somewhat sporty version such as the Turbo AllGrip on test, it stacks up well on price, too, coming in at $33,990 before on-road costs. We feel it could be a little cheaper – especially seeing as the price is up $1,000 from last year – but it is still pretty good value considering how much additional active safety tech you’re now getting.

With a few minor changes and improvements, particularly for the Turbo AllGrip model on test, the Series II Vitara remains a strong contender in the competitive small SUV sect.

With stand-out features like its sued upholstery and standard sunroof and sat nav giving it an edge over some of its rivals, its the fun and charismatic way in which it drives that gives it an edge over the rest.

It’s not perfect, as there is still some cheap interior trim and the odd missing feature here and there, but the Vitara does present itself as a worthy contender that’s now up to scratch for 2019.