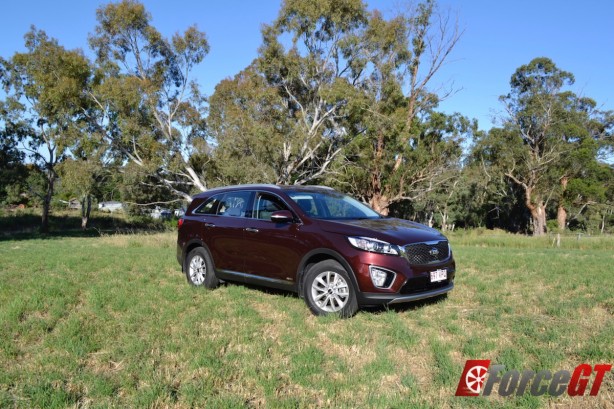 It is hard not to be impressed with Korean products these days; from smartphones to smart looking Korean cars, they look, feel and work a treat.

However, it was only in relatively recent memory the Koreans were peddling rough and basic models such as the Kia Mentor and Hyundai Excel.

Not anymore. They are now as good as, if not better than, their Japanese and European counterparts. And thanks to wise investments made in the area of design and engineering, they are stylish, well built and engineered.

One such vehicle is the latest, seven-seat 2015 Kia Sorento.

Our Si Diesel tested here is priced from $44,490. Besides getting the frugal turbodiesel engine, it also gains all-wheel drive – a diesel-only proposition. A six-speed automatic is standard on all variants. 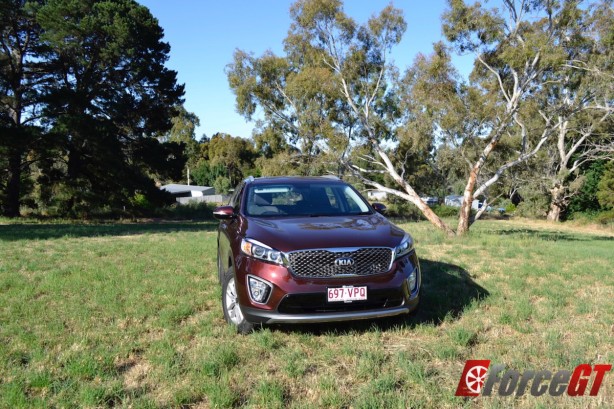 The Kia Sorento was first introduced back in 2002 as the brand’s first full-size SUV. The current model is bigger and better than ever before, continuing Kia’s tradition of generous equipment and a spacious and practical interior.

Built on Hyundai-Kia’s ‘N’ platform shared with the new Carnival people mover, the latest Sorento brings an evolutionary styling that subtly bring the car up to date, while retaining its predecessor’s long bonnet and characteristic wide D-pillar. 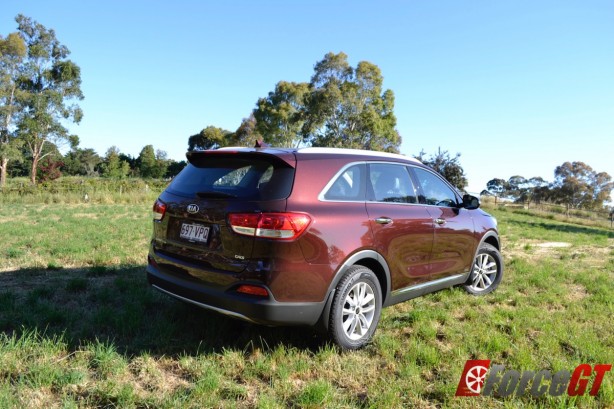 In profile, the new Sorento appears lower thanks to a lower roofline to give the car a more dynamic look.

At the back, the resemblance with the Carnival is striking, with nearly identical taillights and number plate applique.

What impresses most though, is the Sorento’s classy new interior. Styled by the brand’s Frankfurt-based European design team, the stylishly crafted cabin features significantly higher quality materials, with most touch points generously covered in soft-touch materials that wouldn’t look out of place in an Audi.

The layout of the instruments, major controls and secondary systems are all intuitive and easy to use. 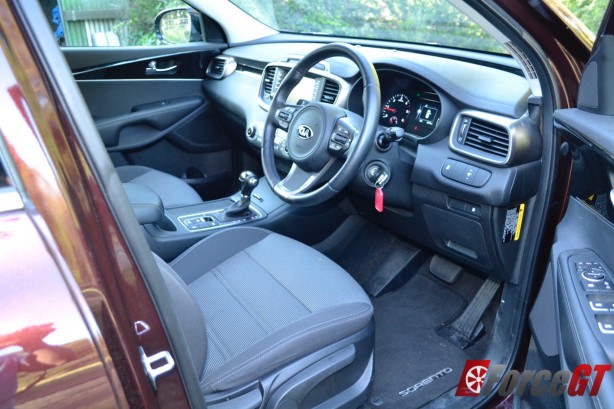 It’s comfortable, too, thanks to the tubby front seats, plentiful knee room and well-placed pedals, although the lack of lumbar support is a mystery. It’s a similar story further back, with generous second row seats that slide fore and aft and back rests that tilt for added comfort.

The third row of seats is relatively easy to put up, clicking into place at the tug of a belt tie, while the luggage cover stows conveniently in its own recess below the boot floor.

Access to the third row can be tricky for some however, as the second row seats do not tumble forward. But once in, it is surprisingly spacious back there. They also get their own air conditioning vents and controls to play with.

Thanks to the new Sorento’s 80mm extra wheelbase, luggage space has increased from 515 to 605 litres with the third row seats folded flat. 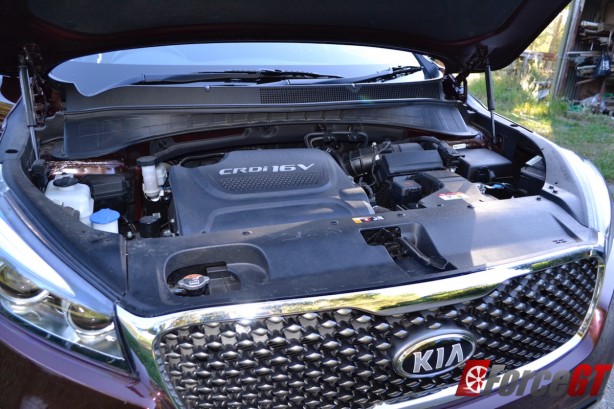 The new Sorento is powered by either a 3.3-litre MPI V6 petrol from the Lambda II family with 199kW of power and 318Nm of torque, or a 2.2-litre turbodiesel generating 147kW and 441Nm of torque.

While the V6 is largely carried over, the R Series turbodiesel has received a number of component upgrades to improve smoothness and efficiency. It may not be the most powerful diesel amongst its peers, but it has good urge and matches well with the smooth six-speed automatic. It’s quick to step-off and has strong mid-range punch. 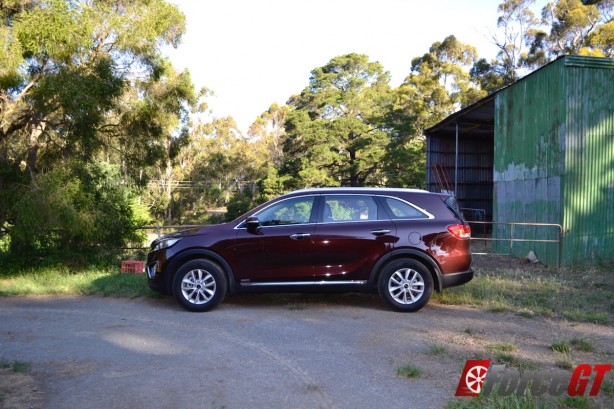 It is also a big comfortable cruiser with impressive refinement, thanks to its locally tuned suspension and extra insulation in the engine bay, wheelarches and dashboard. Wind noise does become more apparent at higher speeds, but that’s likely due to the wing mirrors.

Around the corners, the Sorento suffers from minor body roll but the body is rarely troubled by bumps or broken tarmac. Its steering is well weighted and relatively precise, while the all-wheel drive system delivers a high level of confidence and grip.

Compared to the closely related Hyundai Santa Fe, the Kia comes across as sharper and more refined. 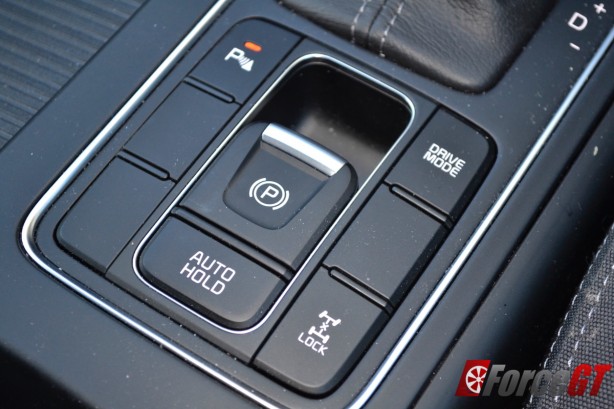 There’s also a new Drive Mode Select system, which is activated via a switch on the centre console. ‘Normal’ mode is best suited for day-to-day driving, ‘Eco’ mode reprograms the shift points of the automatic transmission to achieve optimum fuel economy, while ‘Sport’ mode allows the gearbox to delay shifting and reduces the level of steering assistance without bring better feel. 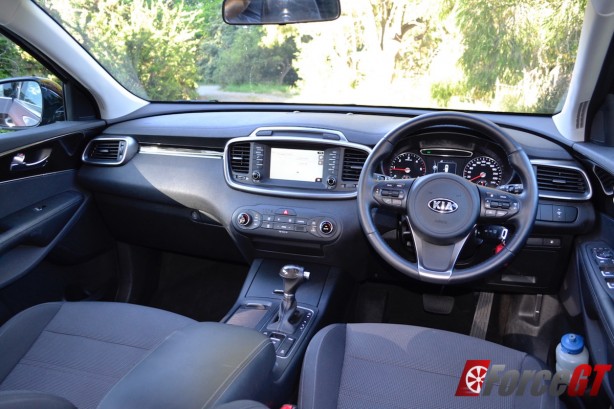 The 2015 Kia Sorento is a real step up in terms of quality and materials. All panels are well aligned with gaps so small an insect will find it hard to squeeze through.

Inside, the dash, doors and centre console are all generously covered in soft-touch plastics.

There’s also LED mood lighting to add a bit of dazzle at night.

Our weeklong test over a mix of urban and freeway driving saw the Sorento’s trip computer returned 9.8L/100km of diesel – exactly 2 litres per 100km more than Kia’s official figure. 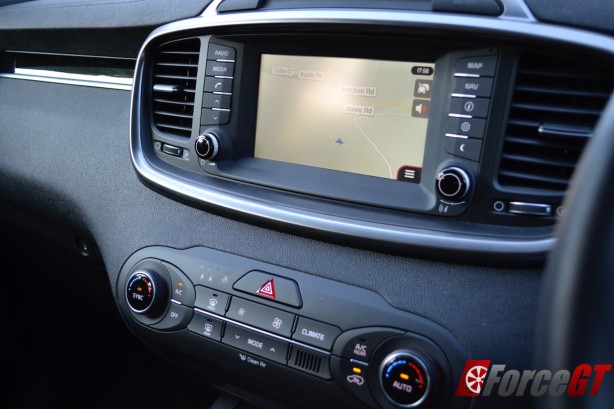 The new Sorento debuts a number of advanced technology for the model, including the Smart Power Tailgate (SLi and Platinum) automatically opens when the key is ‘sensed’ in the vicinity of the boot.

The 2015 Kia Sorento serves up great practicality in a well-built and comfortable package.

It is much more refined and easier to drive compared to some ute-based seven-seat SUVs and Kia’s huge leap in interior quality is commendable.

A Kia or Hyundai badge is no longer inferior.