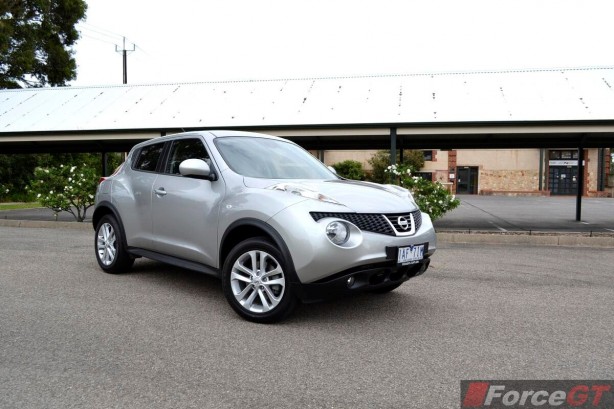 If this page could sing, you might recognise the song – The Crazy Frog Song. It invaded mobile phones all over the world and is arguable one of the most annoying ring tones, ever. Yes. That one. If you still have no idea what I’m going on about, consult Mr Google.

You see, the Nissan Juke reminds me of a frog, with its wildly styled body that while not ugly, won’t win the price in a beauty contest either. “Out there” might seem an appropriate word to describe it. 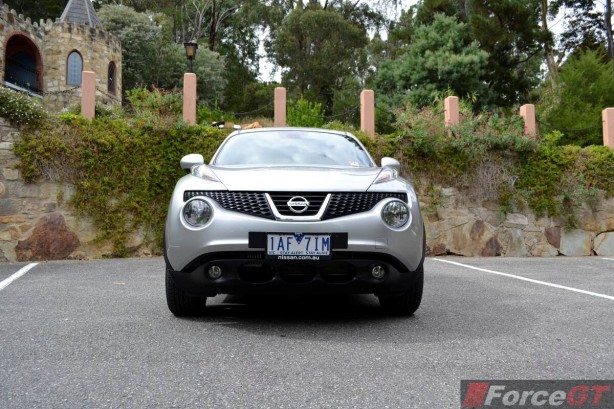 Nissan said the car was “inspired by a number of active lifestyle influences including motorcycles and rally cars”. Can’t say I can see the former, although its coupé-like rear haunch does give it a speedy persona.

While brand new in Australia, the Juke has been on sale in Europe for a couple of years. Built on the underpinnings shared with the Nissan Micra, the Juke joins the proliferation of compact SUVs that is currently sweeping up a storm in Australia.

Opinions are split on the Juke’s appearance but one thing that we can all agree on is – it won’t induce a coma. What looks like headlights are in fact parking light and indicators that appears to explode upwards through slashes in the bodywork. Its headlights are where you are supposed to find the fog lights in other cars. 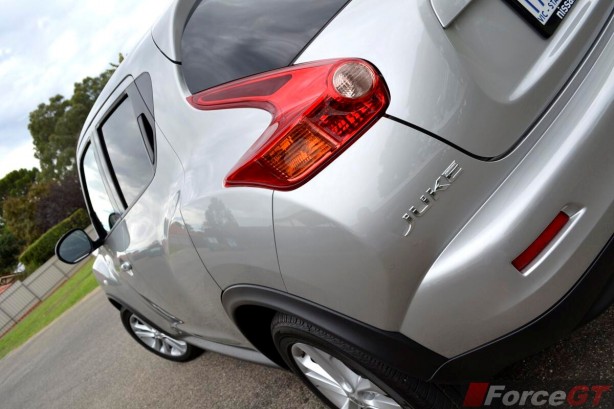 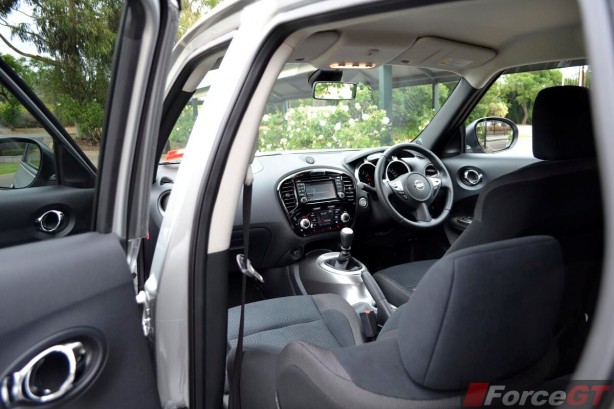 Around the sides, its blistered wheel arches give the car a wide stance, and together with a fast sloping roof and hidden rear door handles, the Juke looks decidedly racy in profile.

Inside, the hard dash plastics betray the car’s age. Unlike the car’s exterior, the Juke’s interior is less unorthodox yet still holds an element of surprise. Its climate control and Dynamic Control system cleverly share the same buttons that change like a chameleon depending on what is selected.

There are plenty of cupholders in the cabin and the driving position isn’t too bad, even with a tilt-adjustable only steering wheel. While there’s enough space for two normal-sized adults in the back, headroom is a luxury due to the sloping roof. 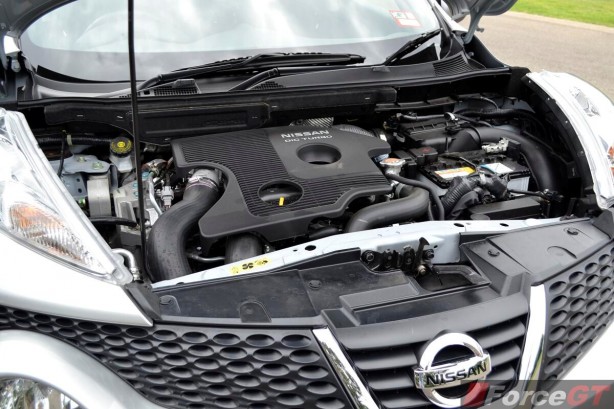 The Juke is offered in three trim levels and two petrol engine options in Australia. It kicks off from $21,990 for the 2WD ST Manual powered by a 1.6-litre normally aspirated four-cylinder petrol engine that generates 86kW @ 6,000rpm and 158Nm @ 4,000rpm.

With 1,249kg to shift, it takes 8.4 seconds to reach 100km/h from a standstill. While it’s no hot hatch quick, that’s still a respectable figure. The Juke is also surprisingly fun to drive. Its low-end torque deficit is well masked by the eagerness in throttle response when Sport mode is selected through the Dynamic Control System. 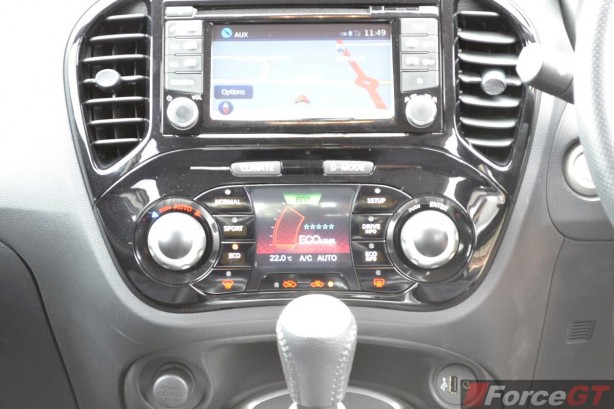 From there, selecting Normal and Eco modes will gradually restricts the throttle opening to the point where you may gain a few extra kilometres but at the expense of responsiveness. Which is why it has stayed in Sport during our time together.

The Nissan Juke is one of the most firmly suspended compact SUVs I have encountered. While that means it handles corners much better than its more comfort biased counterparts, the ride around town is relatively firm. Expectedly, it jiggles over small bumps but will keep bigger body jolts well under control.

The taller body also means it tends to roll in corners. Lean on a corner too hard and you start to feel the weight rapidly transfers to the outer front wheel before the electronics step in to tidy things up.

Its steering is precise and quick, but has the artificial feel inherent of electric power steering, with a gooey feel on either side of straight-ahead and little change in weighting, even when adhesion is lost.

Engaging Sport mode only adds to the weightiness of the steering without any corresponding gain in clarity of communication. 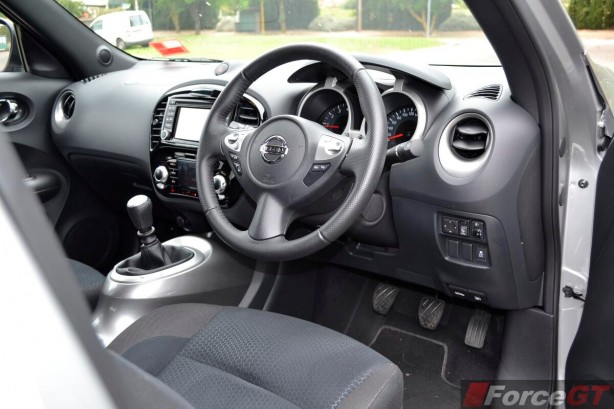 The UK-sourced Juke appears to be well put together. There are hardly any squeaks or rattles from the cabin and most switchgear has a robust feel to them.

Besides, Nissan also has a strong track record of building reliable cars. 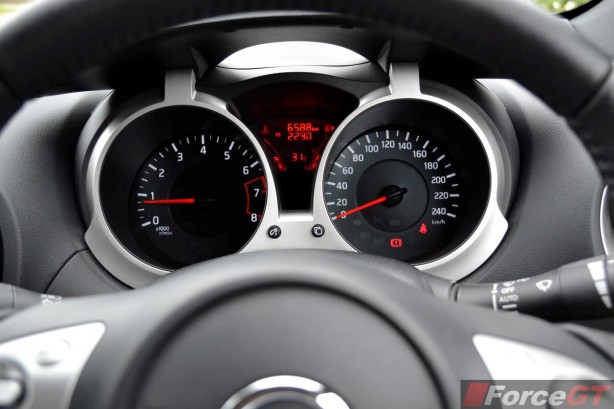 As a rather unexpected surprise, our week long test saw the Nissan Juke returned a combined average of 7.1L/100km, just 0.2L/100km more than its maker’s claim.

Due to its European origin, the Juke demands at least 95 RON fuel. 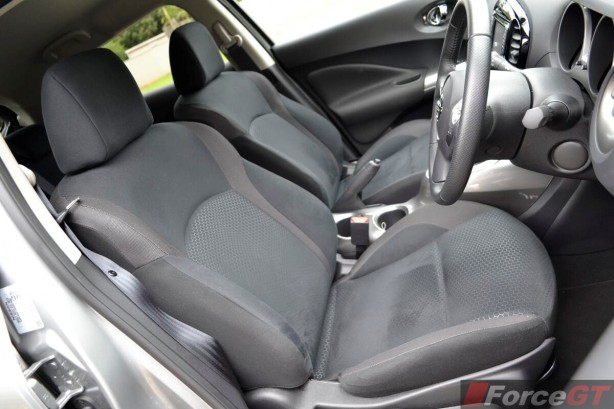 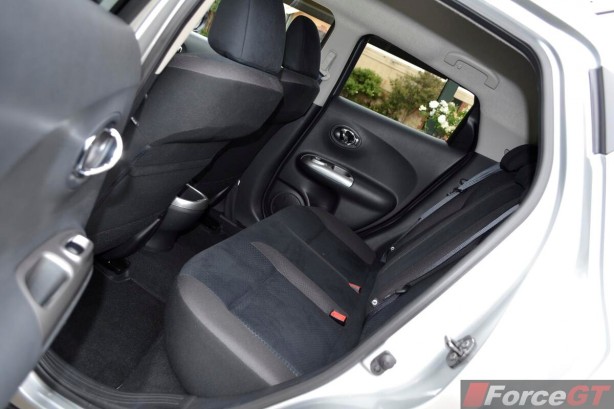 There is also a 5-inch colour LCD display (except ST) and 6-speaker audio with satellite navigation.

If you are after a compact SUV that looks like the Crazy Frog, is relatively fun to drive and doesn’t cost a bomb to buy and run, the Nissan Juke ticks all the boxes.

Most of all, we take our hats off for Nissan for pulling off such a daring design.

However, its packaging is compromised by restricted rear headroom and a small boot.

But then, if practicality is your priority, we suggest you look elsewhere.