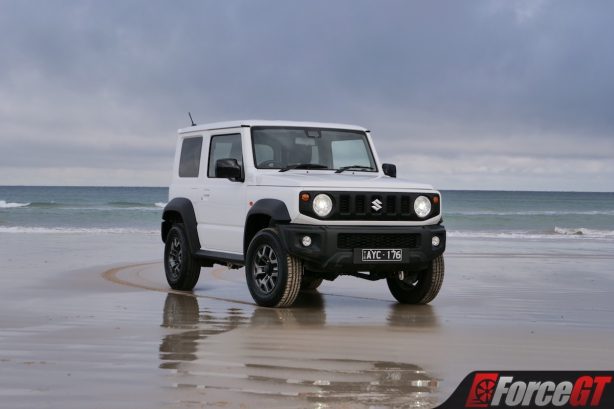 Well, it’s finally upon us – the plucky little Suzuki Jimny has entered just its fourth generation since all the way back in 1970, and it’s been making rather the splash in the world of off-roaders since it was first unveiled last year.

In a time when technology-filled expensive SUVs and utes the size of aircraft carriers are what most turn to when heading off-road, the Jimny is serving as a reminder of when things were much more simple.

You see, where most off-roaders these days have to serve many purposes, being able to ride and handle well and offer strong straight-line performance, the Jimny has just one task it’s focused on – proving that all you need to cross any terrain is dual-range selectable four-wheel drive and a plucky little four-pot engine all tucked inside a short and narrow body that makes it look like a toy car next to the four-wheeling behemoths of today. 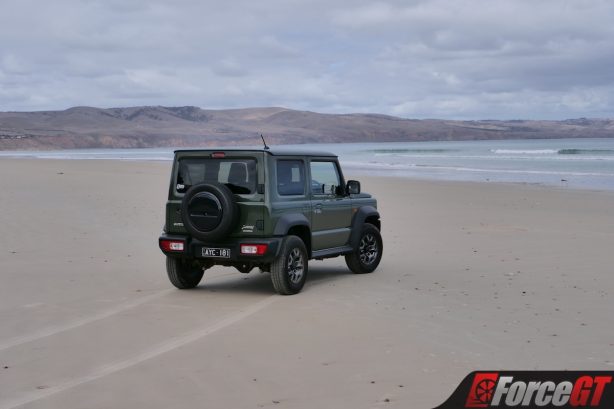 While we’ve already written about how the Jimny performs well in the urban jungle as a cheap and cheerful run-about car that’s easy to park and drive, what I wanted to do when I got my hands on not one but two Jimnys was see just how well the new model can really handle itself over the rough stuff.

A few unexpected niceties are also offered, too, such as the fantastic LED headlights with washers and auto high beam control that are brilliant for if you’re off-roading at night. However, it’s clear to see where corners have been just to keep the cost down – for instance, there’s no variable intermittent windscreen wipers, along with no intermittent setting for the rear wiper at all, while the stereo is pumped through just two speakers. We also miss out on items available in other markets such as heated seats as well, as the blank switches remind. 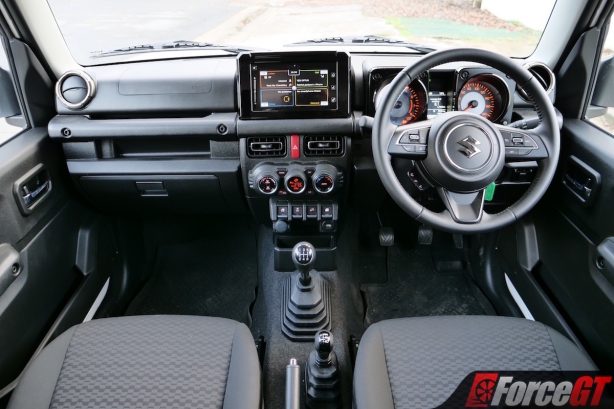 Under the skin, the same engine is fitted to all Aussie Jimnys – a 1.5-litre naturally aspirated four-cylinder producing just 75kW and 130Nm. To put it into context, that’s slightly less power and the same torque as an original Mazda MX-5 from the early 90s, although at least the Jimny doesn’t weigh all that much more than one.

It’s a good thing, then, that we only receive what’s known in its home market of Japan as the wide-body Jimny Sierra, as the regular Jimny over there sports only a 660cc three-cylinder.

With all Jimnys coming standard with dual-range part-time four-wheel drive, there’s just one difference between them, which is their transmissions. The white Jimny you see pictured came with a five-speed manual gearbox, while the green car was fitted with a four-speed automatic. And if you want to talk money, the automatic asks for an additional $2,000 on top of the Jimny’s base price of $23,990. 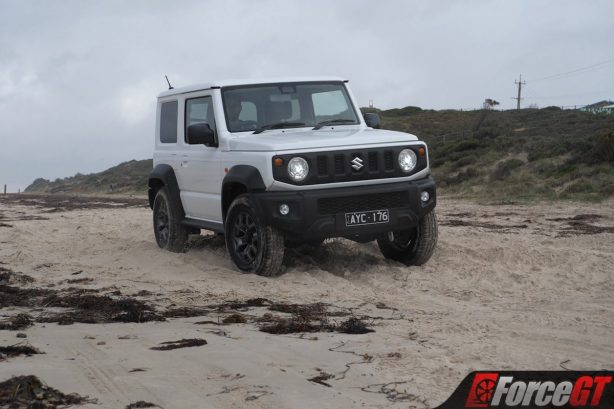 Before we even get to how they perform off-road, it’s worth pointing out – since our first drive of the Jimny was in the manual – that the automatic is, quite frankly, a bit of a waste of time. Unless you simply cannot get the hang of driving a manual, which shouldn’t be too hard given just how easy the clutch and gearbox in this thing is to master, there’s no reason as far as I can see it for paying another two stacks for the slushbox.

With just four gears on offer, and even an overdrive lockout switch which is something I last encountered in a Nissan 300ZX, it would be fine if this was the 1980s, but in today’s age it feels archaic. It also feels as though it’s wringing the neck of the little 1.5-litre engine constantly, too, due to the tall gearing and greater parasitic power loss meaning it’s forever working harder, which is reflected in the much higher real-world fuel consumption of 8.0L/100km for the auto and 7.3L/100km for the manual.

I won’t say that it entirely spoils the fun or ruins the charm of the Jimny entirely, but for a $2,000 premium you’d expect better, especially given just how fantastic the manual is to drive. 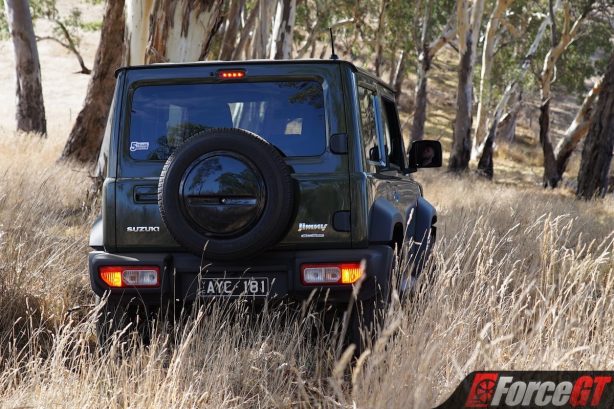 With a suprisingly tight and notchy shifter given the height of it, and a light and progressive feel to the clutch, it’s incredibly easy to drive whether in traffic or in the middle of the bush. Plus, it lets you extract all of what the little engine has to give far more easily, which is almost necessary in something with as little grunt as this.

The lack of power is only really noticed on the open road, however, where it revs high and lacks oomph when you’re trying to overtake. Around town, it’s totally adequate though, and when you’re off-road it simply doesn’t factor into the equation at all.

Remember how I said that all this thing has been designed to do was absolutely kill it off road? Well, thanks to it’s incredibly low gearing when low-range is selected, the power issue simply isn’t one any more. 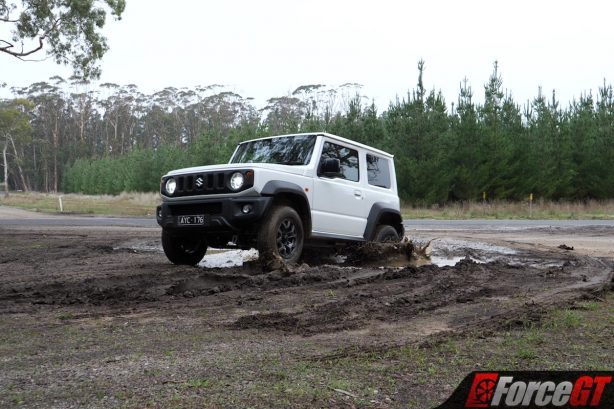 Over any terrain or up any incline, the Jimny always manages to feel far more powerful than it actually is. In the automatic especially, traversing steep ascents requires barely any throttle input at all as it just relies on slipping the torque converter, while in the manual, second gear will get you anywhere you need.

And given its excellent 37 and 49 degree approach and departure angles respectively, along with the fact everything is tucked up close on the underside of the car with the differentials being the expected low points, you’ll have no trouble clearing any obstacles you encounter either.

When you’re on really challenging terrain especially, it becomes clear very quickly just how rugged the Jimny really is. With a proper ladder frame that is stronger more rigid than before, and three-link coil-sprung live axles both front and rear, this is not toy off-roader – it’s the real deal. 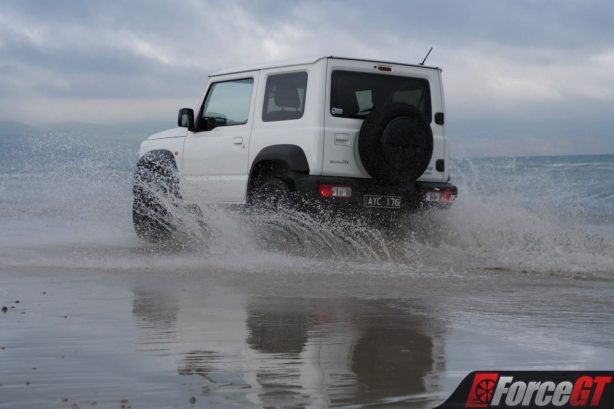 There’s an almost complete lack of technological assistance when it comes to off-roading this thing, too, meaning the responsibility all falls back onto you as the driver.

In fairness, however, there are a couple of features it does have that help out where they can. To account for the lack of locking differentials, the traction control system will do its best to mimic limited-slip diffs by applying the brakes to whichever wheel requires it as a way of torque vectoring, while there’s also Hill Descent Control and Hill Hold Control to lend another helping hand every now and then.

But on every surface I pitted the Jimny against – gravel, sand, mud, and water – I found myself not really needing to use any of the few systems it offered, because it simply never seems to struggle for traction for more than a fraction of a second. I’m being entirely honest when I say that it’s one of the easiest and most capable cars I’ve ever driven off-road, as it just requires no real thought. 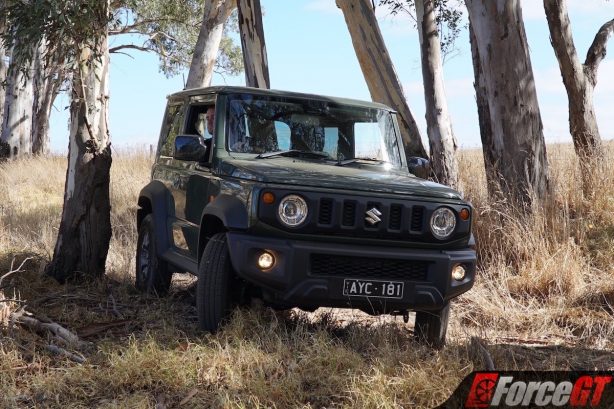 It’s narrow enough and has a tight enough turning circle to get you through and around anything, and its 210mm of ground clearance means you’re never really worried about scuffing it up too much.

The fact it rides on just 15-inch wheels means there’s plenty of sidewall on those highway-terrain Bridgestone Duelers as well, meaning not only does it ride suprisingly well – even if it does hop around a bit on bumpier tracks – but you never have to worry about damaging those alloys.

And, given just how light it is at around 1.1 tonnes depending on which transmission you opt for, the low weight means the road-biased tyres never feel like they’re struggling to keep putting the power down and pulling you along off-road. 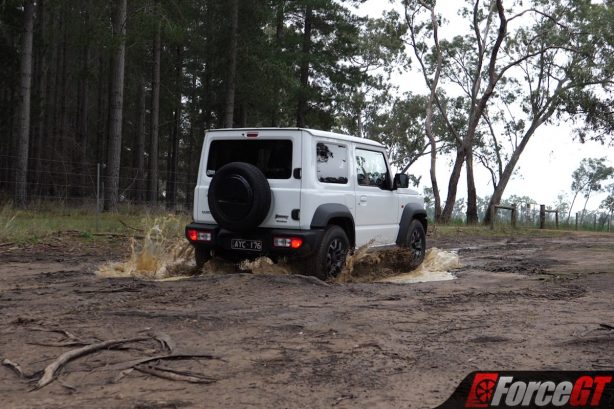 It’s very impressive just how composed the Jimny remains when you’re pushing it to its limits. Clearly, all the chassis stiffening and other tweaks added over the old model – along with some extra power – has all done the trick in making this new Jimny a joy to drive around town and off the beaten path.

It might not be the best highway cruiser, but did you really expect it to be? And sure, it skimps on a few minor items we take for granted these days – Suzuki, please add variable intermittent wipers when you get the chance! – but what do you expect given the $24k price point?

In a nutshell, the Jimny is honestly all the off-roader that you need, and it’s one of the most fun cars I’ve had the pleasure of driving off-road in quite some time. 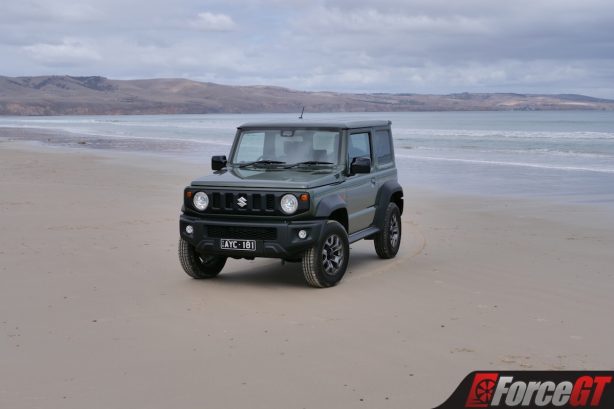 Given its $23,990-plus price tag, it’s incredibly impressive just how much the Jimny can do off-road. With low-range gearing that extracts the best out of the engine, and such a light overall mass that it largely negates the need for expensive goodies such as locking differentials, it’s one hell of an off-roader.

But even beyond that, it feels well-made and reliable, it’s fantastic in city traffic, and offers nearly all the features you could want – other than variable intermittent wipers, of course.

However, there are some drawbacks. The four-speed automatic isn’t worth bothering with in my opinion unless you can’t handle three pedals as it’s under-geared, lethargic, and really puts some strain on the engine, but perhaps the cardinal sin it commits is only managing a 3-star safety rating which isn’t exactly a confidence booster.

But regardless, the Jimny does make for a great-value buy, a fantastic off-roader, and one of the most fun and characterful cars out there right now.

Previous Audi Q7 gets new looks and upgraded tech
Next Toyota Supra convertible imagined but will we ever see it? 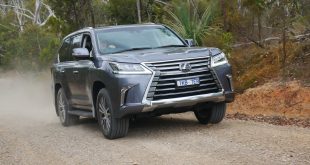