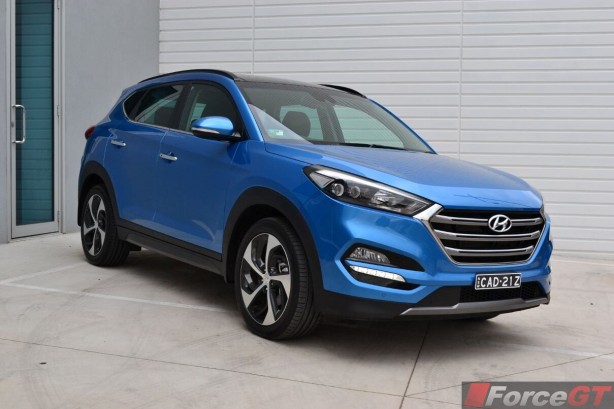 The new 2015 Hyundai Tucson is a slightly larger replacement for the now-superseded and much loved ix35 crossover.

The Tucson name itself isn’t new, having adorned the rump of the first generation small SUV from the Korean brand from 2004 to 2010; before being replaced by the Euro-sourced ix35. In keeping with Hyundai’s current naming convention, global models are known by names, while European bound models by alpha-numerics.

Despite sharing its name with an American city, Australian-delivered Tucsons are made in Hyundai’s factory in the Czech Republic.

Priced from $27,990 for the entry-level 2WD Active, Hyundai’s latest mid-size SUV tops out with the $45,490 turbo-diesel AWD Highlander. 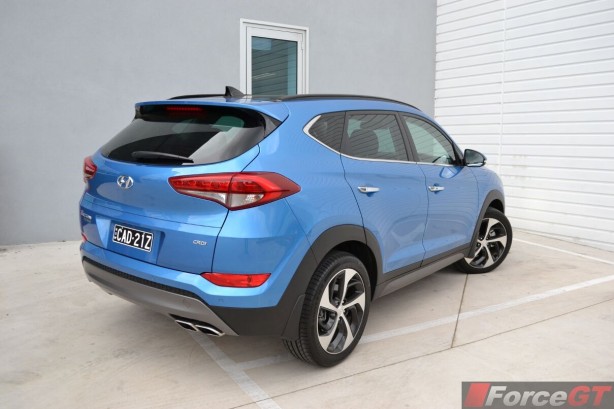 Longer and wider than the ix35, the all-new Tucson is now considered a ‘Medium SUV’ by the Federal Chamber of Automotive Industry’s (FCAI’s) vehicle classification.

It sits on a 30mm longer wheelbase compared to its predecessor and is 65mm shorter than a Mazda CX-5, yet has 85 litres more boot space (488 litres) with the rear seats in place – while carrying a full sized spare wheel.

It blends bold proportions with strong character lines to create an athletic and sporty stance. At the back, there’s a hint of Jeep Cherokee in its rump as well. Wheel sizes range from 17-inch in the Active to stylish 19-inch on the Highlander. 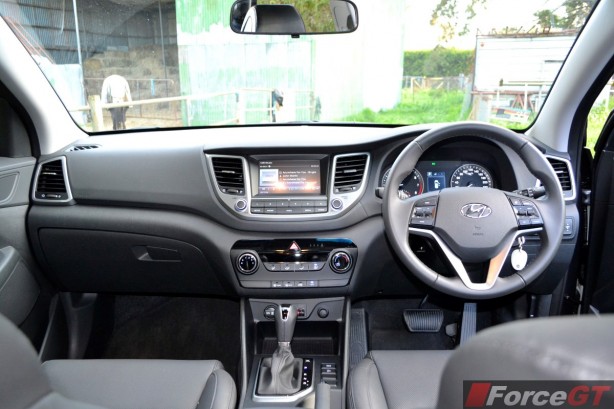 It’s a different story inside the cabin. The interior is hardly inspirational to look at, lacking the design flare exhibited by the exterior. The hard plastics on the dashboard is also a let down, especially in the $45,490 Highlander.

What the Tucson has is an abundance of storage space, plenty of room, comfortable seating for five and a large load bay. There are also bag hooks in the boot to keep the shopping in place. 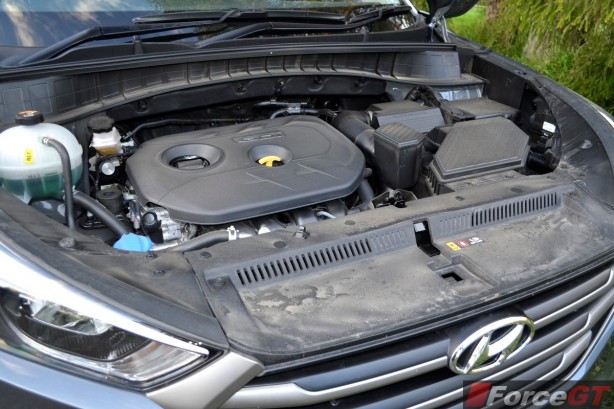 The 2015 Tucson is offered with a choice of four engines, three transmissions and two drivetrain layouts.

The two-wheel-drive Active and Elite models are equipped with a 2.0-litre four-cylinder multi-point injection engine generating 114kW at 6,200rpm and 192Nm at 4,000rpm. It is mated with either a 6-speed manual or automatic transmission driving the front wheels.

The Active X we sampled is motivated by Hyundai’s 2.0-litre direct-injected four-cylinder petrol paired with a six-speed automatic transmission. It produces 121kW at 6,200rpm and 203Nm of torque at 4,700rpm, which is only just adequate as long as you are not in a hurry or carrying a full load.

Demand more and you’ll have to pile on more revs like a hungry teenager gulping down a cheese burger, resulting in intrusive engine noise.

The Elite and Highlander AWD can be had with the 1.6-litre turbocharged four-cylinder direct injected petrol engine shared with the Veloster SR Turbo. It delivers 130kW at 5,500rpm and 265Nm of torque @ 1,500-4,500rpm and is matched with a 7-speed dual clutch transmission.

We also spent time with the range-topping AWD Highlander, which is propelled by a 2.0-litre common rail direct injection four-cylinder turbo-diesel engine putting out 136kW at 4,000rpm and 400Nm at 1,750-2,750rpm. Power delivery is linear for a diesel, with minimal turbo lag and a strong mid range.

The six-speed automatic is also more than willing to tap into the lower rev range at first chance to harvest the abundance of torque down low, keeping fuel consumption low. 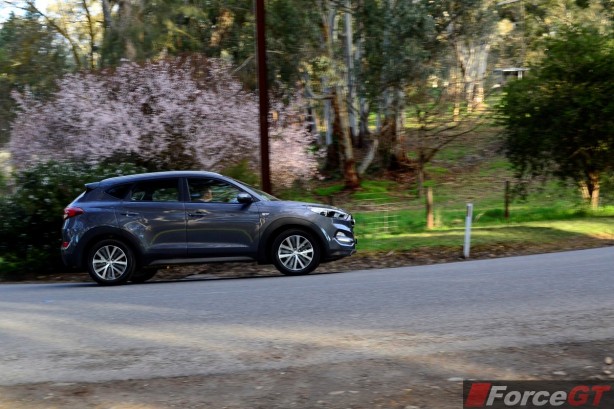 Out on the road, the Tucson tackles both city and country roads with ease, rarely troubling the driver and passengers. It rides well and has good body control, although minor body roll is evident on tighter corners.

While its steering is well-weighted and precise, there is little in the way of feedback through the wheel.

The six-speed automatic gearbox is pleasingly smooth and changes gear relatively quickly, but the lack of steering wheel-mounted paddles, even in the range topping Highlander, is a disappointment. 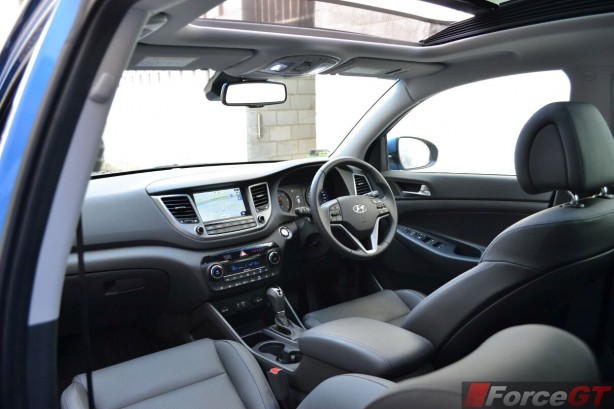 As with Hyundai’s latest generation of products, the Tucson is well built, with good fit and finish. There are no squeaks or rattles in our admittedly new test car with just 1,500km on the clock.

All doors open and shut with a satisfying ‘thunk’.

On test, the 2.0-litre GDI petrol engine returned an average of 9.1L/100 – a disappointing 1.2 litre more than the official claim. 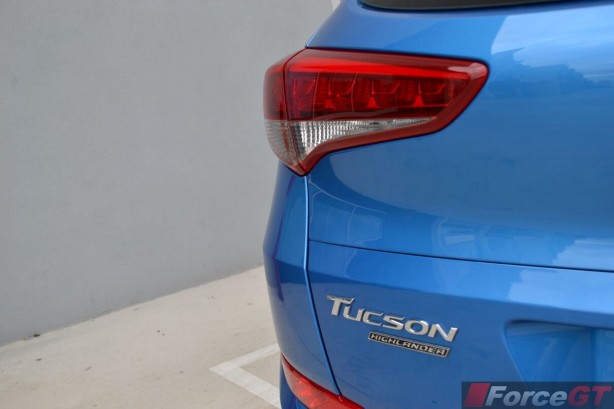 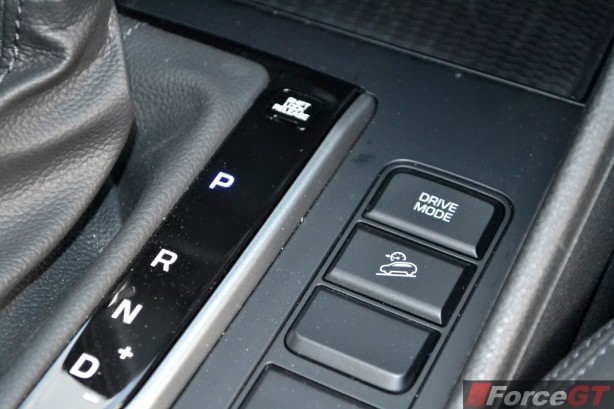 It’s a shame that the above advanced safety features are only available on the range topping Highlander and no even offered as an option on cheaper variants. The sound system is another area needing some serious rework, as even in the Highlander, it is mediocre.

While keen drivers will find the entry-level Tucson’s engine and steering’s lack of verve a disappointment, most of the car’s target buyers will find pleasure in the way the Tucson goes about its business smoothly and comfortably.

Not surprisingly, our picks are the all-wheel-drive, turbocharged petrol and diesel pair for their enhanced performance and drivability.