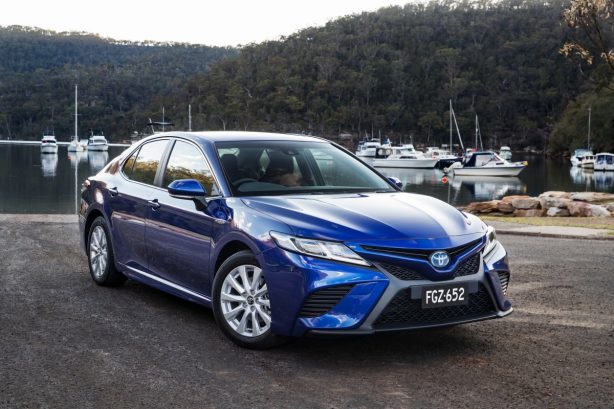 Toyota’s new-generation Camry sedan has undergone a dramatic redesign from bumper to bumper that results in the sportiest and most aggressive looking Camry in its history.

Spanning eight generation, the first all-new Camry in 7 years also represents a new era for Toyota in Australia – the first time in 30 years that Toyota has offered a fully imported Camry range (from Japan) to the Australian market as a result of the company’s closure of local manufacturing last year. 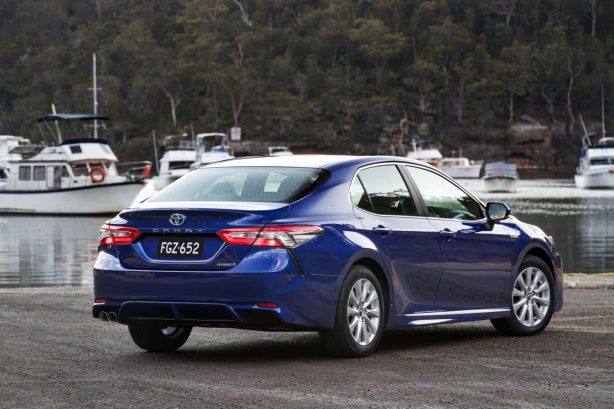 We have sampled the entry-level 2.5L Ascent and the upper-spec 3.5L V6 SX last year where we were impressed by their ride and handling balance, quality and value. The V6 was, in particular, nudging on sports sedan performance.

But the most popular model in the range is the hybrid, and that’s what we are taking a closer look at in this review.

Insights into the Camry’s design, interior and quality have already been covered in the two previous reviews which can be found here and here. The focus here is on the hybrid’s performance and driveability, which begs the question how well does the Camry’s new hybrid drivetrain pair with its remarkable and also new underpinnings? 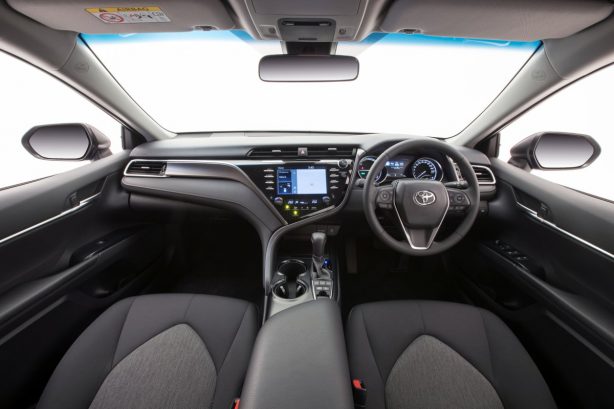 Before we dive into that, let’s look at the specs. We were given the keys to the mid-spec Ascent Sport which, at $31,990 plus on-road costs, is a $1,200 reduction over the previous hybrid model in an equivalent trim. In the bigger scheme of things, the same coin will only get you into a base-spec Mazda6 or Subaru Liberty. This means the Camry is good value and it’s all spelled out in the spec sheet.

You get the same sport exterior treatment as the upper-spec SX and SL models which includes a sharper grille, bolder front and rear bumpers, and side skirts. This is paired with 17-inch alloy wheels, LED headlights and daytime running lights, auto high-beam and keyless entry. 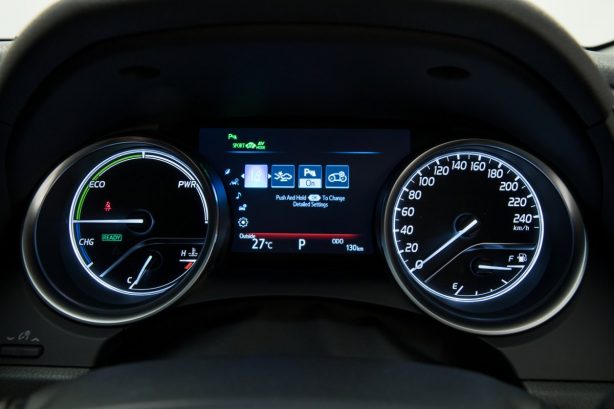 Inside, satellite navigation and dual-zone climate are standard, so is a powered driver’s seat. You also get the better quality steering wheel and gear shift from the SX/SL upper spec models.

It’s not without its qualms though, as Apple CarPlay and Android Auto are missing. It’s a small gripe in an otherwise impressively equipped package. 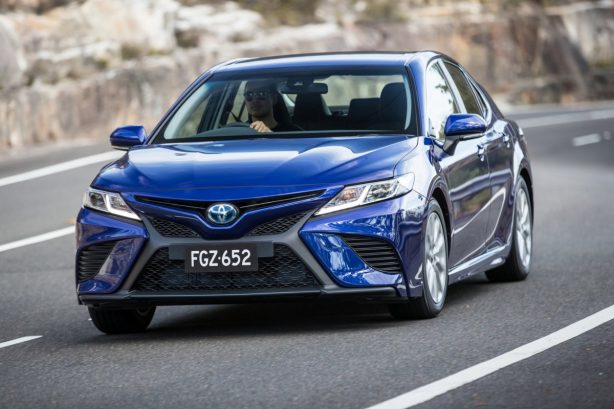 The Camry’s hybrid system is all-new according to Toyota and combines a 2.5-litre four-cylinder direct-injection petrol engine with lighter, smaller and more efficient battery pack and electric motor. It produces 160kW of combined power and 221Nm of torque. Normal, Eco and Sport driving modes can be engaged even in electric-only (EV) operation.

The new packaging means the batteries are now located under the rear seat instead of under the boot. The result is uncompromised boot space, which at 524 litres, are identical to non-hybrid models. 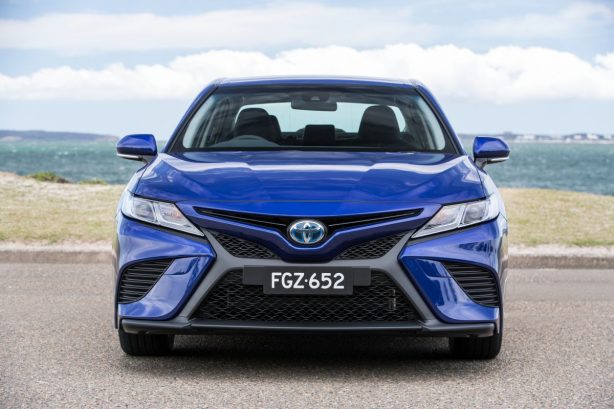 Toyota has promised that the latest Camry is the sportiest ever and this includes the hybrid. Have they delivered? From the perspective of a economy-focused family sedan, they have. The hybrid drivetrain offers plenty of go from the get go thanks to the strong torque from the electric motor the moment you floor the right pedal, delivering relatively lively electrically propelled acceleration (for a family sedan). The transition from electric only to petrol-electric as you press on is also impressively seamless.

While the CVT automatic the engine is hooked up to isn’t anywhere near sporty to drive, it’s entirely suited to the fuel-saving nature of the hybrid Camry, operating smoothly and discretely in the background without bringing attention to itself. It features new sequential shift that provides access to six ‘ratios’ via the shift lever or paddle shifters, handy when overtaking.

The self-charging system replenishes the battery every time the car coasts or brakes, which brings an artificial brake feel typical of hybrids, not helped by an overly sensitive initial pedal response. 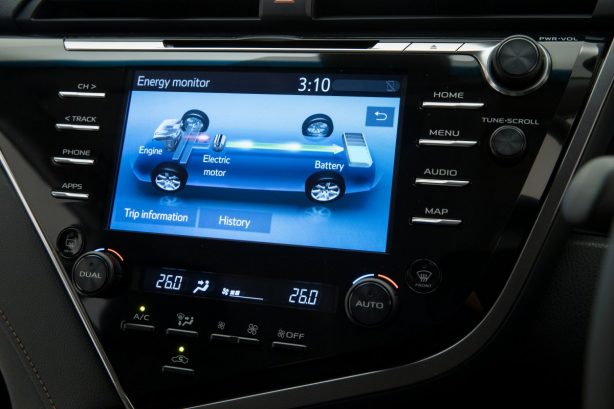 Underpinned by the Toyota New Global Architecture (TNGA) that is 30 per cent stiffer than the old platform, the new Camry feels light and responsive for a car of its size. It’s not overtly sporty but it isn’t shy in tackling corners, with a new-found level of dynamism and stability that will come as a surprise to many.

And best of all, the hallmark Camry ride comfort is still intact, with the mid-size sedan soaking bumps and ruts with aplomb. The Camry is still one of the most comfortable sedans in its class.

But the most important assessment and buying factor of a hybrid car is its fuel economy, and we are glad to report that the new Camry hybrid has managed to impress with a real-world tested average of 5.1L/100km against the brochure’s 4.1L/100km. Considering we often had close to a full load over our week-long test, that’s a mightily impressive figure. We also notice that, unlike non-hybrids, there’s little difference in fuel use between driving around town and in country, with our daily commute in choked urban roads using around 5L/100km, which is again very thrifty.

With previous generations of the Camry, going hybrid meant trading boot space and driving experience for savings at the bowser. Not anymore with the new Camry hybrid. The combination of space, ride/handling balance and efficiency not only makes the hybrid model the one to pick in the range but also a compelling choice in the mid-size sedan segment.