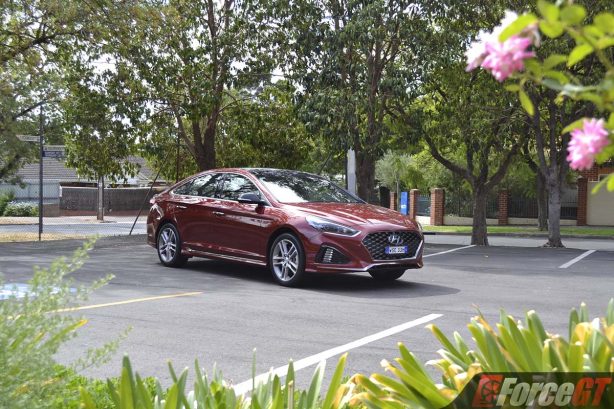 It seems like only yesterday when the new Hyundai Sonata was released but here it is again in 2018, receiving its first major facelift.

With traditional sedans fast becoming as fashionable as a blancmange these days as consumer tastes shift to SUVs, there are still a significant number of us who prefer the good old fashion sedan that we grew up in.

2018 has also brought some fresh competition in the form of the vastly improved Toyota Camry, while the Mazda6 is also set to gain some significant update this year. So it’s not surprising Hyundai has leapt into action by introducing a refreshed Sonata.

The model line up has been streamlined for Australia, with the local arm dropping the Elite variant, offering only the Active and Premium models. 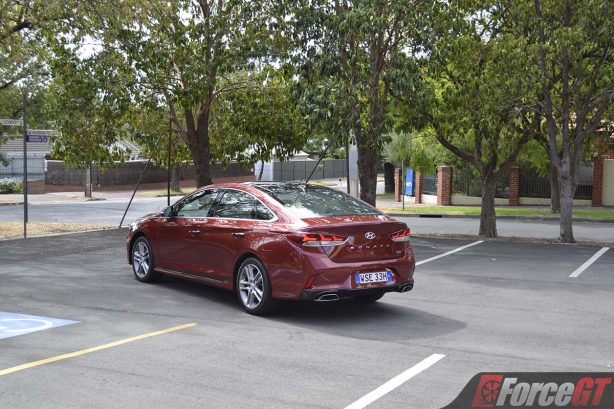 Tested here is the 2.0-litre turbocharged Sonata Premium which is priced from $45,490. The entry-level Active, with its less powerful 2.4-litre naturally aspirated four-cylinder petrol and pared back specification, is a significant $15,500 cheaper.

Hyundai wanted to make an impact with the 2018 Sonata and it is most obvious in the Premium trim, starting with the company’s signature Cascading Grille that now adorns the car’s nose and flanked by a pair of new and more streamlined headlights with black bezels. Further down, the reshaped front bumper houses a chiselled airdam and a pair of vertical Daytime Running Lights.

Side on, the car’s ground hugging effect has been enhanced with a pair of side skirts but it’s at the rear where most of the drama takes place. The bootlid has been reprofiled to highlight the Sonata’s fastback silhouette while the LED taillights get Lamborghini-inspired graphics for a more premium look. The number plate has also migrated down onto the restyled rear bumper with integrated diffusers and sandwiched by a pair of chrome exhausts.

Along with fresh 18-inch alloy wheels and the discrete use of chrome in various places, the 2018 Sonata Premium lives up to its name with a decidedly more upmarket look. 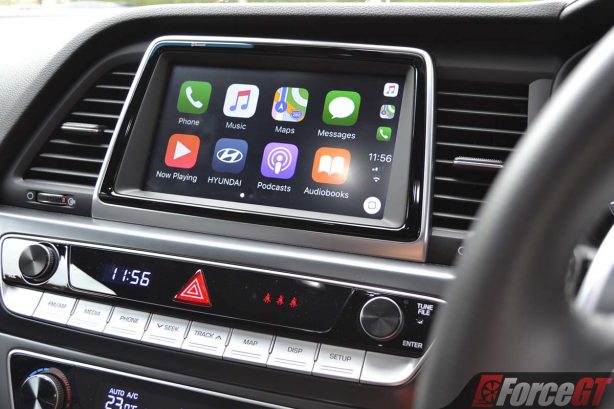 Not as dramatic but still significant nonetheless, the Sonata’s interior gains Apple CarPlay and Android Auto, a new three-spoke steering wheel, as well as wireless Qi mobile phone charger. The switches and buttons for the climate control have been given a gloss black ‘piano key’ finish, while the chrome audio controls and aluminium-trimmed pedals go some way toward justifying the car’s price tag.

The infotainment system is easy to operate although satellite reception on the built in sat-nav (now standard across the range) is a little iffy sometimes. The sound from the unbranded speakers isn’t very good, either and there is no digital radio which is poor.

The Sonata’s ergonomics are good, though, with most controls within easy reach. Build quality is also excellent, as you would expect from Hyundai these days. However, you better be a fan of dark grey interior as the cabin is flooded with it, from the dash to the carpets and headlining. I personally don’t have an issue with it as it makes the interior feels sportier but some might find it depressingly dull. 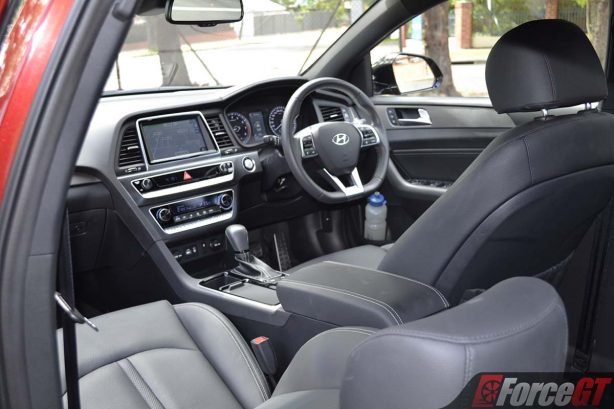 The Sonata’s vital dimension remains unchanged for 2018, that means it still boasts a handy 510 litre boot, which is larger than the new Camry’s 493 litres despite carrying a full size spare wheel. We also think Hyundai’s Smart Boot feature (stand behind the boot for around 3 seconds with key in pocket) is superior to the hit-and-miss foot waving types favoured by most other manufacturers.

The heated and ventilated (front) seats are comfortable and the interior feels relatively roomy with good all round visibility. There are two ISOFIX child seat mounts at the back and retractable door blinds (Premium-only) to protect the precious ones from the harsh summer sun.

The Premium’s 2.0-litre turbocharged four-cylinder petrol makes the same punchy 180kW at 6,000rpm and 353Nm of torque from 1,350rpm through to 4,000rpm as before but is now paired with a new eight-speed automatic transmission that is gradually being rolled out across the Hyundai/Kia empire.

It is a smooth and quick shifting unit with four self-explanatory drive modes – Eco, Comfort, Sport and Smart. Each drive mode alters the engine, steering and transmission characteristics. We left it in Smart mode most of the time on test as it works out the best combination to suit our driving style and road conditions. 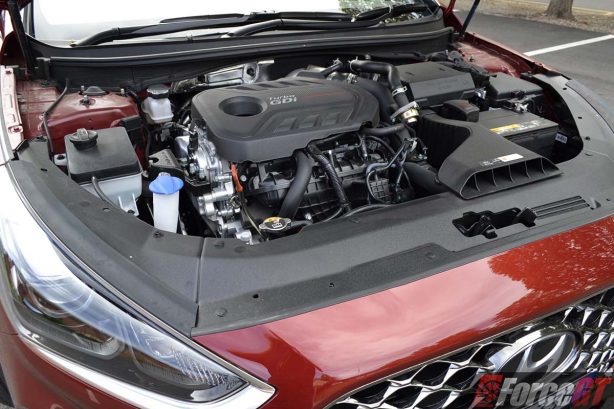 Out on country B-roads, Sport mode works best as it helps the engine come alive by sharpening the throttle and holding gears longer for a sportier feel, although it loads up the steering with unnecessary weight.

Hyundai knows a thing or two about car dynamics these days and the Sonata shows. There’s good body control and a decent amount of grip from the Michelin Pilot Sport 3. And despite its size, it feels relatively agile as long as you don’t place unreasonable demands on the chassis. It’s not as sporty as the Mazda6 or even the new Toyota Camry but it’s unlikely to be a priority for most of its buyers.

In the city, the Sonata is relatively refined with little engine and road noise intrusion (except on coarse chip bitumen), and most will appreciate its compliant ride quality. 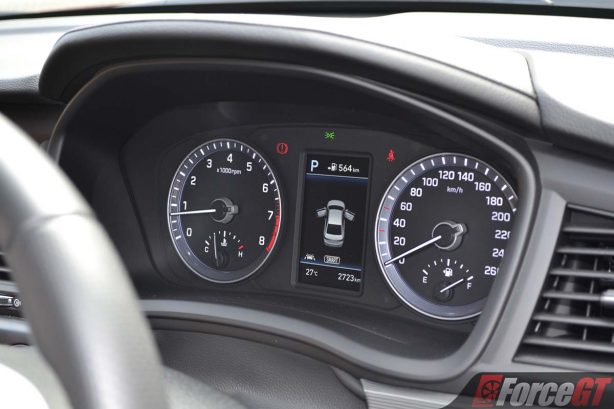 Thanks to the Premium’s new automatic and despite the lack of automatic engine stop/start, its official figure is 0.7L/100km better than before at 8.5L/100km. This is not far from our tested average of 9.2L/100km of mostly urban and country road driving with about 30 per cent spent on the freeway.

On the safety front, while most of the Sonata’s main rivals have AEB as standard, the life saving feature is surprisingly not available on the facelifted Sonata.

But aside from this oversight, it does come with the usual arsenal of six airbags, ABS and traction and stability control. Our Premium model adds driver fatigue warning, blind-spot detection, lane guidance, lane departure warning, rear cross-traffic alert and active cruise control with downhill braking.

Hyundai has successfully tidied up the Sonata’s styling and brought it up to date with the latest infotainment technologies. The Premium also gets a big tick for its punchy turbo engine that runs on regular unleaded fuel.

It’s comfortable, spacious and handles decently but it’s a shame the turbo engine is not available in the cheaper Active and neither model gets Autonomous Emergency Braking.