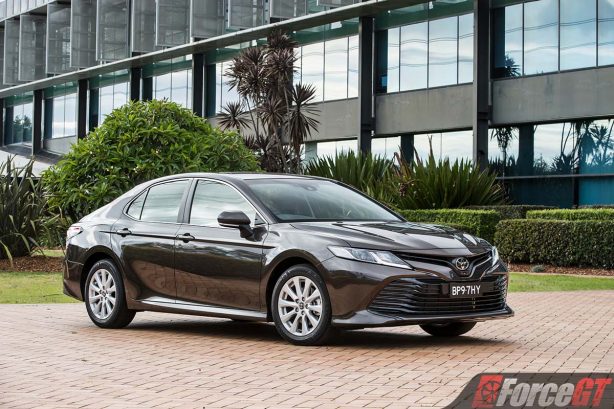 The eighth-generation Camry represents a new era for Toyota in Australia in more ways than one. For a start, it doesn’t look like your grandmother’s favourite cardigan anymore and is the first fully imported (from Japan) Camry in Australia for nearly 30 years.

Toyota has also sharpened the Camry’s pricing, with six of the nine variants getting a modest price reduction, while the other three copping at least a $1,200 increase, which Toyota says is offset by additional features such as autonomous emergency brakes and LED headlights that are standard across the board.

Built on the all-new Toyota New Global Architecture (TNGA), the 2018 Camry has undergone the most daring transformation in its history but has lost none of the practicality, comfort and quality that its legions of supporters have come to expect and love.

Re-skinned from bumper-to-bumper, the TNGA – which made its debut in the Prius – allows designers greater freedom, resulting in a more athletic profile with a lower roof and bonnet, a 50mm longer wheelbase, a better driving position and genuinely improved dynamics.

It is, to our eyes, the most handsome Camry to date with excellent proportions and detailing, and that includes the relatively staid entry-level Ascent model with 17-inch wheels tested here.

All variants feature a Lexus-esque front fascia consisting of a dominant lower grille flanked by a pair of slender LED headlamps with LED daytime running lamps. The car’s sharp shoulder line picks up the door handles before drawing your attention to the blistered rear haunches that conveys the new Camry’s athleticism.

Its profile is sleeker, too. The designers have been able to reduce the car’s overall height (-25mm) without sacrificing interior space by lowering the hip points, and therefore seating positions, while the large windows assist outward vision during parking and manoeuvring.

What impresses most is the luxurious interior that, again, clearly inherits its quality and design flair from its premium stable mate. The dashboard, instrument panel, centre console and door trims all employ padded plastics and premium materials. Quality stitching at various touch points adds a touch of craftsmanship to the sporty interior, too.

The dramatic sweeping and intersecting centre console houses an easy to use 7-inch colour touchscreen with Toyota Link connected mobility, and, a thumping 8-speaker sound system that is one of the best stock systems around. This is backed up by clear Optitron instruments and a 4.2-inch multi-information display in front of the driver.

Interior ergonomics are good, too, with everything where you expect them to be. The electric handbrake that engages and disengages automatically when you shift into and out of Park is not only a great feature, but liberates plenty of room in the centre console bin.

However, scrimping on sat-nav is poor and Apple CarPlay and Android Auto are still glaringly amiss. There is also just one USB port and one 12V socket in the entire cabin, and the polyurethane wheel and gear lever are a bit of a low point given the premium cabin.

Happily though, Toyota has finally settled its differences with the voice control lady as she is back in business and will happily dial the number you ask without a single protest! 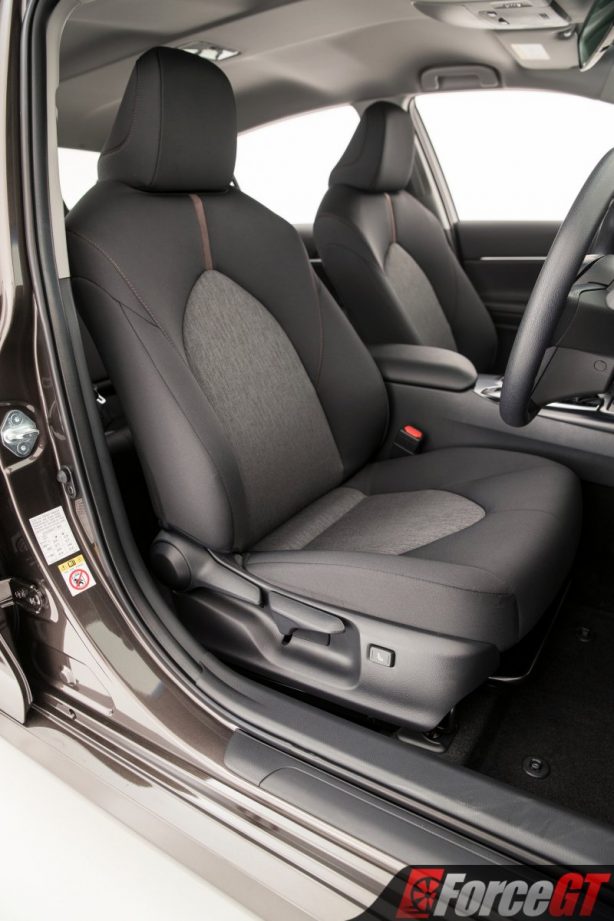 As you’d expect from a Camry, the seats are lounge-like comfortable and the driver gets electric lumbar and manual height adjustment, although the front seat passenger misses out on both. There are rear seat air vents to keep your passengers fresh, along with generous leg and shoulder room.

The 60/40 split rear seats tumble forward to expand on the 493-litre boot, though you’ll have to peel yours eyes for the latches. It’s the smallest in the range, too, thanks to a full-size spare. Others in the line-up gain an extra 31-litre via a space saver spare.

The Ascent’s carried over 2.5-litre direct-injected 4-cylinder petrol engine is nothing to write home about. It generates 133kW of power at 6,000rpm and 231Nm at 4,100rpm and is married to a revised 6-speed automatic with Drive Mode Select and auto-blipping (on a Camry!).

It’s programmed for efficiency more than outright performance and will slip into the highest gear at the earliest opportunity to the detriment of responsiveness. When going up an incline, the gearbox constantly second guesses itself by dropping gear and then upshifting again. The only way of alleviating the situation is to flick the gear lever into manual mode to hold a gear. 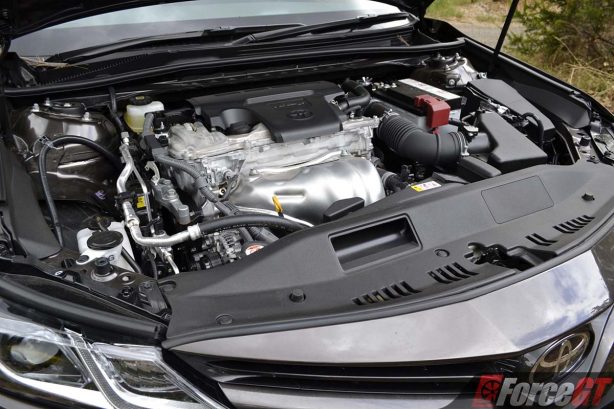 However, once settled, the engine purrs away effortlessly with, again, Lexus level of refinement. Wind and road noise are sealed away effectively outside.

Combined fuel consumption is rated at 7.8L/100km but real world consumption sees it climb to 8.5L/100km with around 80 percent spent in the urban commute.

The new Camry is also the most dynamic iteration of the nameplate to date, its new suspension, dampers, steering and brakes give the car genuinely improved handling and precision.

In addition, the new car also has a range of aerodynamic features to further boost handling stability, including aero stabilising fins on the leading edges of the front quarter windows, the rear LED combination lamps and in five locations on the under-floor covers.

It’s not overtly sporty but it isn’t shy in tackling corners. There’s good composure and turn-in is crisp, even on our taxi-spec model with 17-inch wheels and comfort-biased suspension. The chassis feels responsive, while the steering is precise and well weighted albeit a little numb.

Strangely, there are no parking sensors in the Ascent, not even rear sensors. Automatic climate control has also fallen victim to cost cutting with manual air con taking over its place.

There is no reason why the new imported Camry shouldn’t continue the success of its locally made predecessor.

It’s immaculately built, supremely comfortable, spacious, practical, and exudes an air of premium-ness not seen before in a Camry.

This is further boosted by its reputation for reliability and resale, plus Toyota’s capped price servicing plan capped at $195 per visit for the first five years or 75,000km, whichever comes first.