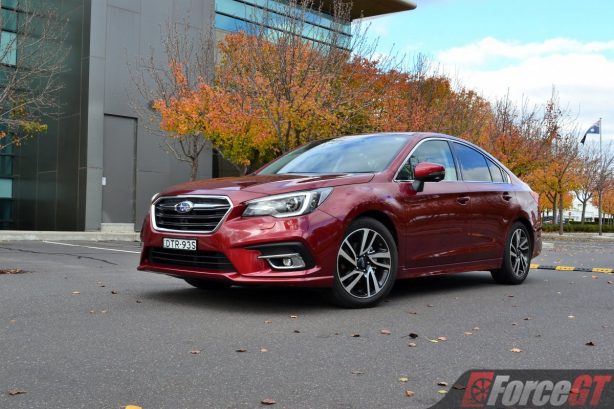 The Subaru Liberty has long established itself as a safe, sensible and dependable family sedan. Introduced in the 1980s, it became a household nameplate for many Australian families before the SUV boom came in and shifted things around. Nevertheless, the Liberty has retained the same formula through the generations, one that offers honest, unsophisticated and reliable A to B transportation for the family.

For 2018, Subaru has given the current fourth-generation Liberty, launched in 2014, a little nip and tuck to keep it relevant in the increasingly competitive mid-size sedan market.

With an unchanged entry-level pricing of $30,240 plus on-road costs, the new 2018 Liberty gains update to its exterior which sees its front grille widened and sharpened with bolder styling elements. The bumpers, too, have been restyled, so are the headlights and wing mirrors, the latter tucked in further to reduce wind noise.

Wrapping up the exterior update are new style 18-inch alloy wheels which are standard feature across all variants.

The mild facelift brings the Liberty a little closer to current times but the design remains conservative and anonymous, with nothing offensive or radical about the typical three-box sedan shape. 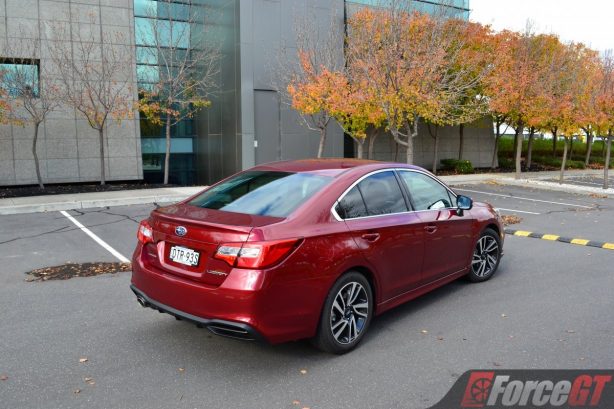 The Liberty’s interior gains a larger 8-inch central touchscreen display (in 2.5i Premium and 3.6R variants) that features a new generation infotainment system. It’s one of the easiest systems to navigate around with intuitive menu structure and large buttons.

Satellite navigation is standard for the larger screen in the two upper-spec models, but not offered in the base 2.5i variant’s smaller 6-inch screen. Both systems feature Apple CarPlay and Android Auto connectivity, though sadly DAB+ digital radio is yet to be included.

Elsewhere in the updated cabin, there is new instrument panel stitching and newly designed steering wheel. The latter features buttons finished in gloss black for a more premium look but it seems like Subaru can’t have enough of them buttons as the steering wheel is literally littered with them. Not that they are all needed as the drive mode buttons in the 3.6R, for instance, can be combined into just one button.

Flashy piano black trim can further be found in the centre console and door trim, but the neatest update is the new climate control knobs, which incorporate little digital displays in them in a similar approach to those found in an Audi. 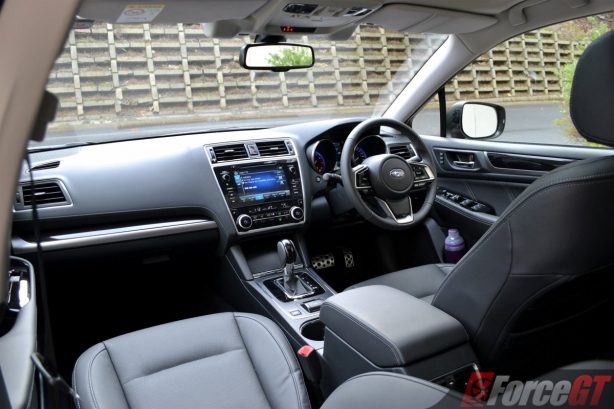 The Liberty’s cabin is one of the more spacious in class, with generous head and legroom for all occupants. And don’t think boot space has been sacrificed for extra cabin room as there is a sizable 493 litres of cargo capacity out the back, more than many mid-size SUVs. The boot is flat and square, so it’s very usable.

The 40/60 split folding rear seats can be dropped to expand the boot space even further, and with them tumbled there is even enough space for two 1.8m industrial ladders. We know because we tried it out.

There is no lacking of storage compartments around the cabin too, with dual cup holders at the front center console and in the back seat flip down armrest, plus deep bottle holders in all four doors.

In today’s digital world, there are never enough of USB ports to power our mobile devices, especially in a vehicle. In addition to the USB port at the front, two extra USB ports have been added to the back of the center console for the convenience of rear passengers.

One constant complaint we received from rear passengers during our test was that the rear doors took some effort to close shut, which could be a problem for children who frequent the back seats.

Like the exterior, there is nothing to shout about the Liberty’s interior design. It’s all fit for purpose and that’s about as interesting as it gets. Nevertheless, the fit and finish is impeccable and everything feels like they will last a long time. 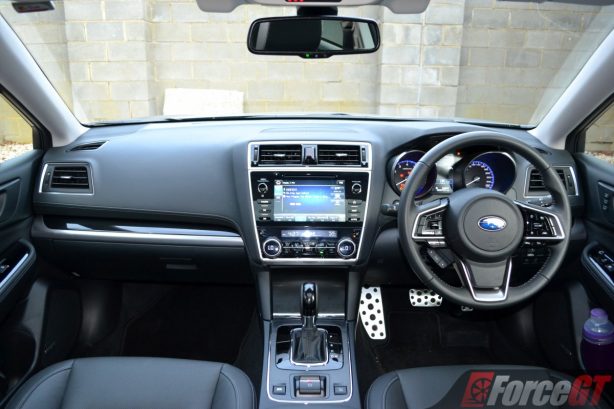 Subaru’s driver assist system is able to recognise brake lights in the vehicle ahead and as such, features one of the best adaptive cruise control systems in the business. Its response is quick and almost never nervous, even when dealing with cut-ins.

Both the upper specs 2.5i Premium and 3.6R come standard with a sunroof, electric adjustable driver and front passenger seat, heated front seats, leather trim and LED headlights, with the latter also featuring a punchy harman/kardon 12-speaker sound system including sub-woofer and the addition of a Sport# drive mode. 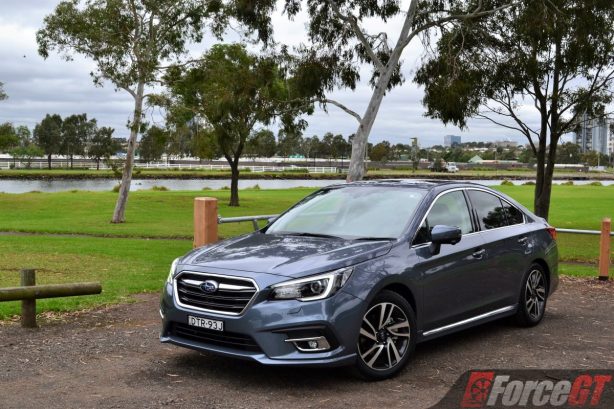 Carried over from before, the Liberty’s four and six-cylinder boxer engines continue to displace 2.5-litre and 3.6-litre respectively, but thoroughly refined with updates to their crankshaft, intake and exhaust valves, alternator and crank pulley for improved refinement and efficiency. The 2.5L engine produces 129kW @ 5800rpm and 235Nm @ 4000rpm, while the 3.6L unit develops 191kW @ 6000rpm and 350Nm @ 4400 rpm. Both engines drive through Subaru’s symmetrical all-wheel drive system paired with CVT automatic, with the 2.5i also featuring idle stop/start that is not at all intrusive and can be regulated with the brake pedal (press harder to activate).

Without turbocharger, the engines are a little behind the times compared to the competition. Despite lacking the low down torque of turbo engines, the smaller 2.5L engine is a smooth unit with more than enough power to cope with the daily grind expected of a family sedan. It just needs to be worked a little harder when the going gets tough, which it will happily obey. The larger 3.6L unit is even more refined than the four-pot and has plenty of go for effortless overtaking.

If towing is undertaken on a regular basis, the larger of the two engines is also the way to go. The six-cylinder’s stronger torque makes hauling that much more manageable with a 1800kg braked towing capacity, 300kg more than the 2.5i could manage. 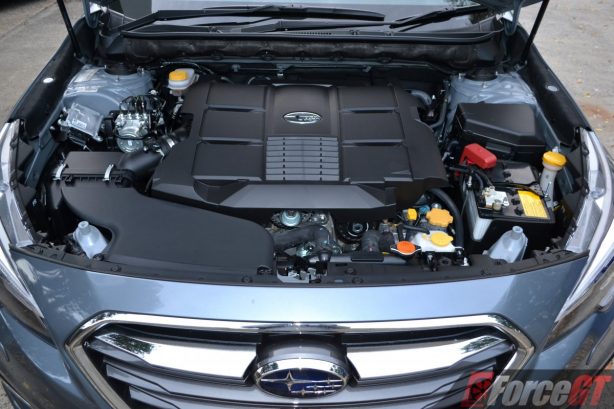 While lacking the connected feel of conventional torque converter or dual-clutch automatics, the liberty’s CVT is relatively smooth and muted in its operation. It’s one of the better ones out there that doesn’t draw attention to itself in normal driving. Under a full throttle, the CVT introduces virtual ‘gears’ for more linear acceleration feel and less rev flare – the very unpopular ‘rubber band’ feel attributed to transmission of this type. We do, however, find that there is a moment’s delay before things are slotted into place when shifting from drive to reverse and vice versa.

The Liberty’s most unique selling point is its all-wheel drive system which is standard on every model. It endows the car with superb traction in any road condition. In the wet, you get a strong sense of assurance and the kind of sure-footed and safe handling that you don’t normally get in front-wheel drive rivals. The 2018 update extends to the Liberty’s suspension, which has been revisited and tweaked for greater refinements and response. Most times, it’s a tidy handler but you will get hints of understeer if you rushed things and the steering isn’t quite as sharp as that in the Mazda6 or Volkswagen Passat. On the other hand, the brakes, which have been refined for improved pedal feel, impresses with good progressiveness and bite. 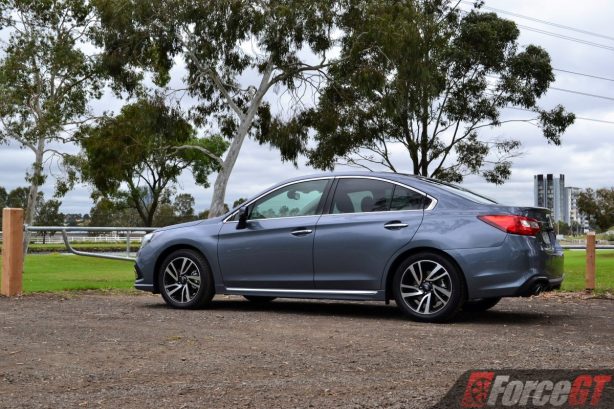 On the freeway, the Liberty is quiet and refined, with the CVT keeping revs low at most times, which contributed to a respectable average fuel consumption figure of 10.2L/100km in the six-cylinder 3.6R, not far off its rated 9.9L/100km figure. In contrast, the 2.5i returned a relatively thirsty real-world fuel use of 9.4L/100km against a claimed 7.7L/100km.

The Liberty requires servicing every six months or 12,500km, more frequent than many rivals which require visiting the workshop only once a year or every 15,000km. Subaru’s warranty program isn’t the most impressive, either, spanning three years/unlimited kilometres when some rival brands are offering five or even seven years.

The 2018 Subaru Liberty impresses with a long list of safety features, spacious cabin and assuring all-wheel drive handling. Like all the previous generations, the latest Liberty makes for a good and dependable family sedan, just don’t expect it to be particularly sporty to drive or look at.