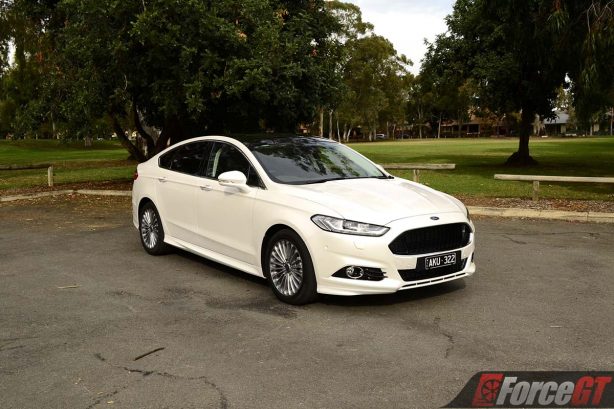 It seems like only yesterday I reviewed the current-generation Ford Mondeo, but Ford has already given the car a mild facelift to keep it fresh in 2017.

While it may not sell in the numbers of a Mazda 6 or Toyota Camry, according to Ford, sales of the Mondeo have increased 43 per cent in 2016 compared to the year before, and in 2017, the Mondeo commands a 9.3 percent VFACTS segment share – ahead of rivals such as the Volkswagen Passat and Subaru Liberty.

There’s nothing that needs fixing in the fourth-generation Mondeo and perhaps that’s why Ford has adopted a ‘less is more’ approach with the 2017 model. Besides a range of better looking and larger alloy wheels (by an inch) and a new ‘Metalicious’ silver paint, the facelifted model is pretty much the same as before. That means practical five-door hatch or wagon body styles, with the same starting price of $37,190 for the entry-level Ambiente, $37,290 for the mid-range Trend and $44,790 for the range-topping Titanium – all excluding on-road costs. 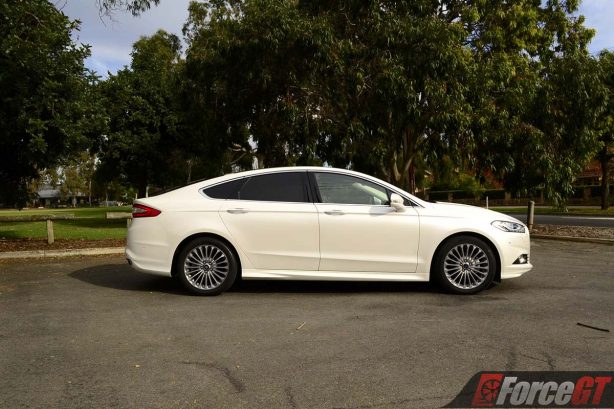 Being the top dog, the Titanium receives the bulk of the upgrade, including bold new 19-inch alloy wheels (replacing the old 18-inch) wrapped in lower-profile 235/40 Continental tyres, blacked-out grille, panoramic glass roof, LED running lights and dynamic front LED indicators, making it the most prominent of the range. Other minor exterior tweaks include restyled front and rear bumpers.

While the Mondeo’s exterior styling has remained sharp with its Aston Martin-eque corporate front grille, its interior is comparatively dated in overall feel and look. The revamped centre console (now with less clutter) is a step in the right direction but falls short of improving the situation. The infotainment screen remains a sizeable 8-inch but the “brains” behind it has been upgraded to Ford’s latest SYNC3 system, highlights of which include: 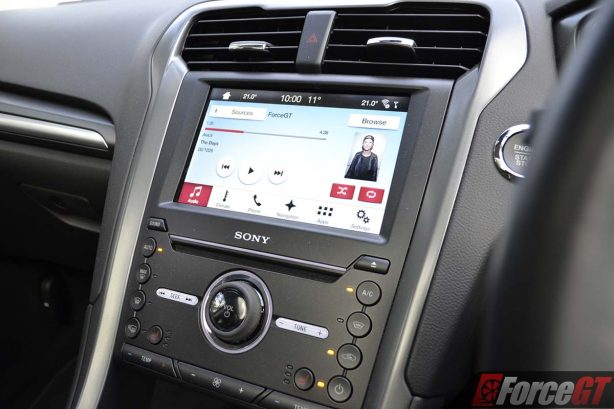 The system is easy to use on the whole although it took a bit of effort to pair the Bluetooth to my phone and once paired, it also refuses to reconnect on a number of occasions. But once connected, you can stream your music directly from your phone and even go through your playlist for your favourite tunes.

Our range-topping Titanium features a crisp and easy to use, partially digital instrument cluster with a vast range of detailed functions, from trip computers to an array of driver assistance features. Active City Stop with pre-collision assist and pedestrian detection is now standard on both the Trend and Titanium, but unavailable on the entry-level Ambiente.

The electrically-adjustable leather seats are wonderfully comfortable, with good support and memory function that remembers the seats and mirror settings. The driving position is also good, with all controls falling easily to hand and good all round visibility despite the lack of rear cross-traffic alert. 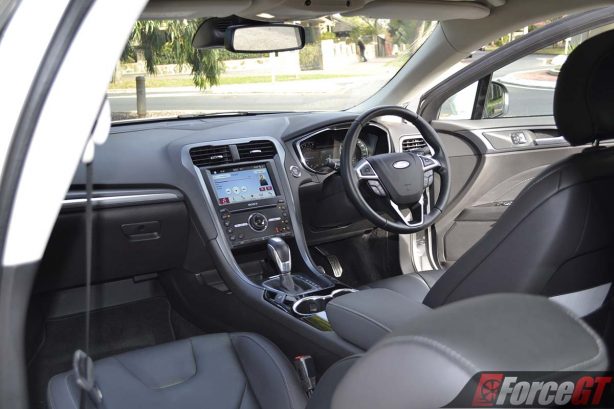 While front seat occupants get decent headroom, taller adults might feel slightly short-changed at the back due to the sloping roof and headroom-robbing sunblind for the panoramic roof. The middle seat passenger also has to contend with the small rear floor hump but is compensated with rear air vents, a 12-volt outlet, map and pockets, but again misses out on seat heating (outboard passengers only).

Like most of its rivals, the Mondeo’s cabin materials are mostly nice and soft, although fit and finish are still not quite Mazda 6 or VW Passat level yet but pretty good for a Ford. When the sun sets, the mood lighting baths the interior in soothing pale blue light for that lovely premium feel.

The Mondeo’s dimensions make it a very practical family car. There are plenty of storage options around the cabin, too, including big door pockets, a sizeable glovebox and large centre storage bin under the armrest with SD card and USB inputs. Its boot is equally massive at 557 litres (larger than the Mazda 6 wagon’s 506 litres) and comes with a large opening aperture that pops open at a touch of a button.

While the sexier Ford Mustang has been criticised for its less-than-impressive safety, the Mondeo is a five-star ANCAP crasher, with a plethora of airbags that includes curtain airbags, driver’s knee airbag and two rear seatbelt airbags. It also comes standard with lane-departure warning, lane-keep assist and blind-spot monitoring, while the child lock is conveniently located on driver’s door along with the power window switches, not the old school key in the inside of rear door rubbish. 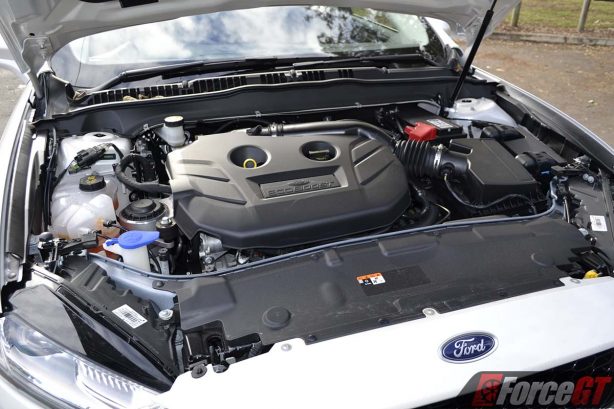 Our Titanium is motivated by a 2.0-litre EcoBoost turbocharged petrol engine producing 177kW of power at 5,300rpm and 345Nm at 2,300 to 4,900rpm. It is married to a smooth shifting 6-speed automatic transmission driving the front wheels.

The EcoBoost mill is generally effortless and refined but can be a tad jerky when cold, especially in the morning. Its fat mid-range means you won’t be left in strife when overtaking slower vehicles on country roads.

Its steering wheel-mounted paddle-shifters might bring out the boy racer in you but its performance won’t trouble any of the current raft of hot hatches in a straight line.

And unlike most modern day front-wheel drive hot hatches which put power down better than a taking off A380 jumbo jet, there is quite a bit of wheel spin in the Mondeo even in the dry. In the wet, this turns into annoying axle tram, making the car a handful if you are not judicious with your throttle application in first gear.

Its cabin is generally hushed, with road and tyre noise well suppressed, and when you do hear the engine (above 3,500rpm), it has a nice solid tone to it.

Like the pre-facelift model, the 2017 Mondeo comes with decent dynamics. It is poised around the corners and supremely comfortable on the freeway. While I would prefer a little more feel from the well-weighted and reasonably precise steering, the Continental ContiSportContact 5 235/45 R18 tyres do stick to the road well (besides the occasional tyre scramble mentioned above). Its brakes are progressive with good and consistent brake pedal feel.

The Titanium is also equipped with standard adaptive dampers with Normal, Comfort and Sport, each altering the ride firmness, steering weight, throttle response and gear mapping for an even more tailored drive. Normal and Comfort work best around down, ironing out most bumps and ruts with ease, while Sport is pleasingly taut for handling country B-roads.

Strangely for a modern day petrol engine, the Mondeo’s EcoBoost does not come with stop/start technology. We averaged 10.7L/100km on the combined cycle with a mixed of urban and freeway driving, more than 2.0L/100km above Ford’s official figures – making it one of the thirstiest in its class. Happily though, the big Ford only requires the cheaper 91 RON.

The Mondeo is one of the most understated mid-sized sedans in Australia.

While it may not be as sharp as class benchmark, the Mazda6, or as classy as the new Volkswagen Passat, it is a handsome and superbly comfortable cruiser that would happily munch away at the miles.

It’s also high in practicality with one of the largest boot area of its class and a spacious – albeit dated – interior.

It’s not hard to see why Aussies are gradually warming up to what is essentially a Ford Falcon replacement model.