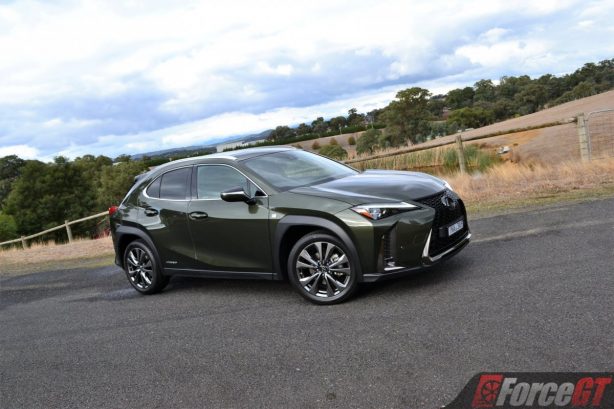 Lexus may have been a late comer to the increasingly hot urban luxury crossover market but its arrival is certainly not a quiet one. The all-new Lexus UX is the Japanese luxury marque’s smallest and most affordable SUV offering targeting the younger crowd, many of whom stepping up to the luxury market for the first time and new to the Lexus brand.

As such, the UX is not going to have it easy, having to go up against established rivals from – you guessed it – the German trio which is made up of the BMW X2, Mercedes-Benz GLA and Audi Q2. Not only that, the UX also has to compete with two also late but not so late players – the Jaguar E-Pace and Volvo XC40.

The three-tier UX range starts at $44,400 plus on-road costs, undercutting all rivals bar the Audi. It’s also the most affordable of all Lexus models other than the CT 200h hatch.

So, has the baby Lexus got what it takes to put up a good fight? Let’s find out. 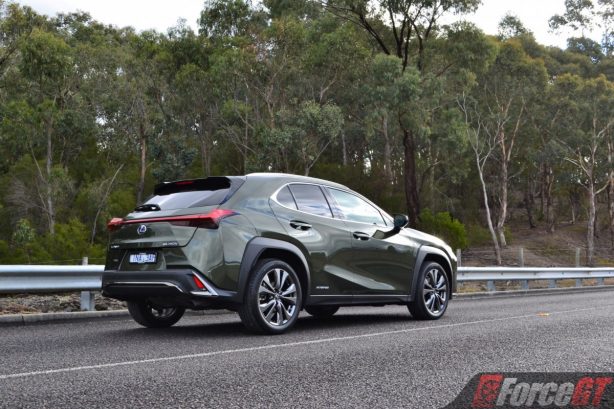 Lexus’ divisive, like it or hate it design language has now been deployed to the entire line-up and the UX is no exception. This means all the Lexus design hallmarks are there including the aggressive spindle grille, L-motif obsessed lighting signature and bold lines and creases all around. Typical of this brand, the details are delicate and require some up close and personal time to appreciate, but my favourite is the single piece LED taillight that stretches the entire width of the car. At night the slim, straight and continuous red lighting it creates is by far the coolest design feature I have seen on a mass production car for a long time.

Like most of the company’s current models, the styling is bold and unique, some very important attributes to have if the UX was to capture the hearts of young buyers. 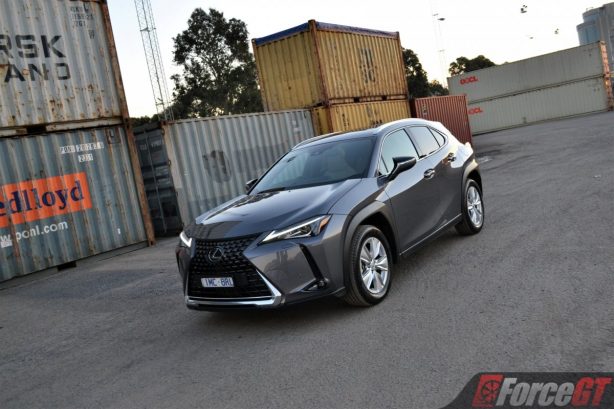 I sampled both the range-opening UX 200 Luxury grade and the mid-spec UX 250h F Sport, and while the former still looks good for a base model the smaller 17-inch wheels with their bland design just didn’t do it for me. The F Sport trim on the other hand is so much better on the eyes with those attractive 18-inch rollers and sporty touches around the front and rear bumpers.

That said, I still have not warmed up to the new dark green colour called Terrane Khaki that was on the F Sport I drove, but that’s just me preferring more conventional colours like the Mercury Grey on the Luxury. 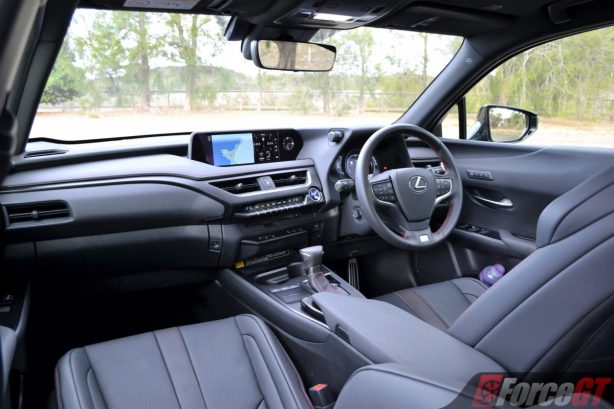 I’m going to say the interior design of the UX is the best I have seen from Lexus, discounting the LC coupe and LS sedan flagships, of course. It’s also one of the best in the segment. The driver orientated cockpit is a breath of fresh air for the brand which has not have a driver focused interior in a non-niche model for as long as I can remember.

From the driver’s seat, you do feel a sense of connectedness with the car thanks to the angled centre console and LFA-esque instrumentation binnacle with the two stalks protruding from either sides. The thick rimmed steering wheel falls to hand nicely and those snug F Sport front pews are just some of the most comfortable and supportive seats I have come across, not to mention the best in class.

And if the red accented F Sport cabin doesn’t look lively enough for you, opt for the White Ash colour combination like what’s fitted to my UX 200 Luxury tester (at no extra cost). The bright white seats may not make the most sense when it comes to practicality and maintenance but boy do they look absolutely fantastic. 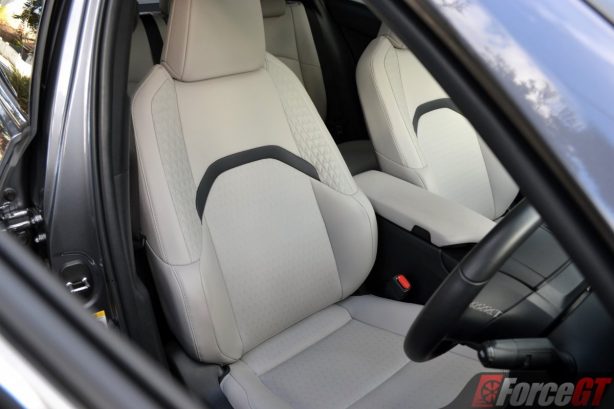 Every UX comes standard with the centrally-mounted 10.3-inch infotainment screen, which is one of the biggest in class. The high-res screen delivers ultra crisp graphics, which together with the equally vivid and also standard fit digital instrumentation LCD screen, endow the cabin with a suitably high-tech feel.

It’s just a shame that the centre screen operates through Lexus’ tedious remote touch interface, which is essentially a touch pad to control an on-screen cursor. Unless you have a very delicate hand and finger movement, operating it on the move is a challenge, as more often than not the wrong menu button gets selected.

While there’s really very little to complain about the front half of the cabin, the rear is a slightly different story. In contrast to the premium feel, soft touch materials up front, there are some hard plastics trim in the doors that feel like they originated from the Toyota parts bin, with two redeeming features being the LC-sourced door handles and plush leather upholstery, which are the same as those used in the front. 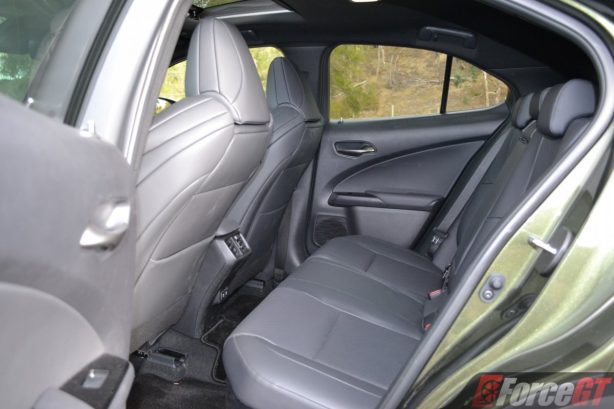 Unlike the front, rear seat space is a premium and especially for anyone over six foot. And while three adults can fit in the back, it’s going to be a tight squeeze. There’re also no bottle holders in the door.

At just 327 litres, the UX’s boot is also the smallest in the segment and by miles considering all its rivals offer 400 litres or more capacity. The hatchback-size boot, however, comes fitted with a nifty tray under the boot floor to hold smaller items, and a handy flexible cover to stretch over and secure odd-shaped loads. There are also the 60:40 split-fold rear seats to expand space further.

The UX line-up is powered by a pair of 2.0-litre four-cylinder petrol engines, with the unit in the hybrid UX 250h version aided by either one or two electric motors – the latter forms what Lexus calls electric all-wheel drive (e-AWD).

The UX 200’s atmospheric four-pot is shared with the Toyota Corolla but generates a smidgen more output at 126kW @ 6,600rpm, accompanied by 205Nm of torque @ 4,800rpm. It’s paired with a CVT automatic equipped with a conventional mechanical take-off gear as also seen in the Toyota Corolla. Drive is channeled exclusively to the front wheels.

Accelerating away from stand still, the one-of-a-kind launch gear does give the feeling of driving a regular torque-converter auto, delivering a linear build up of power and speed. On throttle lift off the CVT’s belts and pulleys take over to give a smooth and jerk-free drive.

While the non-turbocharged 2.0L is down on output compared to its European counterparts, it’s certainly not a slouch by any standards, with it still feeling adequate for whatever the daily grind throws at it and more. It’s just a shame how coarse the engine feels when you put your foot down. Above 4,500rpm, the refinement just isn’t very Lexus-ish, and because that’s where torque is at its peak, the engine loves to hang around there for a long period when you ask for more power. It just doesn’t feel very nice to rev. 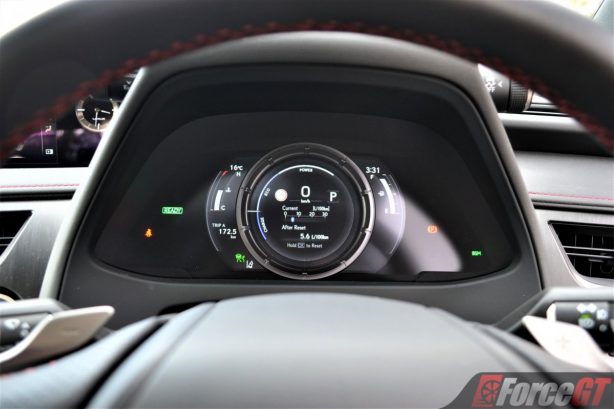 All-wheel drive version of the UX 250h gets a second electric motor at the rear axle and that’s where the rear wheels solely get their propulsion from. This removes the need to have any mechanical linkage between the engine and the rear wheels.

Like the UX 200, the hybrid’s transmission is also a CVT but without the launch gear. Don’t be dismay though, as the hybrid’s CVT can hold at a fixed ratio to deliver the same kind of linear acceleration feel on take-off, before transitioning to continuously variable ratios.

The hybrid drivetrain is surprisingly gutsy, thanks in part to the instant torque provided by the electric motor. And you can forget about everything you knew about hybrids and CVTs, the one in the UX is superbly refined and smooth. There’s no drone from the transmission and the transition between various hybrid drive modes – engine only, engine-electric and electric only – is incredibly seamless.

Perhaps the only unpleasantness is the low frequency hum when the engine kicks in at idle to charge a depleted battery, though this doesn’t often happens as the system self-charges as you drive.

The UX is the first model to be built on the Lexus Global Architecture – C platform, which is designed to excel in handling dynamics, responsiveness, and ride comfort. And I am glad to report that the UX does just that.

It feels light and agile, even fun on twisty back roads. The chassis is communicative, the steering is direct and the underpinnings are taut, I dare say the UX is the sportiest crossover Lexus has ever built. Yet around town, the UX does a tremendous job in soaking up bumps and ruts to serve up an unexpectedly compliant ride. The small Lexus’ ride and handling balance is simply superb. 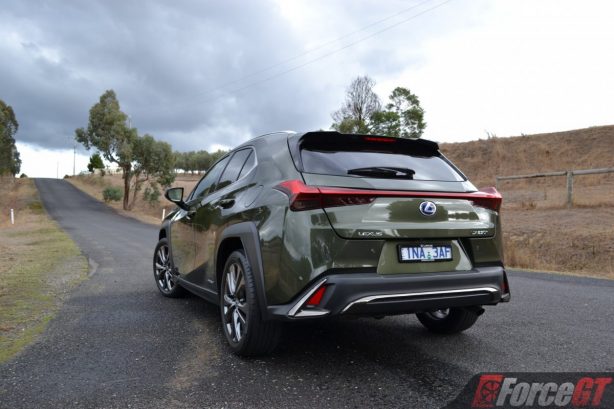 Key to its hatchback-like handling is the claimed lowest centre of gravity of any vehicle in its class thanks to the use of aluminium for the side doors, bonnet and composite materials for the tailgate. Also contributing are the MacPherson strut front suspension and multilink rear suspension with trailing arms, both mounted to subframes and precisely tuned for agility and comfort.

The F Sport gets an Adaptive Variable Suspension and is even more well balanced on varying roads.

The weakest link in terms of driving experience, is perhaps the brake pedal feel in the hybrid. While there’s good initial pedal progression, it turns wooden as you press on. Still, it’s much better than those in previous Lexus hybrid models. 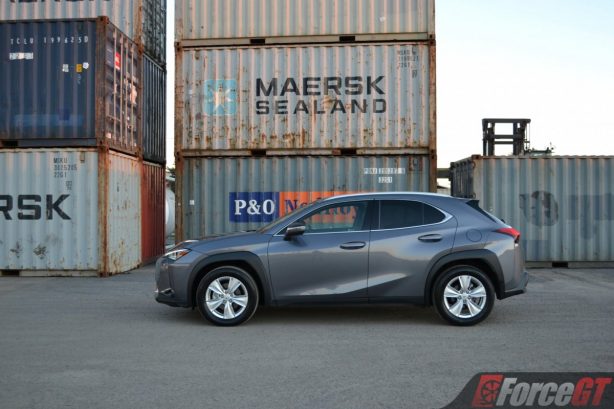 All very good indeed but I find the steering assist function of the Lane Keep Assist isn’t very good at centering the car in the lane, and in doing so feels like it’s constantly fighting you for steering input. The adaptive cruise control is also nervous at times with slow response to a slowing vehicle ahead.

Being a Lexus, the UX benefits from its maker’s four-year/100,000km warranty which is class-leading among luxury marques. Unfortunately, there’s no official capped-price servicing plan to back that peace-of-mind up further, but for the record, it only requires servicing every 12 months or 15,000km. While Lexus has not announced the average cost of service, expect to pay around $600  each time you visit the dealer, if Lexus’ other small cars are of any indication.

Renown for its excellent customer service, Lexus guarantees you a loan car every time your vehicle is in the shop, and will even come to your house or workplace to collect (and drop-off) your car when it’s time for maintenance – something you don’t get from the European brands.

The urban crossover concept is all about style, driving involvement and the latest technologies. And on that brief the new Lexus UX – derived literally from Urban Crossover – has managed to deliver in spades. It’s not without its flaws, but overall it’s one very complete and compelling package that will surely resonate well with the young and young-at-heart.

For over 60 years, the Jeep Wrangler has been synonymous with freedom. The iconic go-anywhere, …