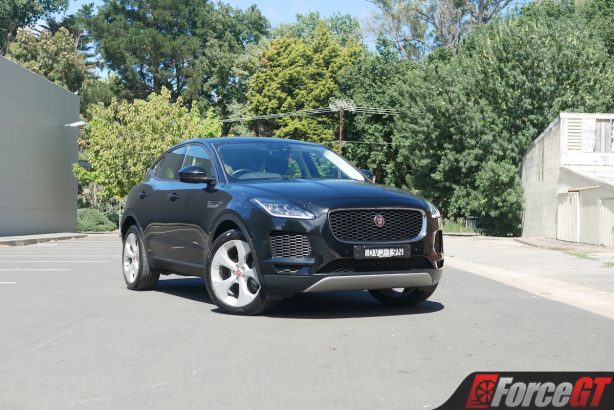 Since its launch, the Jaguar E-Pace has been a bit of an oddity. Lobbing in well after the small SUV segment’s initial boom in the earlier half of the decade, it’s a car that seemed unfashionably late to the party, but was determined to try to steal the spotlight.

It’s a strange sort of vehicle to bear the Jaguar badge too, as even though the F-Pace – the marque’s first SUV – shook up the Jaguar range before it, the E-Pace doesn’t share all that much of the typical Jaguar design language and is the only model based around a transverse engine platform.

None of that stopped us from rather liking the sportier petrol-powered versions of it we’ve sampled before though, with its dynamic abilities and fancy, specced-up interiors managing to win us over.

Now, we’re back behind the wheel of the E-Pace once again, but this time we’ve opted for one of its three diesel engine options – specifically, the mid-level D180 – in top-spec HSE trim, albeit without the R-Dynamic treatment, to see if a diesel engine detracts from its surprising charm. 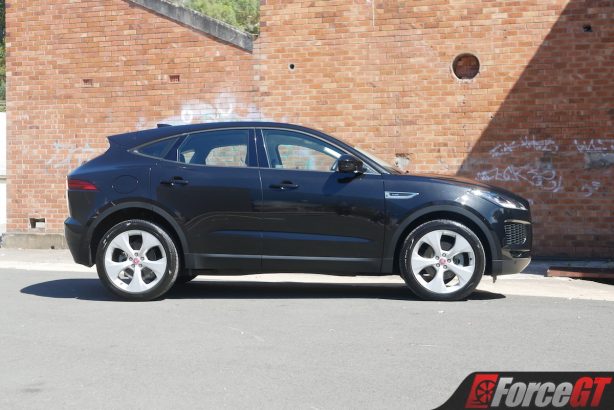 We’ve spoken about the looks of the E-Pace at length before, and nothing really changes here with the standard, non-R-Dynamic version of the top-trim HSE.

As far as the bodywork is concerned, it retains the same cutesy looks as the rest of the E-Pace range, with particularly short overhangs and few of the strong, bold, and aggressive body lines seen on the wider Jaguar lineup. Opting for the HSE R-Dynamic, however, would bring a slightly tougher look, although it’s in the way that a Fox Terrier looks tougher than a Jack Russell. 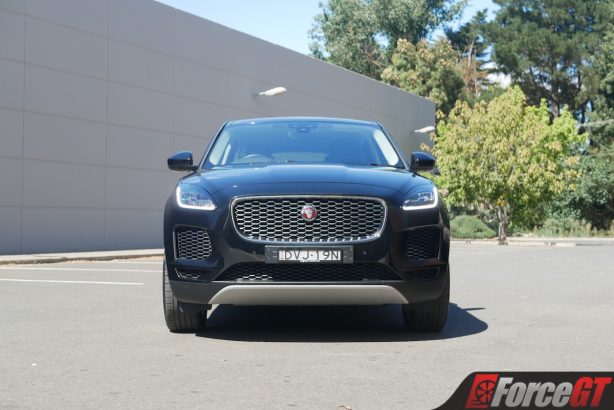 Regardless, there’s no doubting that it is very stylish, and considering the price point and the younger crowd it’s being pitched to, its looks are right on the money in that regard. Overall, its a design that is certainly attractive, but doesn’t particularly exude sportiness a such.

Worth noting is that LED headlights are standard on HSE models, as are the big phone-dial 20-inch alloy wheels fitted to our tester – the standard wheel design being one which it seems you’ll either love or hate – which come clad in JLR-specific Pirelli P Zero rubber. 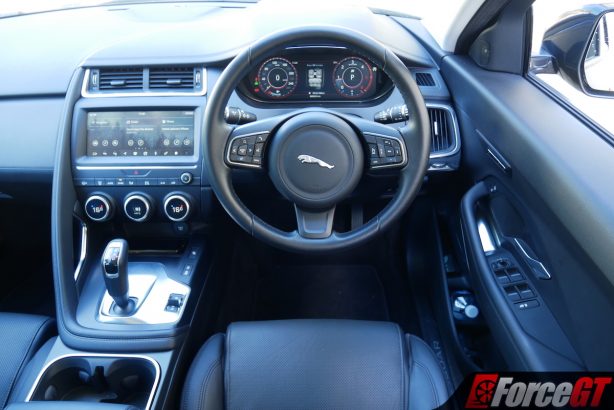 The most pleasant surprise that the interior of the E-Pace delivers is the amount it shares in common with that of the F-Type. Most notably, it’s the sweeping, driver-focused centre console with a useful grab handle for the front passenger; the joystick-like shifter; and the three-dial climate controls that are the most familiar items lifted from Jaguar’s flagship model.

The rest of the dashboard, instruments, and controls are all aimed towards the driver too, with everything falling to hand easily.

All the materials are of a good quality – particularly the perforated Windsor leather on the seats – although the leather on the non-heated steering wheel of our tester didn’t feel nearly as premium as it has on those we’ve tested in the past. 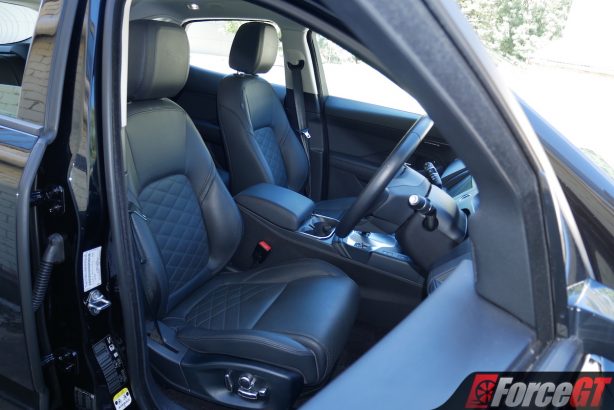 The other complaint I have regarding the interior is that on our nearly-standard tester, it feels a bit… well, boring on the inside. Perhaps it was that the last E-Pace I drove had a stunning Siena Tan leather interior, but ultimately, you’ll want to option it up a bit for it to suit your tastes.

One big positive to note, however, is that 2019 models receive an updated version of the 10-inch JLR InControl Touch Pro infotainment system, which not only sports a cleaner and more-attractive interface, but also adds Apple CarPlay and Android Auto compatibility. 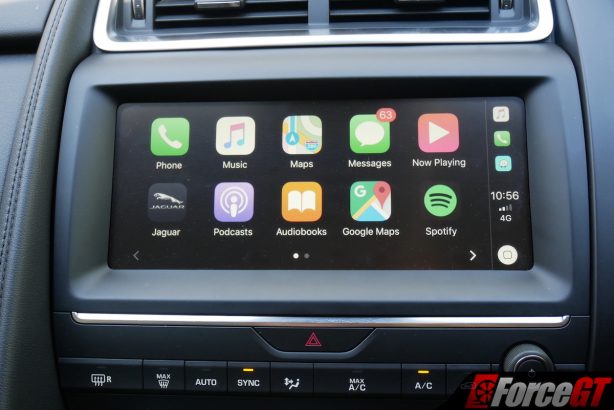 I should point out though that our tester is actually a 2018-build with the updated infotainment system retrofitted to it. But don’t worry about the rest of the car, as all else will remain more-or-less identical for 2019.

Also worth noting is that the 12.3-inch Interactive Driver Display is standard fit on HSE models, whereas it is an option on some lower-tier variants.

Interior comfort is good, with excellent headroom and legroom for both front and rear passengers. We found rear passengers to be particularly pleased with the view from the optional fixed panoramic sunroof, although they weren’t so impressed by the tight and cramped middle seat. Best to think of it as more of a four-seater, then. 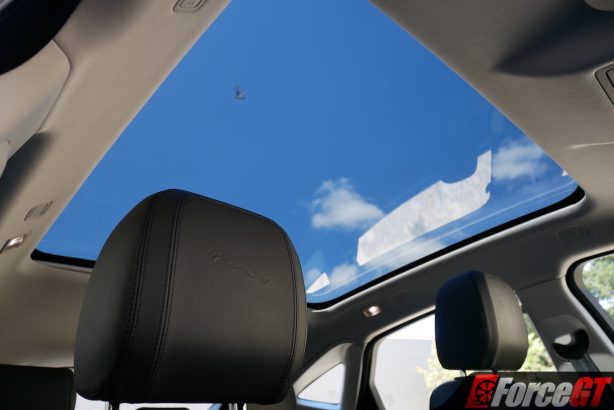 Three diesel engine options are available for the E-Pace, all of which are transversely-mounted 2.0-litre turbocharged four-cylinder units. However, while the D150 and D180 variants – the latter of which we’re testing here – have only one turbocharger strapped to them, the most-powerful D240 unit is twin-turbocharged.

Nonetheless, the single-turbo D180 in question produces a fairly respectable 132kW and 430Nm, and comes paired to a nine-speed automatic transmission sourced from ZF. For the Australian market, part-time all-wheel drive is standard across the range, regardless of trim level or engine choice. 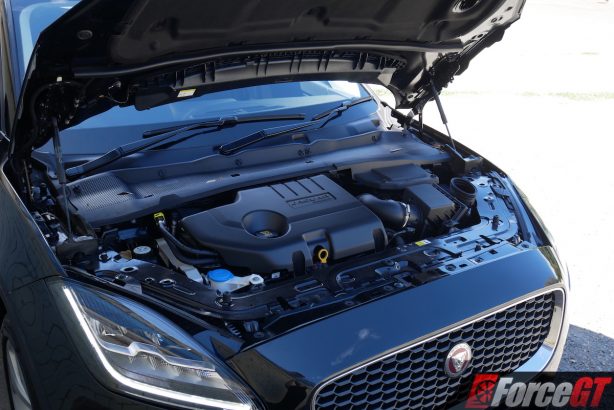 Unfortunately, our fears came true when it was time to hit the road in the diesel E-Pace, as the D180 drivetrain simply isn’t as slick as the petrol versions we’ve tested in the past.

The single-turbo oiler feels too sluggish off the line, and the turbo lag at times is just plain irritating, especially compared to the responsiveness of the more powerful twin-turbocharged D240 mill which we most recently tested in the closely-related Land Rover Discovery Sport.

The nine-speed auto doesn’t do it any favours either, as while it may be quick to shift when commanded to, it feels dim-witted when left to its own devices during everyday driving, and it offering nine ratios rather than the eight of every other Jag is a case of too many cooks spoiling the broth, as it has just one gear too many for slick and unconfused operation. 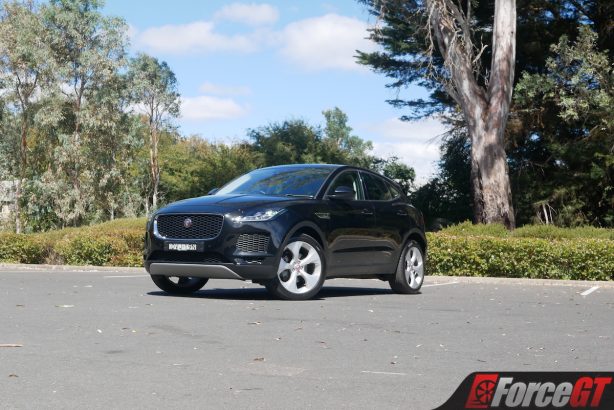 Not all’s bad, however, with the D180, as when put into Dynamic mode with the transmission in its sport setting, it offers up decent performance for a platform not aimed at performance motoring, with a punchy top-end to the diesel donk and fairly crisp shifts from the ZF 9HP transmission at full-chat.

It handles fairly well in most conditions too, with the standard P Zero tyres offering decent grip, and the weighty steering feeling solid and allowing for good levels of input. It remains surprisingly flat through the bends as well, not exhibiting the body roll often associated with SUVs.

But it’s not without its woes in the handling department, as with a steel unibody chassis, rather than aluminium, this Jag is one fat cat, tipping the scales at 1,843kg in this configuration. Even entertain the thought of really giving it the beans and it will start to step out wide, its front-heavy dynamics being clearly exposed as you can feel every single one of those kilos. 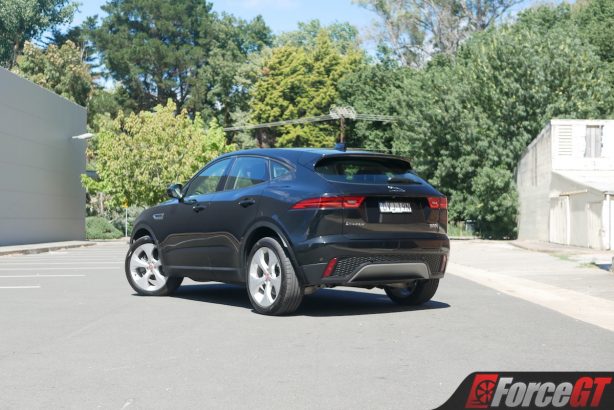 On roads like those we tested it on around the Adelaide Hills – which is to say, very poorly maintained – the suspension gets far too firm and bouncy in Dynamic mode, particularly in the rear. Thankfully, then, it handles well enough and rides smoothly enough in Comfort for how most customers will drive it, so its best to just leave the drive modes alone.

It is appreciably comfortable and quiet when everything’s left in its standard configurations though, with the fairly frugal diesel feeling at its best when on the cruise. For long distance driving, then, it feels perfectly suited with this frugal but still powerful-enough diesel, but for performance-oriented driving you’ll be best to look into the petrol side of the range. 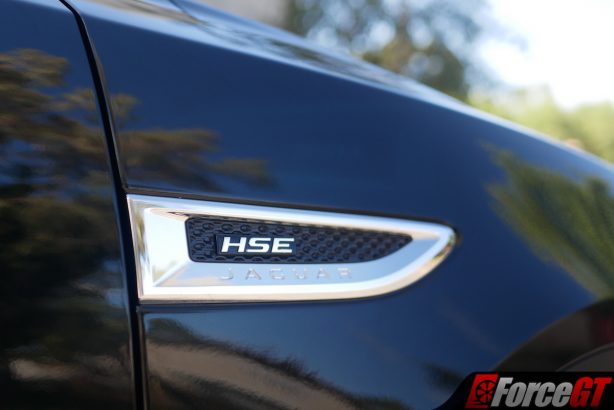 While there’s no doubt that the E-Pace is a good-looker and offers surprisingly good dynamics for an SUV, it’s ultimately at its best when fitted with the potent P300 petrol power plant under the bonnet.

While the D180 makes a great case for itself with its commendable fuel efficiency and relaxed feel at higher speeds, it feels laggy and lethargic off the line and around town. It’s also a heavy unit that introduces some fun-spoiling understeer, detracting from the E-Pace’s otherwise commendable dynamics.

Our recommendation, then, would be to stick with petrol power and opt for an R-Dynamic variant if performance is of concern, while if your mind is set on diesel, it would be worth considering the step up to the twin-turbo oiler instead.