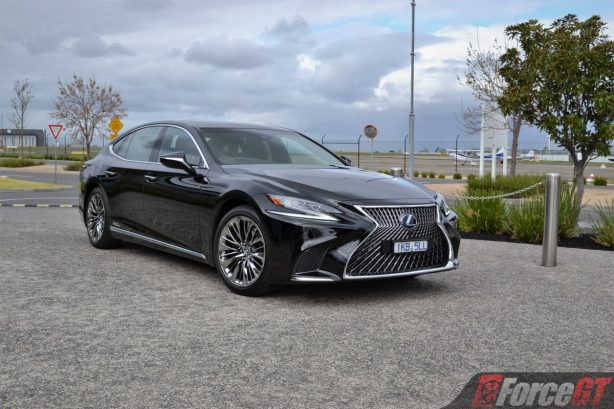 The year was 1983. The top brass of Toyota Motor Corporation were gathering in the board room at the company’s global headquarters in Toyota City, Japan. In the tensed meeting room, a challenge was issued by founder Eiji Toyoda. It’s called “Flagship One” and the goal was simple – to create an ambitious new luxury vehicle that would outshine the world’s best. It was a daunting task for all the designers, engineers and technicians that had gathered in that room that day.

Several ground rules were laid. This new sedan needed to crest 250km/h, while consuming less than 10.5L/100km of fuel. It had to be super quiet, with noise levels not allowed to go over 60 decibels at 96km/h. Finally, it had to display a supercar-beating low drag coefficient of just 0.29. Not one vehicle at the time was able to achieve all those benchmarks at once.

In other words, this car that Toyota was going to build must knock the socks off all its rivals. It was to signal the start of a new era for the luxury segment and the brand. It was to be the best Japan had to offer.

Six years, a billion dollars and 450 prototypes later, Lexus was launched as the new luxury sub-brand of Toyota and the LS – stands simply for Luxury Sedan – was born. 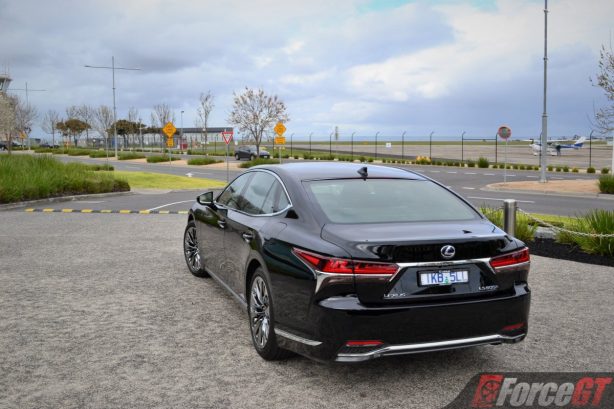 1989 was the year that kick started Lexus. It was when the status quo in the premium space shifted and car manufacturing processes changed for good. The Lexus LS 400 was well ahead of its time, sporting breakthroughs like automatic tilt-and-telescope steering wheel, holographic, electro-luminescent gauges, electric memory seating, an electrochromic rear-view mirror and vibration-insulating rubber mounts.

It was the quietest, most refined and most well-built luxury sedan in its class. Backed by what was and has been widely regarded as the industry’s best customer service experience, Lexus found success and the Mercedes-Benz S-Class was in trouble. 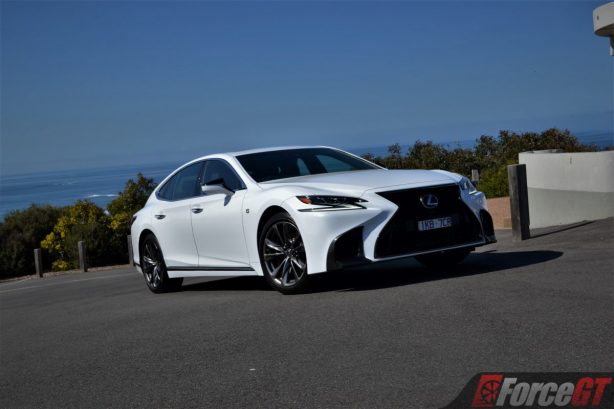 29 years on and after four iterations of the original car, Lexus has once again set out to build a redefining flagship sedan. And at first glance, it feels like 1989 all over again, albeit for its sheet metal rather than the stuff underneath it. The new LS is proof that a large limo does not have to look boring. The brand has been playing with bold and emotion-stirring designs for a while now, and the new LS is the epitome of Lexus’ modern design expression.

From that big and incredibly intricate spindle grille – a painstaking six-month design process – to the perfectly flush-fitting side windows, the LS can even be described as sexy – a word we have never previously used on a large luxury sedan. There are other interesting details such as the Z-shaped headlights that look like they have been carved using a samurai word, body surfacing that sets the car in motion even while it’s stationary, and L-obsessed taillights that take 3D lighting to the next level.

With a low-slung, coupe-like silhouette, the LS looks imposing yet sleek, authoritative yet amicable. A Mercedes-Benz S-Class or BMW 7 Series would look quite bland next to the Lexus. 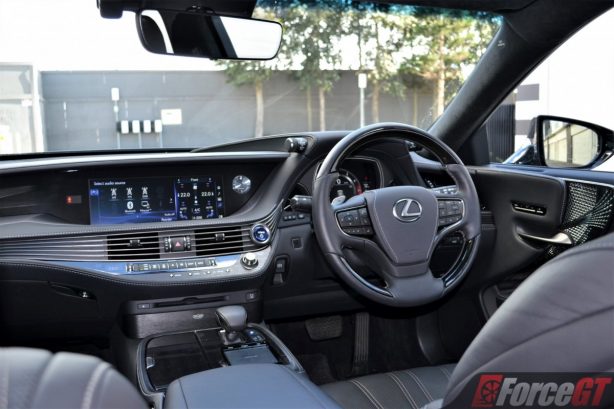 The interior is no less interesting either. While Lexus went to great length to ensure the original LS’ interior suited Western taste and feel – right down to the smell of the leather and softness of the seat cushion, the new car’s cabin is authentically Japanese. The ambient lighting is inspired by Japanese Andon lanterns and cleverly positioned such that the armrests appear to float next to the door panel, while the exquisite Shimamoku wood trim is created using Japan’s elaborate sliced wood and laser-cutting manufacturing processes.

Elsewhere, highly detailed Kiriko cut-glass ornamentations on the door trim are worthy of a place in an art gallery, while the dramatic hand-pleated upholstery follows the delicate process of Origami – the Japanese art of folding paper into decorative shapes.

It’s this kind of artistry and attention to detail – usually the reserves of Bentley’s and Rolls Royce’s – that distinguish the Lexus interior from the more business-like themes of those of its German rivals. 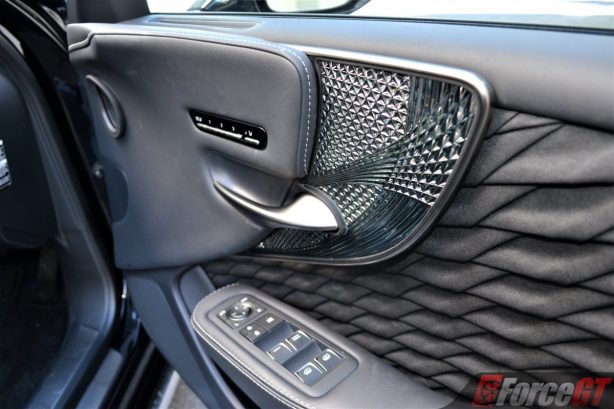 It doesn’t stop there as the Lexus boffins have even thought about how the car should greet the driver on approach. As you unlock the car, a welcome sequence raises the low-slung sedan’s ride height to an ideal hip height, opens out the seat bolster, and extends out the seatbelt buckle. The sequence repeats at your destination.

Once on board, finding a comfortable driving position is a breeze as the front seats can be power adjusted in 28 ways and include massage functions. For those lucky enough to be chauffeured around in the back seats (which are most LS owners), the Shiatsu massaging function in the Sport Luxury trim extends to three full-body programs (Refresh, Stretch and Simple) and four that target specific areas (Upper Body, Lower Body, Shoulder, and Lumbar), made better with world’s first spot heaters that warm specific areas of the body.

When unoccupied, the front passenger seat can even be moved forward to increase rear legroom and make way for a raised ottoman. With the seat back fully reclined, you can truly stretch out in the back. Now that’s first-class. 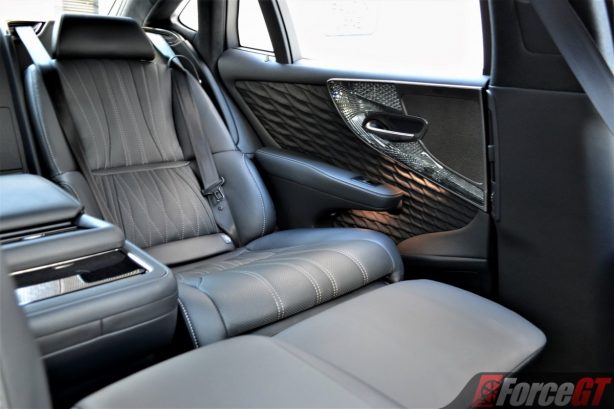 What isn’t is Lexus’ controversial Remote Touch Interface for the infotainment. While the touch pad is larger in the LS, the pointer still has the tendency to slip past your selection, particularly when you are operating it on the move. The menu structure is also rather messy.

The LS’ gigantic 24-inch colour heads-up display is the world’s largest, but the information it serves up is the usual stuff we have seen before. Granted, it’s a great piece of tech and the real estate is certainly there, but other than oversized speed readouts and sat-nav instructions, there isn’t anything new.

We also find the infotainment embedded climate control functions rather inconvenient and the automatic seat heating/cooling feature would activate even without an occupant onboard. As a $200k flagship, a manual sliding sunroof shade (as opposed to powered) is also grim. 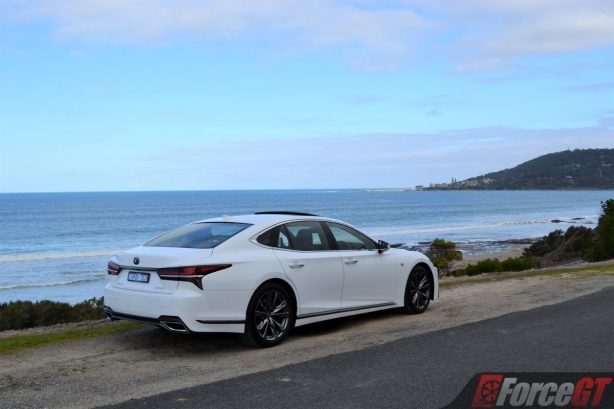 While the in-car interfaces still have room for improvement, Lexus has definitely hit the mark with the new twin-turbo 3.5-ltire V6 in the LS 500. Developing 310kW and 600Nm, it is without doubt the most refined bent six we have ever sampled, silky smooth across the rev range and ultra quiet at idle.

Power delivery is superbly linear for a turbo mill, too. You won’t miss the old atmospheric V8 because this new engine is just as responsive, and with the added torque, it’s capable of even stronger acceleration – hauling the 2-tonne sedan from standstill to 100km/h in just 5 seconds.

It never feels quite as quick though due to the lack of aural drama (even in Sport modes with noise piped into the cabin), but it doesn’t have to in this segment – it’s no sports car.

The new ten-speed automatic transmission – the first in the premium space – is another winner, dishing out smooth and quick gear changes, which also occur at precisely the right time. The ratios are spread perfectly and never feel too many. Cruising at 100km/h in top gear the engine is barely idling at 1300rpm.

It’s a cracking drivetrain, one that we hope would filter down to future Lexus models. 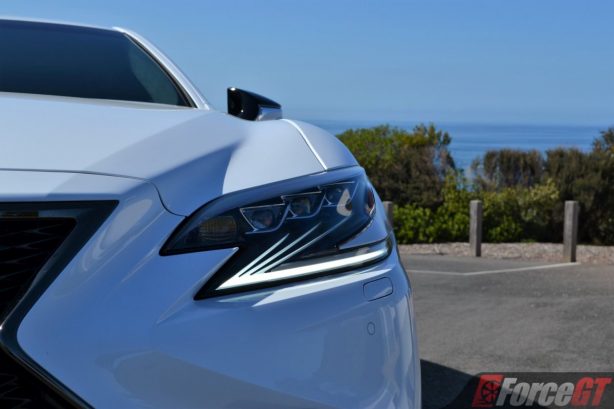 The LS 500h gets the same petrol-electric hybrid powertrain found in the LC hybrid. The so-called Multi-Stage Hybrid drivetrain consists a 3.5-litre V6 petrol engine assisted by an electric motor that gets its energy from a lithium-ion battery pack and a 4-speed/CVT combo that mimics a conventional 10-speed auto.

Combined, the total output of 264kW and 350Nm seem like a big deficit from the LS 500’s V6 turbo but getting off the line is still slick and acceleration at speed is strong thanks to the instant torque from the electric motor. The dash from 0 to 100km/h is only a tad slower at 5.4 seconds.

Driven sedately, you’d be hard pressed to call the ‘virtual’ gears from the real ones as the shifts are smooth, crisp and lacking the ‘rubber band’ effect of CVT. It’s only when you plant your foot down that you start to feel a bit of that CVT elasticity, as the revs dances around the optimum powerband to enable the quickest acceleration. The accompanying soundtrack is also not the sweetest as the V6 (different engine to the V6 turbo) sounds stressed at the top end. 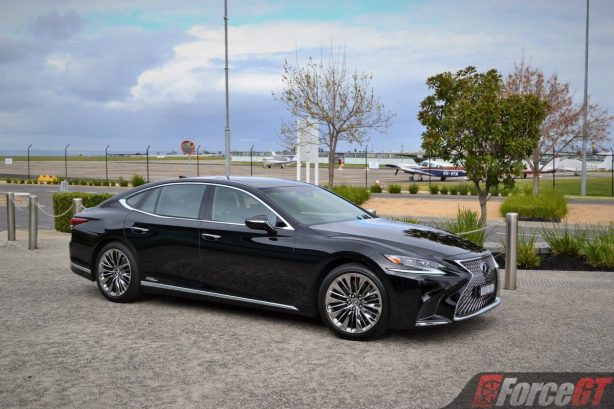 Regardless of the powertrain, the LS is an extremely relaxing car to drive around town, thanks to a supremely quiet cabin and an expertly damped ride.

And if you (or your chauffeur) fancy a blast up the hills, it won’t disappoint either. Despite it’s sheer size and weight, it drives like a much smaller car thanks to a rigid chassis and near perfect 50:50 weight distribution. Turn in is sharp, body control is tight and the rear-wheel drive layout gives a sense of neutral handling.

The new lightweight, high strength GA-L (Global Architecture – Luxury) platform that underpins the LS truly delivers the goods and Lexus has done a commendable job in honing the dynamic abilities of its flagship.

The steering is precise, perfectly weighted and surprisingly communicative for an electric rack. The brakes are strong and nicely progressive.

F-Sport trim adds an active rear stabiliser bar, larger brakes and four-wheel steering, along with a sportier tune of vehicle stability program for even sharper handling.

It must be said that the hybrid version is less exciting than the turbo V6 though, as the layer of CVT/electric assistant somewhat detaches you from the drive. 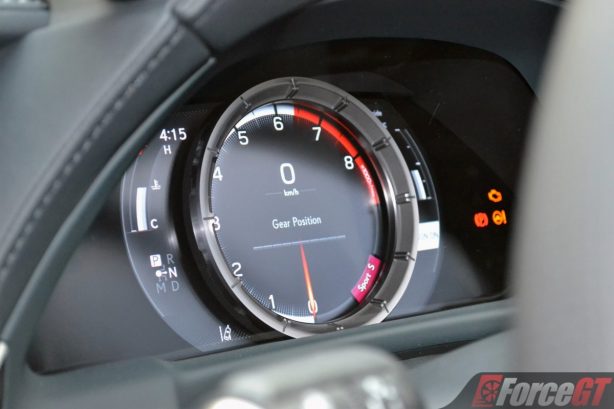 As expected, the greener version does fair better in fuel economy, recording 10L/100km at the end of our week-long test, against the turbo V6’s 12.0L/100km. The gap between the two is far larger on paper, with Lexus claiming 6.6L/100km for the hybrid and 9.5L/100km for the turbo.

While not quite fully autonomous (yet), the LS comes with the full fruit of driver assistance aids, including lane-keep steering assist, active radar cruise control, and traffic sign recognition. There’s also the world’s first pedestrian detection and avoidance system in which the car can automatically brake and steer around a person while staying in the lane.

The original LS introduced Lexus to the world. The new LS gives Lexus an identity. While not as game changing as the first car, the latest model is the boldest, most emotional and most engaging in the nameplate’s 30-year history.

And as far as flagship sedan goes, the LS is right up there with the best. While it’s far from being the segment’s technology powerhouse, it sure brings unrivaled craftsmanship, standard features and reliability, which, along with the industry’s best customer service, are essentially what this brand is all about.