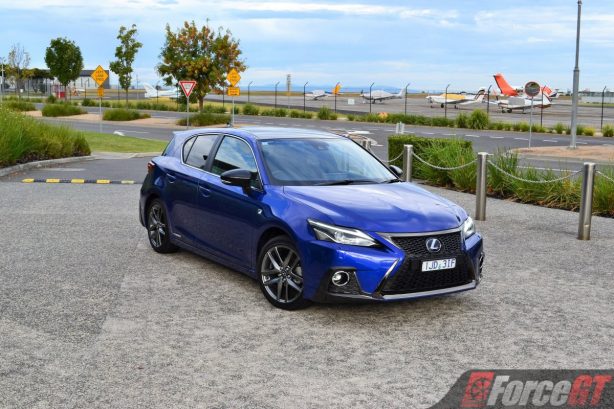 The Lexus CT hybrid hatch has undergone its most extensive update yet since its debut in 2011. It ought to as the eight-year old model soldiers on as Lexus’ most affordable offering without a new-generation model anywhere in sight. Against a backdrop of booming compact premium car sales, with models like the Mercedes-Benz A-Class a runaway success and the Audi A3 not far off its back, Lexus is counting on this latest update to ensure the CT remain competitive in this fast moving marketplace. And if the recently refreshed BMW 1 Series is of any indication, an update done right can really turn things around.

With the brand’s trademark spindle grille already adorning the CT’s fascia since an earlier update in 2014, Lexus’ focus this time around is to inject a bit more personality into the rest of the hatchback to tie in with that bold grille, which has also been slightly tweaked.

The new tailgate garnish that envelops the Lexus emblem between the rear glass and the taillights has been pinched further outwards, adding to the sporty look. 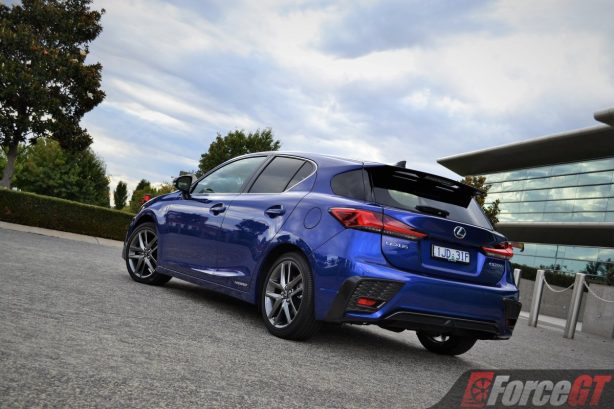 Slotting in between the Luxury and Sports Luxury in the CT line-up is the F Sport, which now has an even greater emphasis on black highlights to reinforce its status as the sports-focused variant. It features a new black mesh pattern for the spindle grille, dark chrome spindle surrounds, black mirror caps and exclusive F Sport lower front and rear bumper.

F Sport and Sports Luxury gain Bi-LED headlamps while their “arrowhead” daytime running lights have been repositioned above the single-projector headlamps.

Spicing up the CT 200h’s profile, the Luxury grade’s 16-inch wheels feature a new design with a black centre cap while the 17-inch F Sport wheel is freshened with a dark metallic finish. 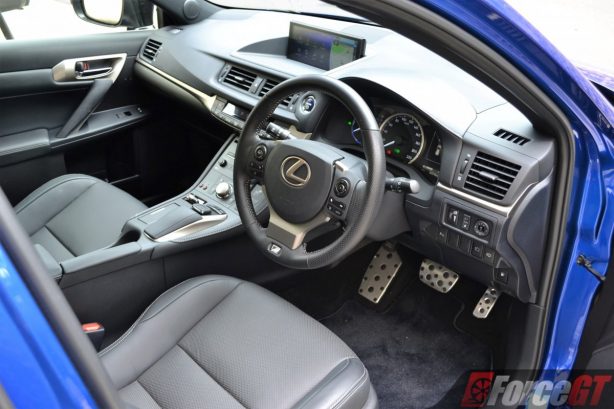 Inside, the CT’s cabin is starting to show its age through dated switchgear and design but nevertheless, features a new 10.3-inch display screen for the infotainment system, replacing the previous 7-inch screen. The new infotainment screen is a whole lot more advanced than the old unit both in terms of presentation and usability, though it still misses out on Apple CarPlay and Android Auto.

The control for the screen also can’t compare with BMW’s excellent iDrive or Audi’s superb MMI. While Lexus’ other models have adopted a new, much easier to use (but still odd) touch-pad control for the infotainment system, the CT is still stuck with the old fiddly joystick-like control. It just doesn’t do the new screen justice with its clumsy and imprecise button selection.

Another area in need of urgent revamp is the instrumentation panel. While it has been slightly updated it just doesn’t look that premium with its bland design and reflective plastic cover. The same can be said for the powered driver seat memory buttons which sit on slab of plastic on the upper door trim. It just doesn’t feel like it belong to a premium car. 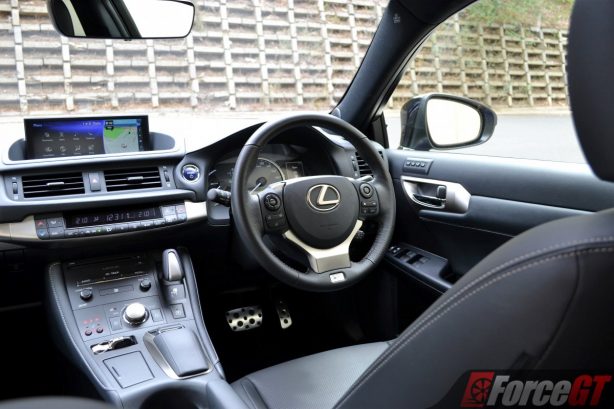 The rest of the interior is carried over from the pre-update model and it isn’t necessarily a bad thing. The seats are sumptuously comfortable, the small steering wheel is nice to hold and general ergonomics are very good.

Accommodation up front is fine with adequate head and legroom and a good number of storage compartments but passengers at the back will not appreciate the tight legroom and lack of rear air-con vents, cup holders and door pockets.

Further aback, the 375 litres of boot space is 15 litres more than that in the BMW 1 Series and 95 litres larger than that in the Audi A3 e-tron (the CT’s closest rival). Drop the rear seats though and the table is turned around with the Lexus’ 985 litres trailing both the BMW’s 1,200 litres and the Audi’s 1,120 litres.

Perhaps, what really impresses is the CT’s build quality. Lexus is well known for its extremely high standard in fit and finish and this entry-level model is no exception. Panel gaps are minuscule and alignments are faultless. The quality of the exterior paint work is also the best we have seen in this class, with thick and super high gloss paint draping the car from bumper to bumper. 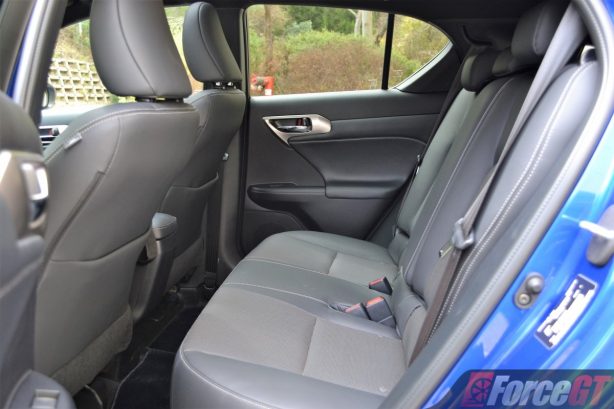 The 2018 CT 200h continues to utilise the company’s widely used Hybrid Drive system, consisting of a 1.8-litre four-cylinder 73kW/142Nm petrol engine paired with a 60kW/207Nm electric motor that gets its power from a nickel-metal hydride battery array. Combined, they channel 100kW and 207Nm to the front wheels through a continuously variable transmission (CVT). If this sounds familiar that’s because this is the same powertrain found in the Toyota Prius.

Compared to its rivals, the CT’s performance can be described as dull at best, even with the drive mode set to Sport. Not surprising as primarily the CT is designed to squeeze every drop of fuel into kilometre.

It’s just not particularly pulsating when you put your foot down, despite Lexus’ best attempt to inject some sportiness into its sole hybrid hatch. Unlike modern CVTs found in numerous new cars in the market today, the one in the CT still has that rubber band feel (revs flare that is disproportionate to acceleration) that numbs the driving experience. 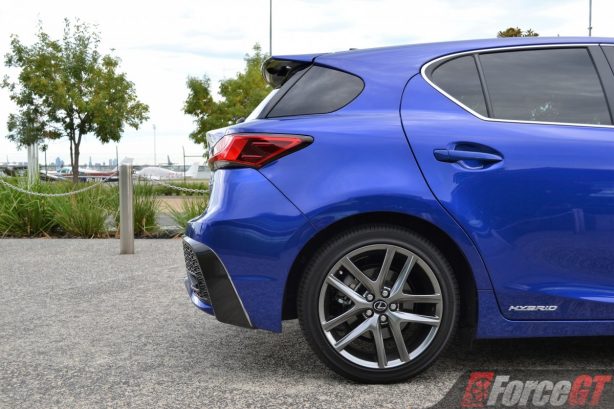 Treat the CT as an economical cruiser and the Lexus starts to make a lot more sense. City driving is very relaxed and refined thanks to the linear torque provided by the electric assist motor. Rolling off in the CT, battery power provides the initial noiseless propulsion during light acceleration. As more power is needed, the petrol engine kicks in so both power sources work together for added acceleration.

The transition from pure electric power to petrol-electric is imperceptibly seamless. There is barely a hint when the engine kicks in. Coupled with the CVT, the drive around town is amazingly quiet, leisurely and smooth.

The CT handles well, too, for a hybrid. A stiffer chassis and re-tuned suspension was part of an update in 2014 and these changes have significantly improved the CT’s ride and handling balance. Turn in is sharp with good grip and composure to keep the eco hatch on its intended course. It feels relatively well balanced for a front-wheel driven car thanks in part to the battery mounted just above the rear axle aiding front to rear weight distribution.

The steering is precise, too, although the weightage is largely artificial in Sport mode. Elsewhere, the standard suspension offers remarkable ride quality without feeling too firm or too floaty.

At cruising speeds, the petrol engine is the main drive with the electric motor supplementing when more power is called for. Each time you lift off the throttle or apply the brakes, regenerative braking technology harvests the otherwise wasted energy to recharge the batteries. Clever tech, but the trade off is an inconsistent and numb braking feel, as with typical hybrids.

Befitting its eco-friendly image, the CT 200h’s fuel economy is impressive. Our week spent with the F Sport saw the trip computer returned an average of 5.2L/100km with equal split of urban and freeway plus a dose of spirited driving. Cruising on the freeway the figure hovers around a low 4.0L/100km. 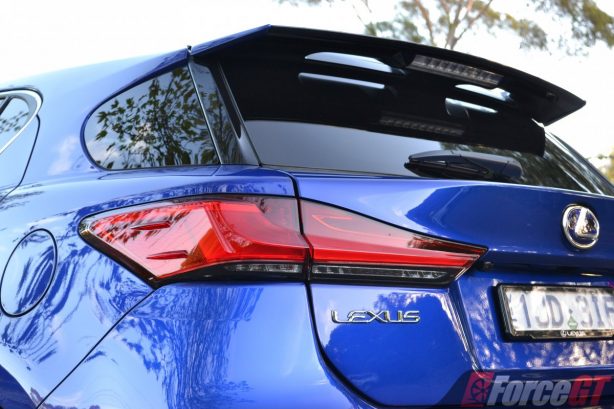 The 2018 Lexus CT 200h remains a stylish, comfortable and economical hybrid hatch suited to city lifestyle, that is if you can live with an aging interior and a dull drivetrain. For some that might fit the bill just fine but for those looking for a sportier drive and more up to date features they might find better, comparatively priced alternatives under the BMW/Mercedes/Audi banner.

Here’s hoping that a new replacement model isn’t too far away and if the recently unveiled Lexus UX compact crossover is of any indication, the new CT – which will be closely based on the UX – will be the one to look out for.