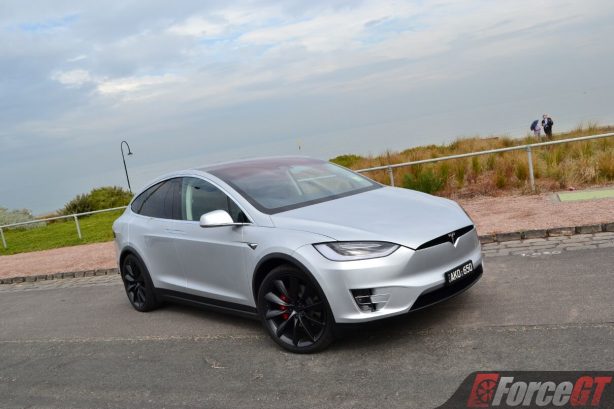 The world’s fastest SUV is not a Porsche or a Range Rover or a BMW. It’s a Tesla Model X. Like its sedan sibling, the Model S, which leaves everything but 8 supercars in the world in the dust sprinting to 100km/h, the Model X takes performance SUV to a completely new level.

It’s the second Tesla model to launch in Australia and we wasted no time, strapping ourselves straight into the range-topping P100D, which as its name denotes, comes equipped with a 100kWh battery pack. Powered by dual electric motors – a 375kW motor driving the rear axle and a smaller 193kW unit propelling the front axle – the P100D essentially gets all-wheel drive. Combined the two motors produce a potent 397kW, accompanied by a colossal 967Nm of torque.

The battery-electric drivetrain translates to 2,537kg of curb weight, which is pretty hefty, or a 0 to 100km/h acceleration time of 3.1 seconds, which is simply Ludicrous – the exact name given to its Performance driving mode. Appropriately. 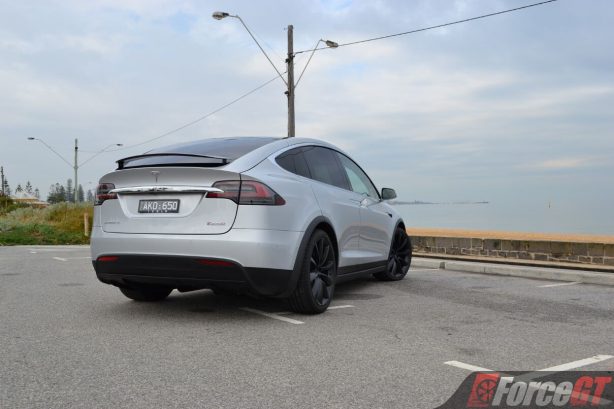 The way this thing gets off the line and eats up the tarmac is like no SUV we have experienced in the past. It’s savage, to say the least, pinning you back to your seat like a launched roller coaster. To put it into perspective, the Tesla Model X P100D demolishes the century sprint quicker than the Audi R8, Lamborghini Huracan and Mercedes-AMG GT.

And if this is still not enough to get your adrenaline going, there’s a hidden mode (one of Tesla’s “Easter Eggs”) called Ludicrous+ that will further shave about 0.1 second off the 0-100km/h time. You access it by pressing and holding the Ludicrous mode button on the centre touchscreen. After a few seconds the screen will change and prompt for your confirmation, in a rather funny way. Once given the go ahead the battery will self heat to an optimum temperature where its energy can be released at the fastest rate.

We tested it, of course, and it stopped our clock 0.059s sooner. Not much, but hey, it’s another cool thing to tell your mates who drive Ferraris and Porsches, right? 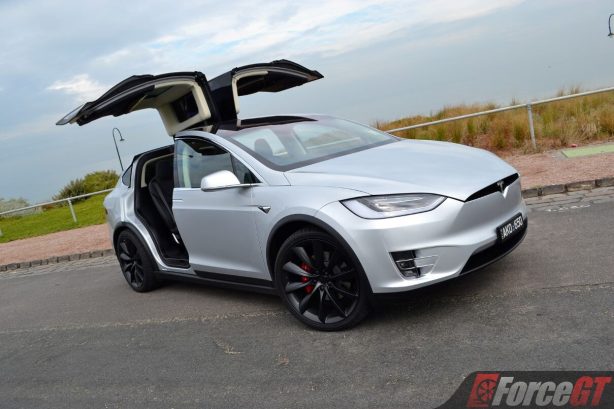 The reason for this stupendous acceleration is simple – instant torque. This means all 967Nm of torque is dropped on the axles as soon as you flatten the throttle, no delay. It’s the characteristic of electric motor, you get the full whack of torque right from the get go.

All this does come at a premium. The P100D checks in at $211,200 plus on-road costs. Add up the essential options and you’ll be looking around the $260k mark. The one we have on test here has been optioned up to the brim and costs a whopping $332,561 by the time you drive it on the road.

If you don’t need the performance and the range, you can choose from the Model X’s three other lesser variants – the 75D, 90D, 100D, each denoting a trim level as well as the output of the battery pack. But mind you, even the base 75D comes in at $125,000 plus ORCs. 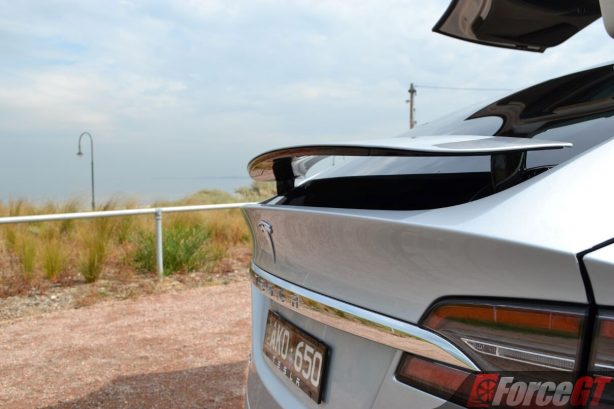 Depending on how you drive, the P100D is capable of up to 565 km in range from a single charge. Charging the Model X is as easy as charging your mobile phone. One end of the charge lead connects to the car and the other end plugs into any power socket in your home. A full charge through a domestic 10A outlet will take north of 6 hours, but at a Tesla Supercharger charge point and a full replenish takes just 50 minutes. 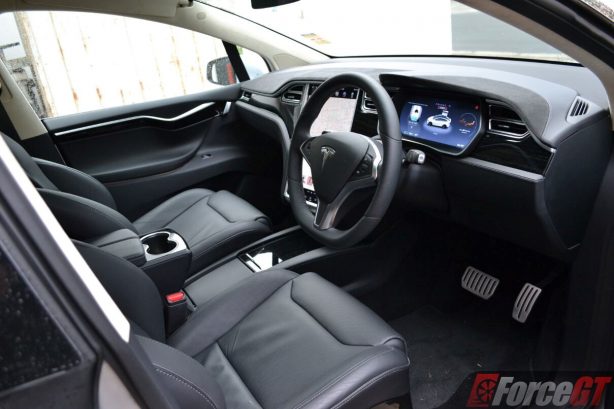 Dynamically, the Model X delivers competent handling and superb all-wheel drive grip. It’s a heavy car but smart designs result in a 49:51 front:rear weight distribution, which aids big time in responses. In corners, the Tesla feels neutral and a lot lighter than it actually is. There’s mild understeer when you get close to its limits but it’s easily managed by just backing off a little. Because of its heft, mid-corner bumps are barely an issue.

The steering is adequately weighted but, like the pedals, feels numb and disconnected. The brakes bite hard under heavy braking but tend to be a bit inconsistent in normal driving.

As expected from a full electric vehicle, the Model X is whisper quiet and the overall refinement is unreal. Because there are no firing cylinders, no intake or exhaust gases, not even gears, the electric drivetrain delivers the kind of tranquillity and serenity not found in any other cars we have driven before. At any speed, the most you would get is wind and road noise, which is remarkably well suppressed, though the optional 22-inch rollers like the ones fitted to our test car do spin up slightly more road noise than smaller wheels. 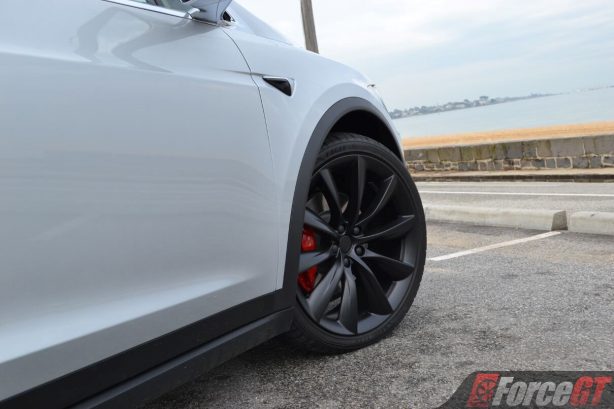 The ride is firm, yet comfortable and smooth across all but the roughest surfaces. Seating for five is standard or two extra passengers can be accommodated with the seven seat option. There are ample of space in the front and the second row is comfortable and supportive enough for three adults, which will no doubt appreciate the individual seat adjustment. Access to the third row is generous thanks to the two outboard second row seats that slide forward and upward at the push of a button. The third row seats are tight in leg and headroom, however, which means they are only good for adults on short trips or small children. With air suspension, the car can also be lowered for easier ingress.

One drawback of seven seating is that you can’t fold the second row seats to make more cargo space. In five seat version, tumbling the second row liberates a sizeable 2180 litres of cargo capacity. The boot is flat but hampered by the sloping roof line. Happily, there’s a second boot under the bonnet if you require more space. 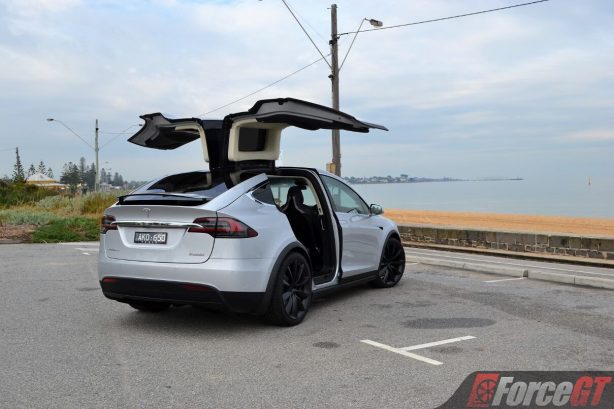 Heavily derived from the Model S sedan, the Model X is a handsome car from all angles, but the coolest thing about it is no doubt the pair of power actuated Falcon Wing rear doors that swing upward at the press of a button, one located on the door edge for use when the door is raised and the other in the B pillar for operating from the inside.

It’s the coolest thing we have ever seen in a SUV. Don’t be surprised to pull a crowd when you have them opened in a busy supermarket parking lot. And if you’re concerned about safety there are sensors on the door to stop it from hitting you or objects around it. The doors are hinged above the glass so they can even fold automatically as they rise, avoiding parked cars or walls in tight spaces. Very clever. 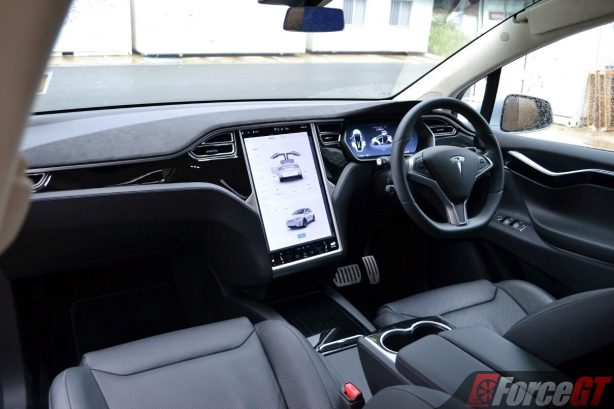 Step inside and the first thing you would notice is the vast windscreen, claimed to be the world’s largest in a production car. Forward visibility is excellent though the peak through the rear is limited due to the raised rear deck and small rear windscreen. The space age interior radiates a unique vibe of luxury, it’s a great to place to be in. Figured Ash Wood trim divides the dash and finds its way onto the doors, while black leather seats and light headliner further elevate premium cabin ambience.

Central to the spacious cabin is of course the centre touch screen which looks like a sized-up iPad. Everything, and I mean everything, is controlled through this screen, including the sunroof, headlights and the release for the boot.

The high resolution touch screen is very easy to use, at least to tech freaks like us. Google maps show up the entire 17 inch screen if you wish. You can pan, swipe and pinch on the screen just like you would with your smart phone. With a sim card, you can also stream your favourite music from Spotify. 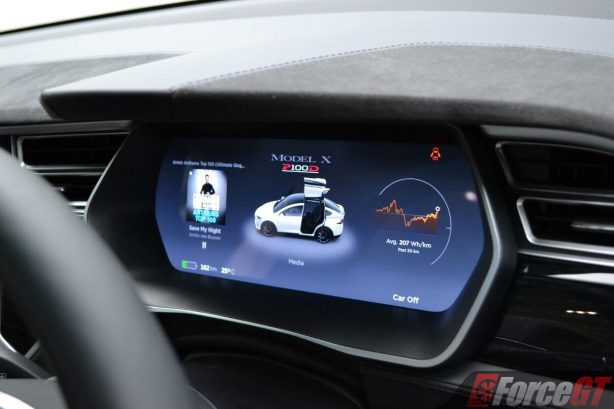 At the time of this review, Tesla’s local fleet of Model Xs is still undergoing “Fleet Learning”, where the vehicles will “learn” driving patterns in confusing situation – such as approaching an overhead highway road sign positioned on a rise in the road or a bridge where the road dips underneath. The information will then be uploaded to the Tesla database and used by the Enhanced Autopilot software, Tesla’s next generation semi-autonomous driving feature.

Objectively speaking, the Tesla Model X is in a class of its own. Being the only full electric SUV available now, it has no real competitors. And despite recent offerings from the Porsche/AMG/M stable, the Tesla remains the world’s fastest SUV, what’s more with efficiency and practicality to match. Time to switch to electric? If only the asking price was lower. Bring on the Model 3.